Analysis: What will freedom of expression look like post-Charlie Hebdo? 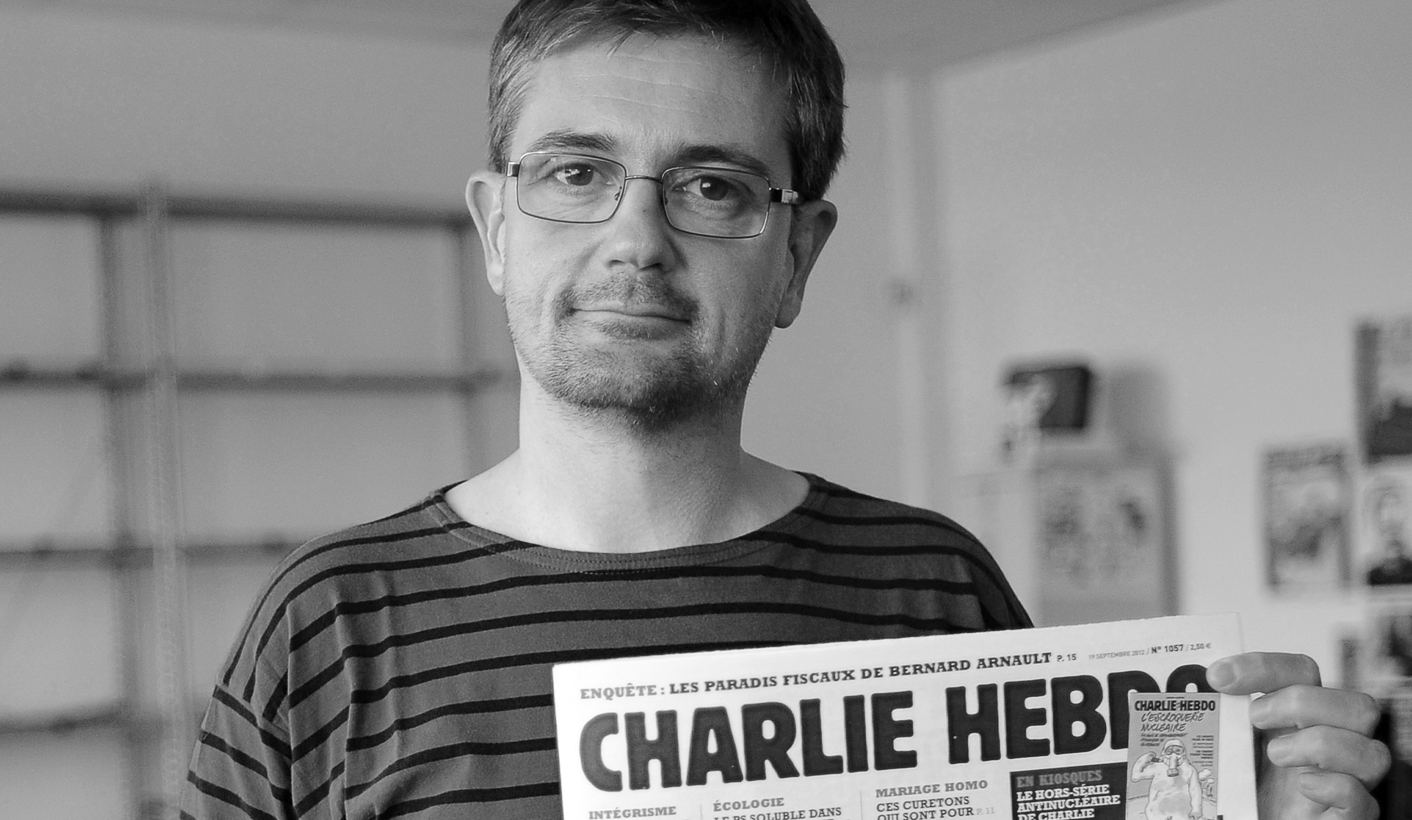 Wednesday’s deadly attack on French satirical newspaper Charlie Hebdo forces publishers and media practitioners worldwide to consider how far they are willing to go to uphold freedom of expression. REBECCA DAVIS spoke to South African editors, and the country’s most famous cartoonist, to find out whether the Charlie Hebdo attack would make them less likely to take risks with provocative content in future.

Ferial Haffajee has first-hand experience of publishing a cartoon featuring the image of the Prophet Muhammad – and dealing with the fallout.

In 2006, as the erstwhile Mail & Guardian editor, Haffajee made the decision to print one of the controversial Danish cartoons that had prompted global protest. Looking back from her current perspective as City Press editor, Haffajee explains that the choice was not made in a deliberately provocative manner.

“It happened late on a Thursday afternoon. [The cartoon controversy] was a developing international story, and we needed something to illustrate it,” she recalled to the Daily Maverick on Thursday. “It was not done in the same spirit [as Charlie Hebdo], to thumb our nose at Muslims.”

The intention behind its publication became irrelevant, however. Haffajee received threats, many of them very personal. Pressure was placed on her elderly mother. A chain mail circulated with an instruction to kill her. “That was the thing that was most scary,” she says now. “And I don’t scare easily.”

In the judgment in favour of Jamiatul Ulama, high court Judge Mohamed Jajbhay (since deceased) wrote, “Although freedom of expression is fundamental in our democratic society, it is not a paramount value”. This freedom must, he concluded, be construed in the context of other values such as that of human dignity.

The judge found that the cartoon in question carried an “insulting message” and sought to “ridicule Islam and its founder”. As such, limiting freedom of expression in this case was justified.

The Sunday Times described the ruling as a “serious blow to the freedom of the press”.

Four years later. The same issue prompts another emergency court application. On this occasion, in 2010, cartoonist Zapiro draws the Prophet Muhammad lying on a therapist’s couch saying, “Other prophets have followers with a sense of humour”, as part of the ‘Everybody Draw Muhammad Day’. Jamiatul Ulama once again seeks an injunction to prevent the cartoon’s publication, claiming it could spark violence, but this time the court throws it out.

At the time, though, Mail & Guardian ombudsman Franz Kruger concluded that the decision to run the cartoon might have been misguided. “The deeply held belief that images of the Prophet are blasphemous cannot in any way be seen to impinge on the rights of the rest of us in this multicultural country and world,” Kruger wrote. “Why deliberately offend it?”

Today Haffajee responds that a similar argument could be made to persuade editors not to run pictures of Brett Murray’s ‘The Spear’.

“My question now is: Have we gone too far?” Haffajee asks. “Do we keep lowering the bar? Where do we stop? Now it’s because we’re too harsh about the Zuma administration, tomorrow…”

Haffajee says that she wouldn’t print the Danish cartoon again. But this weekend, City Press will publish a wall of Charlie Hebdo’s front pages – in solidarity with slain colleagues, she stresses again, not to provoke Muslims.

“I am Muslim. I understand the role of the Prophet,” she says.

Haffajee is adamant, though, that she won’t be daunted by the shadow of the Charlie Hebdo shooting when it comes to future editorial choices.

“I long ago decided that there are so many people who speak out for the limitations and responsibilities that should accompany free speech that I’m going to go on the other side, and become one of those free-speech fundamentalists,” she says.

Rapport editor Waldimar Pelser is another who suggests that the shooting may achieve the opposite to the gunmen’s intended effect, that it may instead “embolden many editors to reclaim as much territory as possible for freedom of speech”. This will be the case for South Africa as much as Europe, Pelser says.

He believes that what is at stake is a clash of values with a critical outcome. “Compromises are dangerous, because what these extremists really want is not a slightly less offensive press, but as little freedom of speech as exists in much of the Islamic world,” Pelser told the Daily Maverick.

“But in our righteous backing of Charlie Hebdo, and even the justified re-publication of its cartoons – which should not be avoided out of deference to, or fear of, the extremists – we must be careful not to estrange those Muslims who share our values of an open, pluralistic, tolerant and free democracy.”

Mpumelelo Mkhabela, editor of the Sowetan, is less certain that future editorial decisions will be untouched by considerations born out of the Charlie Hebdo massacre.

“I can’t rule out the possibility of some [editors] taking a more cautious approach following the Paris barbaric attack,” Mkhabela says – particularly if the lives of staff might be at stake.

“But I think we have developed a strong culture of legitimate protest in South Africa…Whenever publications publish that which some sections of society find offensive, the institutionalised mechanisms for redress are sufficient to deal with it. Some complainants have even marched on publications’ premises to submit memoranda – which is fine, as long as it’s done within the confines of the law and is not meant to intimidate journalists.”

The point that South Africa is a very different social and political context to France was made repeatedly to the Daily Maverick.

“South Africa hasn’t shown signs of any violence towards satirists and the media in general,” Business Day editor Songezo Zibi said. But that doesn’t mean the country’s media operates in an idyllic freedom of expression paradise.

“The events around The Spear and subsequent examples where outrage at a cartoon very quickly becomes a broad front against the media’s real and imagined indiscretions, to the extent of questioning the country’s freedom of expression, have an influence on my editorial decision-making,” Zibi says.

“These recent experiences have a censoring effect that has introduced an additional anxiety to the daily routine of news production.”

Zibi feels, though, that the inherent diversity of South Africa – and its history of prejudice – means that special care should be taken over cultural and religious sensitivities. Within limits. “A grave mistake would be to continually yield ground in the face of people who confuse the right not to be insulted with the non-existent right not to be offended.”

If anything, Quintal says, the shooting should be a rallying point.

“What it should result in is South Africans becoming more fiercely protective of our constitutional freedoms, an increased resolve to not shy away from truth-telling, and a renewed sense of fortitude among media.”

But South Africa’s most prominent and powerful cartoonist, Jonathan Shapiro – aka Zapiro – strikes a far more sombre note. “I think it will have an immediate global impact and I’m afraid it seems inevitable that we will see the effects here,” he told the Daily Maverick.

“Put yourself in the shoes of a cartoonist doing a cartoon now, or a week or a month from now. Which South African cartoonist would not feel some apprehension right now? And the same goes for editors, columnists, authors, artists, musicians, publishers… The list is long.”

Shapiro hopes that the ‘Je Suis Charlie’ initiative, used to rally supporters of free speech, will demonstrate the extent of global solidarity in countering the horror of what happened at the Charlie Hebdo offices.

“But it can’t take away the icy fear that is bound to inhibit individual media practitioners as each one contemplates how far to go.” DM

Photo: A file picture dated 19 September 2012 shows Publishing director of the the French satirical newspaper ‘Charlie Hebdo’, Charb, displaying the front page of the newspaper as he poses for photographers showing cartoons of the Prophet Mohammed in Paris, France. EPA/YOAN VALAT