For Charlie Hebdo, nothing was sacred, especially the sacred 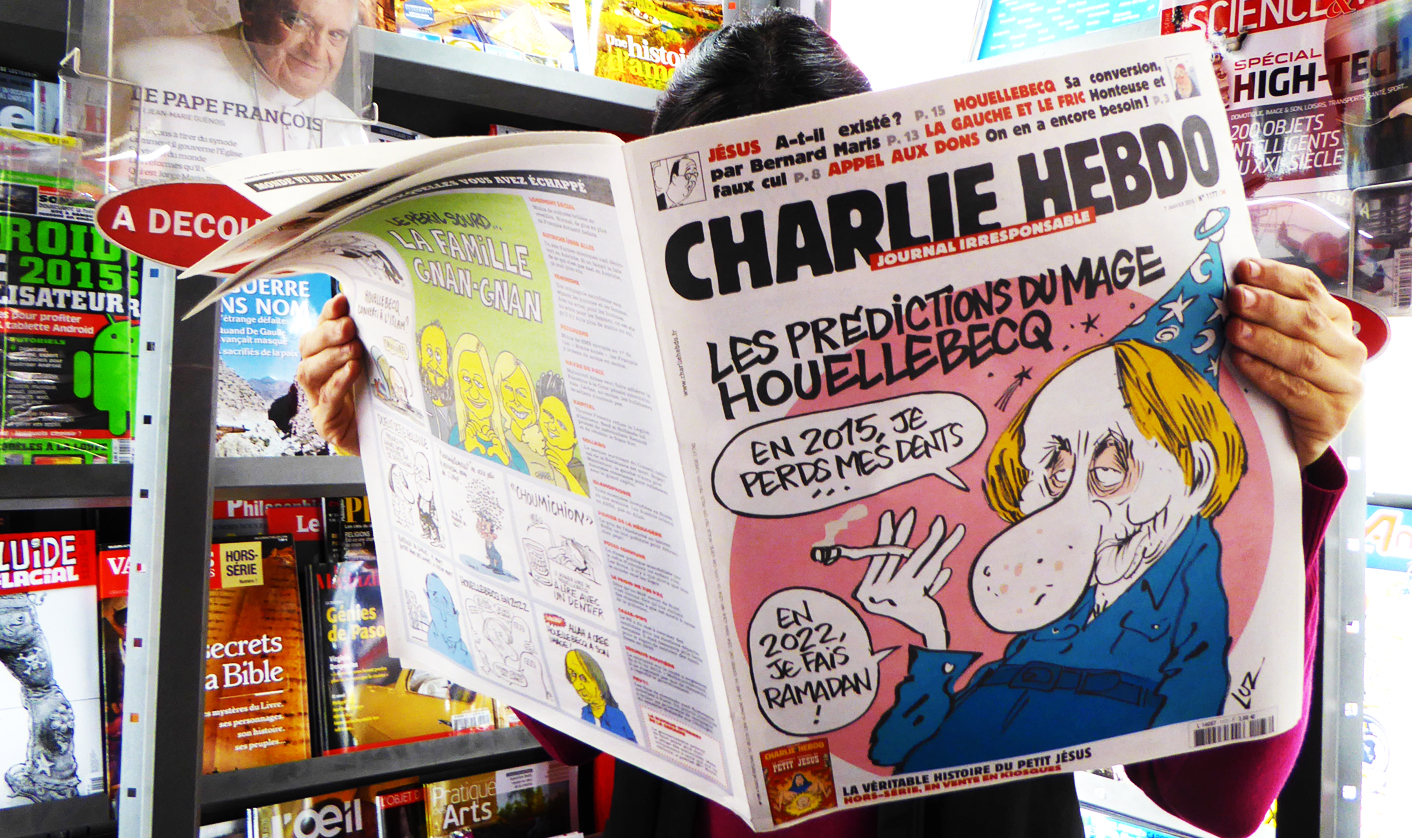 In the burbling swamp that passes for discourse in a divided and divisive France, there exists a newspaper called Charlie Hebdo. The rag belongs to a long satirical tradition skewering Gallic political, artistic and religious mores with humour as rough as a corked Syrah. Non-conformist, square and quick with a middle finger, you kinda have to be French to get it. For those who are not French, or are newly French, if the paper’s barbs often came across Islamophobic, anti-Semitic and racist—hey, bienvenu en France. Charlie Hebdo is not hip like The Onion, nor is its snark as up-to-the-second as John Stewart, but it represents something essential about the secular, social democracy that is modern day France: freedom of speech ensures that nothing is sacred, especially the sacred.

Charlie, like most printed newspapers in these times of digital revolt, is not a healthy beast. The paper recently issued financial appeals to readers under the tagline “Charlie is in danger!” There was a joke in this: Charlie was in actual danger—the newspaper’s premises suffered a firebombing, a lobby shooting, and innumerable death threats. The paper’s scribes and cartoonists earned no danger pay for pounding out the laughs, but they were committed to the paper’s long tradition of felling shibboleths. That commitment has resulted in an astonishing act of violence: twelve people, including editor Stéphane “Charb” Charbonnier and two police officers, were on Wednesday slaughtered in what has been described as “the worst terrorist attack in Europe since the attacks in London in July of 2005.”

If Charlie Hebdo often seemed obsessed with Islam, that’s largely because France is obsessed with Islam. The newspaper has always been a diligent, equal-opportunity offender—it emerged from the wreckage of a magazine called Hara-Kiri, which was banned for mocking Charles de Gaulle shortly after his death in 1970. In 2008 a cartoonist named Siné was fired for scribbling anti-Semitisms; Charb recently ran a fake “debate” regarding the existence of Jesus. And yet the paper’s loudest controversies, several of which made news around the world, had to do with the portrayal of the Prophet Muhammad. In 2006, the paper re-printed the twelve “Muhammad cartoons” initially published in the Danish paper Jyllands-Posten. (Charlie Hebdo ran a cover image depicting the Prophet crying, with the caption, “It’s hard being loved by jerks.”) The cartoons were designed as a test: how terrified were European publishers of Islamist outrage, and if the answer was “very”, didn’t that say something fundamental about self-censorship in the age of terrorism and political correctness?

The debate did not remain conceptual for long: the controversy went global, fatwas were issued, real people took to the real streets in Canada, Nigeria, Pakistan, everywhere. Many people died. Were the cartoons a glorious expression of free speech, or odious examples of hate speech? What even differentiated the latter from the former when it came to a revered religious figure? Charlie Hebdo’s editor at the time, Phillipe Val, was sued by the Union of French Islamic Organisations over the cartoons, and while President Jacques Chirac had complained about the paper’s “overt provocations”, continuing the long tradition of French politicians validating the publication by damning it, his successor Nikolas Sarkozy sent a letter of support to the courts. Val and his paper were eventually acquitted. Regardless, more concrete barriers were erected in front of more French embassies in more Muslim countries, and the gulf widened even further.

In 2011, Val’s successor Charb ran a spoof issue titled Charia Hebdo (charia meaning sharia), “guest edited” by the Prophet. (Caption: “One hundred lashes of the whip if you don’t die laughing.”) The laughter wasn’t deadly—Charlie’s religious satire is flatfooted and grim—but the firebomb tossed at Charlie’s offices nearly was. Undeterred, in 2012 Charb published nudie caricatures of the Prophet, just days after riots were stoked in various Muslim countries, protesting the release of the film Innocence of Muslims. The cycle of provocation and protest was by now firmly entrenched, benefitting both the publication (Muhammad jokes bumped up circulation), and conservative Islamists (outrage bumped up enrollment). Charlie Hebdo and its Islamist foes inhabited the same ecosystem: religious satire and religious fundamentalism had become mutually dependent and mutually reinforcing. Charlie needed the imams, and the imams needed Charlie.

And so this week was bound to be a rocky for Charlie Hebdo: the current issue’s front page depicts the novelist/provocateur Michel Houellebecq, whose recent novel Submission is a piece of speculative fiction that describes France after the Islamists have taken over, when everyone is forced to wear a hijab. “In 2022, I’ll do Ramadan,” says the cartoon Houellebecq, whose legendary ambivalence to Islam ensures that he is unlikely to “do Ramadan” under any circumstances. Like Charlie, Houellebecq inhabits the far edge of France’s satirical tradition—a space that is often ugly, racially and religiously offensive, and hateful. And yet it’s a space both protected by, and subject to, the law. It’s a space where France’s values are stress-tested in the face of shifting demographics, a space where the powerful and the powerless engage in a rolling debate. It is a space often filled with the promise of great violence. And on 7 January 2015, it’s where that promise was kept.

In the coming days, we’ll learn much about the gunmen’s intentions and affiliations. We’ll learn about the anger of France’s immigrant population, many of whom are Muslim, almost all of whom are written out of the modern French narrative. We’ll learn that the assailants have given more ammo to the right wing anti-immigrant National Front, who received over a quarter of the vote in the recent European Union elections. We’ll learn that Charb was willing to take a bullet for his right to draw Muhammad naked—“I’d rather die standing than live on my knees,” he was quoted as saying. We’ll learn that the French are united, that America stands with them, and we’ll learn new inspirational hashtags on Twitter. We’ll learn that freedom of speech, as with any freedom, can exact an enormous price. Finally, we’ll learn that terrorism—whatever that term means at this historical millisecond—is forever mutable and evolving, and that a new, localized front has opened up in the endless war against it.

What we won’t learn is how to be in this age of zero concessions, or how to build a bridge over the divide. Nothing can ever justify the bloodshed visited upon Charlie Hebdo’s offices yesterday. And yet the paper’s raison d’etre—the relentless, vicious mocking of power—often visited collateral damage on France’s powerless. In order to curb the rage of the banlieues, French politicians begged Charb and his staff to moderate their satire. But to give in, to pull back, would have compromised their reason for being, and undermined the values that made France the original home of Liberté. Égalité and Fraternité were often sacrificed in order to satisfy that first principle, but so it goes: if the French weren’t free to publish cartoons, they weren’t free at all.

Is this what freedom looks like in the second decade of the twenty-first century? A constant conversation between democracy’s uncomfortable, often ugly vitality, and an AK-47? Perhaps. But the attack on Charlie Hebdo reminds us that a free media—essential to any conception of democracy—is a remarkably soft target. Three assailants with guns, and the whole world is thrown into disarray. (Or, rather, the disarray is briefly illuminated.) The cartoons caused violence, which inspired more cartoons, which brought more violence, which will now invoke the violence of the state in order to protect an institution devoted to keeping the state’s unlimited power somehow in check. It’s a labyrinthine absurdity worthy of Borges. But in a world in which cartoonists are massacred for their scribbles, however offensive, perhaps we should have no expectations of anything making sense. DM

Photo: A woman reads the latest issue of French satirical newspaper ‘Charlie Hebdo’ in a bookshop in Paris, France, 07 January 2015. Masked gunmen with automatic rifles killed 12 people at the Paris headquarters of satirical French magazine Charlie Hebdo, which had angered Muslims two years ago by publishing cartoons of the prophet Mohammed. Speaking at the scene of the assault, French President Francois Hollande said the shooting was a ‘terrorist attack’ and that the government had raised the alert level in the capital to the highest as police hunt for the gunmen, who escaped after the shooting. French media said two policemen were killed in the shooting, which lasted several minutes after the gunmen entered the magazine’s offices and started firing. Four people were injured, and Hollande said the death toll could rise. EPA/CAROLINE BLUMBERG