Africa for Pessimists: 2014 in review 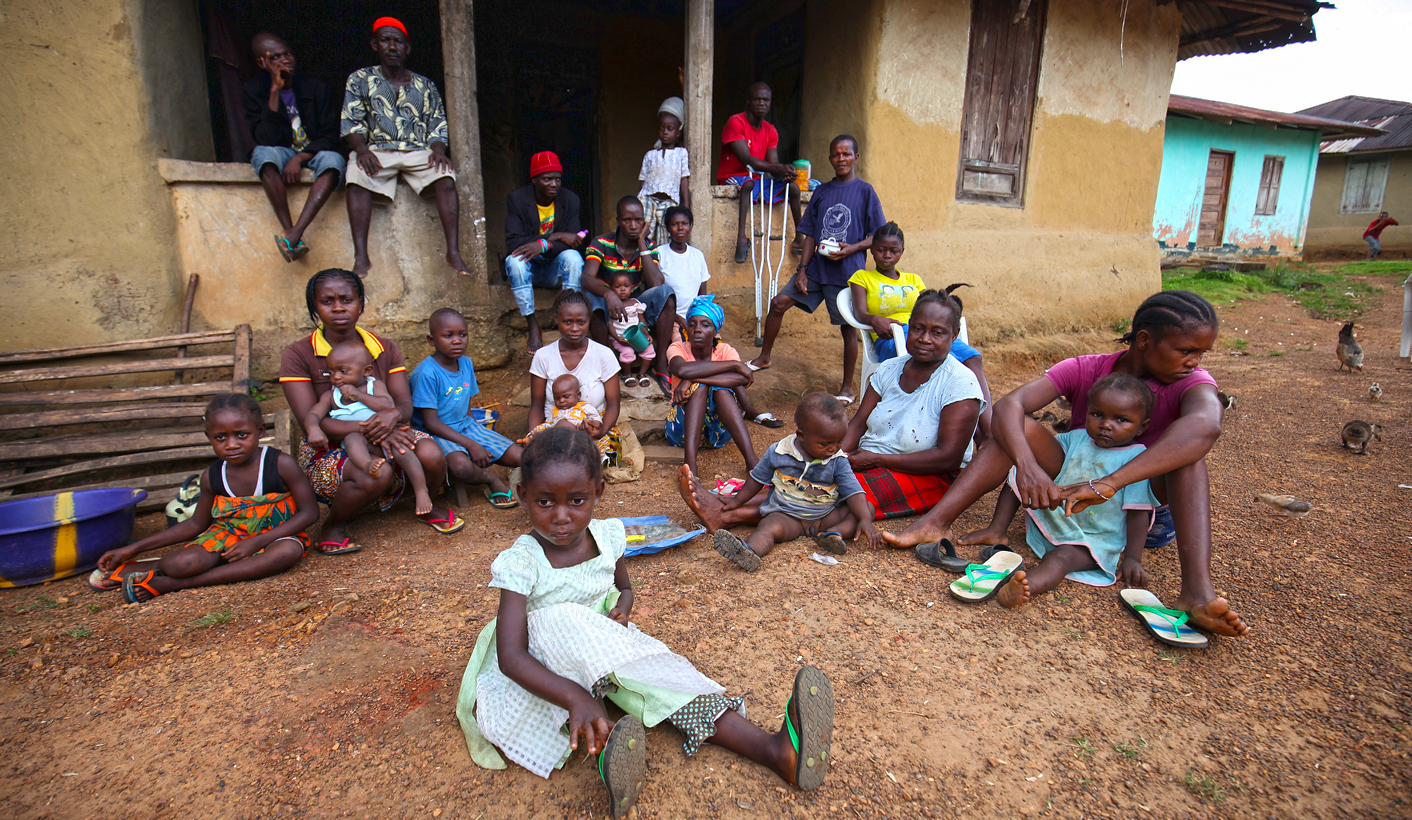 Let’s be honest: 2014 has not been a great year for Africa. The continent has been rocked by disease, terrorism and civil war, all of which threaten the fragile gains that underpinned that ‘Africa Rising’ narrative. SIMON ALLISON highlights this year’s worst moments.

Note: It’s not all bad news. Read the counter-balancing Africa for Optimists: 2014 in review, which should go some way towards restoring your faith in humanity.

Ebola, and the governance failures which let it spread

Ebola is a nasty disease, one of the worst, there’s no doubt about it. As of writing, the number of deaths in West Africa from this year’s outbreak has reached 6331, and is showing no sign of slowing down. But Ebola is not the real problem.

Despite the paranoia around it, Ebola is not a particularly infectious disease. To get it, you’ve got to get up close and personal with the bodily fluids of someone who has it, which should make it relatively easy to contain. And in countries with an even moderately functional health system, it would have been contained.

Unfortunately, Guinea, Liberia and Sierra Leone don’t fall into that category. These are countries with few clinics, fewer hospitals, no public health information services and a woefully inadequate number of doctors. According to the more generous estimates, prior to the outbreak there were just 200 doctors in Liberia, for a population of 3.5 million – that’s roughly one doctor for every 175,000 people.

Ebola spread not because of the disease itself, but because these countries could not provide their citizens with even the most basic health requirements; and, crucially, the governments in question had so little credibility that people simply refused to trust its health and safety warnings. Ultimately, the Ebola outbreak is a failure of governance.

The consequences of this failure will be felt for generations to come. The Ebola body count is just one of the costs. Even more serious – albeit very difficult to quantify – is the effect that Ebola has had on other public health crises. With almost every health facility in the affected countries now dedicated to Ebola, other patients in need are left to fend for themselves. Without doubt, this year the death tolls from HIV/Aids, malaria, tuberculosis and maternal mortality will soar.

The economic impact is also devastating. These are already poor countries, and Ebola has crushed whatever economic progress there was. According to the World Bank, Sierra Leone’s growth rate this year will be 4% (compared to 11.4% pre-crisis); Liberia’s will be 2.2% (compared to 5.5%); and Guinea’s will be 0.5% (compared to 4.5%). These are not just numbers: they are the difference between millions of people rising out of poverty, or not.

Read Ebola in Guinea: Finding Patient Zero and Ebola: The disease is not the real problem

It seemed like a good idea at the time. At least that’s what the western powers that agitated for the removal of Libyan strongman Muammar Gaddafi in 2011 will be telling themselves now – because, in retrospect, it was a terrible idea. Since Gaddafi’s death, Libya has slowly disintegrated, until this year when the only word that adequately describes the situation is anarchy.

No one is in charge of the country, which has divided into little fiefdoms run by a motley assortment of ragtag militias, renegade army units and Islamist movements. Relegated to a tiny patch of territory near the Egyptian border – an easy escape route when required – is Libya’s official government, completely powerless in the country they are supposed to rule.

As far as those western powers are concerned, the worst outcome is the foothold that the Islamic State, through its Libyan affiliate Ansar al-Sharia, is establishing in and around Benghazi. It is a tragic irony that western airstrikes ultimately opened the political space for the expansion of Abu Bakr al-Baghdadi’s caliphate.

The African Union, meanwhile, might feel vindicated. At the time it argued strongly for a slow, mediated political transition, which would have seen Gaddafi retain some power but would have pushed him into significant reforms. This considered position was dismissed as typical AU waffling, but it now looks a whole lot more sensible than the bomb-them-and-to-hell-with-the-consequences approach.

Read Libya: The house of cards has collapsed and Goodbye Libya, hello the Islamic Emirate of Benghazi

The metamorphosis of Boko Haram

Boko Haram has always been dangerous. The Islamist militant group has caused chaos in north-eastern Nigeria for the last five years, pushing its Sharia law agenda through the barrel of the gun and the explosives vest of the suicide bomber, and killing thousands of innocent people in the process.

This year, however, it has begun to behave a little differently. Throwing down the gauntlet to the hapless Nigerian security forces, Boko Haram has supplemented its guerilla tactics with the more traditional tactics of a secessionist movement: the seizure and occupation of territory. In the process it is turning its fight against the Nigerian government into a de facto civil war.

It is unquestionably inspired in this by the successes enjoyed in Iraq and Syria by the Islamic State. It is no coincidence that Boko Haram leader Abubakar Shekau declared the territory controlled by Boko Haram to be part of an “Islamic Caliphate”, even if he did not pledge allegiance directly to the Islamic State.

Given the difficulties with access to the area, and the propensity of both Boko Haram and the Nigerian government to exaggerate their successes, it’s difficult to know exactly how much territory the group controls. But it’s substantial, with the north-east’s biggest city Maiduguri likely to be the next major target.

The question now is what Nigeria can do about it. There’s no easy answer, but it seems safe to conclude that the current military-led strategy is failing. Dispiritingly, President Goodluck Jonathan seems to have no other ideas as he demands more men and equipment for his armed forces.

Read In Nigeria, Boko Haram follows in the footsteps of Iraq’s Islamic State and The Goodluck Jonathan Show must go on

It didn’t take long for Africa’s newest country to turn in on itself. Achieving independence from Sudan proper in 2011, it was just two-and-a-half years later, on 15 December 2013, that fighting erupted in the capital Juba. The main protagonists were the two most powerful men in the country: Salva Kiir, the president, and his deputy Riek Machar, who were also rivals during the long war for secession.

This year, that divide has hardened into a fully-fledged civil war between the government on one side and Machar’s loose band of militia groups, known as the Nuer White Armies. There are messy tribal dimensions to the split – Kiir’s Dinka and Machar’s Nuer are the two largest tribes – but the dispute ultimately boils down to a personal battle for power and resources between Kiir and Machar.

Ultimately though, everybody loses. South Sudan was born poor and fragile, and this fighting has wiped out any chance of progress in the near future. Tens of thousands of people have already died, while an estimated 1.9 million have been forced from their homes (that’s more than 10% of the population). Millions more are on the edge of starvation as the political turmoil devastated farmers’ ability to plant crops.

There’s no sign of the fighting easing up anytime soon. If anything, it’s going to get worse before it gets better as South Sudan enters its dry season, the traditional fighting season (most roads are impassable when it’s wet, making it difficult for armies to move around). Meanwhile, peace talks in Addis Ababa appear to be going nowhere.

Read South Sudan: What happens when the rain comes down?

Band Aid, #BringBackOurGirls and Africa’s inability to define itself

Surprise, surprise – half a century after the colonial era and the western world continues to define Africa on its own terms. Aside from the mass ad misplaced hysteria over Ebola, Africa made international headlines this year thanks to not one but two misguided publicity campaigns.

The first was the notorious #BringBackOurGirls, a social media drive that even roped in Michelle Obama. The girls in question were the more than 200 school girls kidnapped from their school in Chibok, Nigeria by Boko Haram, and the hashtag was designed to both raise awareness of their plight and pressure the Nigerian government – and, more disturbingly, western governments – to do something.

It raised awareness, certainly, but hasn’t come close to bringing back any of the kidnap victims. If anything, the massive international publicity generated by the hashtag forced both Boko Haram and Nigeria to dig in their heels, and made any kind of negotiated settlement politically impossible. It also reinforced perceptions, once again, that Africa can’t look after itself; that it requires external intervention to solve our problems (never mind that this external intervention has a long track record of only making things worse).

The second was the re-release by Bob Geldof and assorted celebrities of the Band Aid single, Do They Know It’s Christmas?, to raise funds to fight Ebola. As the Daily Maverick’s Richard Poplak commented: “And while this Band Aid is a more muted, carefully politically correct affair—I doubt mountains of coke were consumed as they were after the initial recording in ’84—that does nothing to dim its essential evil: the gargantuan world-swallowing holier-than-thou desire of the famous to help while simultaneously increasing their fame.”

It’s hard to know where to start in explaining the problems with the original Band Aid: the patronising, borderline racist lyrics; the perpetuation of negative and incredibly damaging stereotypes about Africa; or the genuinely terrible melody. Thirty years later, all those problems remain in the updated version.

More troubling, however, is the lack of alternative narratives. The torrent of criticism directed at Geldof & co. was heartening (and largely absent in the 1980s), but nonetheless revealed this continent’s deep insecurities. The truth is, Africa is still far too reliant on foreigners to tell our stories, which is why it’s a problem when they get it so badly wrong.

Read #BringBackOurGirls and the trouble with hashtag diplomacy and BANDAID30: The Narcissist’s anthem gets a sequel. DM

Photo: Liberians under quarantine due to the the death of more than twenty residents of their village from Ebola sit outside a house in Jene Wondi, Liberia, 30 October 2014. EPA/AHMED JALLANZO