Botswana votes in climate of fear and intimidation 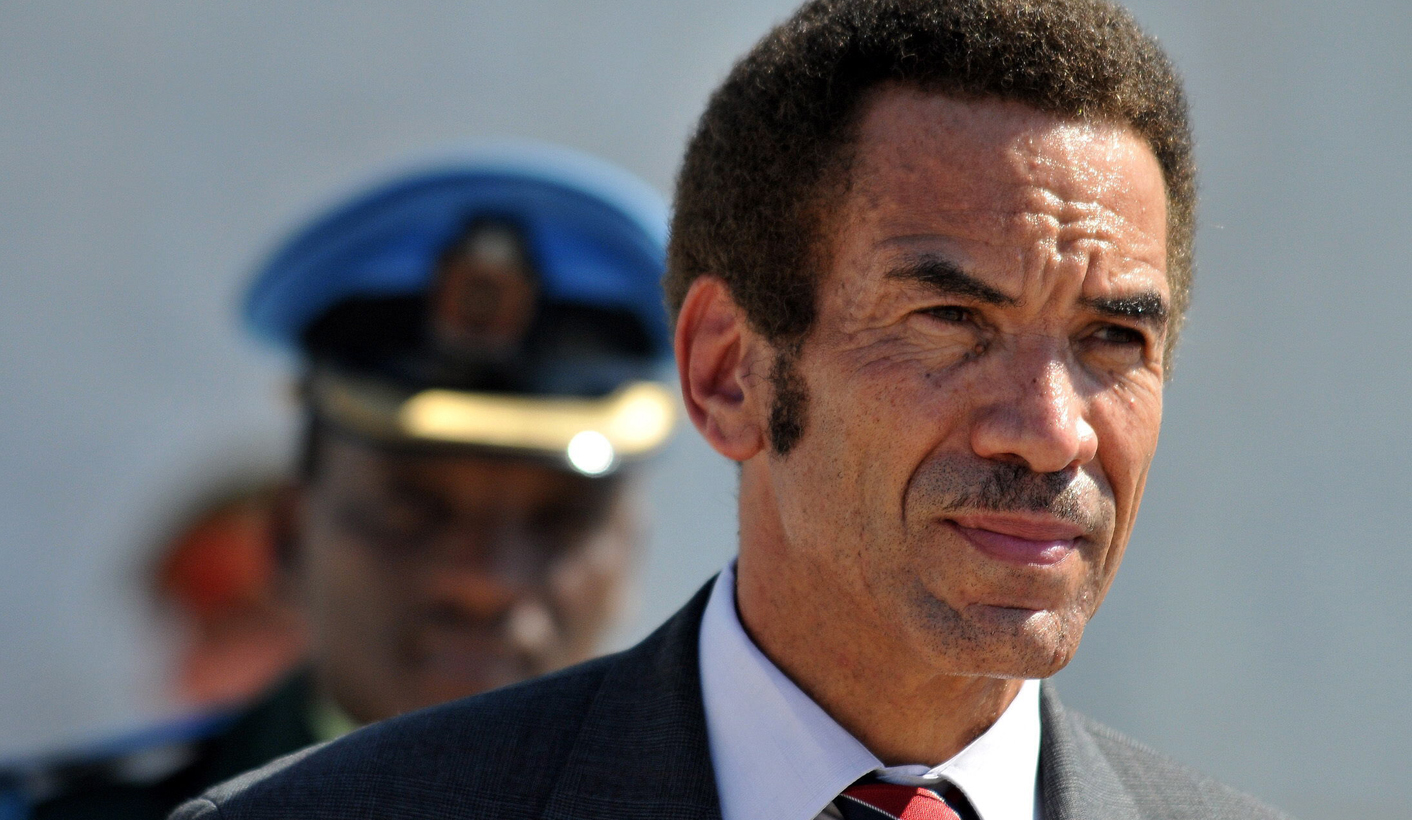 So much for Africa’s model democracy. As Botswana votes on Friday, it does so in an unprecedented climate of fear and intimidation. The incumbent, President Ian Khama, will probably win again – but what has he sacrificed to prolong his stay in State House? SIMON ALLISON and ANDREA TEAGLE report from Gaborone.

They came for Oarabile Motlaleng at 3:06am on 11 September. A few hours later, a neighbour found him in a ditch outside his house – naked, bloodied and left for dead.

Motlaleng is running for a council seat in a poor suburb in south Gaborone, under the banner of the opposition Botswana Congress Party (BCP). Council votes will be cast on Friday 24 October, the same day that country votes for members of parliament, and, indirectly, its next president. For once, opposition parties think they might be in with a chance of upsetting the ruling party’s electoral dominance.

Photo: Oarabile Motlaleng stands outside the house where he was attacked, still on crutches and in a neck brace.

Motlaleng is quietly charismatic and an eloquent speaker. As well as being an energetic politician, Motlaleng moonlights as a pastor, and he was up early for his regular morning prayers when he heard a knock on his door.

“I opened the door. Two guys came in and then they apprehended me. Immediately, I was in a state of shock. And then they took something like steel wool and put it in my mouth. There was a plastic bag that they put on to my head… and then they took my hands and they tied me.” When Motlaleng describes the events of that evening, his voice falters, the trauma all too visible. Evidence of his injuries is visible too, in the neck brace he’s still wearing and the crutches by his side.

Motlaleng was taken that night to an unknown location where he was beaten and tortured. He was shocked repeatedly with some kind of high voltage electric prod, and subjected to extreme genital abuse. All the while, his attackers demanded information. What was the BCP’s strategy? Who were its members? Where was the membership database? Motlaleng did not crack. Eventually the attackers went too far, knocking him unconscious with a blow to the neck. Somewhat miraculously, he survived the attack, but, two months later, it haunts him still.

“I’m trying to play tough guy, but down inside, it is not tough. I’m afraid. I don’t sleep during the night,” he said.

In peaceful, stable Botswana, known as a shining beacon of democracy and good governance in Africa, Motlaleng’s story is unusual. Until recently, it was unprecedented. But Botswana is changing.

Motlaleng is not the only politician to experience intimidation. And he might have been lucky. A prominent opposition leader, Gomolemo Motswaledi, was recently killed in a car crash that his supporters describe as suspicious (police say it was an accident, but are investigating). Meanwhile, presidential candidate Duma Boko says that he and other opposition figures are next on a government hit list (a claim Khama has dismissed as propaganda).

The politics of intimidation seems to be working.

In Gaborone, people were reluctant to talk politics to the Daily Maverick and, when they did, they were literally looking over their shoulders for government agents. “The DIS is everywhere,” we heard repeatedly, referring to the Directorate of Intelligence and Security, the shadowy security agency with close ties to the president.

Khama has been in power for the last six years. He was a former army general, but his credibility comes from his impressive pedigree as chief of Botswana’s largest tribe and son of founding father Sir Seretse Khama. His party, the BDP, is the only governing party that independent Botswana has ever known. It has a decent track record: its good – even visionary – management of the country’s diamond resources has created a prosperous if unequal economy, a largely literate society and a functional government often lauded as a model for others. Botswana regularly leads African governance rankings.

Under Khama, however, a more authoritarian streak is beginning to emerge, one so pronounced that even former President Festus Mogae allegedly called him a ‘dictator’. And it’s not just the opposition that’s feeling it: journalists have also come under fire. Recently, Edgar Tsimane, a reporter with a local independent newspaper, fled to South Africa, fearing for his life. And the ruling party itself has been rocked by a series of defections as members look to break free from Khama’s controlling leadership.

Many defectors have found their political home in the Botswana Movement for Democracy (BMD), a breakaway party established in 2011 by disgruntled former members of the ruling party. The BMD is one of the three parties allied under the Umbrella for Democratic Change (UDC) to contest the upcoming elections. The other main challenger to the ruling party is Motlaleng’s BCP, currently the official opposition.

But neither is likely to unseat Khama on their own. Even together, the task appears impossible. Khama’s effective monopoly of public media space, his control over government resources and the historical loyalty his party still commands is likely to see him retain his grasp on power for another term. Barring a massive upset, the opposition’s best hope is probably to force a hung parliament and extract a few concessions from Khama’s new administration.

This is an unfortunate time for Botswana to be losing confidence in its leadership. Much like its politics, Botswana’s economy may look healthy from the outside – GDP grew by 5.4% in 2013, and has experienced consistently high growth since independence – but it is facing an impending crisis of its own.

“Botswana’s economy depends entirely on diamonds,” said Ronan Grynberg, an economist with the Botswana Institute of Development Policy Analysis (BIDPA). But, no matter what De Beers might say, diamonds are not forever and Botswana’s could start running out as soon as 2027. At which point, GDP could plummet by 45%, according to BIDPA estimates. This would be an economic catastrophe. “Diversification should be a national priority,” Grynberg argues.

The ruling party’s current plan to pre-empt this is to exploit yet another finite resource, the country’s plentiful albeit poor quality coal deposits. This is no silver bullet, however. Getting the coal to market requires the construction of a multi-billion Pula railroad, which would likely make the coal too expensive to be competitive – even if Botswana could find someone to fund this massive infrastructure project.

Issues like this should be at the forefront as Botswana approaches Friday’s elections. Instead, much of the country is concerned – with reason – that Botswana is backsliding in other areas. Its fine democratic record is under threat, and a climate of fear pervades the very people who should stand up for it: the journalists, the academics, the politicians. They can’t look forward while they’re busy looking over their shoulders. And neither can Botswana. DM