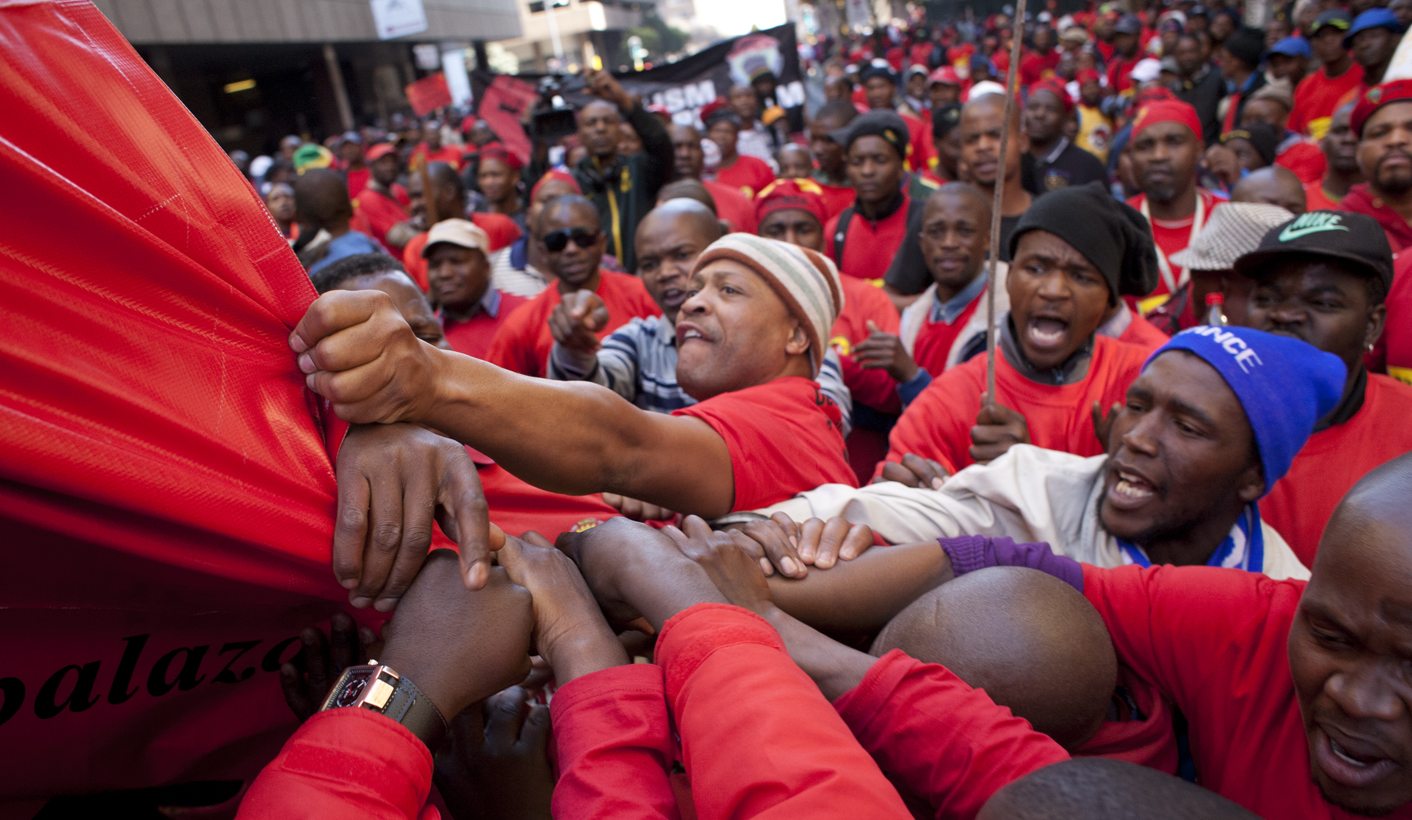 As negotiations are under way to resolve Numsa's week-long strike in the metals and engineering sector, reports of violence have prompted a rethink on how to legislate industrial action. Finding the balance, however, between the right to work, the right to strike and the right to safety isn't easy. And then there's the economy to consider. By GREG NICOLSON.

Numsa’s 220,000 workers in the metals and engineering industry have been on strike for a week, costing the economy an estimated R300 million a day, halting work at General Motors, interrupting construction at Eskom’s Medupi and Kusile sites, and causing rating agency Moody’s to warn SA may face a credit rating downgrade.

The Steel and Engineering Industries Federation of Southern Africa (Seifsa), the biggest employer negotiator, said Numsa has rejected its latest offer of wage increases of up to 10% for the lowest paid workers in a three-year deal which would reduce to 9% in the second year and 8% in the third. The union wants 15% and a one-year deal.

The Department of Labour held meetings with the different stakeholders over the weekend and reported progress in discussions. On Monday, spokesperson Mokgadi Pela told Jacaranda News there was a meeting with Seifsa and a new offer would be presented to Numsa on Monday evening. Pela was hopeful a resolution might be reached soon. Throughout negotiations, Numsa has been clear it wants a double-digit increase but the parties have struggled to resolve non-wage demands such as the use of labour brokers and companies using the Employment Tax Incentive scheme.

There have been numerous reports of violence and intimidation during the strike which following the five-month strike in the platinum industry have led to calls for greater regulations over industrial action. Police spokesperson Solomon Makgale said on Monday there had been 26 strike-related arrests. Communications Minister Faith Muthambi expressed concern over the violence on Friday and said the state will not tolerate lawlessness.

On Monday the National Employers’ Association of South Africa (Neasa) chief executive Gerhard Papenfus said many member organisations were reporting violence, particularly in Pretoria and Johannesburg’s East Rand. Neasa represents around 3,000 organisations, mainly small and medium- sized, in the metals and engineering industry negotiations and around half of those are affected by violence or intimidation, said Papenfus. Reports included fences and windows being broken and car windows of administrative employees still at work being smashed. Some employers are fearful for their lives and Papenfus even had a report of workers being dragged out of offices and sjambokked. While he believes police aren’t doing enough to prevent the violence, he said officers are often far outnumbered by strike members.

Neasa has only offered 8% increases and wants reduced entry-level wages. In a statement, Papenfus said the industry can’t afford high increases: “The metal industry is no longer competitive; we are not creating any new jobs. In this regard we are failing South Africa. This industry is in the process of decline and will eventually be destroyed unless we considerably adapt the current industry wage model. Products which used to be manufactured in South Africa are now manufactured elsewhere.” While Neasa generally represents smaller businesses, an agreement reached between Seifsa and Numsa is likely to be applied across the industry.

Numsa has called the allegations of violence “propaganda and slanderous allegations” by the employers aimed at undermining the strike. “Workers have not forgotten their comrades were slaughtered in Marikana by the police,” said union spokesperson Castro Ngobese in response to calls on the police to intervene. Reports on the weekend, however, said Numsa leadership warned shop stewards against violence so as not to give its detractors further ammunition against.

Amidst the reports, Democratic Alliance shadow labour minister Ian Ollis announced the party would table a Private Member’s Bill aimed at preventing strike-related violence. The Bill will be a redrafted version of that which passed through the Committee for Private Members’ Legislative Proposals and Special Petitions – the only Bill passed by the Committee, said Ollis – and was referred to the Labour Committee before the fourth Parliament closed.

On Monday, Ollis referred to the Constitutional Court’s Garvas ruling that means organisers of gatherings, like a protest march, must take reasonable steps to prevent foreseeable damage, violence and destruction or be held liable. The new Bill, which is expected to be tabled within two weeks, wants unions to meet a number of steps during a strike. They include educating workers on violence and the law and ensuring there are enough marshals on marches. If these points aren’t met the courts could award damages against a union. The DA also wants the courts to have the power to force parties into arbitration if a strike becomes excessively violent and to declare violent strikes unprotected.

Ollis said the redraft may include a call for the courts to be able to bring parties back to the negotiating table in unusual and protracted strikes. Mineral Resources Minister Ngoako Ramatlhodi recently suggested he would support the introduction of a deadlock-breaking mechanism to force parties to keep negotiating in protracted strikes.

Ollis said the DA isn’t seeking to prevent industrial action and added that a strike’s damage to the economy isn’t a valid reason to force parties into arbitration. The key issue is safety, he said. “The right to strike is a right relative to public safety,” said Ollis, encouraging victims to claim damages from strike violence through the courts.

Investment Solutions economist Chris Hart agreed the right to strike needs to be balanced with other rights. Despite a regular cycle of strikes and violence, the issues are never resolved, said Hart. “You’ve got impunity and it has to be ended,” he said, calling on unions to take responsibility. Hart believes wage negotiations need to be tied to productivity. Then, unions should have to conduct secret ballots to gauge support for industrial action and said that if mediators are appointed in protracted strikes they should consider SA’s position in the global economy and look at using inflation plus 1-2% rather than higher increases, he said. With the size of the manufacturing industry, a strike shorter than the platinum strike could have the same impact, said Hart, who argued that regular labour disputes will lead to disinvestment in the long-term.

Cosatu spokesperson Patrick Craven said the federation of trade unions is totally opposed to strike violence and legislation should not be introduced which might punish a union’s entire membership for the actions of some individuals, who may not even be members. The vast majority of collective bargaining processes are successful, said Craven, but they never get media attention. Cosatu would be opposed to any legislation that may force parties back to the table and it could be deemed unconstitutional, said Craven, adding, “Nobody should be forced to work and if they are it’s bordering on slavery.

“Employers are at least as responsible for strikes taking place and, we would argue, more responsible,” he said. Craven added that the economic problems aren’t due to strikes but the capitalist structure of the economy. While strikes are temporary, the structure stays the same and that’s what needs to change, he argued.

At least everyone’s clear about one thing – the situation needs to change. How? That’s the hard part. DM