AU summit conclusions: Number Ones look out for number one, again 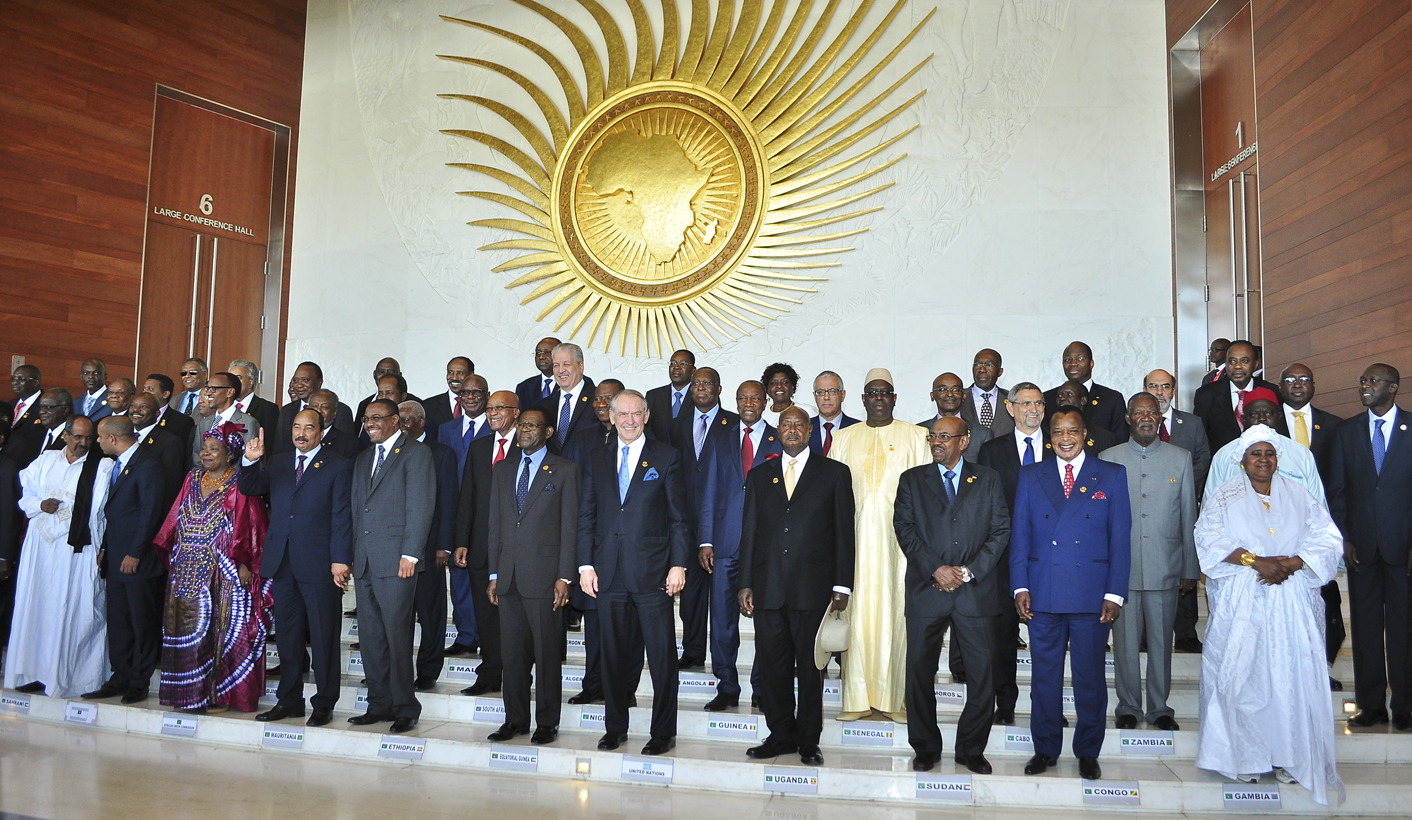 The 23rd Ordinary Summit of the African Union ended last week in Malabo, Equatorial Guinea – and it was very ordinary indeed. SIMON ALLISON reports on yet another continental talk shop where our leaders looked out for themselves first, and the rest of us second.

In Malabo, the capital of Equatorial Guinea’s archetypal African dictatorship, Africa’s leaders gathered to put our continent to rights. In many ways, the location was fitting: The island capital and the purpose-built, enormously expensive conference venue where the 23rd Ordinary Summit of the African Union was held are deliberately isolated from the grinding poverty which characterises this oil-rich state. Likewise, Africa’s leaders seemed isolated from the continent’s real problems, focusing instead on saving their own skin, and keeping themselves in power.

In particular, there were three decisions that rankled.

First was the generous reception accorded to new Egyptian President Abdel Fatah el-Sisi. This is the man, remember, who as army chief overthrew Egypt’s elected government in June 2013. This is the man who ordered the massacre of more than 900 Muslim Brotherhood supporters in August 2013, as they were protesting his seizure of power; and who has arrested thousands more, often on the most spurious of charges. This is the man who sentenced journalists to long jail terms for the ‘crime’ of simply doing their job.

This is also the man described by African Union President Nkosazana Dlamini-Zuma as a brother. “We warmly welcome the delegation of Egypt, our dear brothers and sisters, back home,” said the AU Commission chairperson. Egypt had been suspended from the AU following Sisi’s coup, but has now been reinstated following the largely symbolic elections which confirmed Sisi as president. Speak for yourself, NDZ: he’s no brother of mine.

Second was the passage, without serious opposition, of the innocuous-sounding Protocol on Amendments to the Protocol on the Statute of the African Court of Justice and Human Rights. The protocol aims to set up a new African court to try serious international crimes (like war crimes and genocide), but hidden in the legalese of the amendments is one very disturbing clause. This will provide immunity to all sitting African heads of state, as well as senior government officials – effectively inoculating governments from prosecution. Never mind that many African leaders have in the past been implicated in serious atrocities and human rights violations (not least the aforementioned Egyptian President).

“At a time when the African continent is struggling to ensure that there is accountability for serious human rights violations and abuses, it is impossible to justify this decision which undermines the integrity of the African Court of Justice and Human Rights, even before it becomes operational,” said Netsanet Belay, Amnesty International’s Africa Director for Research and Advocacy. We can’t disagree.

The third problematic decision was also contained within this protocol. In early drafts, put together with help from international justice experts and African civil society, the protocol contained a clause excluded peaceful protests – the Arab Spring kind, the kind that results in the ousting of a government – from the general provision that criminalises unconstitutional changes of government. It was designed to make sure that people were not punished for rising up against oppressive regimes. This, however, was too much of a threat for too many of the leaders assembled in Malabo, and the clause was scrapped.

While none of these developments are particularly encouraging, it wasn’t all bad.

For South Africa in particular, the summit was a resounding diplomatic success. South African diplomats have been lobbying hard for the creation of an African military response force, with international relations minister Maite Nkoana-Mashabane doing her quiet diplomacy thing in Mauritania, Tanzania and Uganda in support of the project. The idea is that the next time there is an urgent need for a military intervention on the continent, there will be African troops on standby to do the dirty work.

“This is how you give practical meaning to this thing of African solutions for African problems,” said international relations spokesman Clayson Monyela. “Until Africa sets up and activates this African capacity to respond immediately when the need arises, we will never as Africans be able to deal with our own problems.”

South Africa proposed the African Capacity for Immediate Response to Crises, a roughly 5,000-strong force with troops from 13 countries who have already indicated their willingness to participate. If all goes according to plan, this will be in place by October, and will eventually morph into the African Standby Force – a more substantial, and more permanent body.

The AU summit enthusiastically endorsed the new force, but hurdles remain – most significant being who is going to pay for the thing? These are details that will be worked out later, by a special committee of participating army chiefs, said Monyela. This sounds like diplomat-speak for ‘right now, we have no idea’. Monyela did say that the bulk of the funding should come from within Africa. “Africans must put their money where their mouth is, they must be the ones to lead,” he said.

Other significant decisions at the summit included the establishment of an African Monetary Fund to help shape macro-economic policy on the continent. This, however, like so many of the other decisions and protocols and policy positions, is a good idea in theory – but we’ll believe it’s happening when we see it in action. DM

Photo: African heads of state and government pose for a group photograph during the opening session of the 22nd African Union Summit at the African Union Headquarters in Addis Ababa, Ethiopia, 30 January 2014. EPA/DANIEL GETACHEW