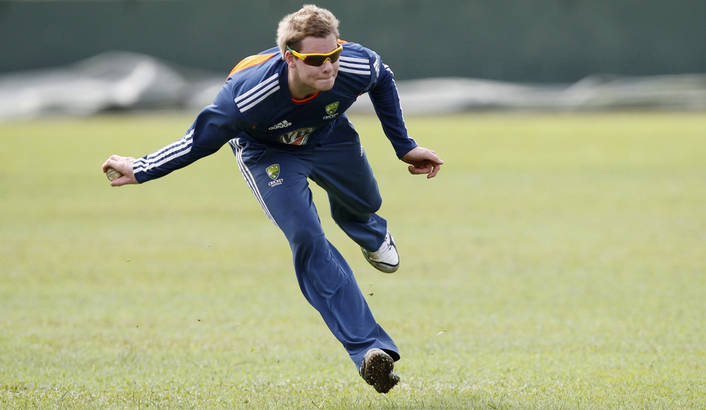 Mitchell Johnson led the Australian pace attack in superb fashion taking four wickets to help reduce South Africa to 140-6 at stumps on day two. Below are the events as they happened.

17:06 Johnson again. Well, Johnson hasn’t done anything wrong today. McLaren bowled through the gate and South Africa continue their slump. 126-6, McLaren gone for  8 off 33. 17 overs remain today, latest play can go on is until 18:00

16:28 Just as things were starting to go so well, Johnson takes a blinder of a catch to get rid of Duminy. Duminy tries to be positive agaisnt Lyon and gets a leading edge to long off where Johnson takes a fantastic catch, both arms outstretched and diving at full length. Just can’t keep him out of the game. South Africa 110-5, here’s the all-rounder McLaren.

16:17 Ton up. De Villiers hammers four through midwicket off Siddle, that brings up the ton for the Proteas.

16:14 Easy does it for the Proteas. Duminy has just launched Lyon for six to bring up the 50-run partnership between him and De Villiers. South Africa 91-4.

15:27 Final session about to get started. And what an important session it is…

15:10 Blown away by pace. South Africa got a bit spooked by Mitchell there. He gets a standing ovation from the Aussie spectators here. Not sure South Africa expected that that kind of thing would happen to them. To England, yes, to South Africa, nah? Well, at least now they know. Johnson’s pace is something else. It’s real and it’s fierce because he has the control to go with it. They’re knee deep in it at 63-4, still 334 behind. Duminy and De Villiers in the middle.

15:07 South Africa have started to take the game to the Aussies and up the run rate. If they’re gonna score, they’ll score in boundaries. Johnson just sent to the fence by Duminy. Nathan Lyon has now come into the attack with a few minutes to go before tea. South Africa 62-4, 335 runs behind.

14:55 Something positive to repoert. De villiers has just pulled Johnson for six over fine leg. Short from Johnson again and thwack.

14:51 This could be over by tomorrow at this rate.  Appeal for leg-before off Amla, umpire on the field not interested, Sidlde goes for the review and it shows it’s plum. Amla gone for 17 off 42. South Africa 43-4. Still 354 runs behind.

14:35 Johnson’s having one of those days. He’s been brutal, he’s been fast, he’s been threatening and he’s put thedoubts in South Africa’s minds already. Amla and De Villiers have a huge burdon on them. SA 37-3, 360 runs behind.

14:22 All going to hell in a handcart here at Centurion. Du Plessis becomes Johnson’s third wicket, he’s caught in the slips. South Africa slip to 23-3.

14:14 Petersen was always going to be a walking wicket. Awful shot and he edges through to Haddin and becomes Johnson’s second wicket.  South Africa 15-2, in strolls Faf du Plessis at number four.

13:58 First blood to Mitchell Johnson. Bounces Smith and the SA skipper gloves it to where Shaun Marsh takes a catch. South Africa 11-1

13:54 Ryan Harris has been tasked with the first over of the Aussie bowling innings. Graeme Smith dispatches him for two fours. Not exactly elegant, but who needs elegance when you’re effective? South Africa 10-0

13:38 TAIL WRAPPED UP. Steyn gets Siddle, bowled. Australia end on 397 all out. Marsh and Smith were the stars with the bat. For South Africa, it was Dale Steyn with 29-6-78-4 and vernon Philander with 24-5-69-1. Big Test now awaits the South African top order and their patience against the prowling Mitchell Johnson. Petersen, in particular, is under scrunity. He’s not scored a ton for over a year. GSmith has had is issues against Johnson in the past, but never faced him with a moustace before.

13:29 Peterson gets rid of Johnson. He’s gotten two very important sticks, Peterson. Even though the deliveries to get them haven’t been great. Johnson goes for his wild slog across the line and he’s bowled.edging onto his stumps. Out for 33 off 54. Australia 391-9. Here’s Lyon.

13:10 Peterson and Duminy spent most of the lunch break practicing their bowling out in the middle. Duminy into the attack after lunch.

12:30 LUNCH on day two. A good session for South Africa. Their bowlers were a bit struck down by illness yesterday with Dale Steyn having a bit of a stomach ailment and Vernon Philander feeling a bit fluey. As a result, there was a lot of testing of patience and Australia wont he battle. This morning, that changed. There was probing, there was oohing, edges, and a few words exchanged. Mitchell Johnson and Ryan Harris are out in the middle with Australia on 374-7. Steve Smith said yesterday that there’s no real run-target in mind, they just want “as many as they can get”. The pitch is flat, the weather is hot and it’ll be a great few days for batting if South African can get in.

12:12 South Africa’s bowlers have been much more probing this morning. Still, the 233-run stand between Marsh and Smith is  third-highest for any wicket in Centurion, and the best by overseas batsmen. Australia 363-7.

11:55 AndPhilander strikes. That irksome piece of work Shaun Marsh departs for 148 off 288. He gets a standing ovation fromt he small crowd in here.  South Africa have been making Australia play today and it’s worked. Philander gets Marsh to edge through to Smith in the slips. Here’s Siddle. Australia 348-7.

11:44 Morne Morkel is back on the field. He’s doing some warm ups. Should probably get a bowl soon. It’s all very involved, the warm up things. It’s tiring just to watch.

11:35 REVIEW and a wicket! South Africa think they have Haddin leg before, he’s reviewed it….that’s plum enough to pick from a tree.  MASSIVE wicket for Proteas. Haddin is gone for a quacker. Australia 332-6, here’s the man with the moustache.

11:25 Steve Smith has his ton. Easy single through square leg off Robin Peterson takes him there. Marsh rubs salt in the wounds by cutting for four more. Australia cruising 329-4.

11:23 This is now a record partnership between Marsh and Smith.  Highest fourth wicket partnership at Centurion, beating the previous best of Ashwell Prince and Herschelle Gibbs, who put on 213.

11:16 After a burst from the quicks this morning where South Africa made Australia play all the time and a few excitable appeals, Robin Peterson is back to allow Steve Smith to get his hundred. Australia 315-4, Smith on 96

10:54 Ryan McLaren was the man tasked with facing the press post-play yesterday. Here’s a short video from the press conference.

10:51 Aussie scribe Jesse Hogan has a n interesting stat. He says: Since mid-2010 SAf only conceded six 200-plus partnerships. Four of them have been against Australia: Clarke-Hussey (x2), Clarke-Cowan, Marsh-S.Smith.

10:39 Numbers. The 200-run partnership has come up between Shaun Marsh and Steve Smith and Australia have also just brought up their 300. It’s very hot and very sunny here at Centurion. The pitch is flat and dry and it’s all a bit tea-pot stature out there.

10:37 Not good news first up, if you’re a South African supporter. Morne Morkel is not on the field, he’s having a scan on his shoulder after falling awkwardly yesterday. Woke up stiff and sore.

10:17 Good morning and welcome to live updates from day two of the first Test between South Africa and Australia at Centurion. We’ll be giving you updates as they happen once again. If you tried to email us yesterday, we apologise for not publishing your thoughts, there was a slight technical glitch.