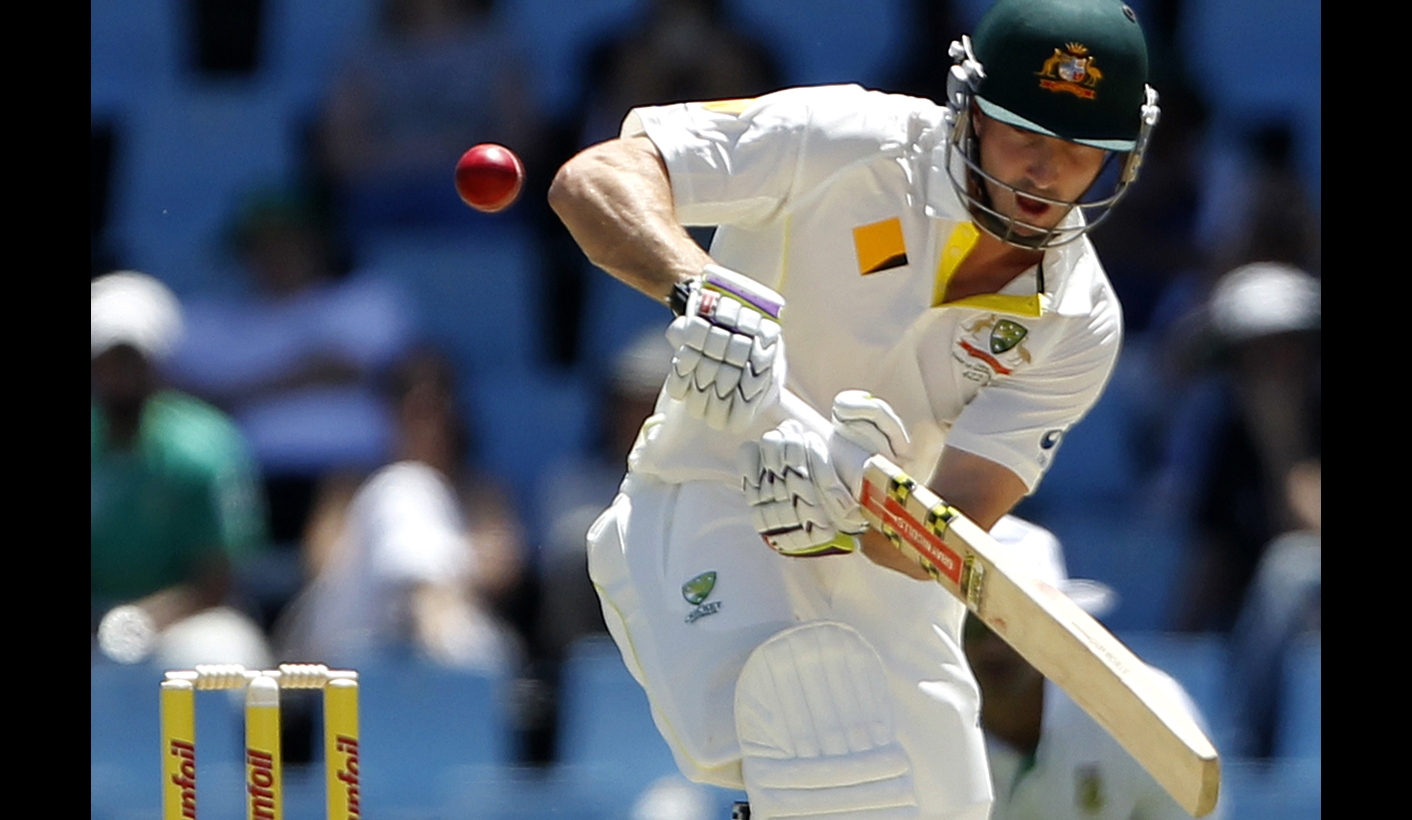 Unlikely hero Shaun Marsh led Australia to pole position on day one of the first Test against South Africa. ANTOINETTE MULLER picks five talking points from the action at Centurion.

Australia went from having their chips down at 98-4 to being in the pound seats at 297-4 by the end of play on day one. Shaun Marsh and Steve Smith combined for an unbeaten 199-run partnership as the South African bowlers toiled in the blistering heat.

It was a frustrating day for Graeme Smith’s men, and you can catch up on the action as it happened from our  live blog here. Below are five talking points from day one of the first Test between South Africa and Australia.

Graeme Smith won the toss and elected to bowl first on a rather dry and slow-looking pitch. The turf had been quite green in the build-up, but returned to a normal-looking track in the last two days. Smith, strangely, opted to bowl first. Ryan McLaren explained that the thinking behind the decision was due to stats showing that teams who bowl first at Centurion generally win. South Africa have won nine of their matches bowling first at the venue, out of the 19 times they have played there. The stats certainly back up the explanation, but if South Africa were trying to, perhaps, play a little bit of mental cat-and-mouse with the Aussies, it wasn’t going to happen. Michael Clarke said that he would have batted first and Steve Smith said that he was surprised that South Africa decided to send them in to bat. The pitch flattened out, the ball softened up and Australia stepped up a gear to gain the advantage by the end of day one.

Why bother with a spinner?

Robin Peterson, bless him, is a very nice guy. He’s a hard worker and he really has improved in the last few years. However, South African surfaces have not been very friendly to spinners and Australia are very, very good at playing them. They proved as much during the recent Ashes series when they handled the superior Graeme Swann without a bother. Peterson was never going to make a massive impact against a side so good at playing spin and certainly not non a normal surface. South Africa continue to hover in cautious cauldron instead of going completely left-field. Rory Kleinveldt is in the squad and could have provided an extra bit of oomph with the ball with JP Duminy and Faf du Plessis filling the spinner role if needed. Peterson, although expensive, can take wickets when the pitch starts breaking up, and with the weather set to be hot for the next four days and the pitch most likely to break up, he has a chance to make up for this inefficiency in the second innings.

Shaun Marsh wasn’t even supposed to be on the tour. He failed a fitness test after being named in the squad. Then Shane Watson got injured and Marsh was drafted in and selected ahead of Phil Hughes. In 85 first-class games, he had averaged just 35.02 with only eight hundreds to show for his efforts. In the six first-class games he’d played for Western Australia this season, he averaged just 34.37 with no fifties and one hundred. Statistically, his place was absolutely not justified. He only arrived in South Africa three days ago and he might even have a little bit of jet lag. Added to that, Marsh looked to be struggling towards the latter part of his innings, especially with running between the wickets. Steve Smith said he wasn’t aware of anything being wrong with him other than being “a bit cooked” because of the heat. His effort was outstanding and almost certainly one of the highlights from the Test so far.

Clarke’s yo-yoing around the order returns

Michael Clarke often says he likes to bat where is best for the team. On Wednesday, it would have been best for him to come in at three, but instead he ended up hiding at number five. That still didn’t help him much as he only managed 23 runs. The left-hand, right-hand combination of Shaun Marsh and Alex Doolan was a possible explanation for the demotion. But there is another possible explanation and it’s far more simple. Maybe Clarke was a little bit scared of strolling out to the middle to face up to Morne Morkel. South Africa’s bean pole bowler was getting bounce that made it look like they game was being played on a squash court. Morkel was fierce all day and roughed up Chris Rogers with a bouncer before getting him out. His in-your-face bowling probably wasn’t quite what Clarke wanted to face so early on in the Test. Clarke’s batting position has never been quite certain, but he has mostly batted at four in the last year, a shift which followed after this charges were annihilated by India in 2013. The results have been somewhat mixed. He averaged 40.46, but passed 30 just thrice. All three times, he scored over 100 – not exactly the most consistent.

Ryan McLaren has been given a chance to slot in lower down the order with the bat and take up some extra bowling. His first spell, with a harder ball, was good, tight and persistent. McLaren doesn’t really offer anything that South Africa don’t have in the bowling line-up already. Parnell would have offered something different. With his left-arm bowling, he’d have created some rough for the spinners and, if it was needed, he could offer the option of bowling a really fast spell of four overs or so to rattle the opposition. South Africa didn’t want any of that and stuck with a conservative way of thinking, and while it’s far too soon to judge what kind of an impact McLaren can have in the long-term, on a long, frustrating day like Wednesday, a little bit of Parnell magic would have done wonders.