Operation Clean Sweep: not just a clean-up but a purge of the poor 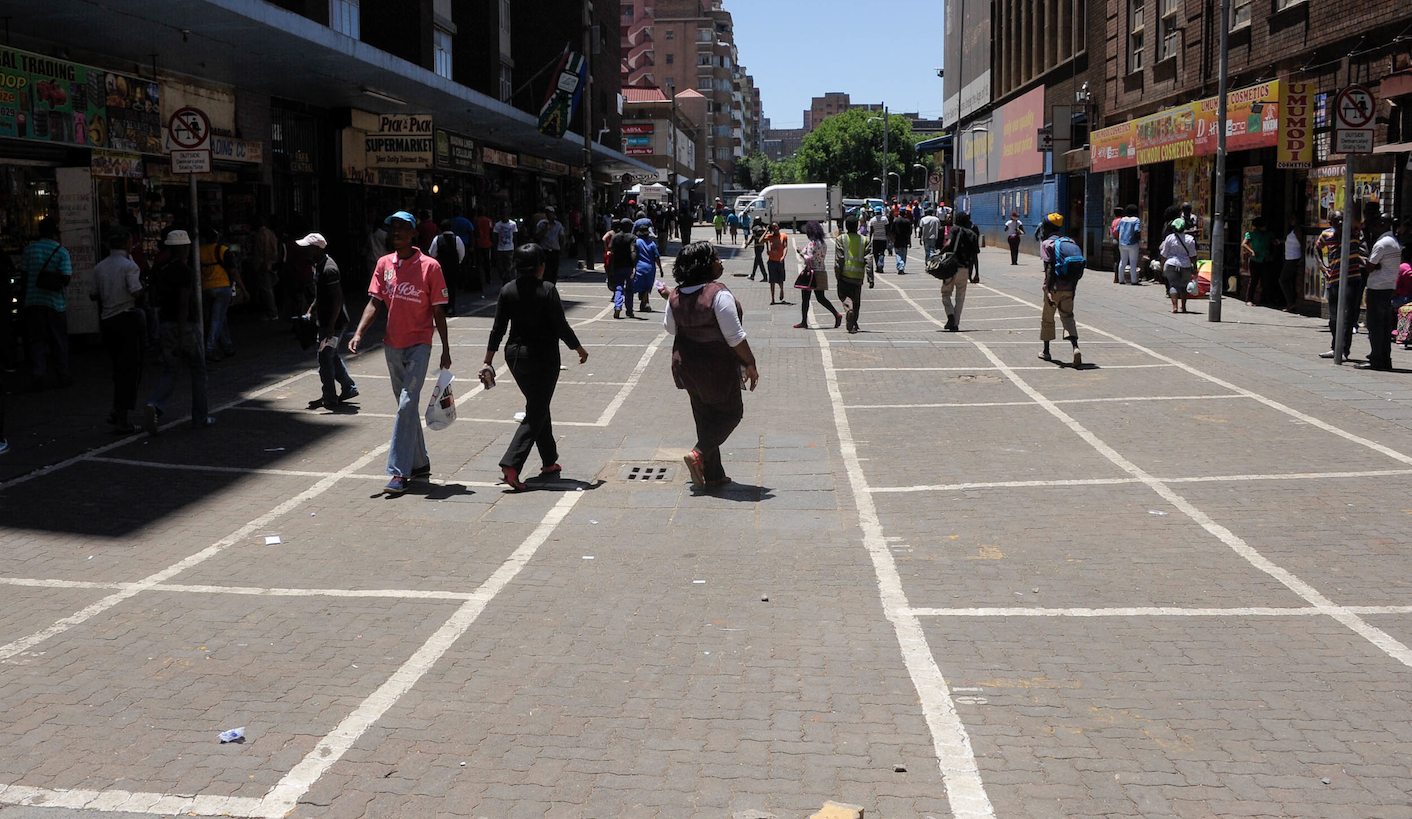 Despite providing jobs and contributing to the economy, Johannesburg’s street traders have been chased away while Mayor Parks Tau pushes a broom through the inner city. GREG NICOLSON & THAPELO LEKGOWA walk the streets to find out what’s happening.

There’s a faint feeling of absence in the Johannesburg CBD. At first, it’s hard to define what’s changed. The streets are quieter; the footpaths feel wider. The buildings, the taxis, and streets remain. But the footpaths are bare where street traders once stood. The piles of clothes near Noord Taxi Rank, loved by students and hipsters, are gone. There are no longer stacks of shoes outside the provincial legislature. The fruit, vegetable, clothes, socks, hat, linen, and jewelry stalls lining the walkways have vanished.

“I don’t want to lie to you, it is very sour,” says 22-year-old Bridget Khayisa. Her mother, Nomalanga, sold food on the streets for 14 years before the Johannesburg Metro Police Department (JMPD) confiscated her stock, worth R1,000, in October and told her to leave until further notice.

“I’m not going to write my exams because we haven’t paid the fees,” says Bridget, who started an IT course when she couldn’t find work after completing matric. “I am very scared because if I can’t write now….” She doesn’t finish the sentence.

Nomalanga’s income is gone. She has another child at university in Durban. “My bills are up to here,” she gestures. “My phone is ringing non-stop. I didn’t pay the varsity fees, so my child is out of the university now.”

In the same block of flats, other traders have kitchens full of stock and families full of stress. Upstairs, in 47-year-old Elizabeth Mhlongo’s flat, informal traders discuss their worries. They have bills to pay but their income has stopped. They started selling on the streets because jobs are hard to come by and they wanted a decent life for their families. Their flats are small but have furniture settings and televisions. They are the breadwinners, paying bills, and education fees.

One woman says she has spent time on the streets with her children, back when Thabo Mbeki was president, and police kept confiscating the vegetables she was trying to sell. Now, they all fear the moment when they can’t pay rent and they and their families and the families of their workers will be stranded.

“A coordinated crime and safety enforcement effort will ultimately improve the livability of the inner city,” said the mayor in this year’s state of the city address, speaking on inner-city regeneration and boosting the residential property market.

The magnitude of the informal trading sector “brings with it unique challenges such as increased congestion, illegal dumping, public urination, infrastructure maintenance, the enforcing of bylaws and potential urban decay,” added City of Johannesburg spokesperson Nthatisi Modingoane in a recent press release.

‘Clean Sweep’ links informal trading to the city’s other problems. For years, the City of Johannesburg has been concerned about the CBD’s overcrowding, decrepit and hijacked buildings, crime, rubbish, homelessness and economic decline.

“Clean Sweep is a strategic intervention vehicle which seeks to tackle service delivery challenges in the inner city,” says Modingoane. He links the initiative to plans like the Integrated Service Delivery progamme, Ward Based Planning and the Jo’burg Ten Plus and the Jo’burg 2040 – Growth and Development Strategy.

Through ‘Clean Sweep’ police have made 247 arrests, including arrests of 192 illegal immigrants, three firearm related arrests and 10 arrests for business robbery. There have been 3,593 parking citations and 3,767 instances of impoundments, including 528 for counterfeit goods.

Modingoane assures the public that the City knows the importance of informal trading. “The informal trading sector is vital to the city’s long-term economic development plans as well as to the social fabric of the city.” But the process of ensuring traders are registered and the system is aboveboard is complicated, he adds.

“The sheer volume of informal trading, therefore, brings with it unique challenges such as increased congestion, illegal dumping, public urination, infrastructure maintenance, the enforcing of bylaws and potential urban decay.”

Official policy allows trading in demarcated areas for those with smart cards from MTC. During ‘Clean Sweep’, traders were initially being verified on seven streets but the City has expanded that to 17 streets: Noord, King George, Hoek, Wanderers, De Villiers, Albertina Sisulu and President, Plein, Bree, Von Weilig, Jeppe, Twist, Delvers, Goud, Diagonal, Hancock and Joubert. Since the process began the City has realised there are problems with overcrowding, discrepancies with how many stands are actually on the streets compared to the officials database, and stands that are leased illegally.

But the widespread crackdown is also an attack on the working poor. Cosatu said the initiative “is tantamount to local economic genocide”. Spokesperson Patrick Craven says the City is going against its own plans. Organisations such as the MTC have failed and the City of Johannesburg is ignoring its own Spatial Development Framework and City Improvement District plans, which embrace the informal economy’s contribution, he says.

Said Craven: “The JMPD continues to break down trading facilities and infrastructure previously provided for by regeneration plans and Spatial Development Frameworks in the inner city. This is pure vandalism and anarchy. Rather than build on the basis provided by the plans, a cowboy approach has been adopted to destroy what has been built by the money of workers who pay tax and tariffs to the city.”

Edmund Elias, spokesperson for the SA National Traders Retail Alliance and who has sold books on the street for 20 years, is outraged at the “anti-poor campaign”. He disputes the claim that without traders the city is safer.

“Illegal Hillbrow street traders were targeted yesterday yet well known drug hotspots were left untouched, further evidence that the mayor’s total focus is on the poor. He regards selling apples to be a bigger crime than selling drugs,” Elias wrote on Monday. He estimates 4,000 traders are directly affected and says up to 20,000 people could be indirectly affected.

Tanya Zack, who has over 20 years’ experience working in the city as an urban planner and is working on a book on the inner city, wrote an open letter about what she witnessed during ‘Clean Sweep’.

“I saw a person being dragged out of his vehicle. I saw a JMPD officer threaten a female trader with a broken stick, and pull the trader by the arm. I heard her shout at the trader, ‘If you want me to fuck you up I will. I have tolerated you for too long.’ I saw policeman hit a man on his head with a stick. I saw another policeman grab a long pole from one of the shops and use it to prod and hit and threaten people as he ran down the road shouting at people to clear away. I saw 15 JMPD officers surround two people they seemed to have arrested and who were sitting on their haunches. I saw a JMPD officer whip people with a long whip.” Such stories are now common on the street.

“Life is now difficult as the savings are running dry,” says Benjamin Ozoemena, a foreign national who sold clothes on the street. “All we do is walk on the streets all day which now will lead us to thinking evil. Trading is the only thing I have ever done since coming to South Africa. I have rent to pay and school fees for my kids.”

He has a permit from MTC to trade until 2015. “We see this as a xenophobic exercise as they started with us on De Villiers Street and they later moved on to taking out the locals as a cover up to their xenophobia,” says Ozoemena.

Chidube Ogbonna, another foreign-national trader who has been put out of work, says he pays R100 a month in rent to MTC. “The terms and conditions behind our permit have been ignored totally by the City when performing their clean-up. This did not only affect me [but] my employees, my family, and all those people who used to buy from us to go and trade also in their respective areas.”

When the police came, they told the traders the streets need to be cleaned up. “[But] the operation seems to only be targeting us traders. As you can see, outside [near Bree taxi rank] people are gambling and we now see that as legalised gambling by the city,” says Ogbonna.

The traders want to take the City to court for flouting its own informal trading by-laws and harming their livelihoods. While all informal traders, legal or illegal, have been forced off the streets; while hard-working families worry about going hungry; while the City of Johannesburg has shown it was hopelessly unprepared to verify registered traders; while jobs are cut during a crisis of unemployment, one would think they deserve a decent chance. DM

Photo: Painted squares demarcated stalls for informal traders on a Johannesburg street. Since the Clean Sweep, the area is empty. (Photo by Thapelo Lekgowa)