In pictures: The cost of Jo’burg’s Mayoral Clean Sweep 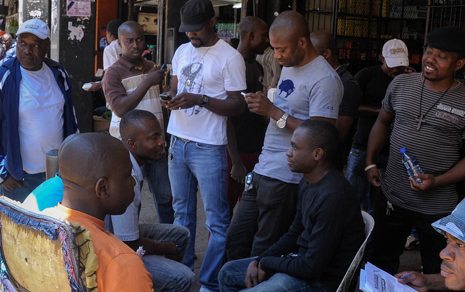 The City of Johannesburg’s “Mayoral Clean Sweep” began over a month ago to end illegal trading, dumping, building invasions, and promote city pride. The City says it is undertaking a “verification process” for informal trading. Meanwhile, thousands of informal traders have been denied a living as police stringently enforce the initiative. GREG NICOLSON & THAPELO LEKGOWA look at the issue through photos and find heartbreaking stories of determined South Africans who are now struggling to pay basic expenses.

Edmund Elias, spokesperson for the SA National Traders Retail Alliance, has been selling books from this spot on Joubert Street for 20 years. The sign next to him indicates there is to be no trading outside designated areas. The yellow square is where he worked. The City of Johannesburg says it is engaging stakeholders and verifying traders in 17 streets, but the traders believe officials are delaying their getting back to work. (Photo by Greg Nicolson)

Police carry bags of confiscated stock from a street trader. People say the Johannesburg Metro Police have been ruthless, confiscating stock from anyone they find trading, treating people rudely, and even hitting some with sjamboks. (Photo by Greg Nicolson)

An informal fruit and vegetable trader (who did not want to be named) sits in her Johannesburg flat. She has three children and has been the sole breadwinner since her husband passed away in 2008. “I’m so traumatised I haven’t paid his school fees,” she says about her son at the University of Johannesburg. She has hardly had an income for over a month. “You know these days I have sleepless nights, and the kids. And I think it’s going to affect them because they are writing exams.” Another child is writing matric exams. She says she is not that educated and wanted a better life for her children. Soon, however, she won’t be able to pay rent: “One day they will end up street kids because we will be chased here from the flat.” The police came with only a day’s warning, she says, and put people who are trying to do something for themselves without the help of government out of business. (Photo by Greg Nicolson)

Elizabeth Mhlongo, 47, who also sells fruit and vegetables, supports her two children and two grandchildren and explains that each street trader supports other families through their jobs. These families in turn support other people. “We are reducing unemployment,” she says. “How many families are suffering now? They mustn’t count how many traders are on the street [are affected]. They must count how many people are affected.” Street traders work hard, starting at 4:00 in the morning. She is too distressed to continue talking. (Photo by Greg Nicolson)

“The street is absolutely unsafe,” says Laura Burocco, who lives in a nearby building and has come to one of the traders’ flats to buy her vegetables. There aren’t other alternatives nearby for fruit and veg. “It’s not nice walking around as a woman at night,” she says. When the informal traders were on the streets, they would protect her, she says. (Photo by Greg Nicolson)

The Joburg CBD is eerily quiet since the informal traders have been forced off the streets. Traders once filled these stalls near the corner of Jeppe and Sauer Streets. (Photo by Thapelo Lekgowa)

Some traders have found other spaces to work like this building where items of clothing, which would usually be sold on the street, are piled on the floor. (Photo by Thapelo Lekgowa)

Police have dismantled and removed some of the structures where traders used to sell. The remnants of these can be seen near the Noord Taxi Rank. (Photo by Thapelo Lekgowa)

Displaced informal traders hang around the city with little to do. (Photo by Thapelo Lekgowa) DM