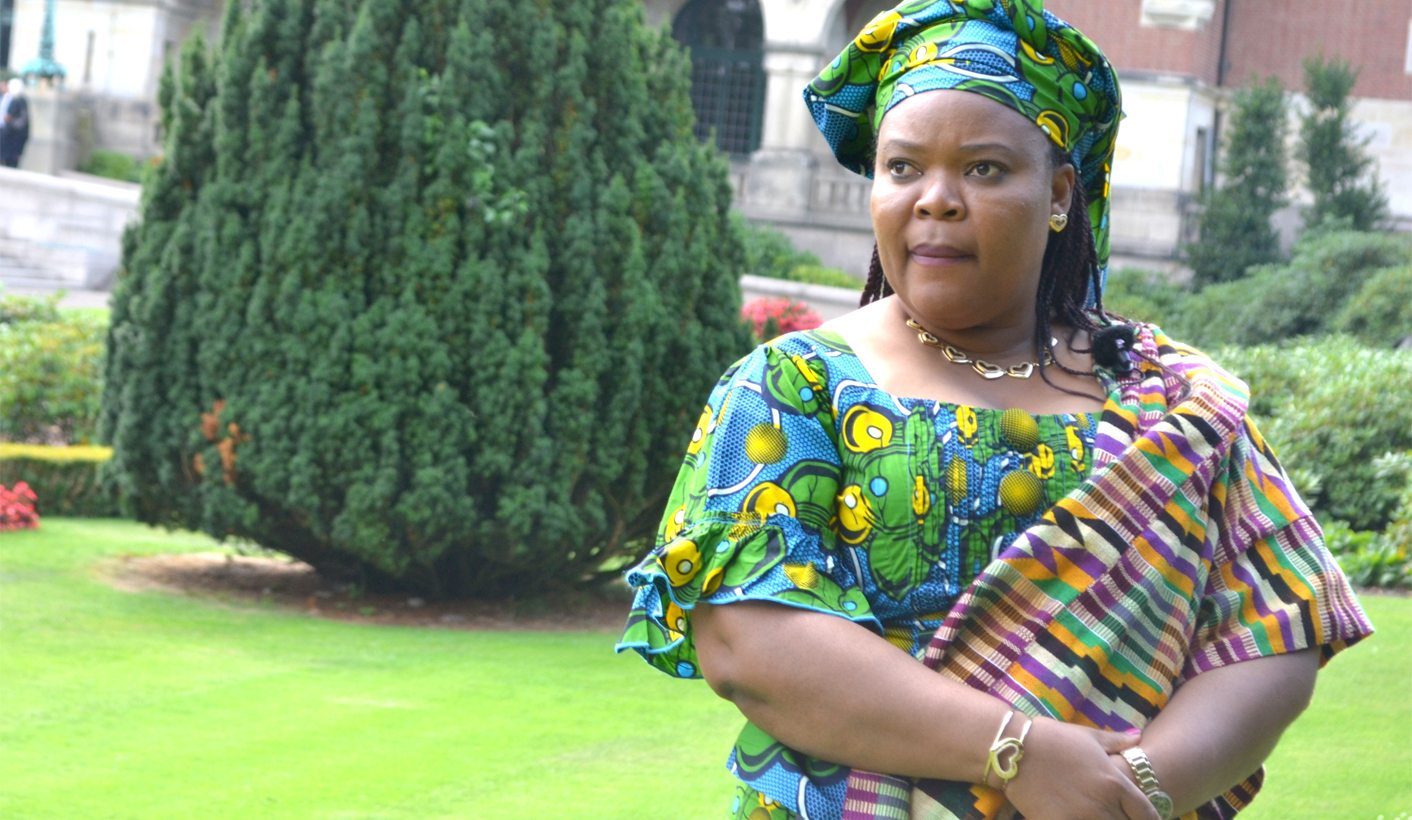 KHADIJA PATEL caught up with Nobel Laureate Leymah Gbowee in The Hague, discussing her thoughts on peace, justice and the role of women as a force for reconciliation.

“When war criminals are brought to The Hague and await trial, in the meanwhile they live well, they eat well, whilst the victims of war live in places where they don’t even have anything to eat – and someone like Charles Taylor is available to see his wife, have sex and have more children whilst he’s in prison. And some of the horrendous rapes women have gone through have stopped them from ever having babies. The question you have to ask yourself is, ‘Is this justice?’”

Leymah Gbowee, who won the Nobel peace prize in 2011 with Liberian president Ellen Johnson Sirleaf, is deep in conversation with librarians from the Peace Palace Library in The Hague when I find her. We are both in The Hague to celebrate the centenary of the Peace Palace, and earlier that day she had unveiled a bust of Bertha von Suttner, significantly the first bust of a woman in the Peace Palace.

Gbowee, however, is no stranger to asserting the rights of women in a male-dominated environment. After all, she won the Nobel Peace Prize for “ending Liberia’s civil wars, and for her efforts to promote peace, democracy and women’s rights in Africa”.

And even at the Peace Palace, when she was denied entrance into a press briefing with UN Secretary General Ban ki Moon and the Dutch Foreign Minister Frans Timmermans, she asked afterwards, “Would they treat Desmond Tutu like this?”

But if Gbowee comes across as something of a diva at times, her stress on the way women are treated in settings like these, however, is not amiss. She says women in leadership are more thoughtful. “They take steps back, to see the effects of their policy. And evil is in everybody, in men and women. Men are more about socialising and patriarchy.”

In The Hague, however, she was especially derisive of the conditions prisoners enjoy when they are incarcerated.

“The idea of the ICC is great but I believe it is detached from the people who are affected by some of the things that happened. It sends a good political signal to the world that we will no longer tolerate dictators, mass murderers. But comparing their life in prison, with three meals a day, with the life of their starving victims…

“Former President Charles Taylor sent a letter recently [saying] that the African prisoners are discriminated against as their children who come to visit have very little space to play and the Europeans prisoners have a better place for their children to play. You ask yourself: ‘What the hell is this?’

“You have people who have been amputated because of their actions. They and their children will never enjoy the joys of playing. And you are sitting somewhere and you complain about racism. It is a difficult thing to comprehend, but I think we still have a long way to go,” she says.

Gbowee, however, rankles at suggestions that the current system of international justice is skewed to focus on Africans.

“We should be irritated by our political African leaders who treat people as private chattel on their farms. We should be irritated with our leaders. They need learn to conduct themselves and treat their people in a human way. Charles Taylor behaved like a gangster and did not fulfil the hopes of the ones who elected him to give him the chance to lead.”

While the threat of international intervention in Syria cast an imposing shadow over the celebrations at the Peace Palace last week, Gbowee pointed out that the discussions around Syria now excluded those most affected by the decisions that will be taken in the next couple of weeks.

“Today we are talking about drone strikes in Syria, but in fact it is about the strength of the US and the UK versus the strength of Russia, China and Assad. No one is considering the casualties in the rebel areas and the Assad areas. There are two opposing forces. In the midst of all this, there is a kebab seller in the South of France who has lost his wife and mother and has no idea where his children are. Until we bring the whole discourse around peace and justice to those people who have been impacted and not foreign governments, political leaders, political solutions, we will continue to miss the mark.”

After posing for photos in the gardens of the Palace, the unmistakable sound of protests outside drew Gbowee. While the protesters were ignored by nearly all the other dignitaries who had gathered in The Hague, Gbowee believes that is crucial for activists like herself to go “back to their roots” to recall what it is that ought to be driving their work.

While Gbowee now resides in New York where she works as a lecturer, she has been criticised for effectively abandoning Liberia in favour of pursuing her own career. She, however, claims that her criticism of the Liberian president Ellen Johnson Sirleaf has embittered many Liberians towards her.

“Last year I was critical of president Sirleaf and for three months I was isolated. Local papers wrote stories about my private life, women made a position statement that I was a disgrace to women…For the first time I had to walk with bodyguards in Liberia. I could barely go to places. The church that my parents went to, my dad is on the elders council, they called a meeting without him, called the pastor to ask them to leave the church. People who I thought were my friends really turned against me.

“It’s August now and everything that I said last October, that I was bashed for, everyone now goes back to say, ‘Oh, Leymah said so’.” DM