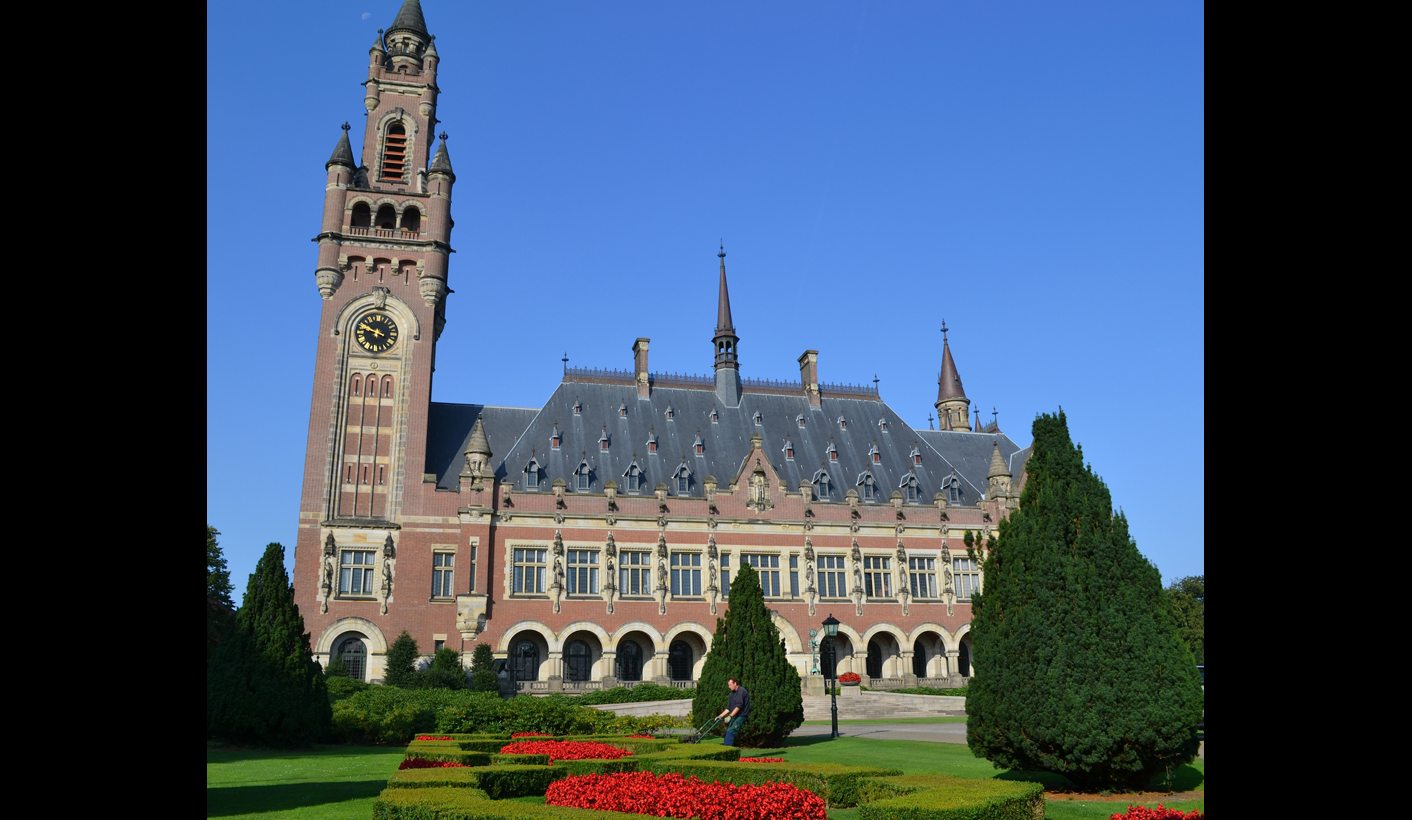 On Wednesday, the Peace Palace in The Hague celebrated the 100th anniversary of its inauguration. KHADIJA PATEL toured the palace this week and sent home some pictures.

On Wednesday, the Peace Palace celebrated the 100th anniversary of its inauguration. The building, whose construction was funded by Andrew Carnegie in the early 20th century, hosts two crucial tenets of the global justice, the international court of justice and the permanent court of arbitration.

The United Nations flag flies in the gardens of the Peace Palace. The International Court of Justice (ICJ), the principal judicial organ of the UN, which is based at the palace, is the only one of the six UN principals based outside of New York. The Peace Palace remains the property of Carnegie’s foundation and the ICJ leases space within it at a rate of more than 1.26 million euros annually.

Peter Tomka, the president of the International Court of Justice, which deals only with disputes between states, says the court currently has 10 cases in its docket. And while some accuse the ICJ of working too slowly to be trusted with disputes of grave importance, an employee of the court admitted that the court was a dinosaur, adding however that it was “an efficient dinosaur”.

While Andrew Carnegie constructed the shell of the Peace Palace, many of its furnishings, art and décor are gifts from nations to the palace. Here, in the foyer of the palace, a man photographs a statue of Lady Justice, which was a gift to the palace from the United States of America.

The bronze replica of the statue of Christ in the Andes on the border between Chile and Argentina is a gift to the palace from Argentina. The original statue is made of recast cannons of these two countries and symbolises peace between the two countries. The presence of a symbol of Christianity in the palace is said to have frustrated one Dutch queen, who asked whether the presence of the statue signified that the facilities were available to Christians alone.

Although the International Criminal Court is based elsewhere in The Hague, the image of international justice has suffered in the eyes of Africans, who believe the ICC focuses its attention on the African continent unfairly. To date, the ICC has only indicted Africans, prompting many African leaders to argue that the ICC wilfully ignores crimes committed in other parts of the world. African leaders have also threatened to withdraw the Rome Statute, the treaty that created the court.

This is one of the Africans in The Hague’s judicial facilities that Africans need not be ashamed of. The bust of Nelson Mandela, which was unveiled in the palace by former minister of justice and constitutional development Bridgitte Mabandla in 2005, is the only African presence among the busts and statues of celebrated jurists and legal minds in the Peace Palace.

The Permanent Court of Arbitration owes its roots to Russian Czar Nicholas II, who organised the Hague Peace Conference of 1899. The PCA mediates conflicts between various combinations of states, state entities, intergovernmental organisations, and private parties.

The Japanese room on the first floor of the palace is the venue of the Permanent Court of Arbitration’s meetings. The room contains a specially designated chair for each member country’s delegate, the back of each of which is embroidered with the country’s coat of arms. South Africa’s seat stands out prominently here, but according to curators at the palace, delegates will be asked not to lean against the backrest of the chair, lest they disturb the intricately set embroidery. DM

Main photo: The Peace Palace has been abuzz with the frenzied efforts of curators to prepare the building for its 100th birthday party this week. While a gardener mows the lawns ahead of Wednesday’s ceremony, the palace’s gardens are said to be considered among the most successful designs of English landscape architect Thomas Mawson. According to guides at the Palace, Mawsom deliberately excluded plants with dark-coloured leaves from the garden for not fitting in with the theme of peace. It was a reminder that the entrenchment of racial prejudice in society is often reflected where it is least expected.