Marikana prepares to honour the fallen 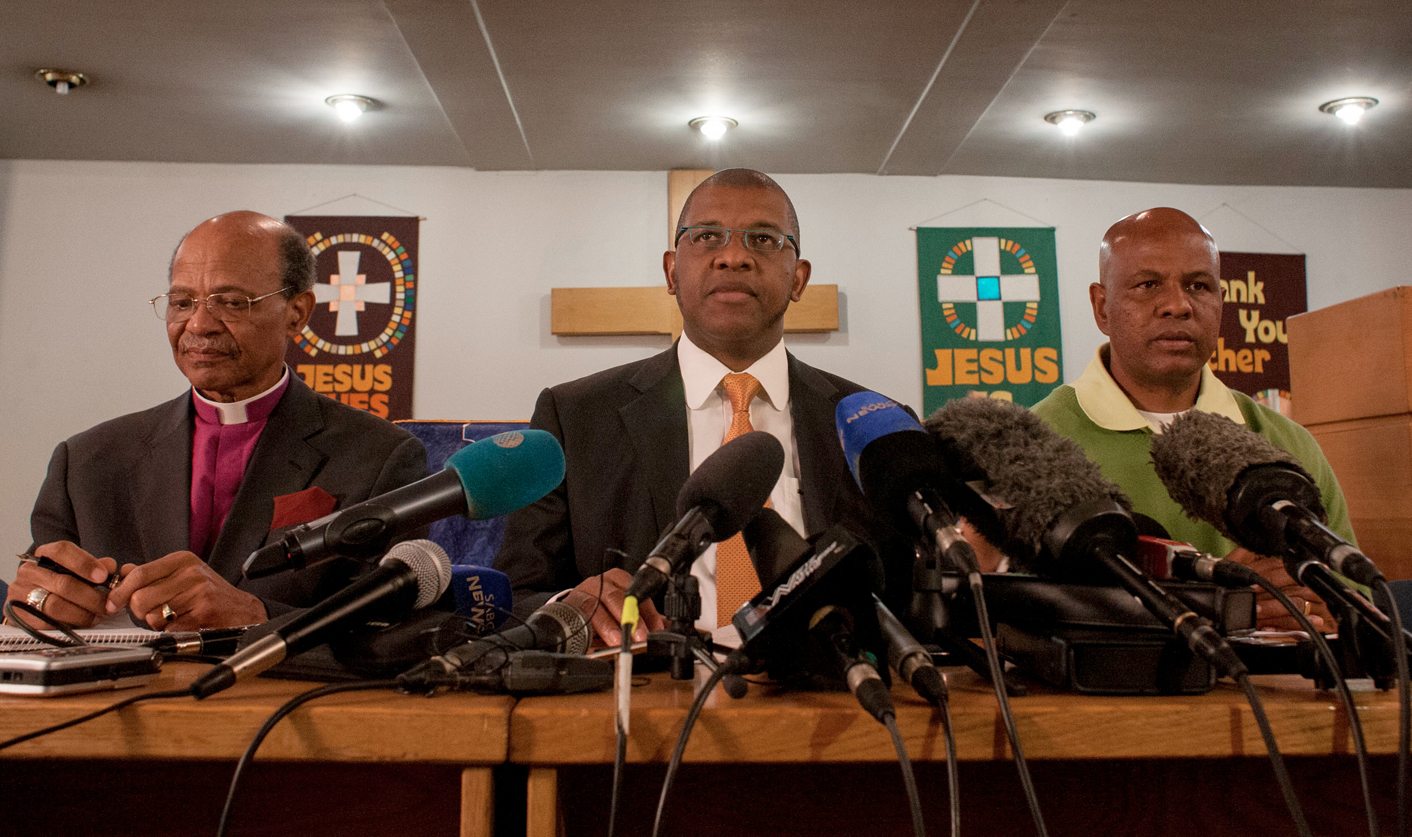 Friday marks one year since the fateful week, which saw 44 people killed in Marikana during strikes for higher wages at platinum miner Lonmin. A memorial is planned and the warring unions say they want to put an end to the continuing bloodshed. Little has changed, but both the Association of Mineworkers and Construction Union and the National Union of Mineworkers say they are serious about giving peace a chance. By GREG NICOLSON.

Organisers of the commemoration event for the anniversary of the Marikana killings announced their plans on Tuesday. “They died for a living wage” is the theme of the day, “the struggle for R12,500 continues.” The memorial will take place at the koppie where police were filmed gunning down striking mineworkers. “Never did we believe that our government would turn their guns on our people in such a brutal and callous fashion,” the statement from the Marikana Massacre Anniversary Organising Committee who added that the miners did not die in vain. “They stood their ground on that fateful day convinced of their right to negotiate for a living wage, inspiring tens of thousands of workers to follow in their footsteps.”

The committee chose advocate Dali Mpofu, bishop Jo Seoka, and Association of Mineworkers and Construction (AMCU) president Joseph Mathunjwa to finalise the logistics and plans of the event. The three were selected because of their ongoing work with the affected mineworkers and their involvement directly before and after the shootings.

The committee expressed frustration that little has been revealed by the Marikana Commission of Inquiry, which is beset by challenges in moving forward, and that no police have been arrested. “The shooting was a one-sided affair – a massacre – and it continued for 20 minutes after the first shots were fired. Many lives were lost and many of our comrades are now permanently disabled. Many questions remain unanswered: Who gave the senseless order? Who sanctioned the murderous tactical plan of ‘disperse and disarm’, to be followed by the use of live ammunition if that failed to achieve its desired objective?”

Mpofu, Seoka and Mathunjwa, however, stressed that the commemoration event would mourn all who were killed, including the security guards and police, and promote peace in the platinum belt. They said National Union of Mineworkers (NUM) president Senzeni Zokwana is invited to join his rival Mathunjwa on the stage to deliver a shared message of peace. “One must not get tired of preaching peace. Peace it’s a process. It should be ongoing,” said Mathunjwa.

Seoka added, “Any citizen of this country that was affected directly or indirectly is welcome. It will be unfortunate if the interpretation is that it will be an AMCU event. It is not.”

President Jacob Zuma will not be attending the event as he has a SADC summit scheduled in Malawi. North West Premier Thandi Modise’s spokesperson couldn’t provide her plans before Daily Maverick’s deadline. Talk of the Economic Freedom Fighters wanting to attend could not be confirmed.

NUM spokesperson Lesiba Seshoka told Daily Maverick on Tuesday evening the union had not yet received an invitation but would like to be a part of the commemoration. The union had planned its own service but Seshoka said it makes sense to hold just one event. Having listened to Mathunjwa on the radio, Seshoka said the AMCU leader sounds genuine about wanting to achieve peace and stability in the area, which has seen continued murders of both NUM and AMCU officials. “We believe with what he is saying, if he is saying that to the members and the NUM president would be there to address the members, peace would not be hard to achieve,” Seshoka said over the phone, adding that the situation needs strong leadership.

Nobongile Nora Madolo, a NUM shop steward, was killed in Marikana on Monday, adding to the many murders in the area since the shootings last year. Both prominent unions have criticised the police and justice department’s role in failing to apprehend suspects for the killings and offer preventative measures to the violence. Police minister Nathi Mthethwa was in Marikana on Tuesday to visit Madolo’s family. The SAPS searched Lonmin’s Karee mine hostel for weapons after the murder and say they will monitor the area ahead of Friday’s event.

Marikana residents, however, criticised the typical police response. Speaking in Johannesburg, multiple residents and mineworkers said after a killing the police come in heavy-handedly searching for weapons but they fail to investigate the killings or prevent the murders. Mathunjwa added that police show more concern when an NUM member is killed. “When it’s an AMCU member who’s been shot there is no harassment. There is no raid. There is nothing, so it shows clearly there is bias when [police] do their jobs … When it’s an NUM member who happens to be killed the SAPS is proactive, there’s high level meetings that are held immediately. There’s a plan of how to enter into the hostel or the residential areas of the members. But when it’s an AMCU member who has been killed everything is quiet. It’s just like a normal day,” he said.

While the violence continues, so do poor living conditions. “There is nothing tangible that one can show and touch and see that is changed and I think it’s not only for Lonmin, it’s in the entire mining [sector] that hasn’t stepped up their game to advance the better living of the working class in South Africa,” said Mathunjwa, echoing other comments at the event in Johannesburg.

The AMCU president was also angry at ANC comments referring to the union as cockroaches. Speaking at an NUM event last month, ANC Bojanala region deputy chairman Buti Makhongela reportedly said, “This AMCU is a small cockroach that needs a mild spray to solve it.” Mathunjwa said the comments show “this could be a second phase of Marikana planned by those that are affiliated to ANC who are saying those words.” ANC North West spokesperson Kenny Morolong told Daily Maverick the party is not aware of the comments but will investigate and express itself on the matter soon.

Such issues make peace seem unlikely, but in the short-term if leaders of the NUM and AMCU manage to share a stage on Friday, it could be a good start. But mineworkers have another challenge before the commemoration. They have applied to have the day off so they can mourn the dead and are still awaiting a response from Lonmin. DM