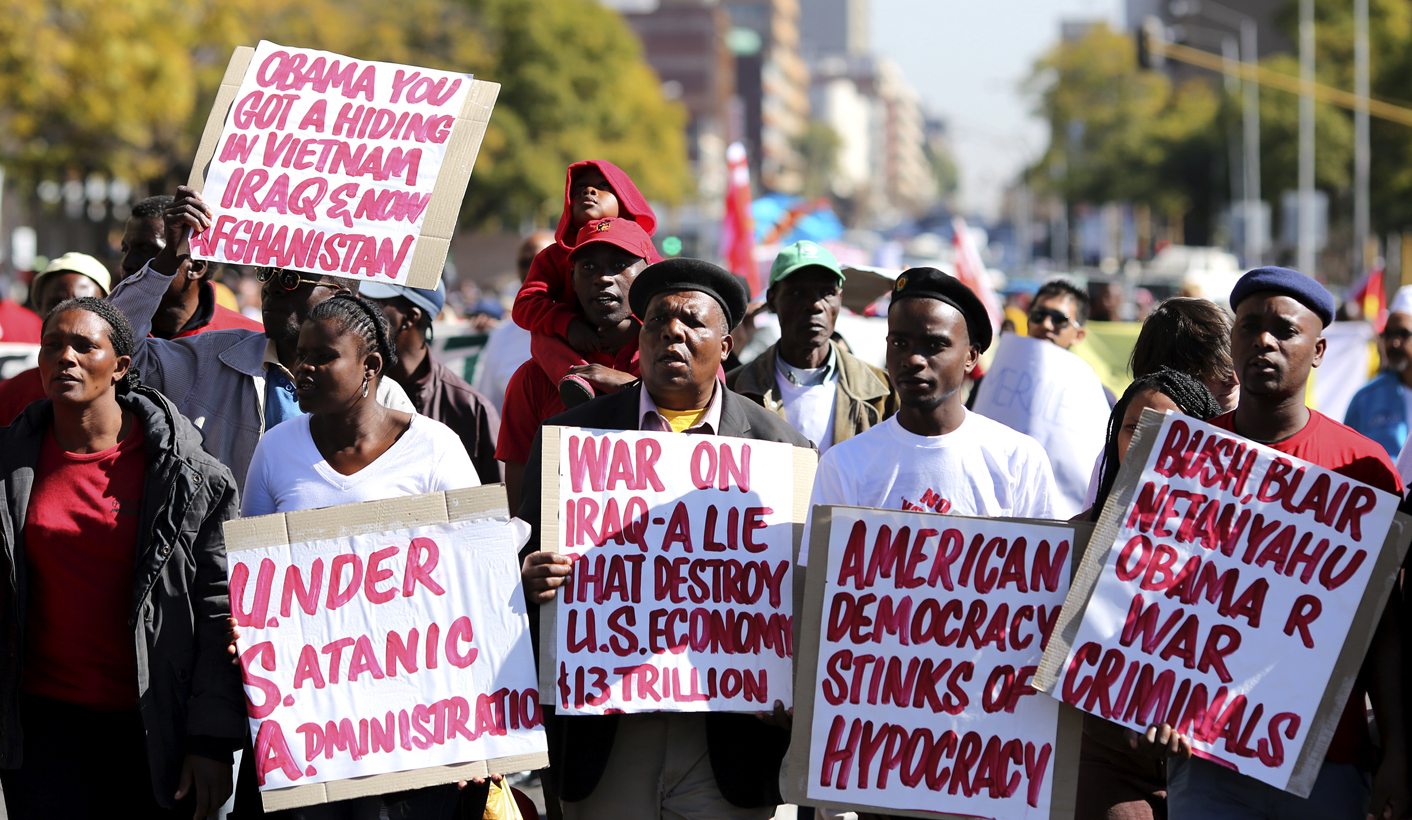 After weeks of planning, US President Barack Obama arrived at the Waterkloof airbase on Friday evening. But not everyone wants him here, and the protests against his visit have drawn support from across the political spectrum. By KHADIJA PATEL, JESSICA EATON & GOOLAM HASSEN.

The red carpet at the Union Buildings has been rolled out to welcome Barack Obama in his first visit to South Africa as a head of state. Obama’s arrival, however, has received a mixed response from the continent. Some in South Africa have greeted Obama’s visit as an occasion to celebrate, while others have been less enthusiastic. “The first African-American president lands in South Africa and some people protest,” an irritated Trevor Ncube (publisher of the Mail & Guardian) noted on Instagram on Friday night.

The protest movement against Obama’s visit kicked off with a march to the US Embassy on Friday morning. For weeks the ANC’s alliance partners the South African Communist Party and trade union federation Cosatu had encouraged their members to join Friday’s protest. And when busses chartered by Cosatu affiliates and the SACP began to arrive only partially filled, we did begin to wonder whether the tripartite alliance (because the ANC Youth League was among the coalition of those protesting Obama) had lost its ability to mobilise its members.

The distance between the leadership of the ANC and its alliance partners and its members was blamed particularly for the wave of wildcat strikes that struck the mining sector last year. The National Union of Mineworkers, Cosatu’s largest affiliate, simply did not seem to have a handle on what its members actually wanted. Between workers and union leaders, a disconnect emerged in which the actual needs of workers seemed to be a second order priority.

And yet by the time the march did leave the Caledonian Sports Field for the US embassy, a sizeable number of people had actually gathered. There were a number of trade unionists and SACP members. There was also a sizeable representation from the Muslim Students Association. But it was clear as well that opposition to Obamas’ visit to South Africa comes from more than just the SACP, Cosatu and Muslims.

Nigel Branken, an activist living in Hillbrow who attended the protest with his family, hung a poster around his shoulders saying, “No! You can’t spy on us!”, and said the Obama administration had failed the poor.

“This is a big issue that the US government has lost its way. They used to stand for democracy, human rights and civil liberties around the world but today they have corroded that image,” he said. “An example of that is the extrajudicial killing of Osama [bin Laden]. They claim to be a Christian nation but in Christianity you are supposed to love your enemies not kill them.”

Sedric Kibuala, waving a Congolese flag amid a group of Congolese living in Johannesburg who attended the protest, said Obama was worsening the crisis in the Democratic Republic of Congo through his support of President Joseph Kabila. “What I came to tell Obama is, Obama I hear that he’s got an African plans, but he’s not doing anything for Africa at all. So I’m not happy about that.”

A recurring theme of the protesters was Obama’s failure to fulfil the promises he made when he was on the campaign trail, particularly the closure of Guantanamo Bay.

Mzwandile Masina, convenor of the ANC Youth League’s National Task Team, said: “We are here to register our displeasure with the empty promises of Barack Obama.”

Thapelo Kgaritsi, a member of the National Union of Metalworkers of South Africa (Numsa), said Obama had also failed African Americans. “Obama is having problem in his own country, whereby our own brothers and sisters, the black Americans there, they fought so hard in order to elect him in the first place, because of those promises he made to them, but he didn’t deliver,” he said.

By the time the representatives of the many, many groups attending the protest took turns to address the crowd, protesters had already begun to disperse. A small group of protesters who burned an American flag excited the camera people (the protest was a break from hospital duty for many journalists) but was certainly not a coalescing moment for the protest. The protest was characterised by a cacophony of voices, a wide array of slogans and at most times, chaos. This was not a single, coalesced movement against Obama, or American policies or indeed even against the US itself.

The vast majority of protesters had left before the memorandum was delivered to embassy staff.  To them, the point of the protest was not the memorandum at all. But, in joining others on the streets of Pretoria they delivered a message anyway: Not everyone believes in Obama magic. DM

Photo: Protesters carry placards as they protest against the visit of U.S. President Barack Obama in Pretoria, June 28, 2013. REUTERS/Siphiwe Sibeko

Dissent within the ranks: Where does the opposition to Obama’s SA visit come from? in Daily Maverick