Cape Town: ANC's attempt at poolitics ends with a whimp...

Cape Town: ANC’s attempt at poolitics ends with a whimper 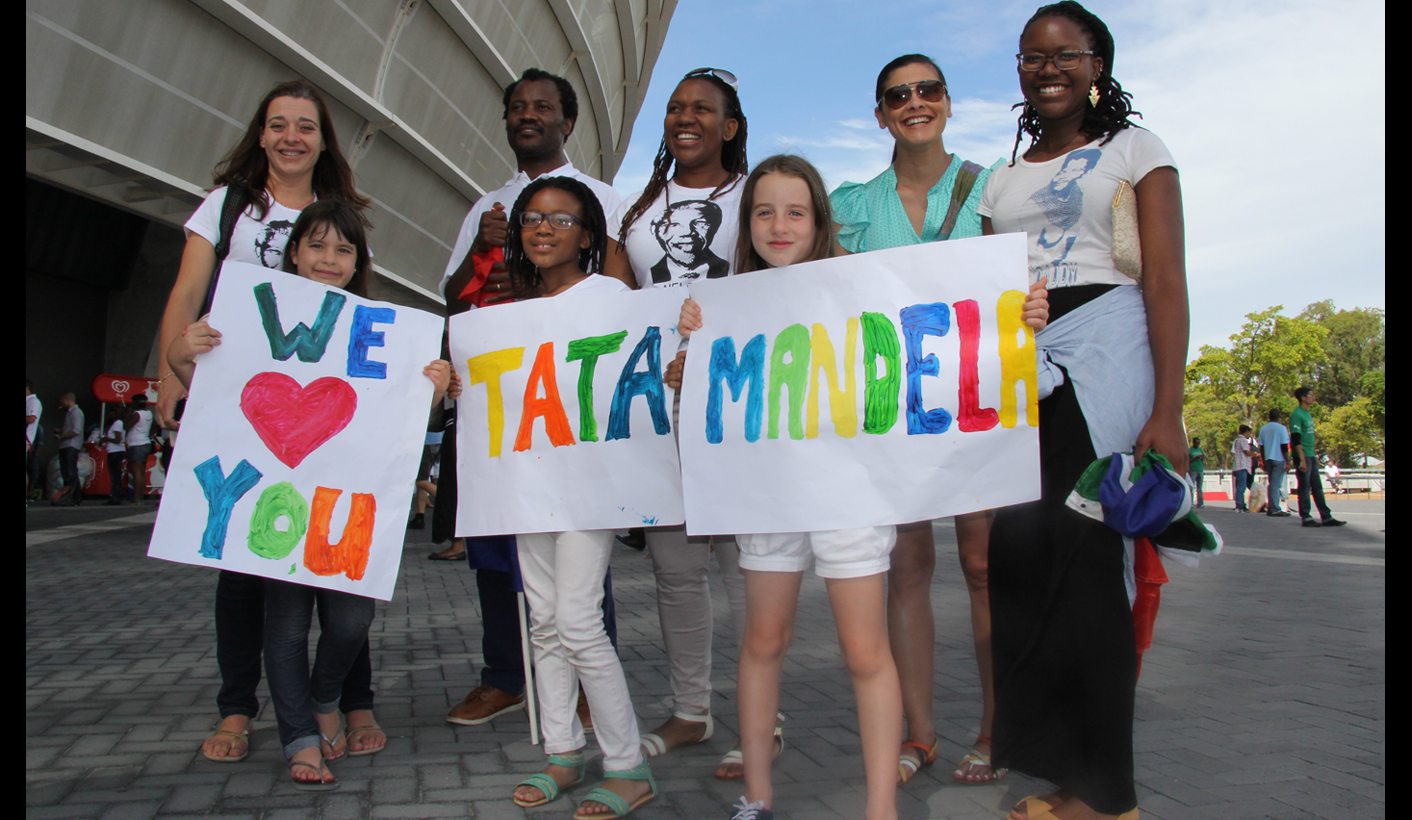 Western Cape ANC leader Marius Fransman called on “all our people” to join a march to the DA-controlled provincial legislature on Thursday. Poor turnout and a refusal by any DA bigwigs to collect a memorandum of demands rendered the march a bit of a damp squib. No faeces was flung – other than verbally. But with the elections a full ten months away, Western Cape opposition politics are looking increasingly like – if you’ll pardon our language – a shit-show. By REBECCA DAVIS.

“We call on all sectors, religious, Khoisan, minstrels, NGOs and CBOs, farm communities and others to come in numbers,” Marius Fransman announced on his Facebook page on Wednesday. “There will be free trains! Also we call on people to be disciplined and dignified. We have picked up that there are agent provocateurs to try and distract. And no throwing of anything allowed!”

Fransman’s reference to “no throwing” was, of course, a reference to the ANC Youth League’s recent dumping of human waste on the steps of the provincial legislature.

“We call on people to come with MASKS on as the Mayor did unacceptable thing by going with MASK into our communities cause she can’t stand the stink,” Fransman continued. Cape Town mayor Patricia de Lille was criticised for having worn protective gear and a facemask during a visit to the Cape Town informal settlements of Barcelona and Kanana on Tuesday.

De Lille’s visit was ostensibly to assist with the clean-up of container toilets, but some residents found her choice to wear a face-mask insulting, given that she was protecting herself from a stink that residents in the informal settlements face daily. The visit was viewed by some as a meaningless PR stunt, but de Lille defended it by saying she was there, with a heavy police presence, to ensure that toilets got cleaned in the face of a labour dispute, which had meant the toilets had been filling up for some time.

When the marchers gathered on Thursday morning, however, it was evident that most of them had neglected to bring either a friend or a mask. With regards to the latter, perhaps someone had informed Fransman that the wearing of masks in protests is illegal under the Gatherings Act, which states that: “No person shall at any gathering or demonstration wear a disguise or mask or any other apparel or item which obscures his facial features and prevents his identification.”

In the end, around a thousand people turned out for the march. Their placards hinted at a very mixed bag of concerns, but primarily: perceived DA racism, service delivery issues, worries about the MyCiti bus lines supplanting the taxi industry, and school closures.

The latter is a long-running issue, stemming from Education MEC Donald Grant’s decision to close 17 Western Cape schools. Sadtu and the affected schools have argued that sufficient consultation did not take place with the relevant communities before the decision was taken.

The Western Cape provincial government has pointed out that thousands of other schools are earmarked for closure in ANC-governed provinces and claims that the issue is being used as another political football.

Before the march set off, Fransman denied to journalists that it was a publicity stunt with an eye on the 2014 elections. “We did it last year and the year before, when there were no elections,” Fransman said.

The end-point of the march, the Western Cape provincial legislature, has become the tinderbox of the province’s fractured politics of late, both in terms of events outside and inside it. Aside from the dumping of waste on its steps, the ANC warned this week that it was reconsidering participating in the Western Cape legislature at all.

This stems ostensibly from an issue in May, when the ANC’s Max Ozinsky said that Helen Suzman “wanted to kill us”. Last Thursday, deputy speaker Piet Pretorius ruled – in response to a request from Premier Helen Zille – that Ozinsky’s claim was unsubstantiated and should be withdrawn. Ozinsky refused to do so and the ANC staged a walkout.

On Wednesday this week, the ANC’s caucus, including Fransman, protested outside the legislature about the DA’s “power abuse”, claiming that the DA was shutting down democratic debate and treating its members unfairly.

In response, DA Western Cape chief whip Alta Rossouw claimed that ANC attendance at important hearings in the legislature was very low and that the ANC members were failing to uphold the duties for which they were paid salaries.

At the march on Thursday, police guarded the entrance to the legislature. ANC Provincial Secretary Songezo Mjongile called for a prayer for the health of Nelson Mandela and then led the crowd in chants of “We want schools! We want homes! We want toilets!”.

Mjongile said that eight South African provinces are free, but the Western Cape is “not yet uhuru”, a suggestion met with cheers by the gathered protestors.

One elderly woman brandished a sign reading: “Zille Klim Af Van Daai Stoel Ek Wil Daar Sit Want Jy Laat My Kak In ‘n Blik”: Zille, climb down from that chair – I want to sit there because you let me shit in a can.

Cosatu provincial secretary Tony Ehrenreich was on hand to deliver his trademark fiery rhetoric. “The mayor comes to our communities and wears a mask,” he said. “Does she want us to wear a mask every day of our lives?”

He compared the impoverished informal settlements with the lavish resources of wealthier Cape Town: “In Constantia, every room has a toilet!”

Fransman took a pot-shot at Zille’s claims that the Western Cape is the best-run province, saying that this fails to take into account apartheid history. During apartheid the old Cape Province had better infrastructure and was not burdened with the Bantustan system, Fransman said, which has given the province an advantage to this day. He hit out at the lack of females in Zille’s cabinet, saying it spoke to a disregard for the capabilities of women and said the same applied to the premier’s attitude to race-based employment equity.

“We must ask: Is Helen Zille racist?” Fransman told the crowd and received answering cries of “She is! She is!”

Fransman condemned the actions of the “young people who throw the kaka kaka”, but said it had served to raise the vital issue of service delivery to the townships. He urged the crowd to make sure that they were registered to vote, so that “the walls of Jericho must come down in May 2014”.

March organisers were initially adamant that only Helen Zille herself would be an acceptable candidate to collect their memorandum. Fransman said they wanted nobody but Zille because the DA had too many “werfbobbejane”, which he subsequently laughingly translated as “tame monkeys”. Given that he immediately followed this with “Only the Madam must come”, his words are – to say the least – open to misinterpretation as a racial epithet.

Fransman will no doubt claim, however, that he was using werfbobbejaan in the same way that Tony Leon did in 1999, when he used it in reference to Louis Luyt’s appointment to the Judicial Services Commission: to refer to a toothless, compliant candidate. Leon said at the time: “If Dr Luyt wishes to be the useful idiot of the ANC, or their werfbobbejaan, then good luck to him.”

Zille did not arrive, however, and Mjongile instructed an increasingly restless crowd to disperse with order. “We will not give our memorandum to the postman,” he said. “We will be back!” The elections may be almost a year away, but it’s clear that the stakes are rising – in an increasingly messy way – every day. DM