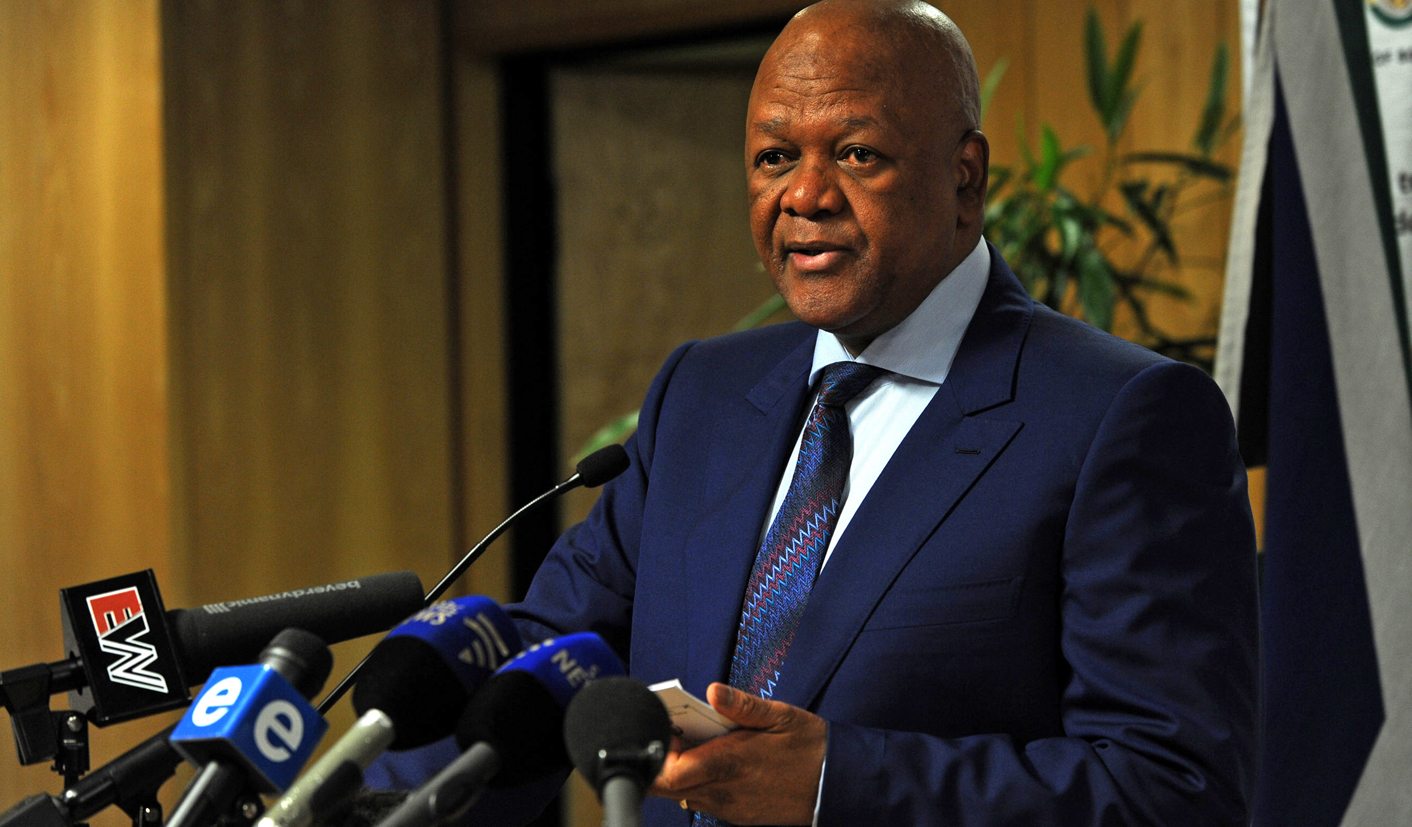 The National Prosecuting Authority has come in for a pasting lately, with a string of controversial outcomes to high-profile cases. But somebody who doesn’t share the public concern about the NPA is Justice Minister Jeff Radebe, if his comments to journalists on Wednesday before his budget vote speech were to be believed. For those hoping for an announcement on the new heads of the NPA and the Special Investing Unit, there was further disappointment. By REBECCA DAVIS.

It is beyond dispute that the NPA hasn’t been having the most glorious run of it in recent weeks, though they suggest that some of the criticism levelled at them has been unwarranted. When ex-Fidentia head J Arthur Brown walked out of the Cape High Court two weeks ago with a R150,000 fine, for instance, many commentators – and the presiding judge, Anton Veldhuizen – slammed the state’s handling of the case. But the Western Cape’s NPA boss Rodney de Kock said this week that the problem lay with the judge, not the prosecution: De Kock called Veldhuizen’s sentence “startlingly and inappropriately lenient” and defended the NPA’s handling of the matter.

While there may be some ambiguity over the Fidentia case and other recent outcomes, like the freeing of Anene Booysen-accused Jonathan Davids, however, there are few grey areas around the matter of axed state prosecutor Glynnis Breytenbach, cleared on all counts in an NPA disciplinary inquiry which wrapped up on Monday. The finding was unambiguous, and made by a presiding officer appointed by the NPA itself. Yet the NPA has indicated that it will seek a judicial review. “In other words, it’s going to court, to ask a judge to overturn a decision made by its very own body,” Stephen Grootes summarised on Wednesday.

That is farcical stuff, and it was understandable that journalists would arrive at Justice Minister Jeff Radebe’s pre-budget vote press briefing with some expectation that he would attempt to allay widespread public doubts about whether the NPA is functioning as it should. There was a further hope: that Radebe might finally announce who will be stepping in take up the posts as head of the SIU and the NPA. In August last year, Radebe said that the SIU would be appointing a new head “imminently”. In the State of the Nation address in February, President Jacob Zuma – who has the final say on the appointments – said that all vacant posts “at the upper echelons of the criminal justice system” would be filled, without giving a timeframe.

Later that month, Radebe told reporters that an appointment to the head of the SIU would be made “by the end of February”. On 5 March, Radebe told Parliament’s Portfolio Committee on Justice that the appointment was “imminent”. Last week, in a written reply to parliament, Zuma said that there was no deadline to make the appointments.

That’s very clearly the case, since it is now almost June and no appointments have been made. Acting head of the NPA Nomgcobo Jiba has been keeping the seat warm for 17 months. Acting SIU head Nomvula Mokhatla has been keeping her company for the same timeframe. Earlier this year there was speculation that the SIU berth would be filled by Advocate Guido Penzhorn, with Pinetown Magistrate Stanley Gumede taking on the NPA role. The DA held a press conference in Cape Town last week, in which leader Helen Zille and Shadow Deputy Justice Minister Debbie Schafer said that if Gumede were to be appointed, they would challenge the matter in court.

A DA investigation into Gumede revealed that he was accused of a number of counts of inappropriate behaviour as a magistrate. Among them: proceeding with a criminal case in the absence of a prosecutor; interfering in the prosecution’s case and dictating to them which witness they should or should not call; being abusive towards prosecutors, court staff and witnesses; and cross-examining witnesses while he was the presiding officer.

“This behaviour is completely unbecoming of a judicial officer, and exhibits a profound ignorance of or disdain for the judicial process,” the DA stated. “If the president does appoint this man as NDPP [National Director of Public Prosecutions], it will be challenged. How he can even be considering it beggars belief.”

Perhaps awareness of the likelihood of the DA mounting a legal challenge to his likely appointment is staying Zuma’s hand, though it’s not like DA disapproval has stopped him doing what he wants in the past. It is clear that the DA doesn’t trust Zuma to fill these two roles with fit persons: indeed, Zille told journalists last week that they believe Zuma makes these kinds of appointments with his eye fixed primarily on his desire to keep himself out of the way of legal scrutiny.

For this reason, the DA’s Dene Smuts has been pushing since 2010 for a constitutional amendment that would give Parliament a greater role in appointing the head of the NPA, and remove complete discretion from the president. They foresee the individual being appointed with parliamentary approval along the lines of positions like the Public Protector and the Auditor-General.

The opposition party is also proposing a Private Member’s Bill that would specify that the head of the SIU could only be appointed by the president “on the advice of the National Assembly”, and that the National Assembly would also have to approve such a person’s removal from the post. The latter provision is presumably designed to protect against a repeat of the events of November 2011, when Adv Willie Hofmeyr was removed from the position by Zuma.

But while the opposition fulminates about potential appointments and plans legislative amendments to ensure a more inclusive process, there is no visible action from the ANC on the matter. Hopes that Radebe would use Wednesday’s budget vote speech to make an announcement on the SIU and NDP heads were quickly quashed at Radebe’s pre-speech media briefing. There would be no such announcement made. During Radebe’s speech to parliament on Wednesday afternoon, he warned against anyone playing guessing games as to who would step into the roles.

“The president is giving due considerations regarding the filing of the positions of the NDPP and the head of the SIU,” Radebe said. “I will discourage against speculations until appointments have been made by the president.” He gave no hint as to when this would take place. Radebe had previously praised the SIU in his speech as one of the agencies making “notable progress in our quest to combat corruption in the public sector”. He made just one specific reference to the NPA, saying that an amount of R3 billion had been allocated to it for the 2013/14 year. (It seems that some of that R3 billion will have to go towards fighting the NPA’s own findings on Breytenbach.)

In the media briefing, Radebe refused to be drawn on any of the recent NPA controversies, and became extremely defensive when pushed. “I am satisfied that they are doing a good job,” Radebe said, and proceeded to cite their high conviction rate and jail overcrowding as the evidence of this. “People don’t volunteer to go to prison,” he said. “It’s because we have got energetic prosecutors at all levels who prosecute without fear, favour or prejudice.” Radebe added that the “few cases you are elevating” – the likes of J Arthur Brown, Tatane, Anene Booysen – are “insignificant compared to others”.

The argument about prison overcrowding representing proof that the justice system is working is rendered bizarre by comments made on the very same day to journalists by Correctional Services Minister Sibusiso Ndebele, before his own budget vote speech. Out of a total prison population of 152,514, Ndebele said, only 107,471 have been sentenced and are serving time.

“On average, 15 to 20% of the awaiting trial detainees are in custody because they cannot afford bail,” Ndebele said. He added that Correctional Services only had beds for 119,000 of the 140,000 prisoners. “It’s a crisis for us,” Ndebele said.

When it was pointed out to Radebe that prison overcrowding might be a result of the long period it took for cases to come to trial, Radebe lashed out. “The nonsense you are talking about is with you, not the system,” he said. You hear that, South Africa? It’s not him, it’s you.

The media attention around the budget vote speech would have been an excellent opportunity for Radebe to display some decisive leadership and help put South Africa’s very real worries about the NPA in particular to bed. Radebe took a leaf from Number One’s book and did nothing of the kind, however. Meanwhile, the long wait for SIU and NPA heads is another day longer. DM

Photo: Justice Minister Jeff Radebe speaks at a briefing in Pretoria on Friday, 21 September 2012 about the probe into the shootings at Lonmin’s Marikana mine. Picture: Werner Beukes/SAPA