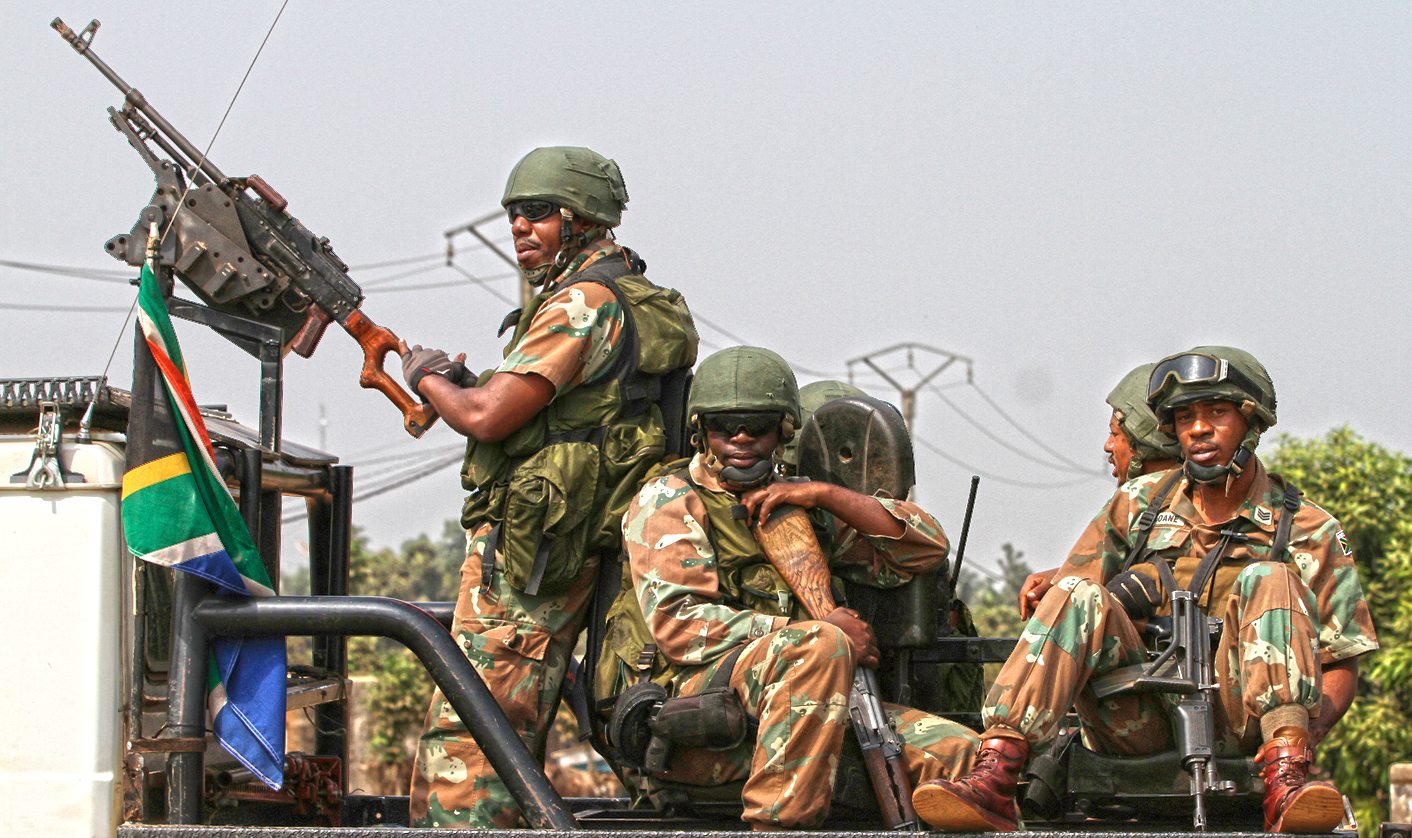 South Africa’s controversial military mission in the Central African Republic has been sized down: of the several hundred South African troops that were stationed there previously, fewer than 20 remain. By KHADIJA PATEL and DE WET POTGIETER.

There were more than 200 soldiers present at the height of the battle for Bangui last month, compared to just 18 at the moment.

General Jean Felix Akanga, head of the regional peacekeeping force Fomac, confirmed to The Wall Street Journal’s Alexis Flynn that just a handful of South African soldiers were still in Bangui. Akanga, a Gabonese national who leads 500 Fomac troops from Chad, Cameroon, Gabon and Congo, said: “There is only a little number [of SA troops in Bangui].”

The South African National Defence Force (SANDF), however, has refused to confirm whether indeed a withdrawal has taken place, reiterating instead that it is still awaiting instructions from government to withdraw or reinforce.

SANDF spokesman Brigadier General Xolani Mabanga said he could not confirm statements from a military official not affiliated to the SANDF.

The Daily Maverick’s own sources have in the meantime confirmed that a withdrawal of South African troops from the Central African Republic is underway. At least 168 South African soldiers were flown back to Pretoria on Friday and a further 100 arrived home later this weekend (this includes the reinforcements sent to Bangui as the fatal firefight kicked off).

Certainly the activity around the Waterkloof Air Force Base this weekend suggested that there was some sort of scale ferrying taking place.

Large, chartered cargo planes took off and came in for landing at all hours of the day and night. Judging by the noise during take-off at two o’ clock on Friday and Saturday morning respectively, the planes must have been part of the Russian-made fleet of Antanov cargo planes usually chartered by the SANDF to ferry its equipment and troops into Africa.

Our sources put the number of South African troops left in Bangui at 18.

What remains to be explained now is the reluctance of the SANDF to confirm that South African troops have been withdrawn from the Central African Republic. Mabanga’s reticence on the matter may point to a genuine ignorance of what is actually going on and a disconnect between him and the senior officials of the defence force, but it is also consistent with the attitude the defence force has assumed since the first reports of South African casualties in Bangui emerged.

Last Thursday, following the handover of the remains of the 13 soldiers killed in combat in Bangui, neither the ministry of defence nor the SANDF took questions from the media, preferring instead to deflect enquiries to a press briefing on Tuesday.

It is unclear whether the 18 troops who remain in Bangui will stay there or also be withdrawn. If indeed these 18 troops remain, it could be reasonably construed that these soldiers form part of the SANDF’s original mission in CAR: Operation Vimbezela, which consisted of between 20-30 South Africans. Soldiers who were deployed as part of this operation were there to provide military training to the CAR army.

The Memorandum of Understanding between South Africa and the Central African Republic that led to the creation of Operation Vimbezela is not invalidated by the rebel takeover. Instead, the new regime inherits the agreements made with its previous incarnation. So if indeed these 18 soldiers do remain in CAR, it could be an attempt by the Zuma administration to indicate a willingness to work with the new regime in Bangui.

CAR’s new leader, Michel Djotodia, does not appear to have much regard for South African military assistance, however.

In an interview with Reuters this weekend, Djotodia said he would seek aid from former colonial power France and the United States to retrain the ill-disciplined army, which was easily overrun by fighters from his Seleka rebel coalition. He also indicated that he would review mining deals that had benefited South Africa – and its ally, China.

The deposed president Francois Bozize had awarded the China National Petroleum Corp (CNPC) rights to explore for oil at Boromata in the country’s northeast, near the border with Chad.

A South African firm, DIG oil, is also prospecting in the southeast of the country, near the town of Carnot.

“I will ask the relevant ministers to see whether things were done badly, to try to sort them out,” Djotodia said, when Reuters quizzed him about resource licences awarded to Chinese and South African firms by Bozize.

But the takeover has been condemned internationally and the US has reiterated that it has not recognised Djotodia as the leader of the country. The African Union has also sought to condemn the coup by suspending CAR from the body and imposing sanctions on Seleka leaders, including the new president.

As the fallout from the loss of South African lives in Bangui continues, defence analysts say the allegations of the initial deployment of South African troops to CAR was not problematic. “The mistake was sending a further 200 troops this year.”

Meanwhile, South African troops have already been transferred to a newly authorised United Nations peacekeeping brigade in the restive eastern region of the Democratic Republic of Congo. M23 rebels have warned that the United Nations have “chosen to make war” through the brigade.

“This is the war option that the United Nations is exercising,” the political leader and spokesperson of the M23 rebel movement, Bertrand Bisimwa, is reported to have said.

And the M23 will certainly be taking note of reports of an under-equipped South African force in CAR.

But even as the resources and readiness of the South African National Defence Force for more combat are questioned, soldiers returning from Bangui, speaking in their personal capacities, quite apart from the cagey statements of SANDF officials, insist that South African troops actually did well in Bangui.

As one soldier freshly returned from Bangui noted to his friends on Facebook this weekend, “The men who were with me, salute! I know you did what is expected from a soldier. Nothing less, nothing more.”  DM