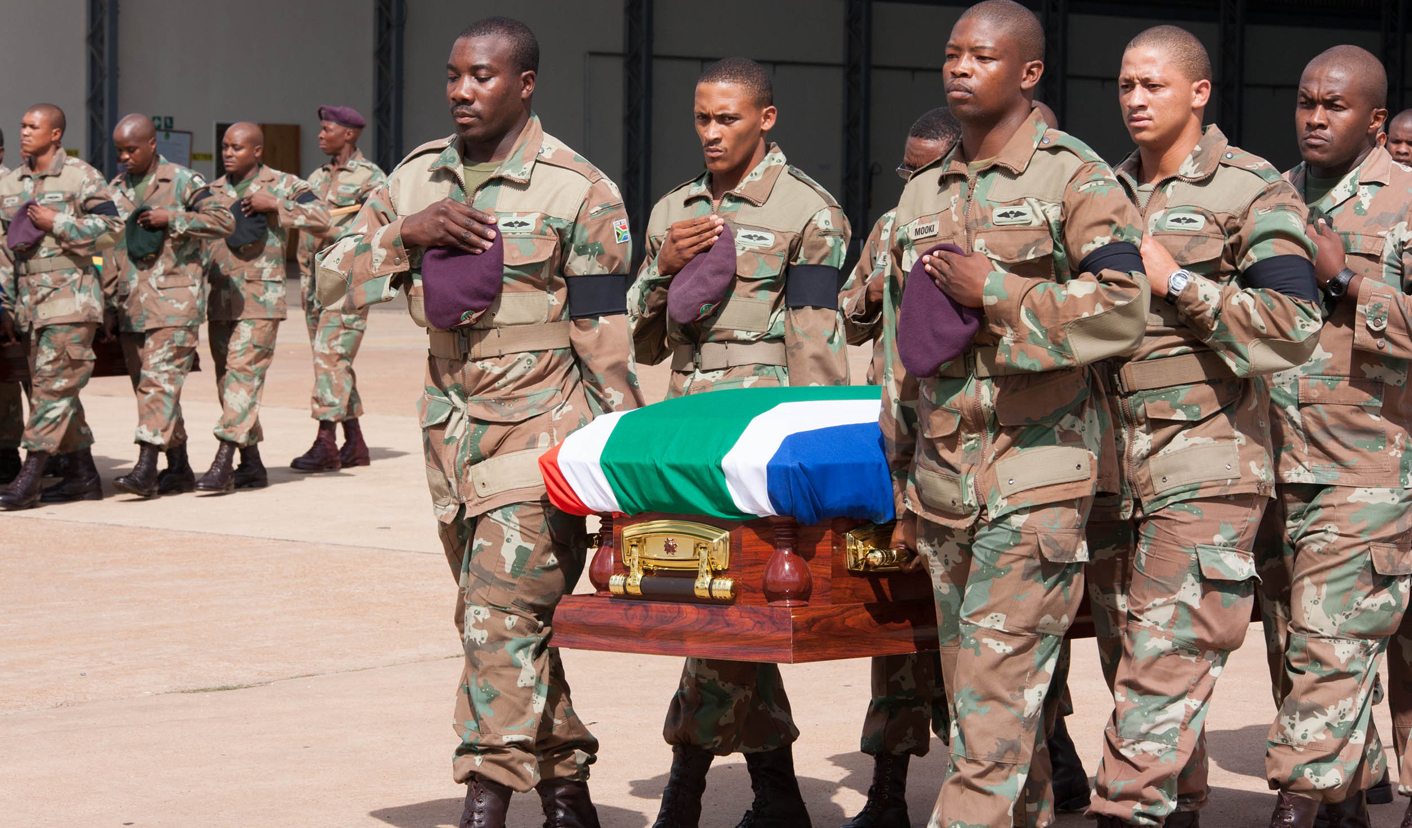 Minister of Defence and Military Veterans Nosiviwe Mapisa-Nqakula, her deputy, Thabang Makwetla, and General Solly Shoke stood with family members of the deceased during a ceremonial handover of the remains of the fallen soldiers from the South African National Defence Force (SANDF) to their families on Thursday. The remembrance of these men, however, is being increasingly politicised. By KHADIJA PATEL.

“If this was America they would be treated as heroes,” one Department of Defence official remarked after the coffins carrying the bodies of the 13 South Africans killed in the Central African Republic last weekend were handed over to families of the deceased at the Waterkloof Air Base in Pretoria on Thursday.

“Instead they are being treated as victims,” he added.

After following the fortunes of South African troops in the CAR for the last week, the Daily Maverick has striven to piece together what actually happened in Bangui that left 13 South Africans dead. In the morass of uncertainty over the motivations for the deployment of our troops to the CAR, the fact that 13 South Africans were killed is all too easily overlooked.

The sight of 13 coffins draped in the national flag in a hangar at the Waterkloof air base in Pretoria was a sobering reminder.

And despite the questions that must still be asked about the continued presence of our troops in the CAR, the ceremony on Thursday was a stark reminder of how many questions about the deaths of these men can never be fully answered.

“Their last moments will never be known because they died fighting,” Mapisa-Nqakula lamented to the bereaved families.

Yet, according to the minister, every soldier wants to experience active combat.

A wounded soldier who is being treated at 1 Military Hospital echoed her sentiments.

“Ah, it’s our job,” said Warrant Officer Zwelithini Nkosi, who was wounded in last week’s battle for Bangui, during a visit by deputy minister Makwetla. He was shot in the leg but he showed no sign of pain, or discomfort as the deputy minister visited his ward. He smiled meekly as the marauding group of journalists accompanying the minister jostled for space inside the ward.

When Makwetla spoke to Nkosi, he congratulated him on his bravery, indicating as well that the wounded soldiers would be rewarded with medals for their bravery. And yet the talk of medals, honours and rank sounds hollow against the bitter reality of death.

Thirteen coffins were carried out of the hangar at Waterkloof Air Base. Thirteen families sat listening to the minister explain to them that their loss was not in vain.

Mapisa-Nqakula spoke eloquently about the bravery of the troops who had fought last week’s battle in Bangui.

“They were all very young, but they were lions. They fought with honour,” she said.

“We as a country fully take responsibility for the death of your children. But we don’t regret sending them,” Mapisa-Nqakula said. “Painful as it may be, know that your children died fighting. I say this in all sincerity, without any arrogance.”

She stressed that the losses incurred by the SANDF would not be a deterrent to future deployments.

“This was not the first deployment and it won’t be the last.”

“What is important now is to remember what your children stood for and that they died as heroes,” she said.

Mapisa-Nqakula dismissed reports the soldiers were in the CAR defending the business interests of the political elite.

On Thursday the Mail & Guardian questioned whether South African troops had been deployed to protect the business interests of the ANC.

“They fought protecting South African interests. They were not protecting any business. There was a bilateral agreement signed that they were fulfilling,” the minister insisted.

Significantly, Mapisa-Nqakula told the bereaved families that she and the deputy minister had stayed awake until 1:00 last Saturday to keep up to date with the latest from Bangui. And yet the Department of Defence and the SANDF only responded to media enquiries about South African casualties on Sunday, without confirming any details. In its reluctance to reveal more the South African military apparatus created the conditions for speculation.

And those conditions continue to hold. Neither the minister nor the deputy minister took questions from the media on Thursday, promising instead to speak to the media at the memorial service for the fallen soldiers next Tuesday. Until then, the questions remain and the speculation will only intensify.

On Thursday evening the Daily Maverick learned that at least 100 soldiers have already returned home from the CAR and that the SANDF will be withdrawing much of the contingent in the CAR, leaving only a small residue of the original deployment there to spare South Africa’s rulers the embarrassment of appearing to be running away.

These soldiers are heroes. But they are victims too. They are victims of the government’s dire lack of accountability that is currently being paraded as bravado and they are victims of the mission that is as yet unclear, a mission that increasingly appears to have been in the interests only of a few powerful individuals. As a country South Africa had no interest in, and did not stand to benefit from, the presence of its troops the CAR. Perhaps, in the coming days, the government will finally learn that people of South Africa are far more accepting of the truth than they are of lies. DM