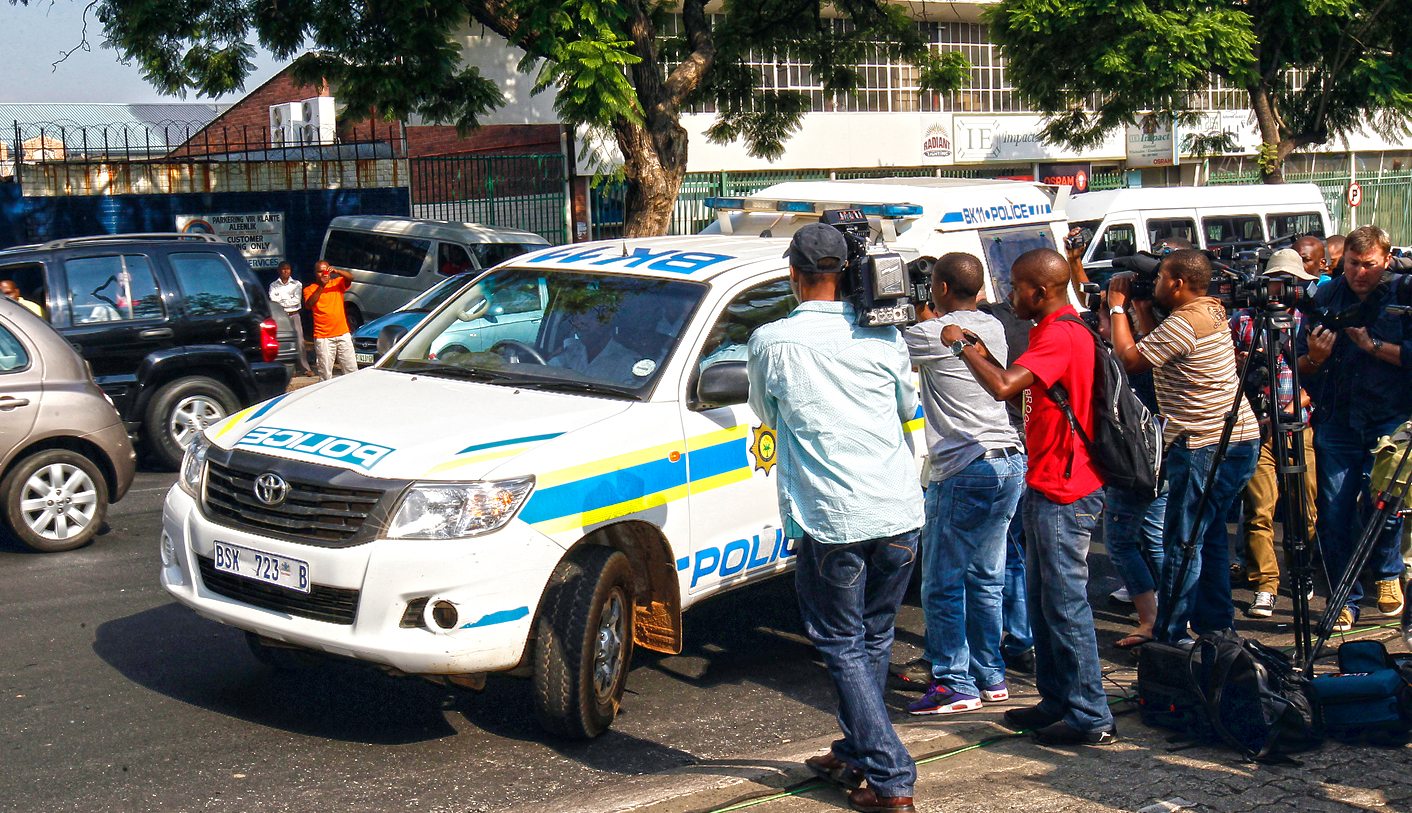 There has been no pause in the media furore surrounding the arrest of Oscar Pistorius on a charge of murdering his girlfriend, Reeva Steenkamp. And there have been leaks, speculation and rumours aplenty to satiate the seemingly endless public appetite for news. By KHADIJA PATEL.

The competition for the most-talked about story by a South African Sunday paper must go to this weekend’s City Press. The Media24 title, edited by Ferial Haffajee, led with a spectacular front-page story revealing titillating details of the police case against Oscar Pistorius.

“City Press spoke to three sources close to the high-profile investigation, which has gripped the world’s imagination,” the story by Adriaan Basson and Jacques Steenkamp revealed. “They all ruled out the possibility that Pistorius could have mistaken Steenkamp for an intruder.”

Inside the paper, City Press compiled a possible sequence of events that led to Reeva Steenkamp’s murder. Significantly, City Press and a number of other publications are reporting that police were first called to the Silver Woods estate in Pretoria East by neighbours complaining about the noise from the Pistorius home. What happened between then and 3:20 AM last Thursday morning, when neighbours called the police once more after hearing gunshots, has been filled in by City Press quoting its “police sources”:

And then, at the centre of it all, City Press reveals that a bloodied cricket bat is central to the police investigation against Pistorius. City Press says police are investigating the possibility that Steenkamp was viciously assaulted with the bat, leading to a skull fracture. Another two possibilities being investigated are that Steenkamp may have used the bat in self-defence, or that Pistorius used it to break down the bathroom door.

But even as the country reels from these revelations, Sapa has retorted with a response from the SA police, who deny leaking details of the case against Pistorius to the media.

“Currently we haven’t issued a statement or spoken to anyone.”

So, too, National Prosecuting Authority spokesman Medupe Simasiku (through Sapa) called for the source of the reports to the media to be identified.

“[The newspaper] must confirm where they got the information.”

Simasiku said that the NPA had been handed an incomplete police docket on the case on Friday, as police said the investigation was still ongoing. Simasiku says the NPA have themselves not been privy to the details published in the Sunday papers. The police, however, have declined to comment on the veracity of the City Press leaks.

Still, the level of detail revealed through the police sources left some South Africans questioning the ethics of the reporting. “Can it really be acceptable in a society governed by laws to publish in graphic detail the case against him?” Professor Steven Friedman, director of the Centre for the Study of Democracy at the University of Johannesburg, asked on Facebook. “Is it old-fashioned to insist that charges against an accused should be tested in court and that we should wait for the court proceedings to find out what is alleged and what the accused’s reply is?”

William Bird, Director of Media Monitoring Africa, believes this kind of caution against trying Pistorius in the media before he’s tried in court is unusual. He points out that the alleged rapists and murderers of Anene Booysens were subject to the ire of an entire nation without much fuss over the legal considerations of their innocence until they were proven guilty.

Bird believes the comparison between the Steenkamp and Booysens murders is significant, as it clarifies the extent to which the global media have been captivated. “Compare it to the Anene Booysens case,” he says. “That was horrible, and everyone was appalled and shocked by what had happened to her. But she was a poor victim. She had no personality beyond her rape and murder.”

The Reeva Steenkamp murder is different.

“This is a classic fall of a hero,” Bird says. “You couldn’t ask for a better news story – attractive, famous white people involved in a heinous, terrible crime.”

Of course, there has also been some controversy around the representation of Steenkamp’s identity in the media – particularly the emphasis on her attractiveness and budding celebrity status. British tabloid The Sun has come under heated criticism for its front page last Friday, which carried a large picture of Steenkamp in a bikini.

Writing in The Guardian, however, Roy Greenslade says: “What do people expect of the Sun? Sure, its front page is tasteless. Yes, it is also sexist. But the paper is like that every day in every way.”

And yet as criticism against The Sun rings out in Britain, back home the Sunday World and Rapport also carried front-page pictures of Steenkamp posing in a bikini. So, too, did other British and American tabloids.

Another British paper, The Independent, scrutinises the decision of the producers of the reality television show Tropika Island to go ahead with airing the programme just two days after Steenkamp, as one of the contestants, had died.

The Independent’s Daniel Howden writes, “Samantha Moon, executive producer of the show and owner of the Johannesburg production company, Stimulii, said her firm was ‘in no way seeking to exploit’ the model’s murder and that airing the programme was the best ‘tribute’ to Ms Steenkamp. At the same time, however, Mrs Moon was charging news outlets $3,000 each to broadcast a short clip from the television show – with at least a dozen networks buying rights.”

Many stories, both locally and internationally, are now trying to reconcile the public personality of Pistorius with the possibility that he could have murdered his girlfriend.

The Sunday Independent reprinted a story from the British tabloid the Daily Mail, which detailed a journalist’s recollection of a day he spent with Pistorius shortly before the London Olympics last year. He recalls a polite, humble man who never failed to invoke God’s blessings. But he recalled as well some signs of disarray in Pistorius’ life. He was eating inadequately, drinking instead copious amounts of coffee and popping caffeine pills to keep going.

Pistorius is continuing to protest his innocence, and a fair representation of media are airing his voice as well. The athlete’s 59-year-old father Henke maintains that his son meant to shoot an intruder, and blames crime in South Africa. “When you wake up in the middle of the night – and crime is so endemic in South Africa ­– what do you do if somebody is in the house? Do you think it’s one of your family? Of course you don’t,” he told The Telegraph. “When you are a sportsman, you act even more on instinct… It’s instinct – things happen and that’s what you do.”

Yet another British tabloid, The Mirror, spoke to Justin Divaris, who introduced the couple and is said to be the best friend of Pistorius. He said Pistorius called him moments after Steenkamp was shot and later sobbed: “My baba, I’ve killed my baba. God take me away.”

Rapport noted that Springbok Francois Hougaard, who is also a neighbour of Pistorius, declined to comment on the case, stating he was not involved. Rumours have linked Hougaard romantically to Steenkamp, but his lawyers say he is mourning the death of a friend.

The Afrikaans tabloid Sondag claimed Pistorius’ cell at the Brooklyn police station was like a hotel room, inferring that he was receiving special treatment from the police. They also offered some insight into the Olympic hero’s state of mind. “Brigadier Andre Wieste, station commander at Brooklyn, said, ‘A person won’t say he’s a famous athlete. He looks like a boy,” Yolanda Barnaard wrote.

Throughout the country, the attempt to understand who Oscar Pistorius really is continues through the media.

The Saturday Star quoted former Kaizer Chiefs footballer Mark Bachelor, who was involved in a fight with Pistorius last year, saying Pistorius carried a gun everywhere and that he had seen Pistorius being “controlling towards women”. And in the same vein, the Sunday Sun says, “In 2011 he lost his temper during a BBC interview and walked out of the studio.”

The picture of Pistorius emerging is certainly a troubling one. But it is also at odds with the clean-cut poster boy South Africans, and the rest of the world, knew and loved. And certainly losing one’s temper in a studio is not the same as murder.

Moreover, it is disturbing that these so-called ‘warning signs’ are emerging only after the fact.

“If this becomes a case of gender-based violence, why did the media not listen to the people saying things before this? Why were the signs not picked up?” Bird asks. “Why were the guns not taken away?”

Photo: Members of the media cover the arrival of South African ‘Blade Runner’ Oscar Pistorius ahead of his court appearance in Pretoria February 15, 2013. REUTERS/Siphiwe Sibeko