Russian forces in Ukraine reveal their true faces of ho...

The last few days were very hard for my country as Russia started posting the most horrific recordings of tortures and mass killings online to demoralise and scare our nation into submission.

As an official representative as Ambassador of Ukraine in South Africa, and a career diplomat of 20 years, I know how to always be calm and composed, even in the most stressful and difficult situations. It is a big and very important part of my job, a job that I love, a job that is more my life’s calling than just a career.

I find it very satisfying to have proper education and training to stand tall with my country and to maintain self-control throughout the toughest of times. But I’m not going to lie. For the last five months, it has been a real test of my skills as I find it difficult to compose my thoughts when I see Russian soldiers killing and raping children, women and the elderly in my country, bombing our cities, torturing and mass-killing our citizens – all proven and documented.

Please be advised that I will be talking about Russia’s latest war crimes in this column, so this is your fair warning – if you aren’t ready for such a discussion, please stop reading now.

The last few days were very hard for my country as Russia took a final step to complete its transformation into a 100% terrorist organisation.

Russia is losing on the battlefield – they’ve abandoned most of their initial “goals” in Ukraine and are now panicking that they are losing even the small territory they’ve managed to occupy. Over the last few months, our soldiers have successfully destroyed 50 Russian military warehouses with missiles, as well as some of their military dislocation places in occupied cities.

We’ve destroyed Russian logistics chains, which  deprived them of their ability to conduct active combat operations. The only way Russia knows how to carry out successful combat is to literally “pour” a huge, inhumane amount of missiles on a city, completely destroy it by burning it to the ground, and then move in and claim that they’ve “won the battle”. So our military has put an end to this barbaric “tactic” for now.

Furthermore, last week our armed forces destroyed the key bridge to Russian-held Kherson. We’ve struck the strategic bridge that is absolutely essential for Russia to keep their supply chain going to the south of Ukraine.

Russia keeps saying that they are fine, but we’ve now witnessed all the officials from Vladimir Putin’s “Yedinaya Russia” party, terrified and fleeing the region, claiming that they’ve “ended their humanitarian mission”. We are used to them running scared when they are losing.

This doesn’t mean that we’ve won, there are literally 40 million of us to 160 million of them, with our army ranking 22nd in the world and theirs second. But they definitely don’t have anything to brag about.

Furthermore, our civilians are expressing hate and disgust towards the Russian murderers, and they see no change in our behaviour. We aren’t scared and we are not backing down. That is why Russia has decided it’s time to go by the terrorist manual and start filming tortures and mass killings and posting them online, to demoralise and scare our nation into submission.

A few days ago, Russians began releasing the footage that I am urging you to avoid if you come across it online. You won’t be able to unsee it.  They uploaded a recording of the Russians severely beating one of our prisoners of war (POW), then holding him down and castrating him with a box-cutter knife.

Another recording they’ve uploaded shows them executing a captured soldier by shooting him in the head and dragging his body into a ditch. All were uploaded online, in the best traditions of al-Qaeda or Isis.

“But the violence of the latest case, which has been widely shared on social media, is beyond imagination. The video shows the inhumane treatment of a soldier wearing the uniform of the Ukrainian Armed Forces by the occupiers. Even prosecutors and investigators experienced in investigating violent killings and torture have been shaken by it.”

And in the same period of time, we’ve had to deal with another terrorist-like attack from Russia: they’ve mass-killed our POWs captured after the fall of Mariupol. The UN, Turkey, as well as Russia, guaranteed all of them life if they surrendered. So they did. We believe – we know – that Russians were covering up their atrocities and that is why they killed them.

Footage shot after Russians blew up the building where they held our POWs in captivity, showed charred, burnt bodies and body parts. They literally burned Ukrainians alive. We are now certain of at least 40 deaths of our soldiers, and 130 are severely burned and injured. I won’t ever get tired of repeating: the world is watching the genocide of Ukrainians by Russia.

In response to the whole world being shocked by these barbarous acts committed by Russians, the Embassy of Russia in the UK, for example, tweeted on their official account that they are fine with all of it. And that they would prefer Ukrainian soldiers to be hanged and not shot, and humiliated before they are killed. 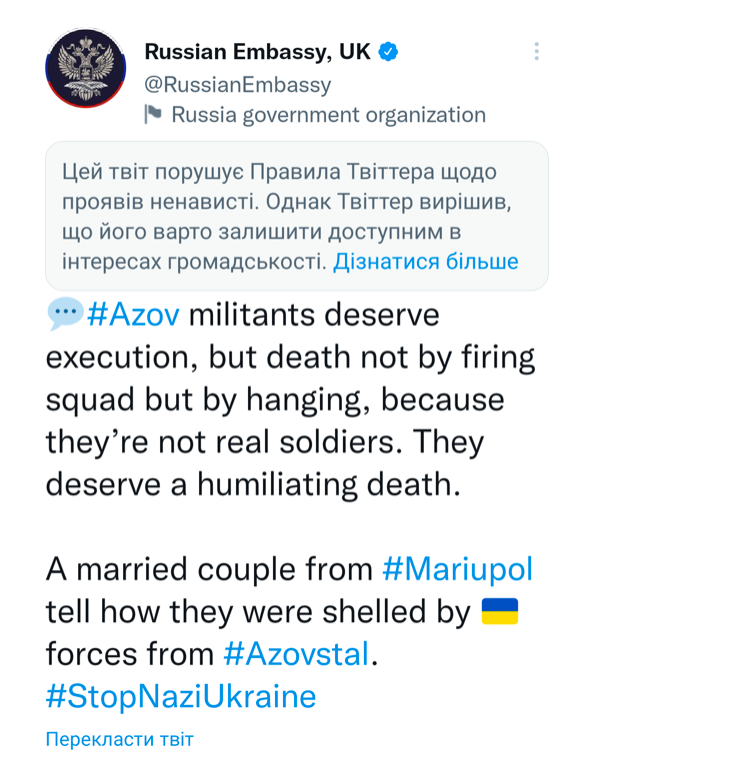 And then they shared a link to another Russian propaganda movie. This is Hitler’s sort of diplomacy, no less. I’m waiting for the world to finally realise #russiaisaterroriststate.

Next time I plan to talk about the OSCE’s experts report. That report is already out and available for anyone to read. It documents numerous violations of international humanitarian and human rights law, war crimes, crimes against humanity, and other atrocities committed by the Russian Federation and its armed forces during the ongoing war of aggression against Ukraine. DM