SA’s formal employment growth set to broaden the tax base

More than 400,000 new formal sector jobs were created in South Africa during the first quarter of the year, signalling a continuation of economic recovery and growth.

According to the latest Quarterly Labour Force Survey released by Statistics South Africa (Stats SA), unemployment declined marginally to 34.5% in the first quarter of the year, although the accuracy of this figure has been questioned, mainly due to an unrealistically low estimate of informal sector employment in the country.

One of the most encouraging aspects of the latest employment data is the reversal of a lengthy downward trend in manufacturing sector jobs. 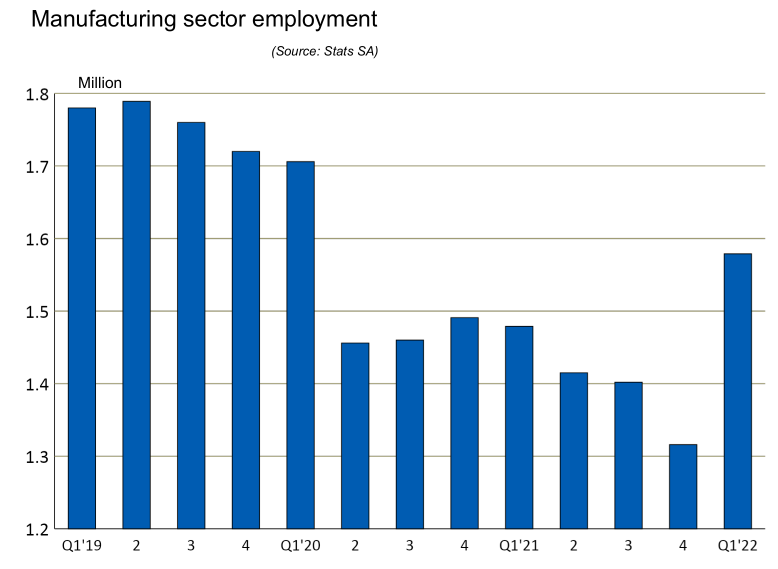 During the first quarter of 2022, a total of 263,000 new jobs were created in South Africa’s factories, signalling the ability of the country to respond positively to the global supply chain crunch, which has temporarily lowered the supply of several imported goods categories.

The recovery of job creation in manufacturing has taken place against the background of a substantial degree of underutilisation of production capacity.

Following the economic downturn induced by the Covid pandemic, capacity utilisation in the manufacturing sectors had predictably declined.

After a decade of hovering around a level of about 82%, this key indicator of the state of manufacturing activity recovered to almost 79% in November last year, but dipped again slightly to 77.8% during the first quarter of 2022.

Ample underutilised capacity still exists, and domestic manufacturers are clearly taking advantage of higher demand – both for final consumption and intermediate usage in other industries.

The advantage of this scenario is that any future increase in capacity utilisation will, in many cases, automatically translate into lower overhead costs per unit, thereby softening inflationary pressures.

Hopefully, the SA Reserve Bank, which has become increasingly hawkish in its monetary policy stance, will not overreact to the higher global inflationary environment, as the spike in the oil price is the overriding cause of higher inflation and raising domestic interest rates will not solve this problem.

It is evident from the latest employment data that high-level skills are being sought after, especially professionals, technicians, salespersons, plant and machine operators, crafts and related tradespeople and administrative personnel. In combination, these occupations were responsible for 663,000 new jobs during the first quarter, in contrast to a loss of 279,000 jobs for elementary occupations.

An interesting trend in the country’s labour market is the growth in significance of the Western Cape, which is on the verge of overtaking KwaZulu-Natal as the province with the second-highest level of employment. 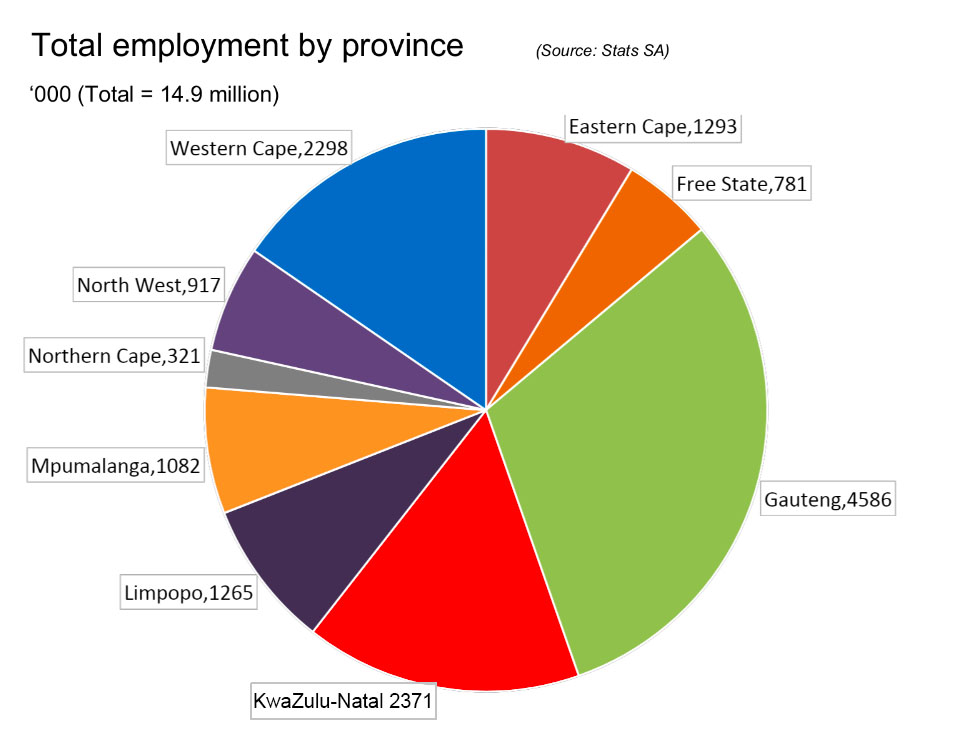 According to research published by BrandMapp, the number of individual taxpayers in South Africa increased by 500,000 in 2021 to reach a level of 7.4 million.

It is particularly encouraging that the number of individuals earning more than R350,000 per annum increased by 18.5%, as they represent the mainstay of total tax revenues in the country.

National Treasury will no doubt be delighted with the latest formal official employment data, as growth in formal sector jobs translates into a significant broadening of the country’s taxation base.

A rough calculation, based on the average formal sector salary in South Africa, of prevailing income tax rates and the average ratio of indirect taxes to income, points to additional taxation revenue of R2.7-billion per month as a result of the latest increase in employment.

Combined with record exports for several key commodities and the prospects for further growth in company profits during the current fiscal year, it is really no surprise that government recently decided to extend the cut in the fuel levy.

It is clearly affordable, and consideration should be given to a permanent lowering of the tax component of fuel prices, which would certainly assist efforts to subdue inflation. BM/DM