South Africa’s motor trade powers ahead on the road t...

It did not take long for South Africa’s motor trade to stage a remarkable recovery from the disastrous first year of Covid-induced lockdown regulations.

The first quarter of 2022 produced splendid results for South Africa’s burgeoning vehicle sector, with total motor sales having increased by 21% over the first quarter of 2019 (pre-Covid). Compared with the worst pandemic quarter (between April and June 2020), total motor trade sales were 130% higher between January and March 2022 (at current prices).

At more than R16-billion, new vehicle sales in March were the highest ever, while used car sales recorded their second-highest level yet. All the other components of motor trade sales also experienced a stunning first quarter of the year, with fuel sales rather predictably coming out on top – an increase of 39% over the first quarter of 2021. Sales emanating from workshop income, accessories and convenience store sales recorded quarter-on-quarter increases of between 19% and 25%. 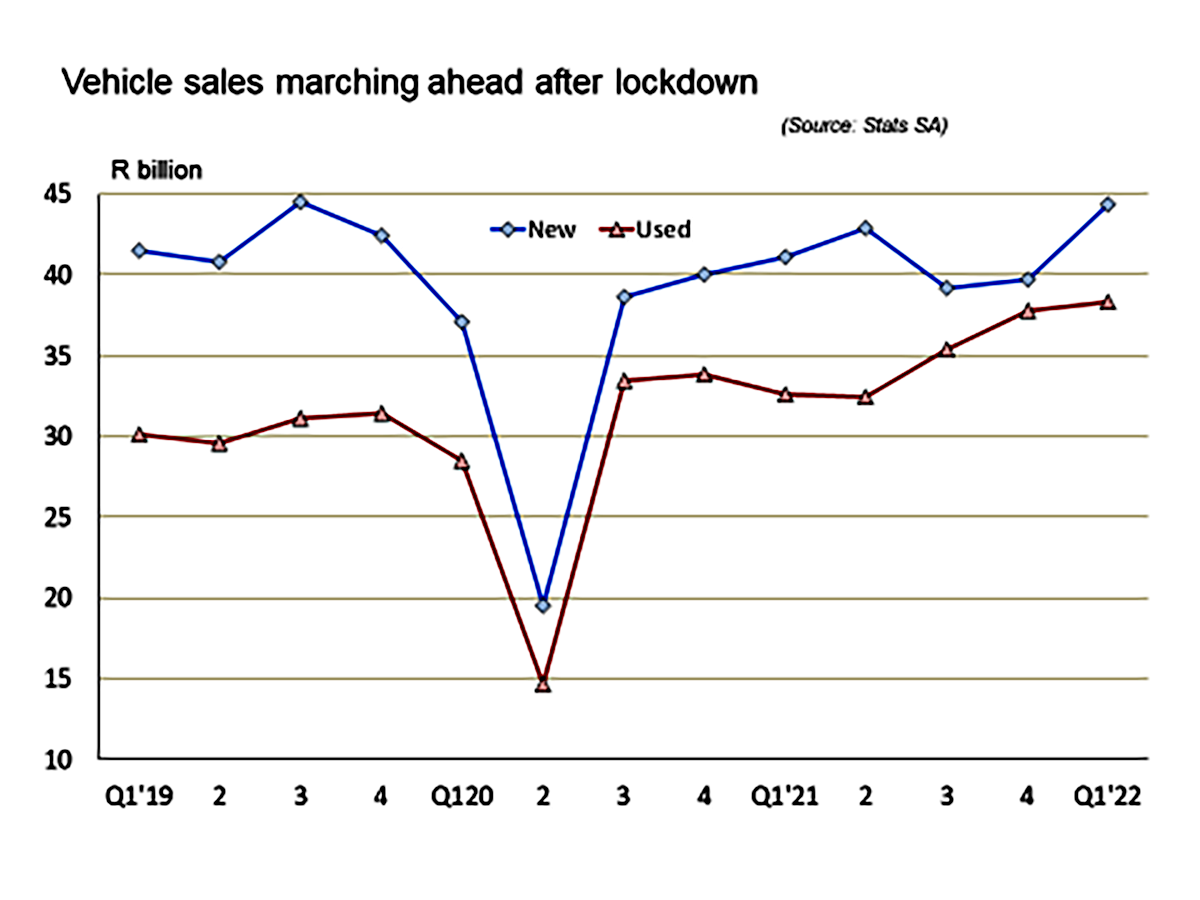 According to the National Association of Automobile Manufacturers of South Africa (Naamsa), the new vehicle market continued its road to recovery during the month of April 2022. Sales in the volume passenger car segment performed well, assisted mainly by ongoing strong purchases from vehicle rental companies. The latter has been necessitated by the ongoing recovery of commercial aviation activity and tourism – a clear sign that the sectors worst affected by the pandemic are coming to the party again.

A total of 67,895 new vehicles were sold in April 2022, of which 45% were for the export market. This is an increase of 9.3%, from the figure for April 2021. Export sales were even more buoyant in April, recording an increase of 16% over the figure for April 2021. It is particularly encouraging that the sterling performance of SA’s motor trade was achieved despite the flooding disaster in KwaZulu-Natal, which caused supply chain disruptions in port, rail and road traffic as well as the temporary closure of Toyota South Africa Motors.

The domestic automotive industry is nevertheless likely to continue a stop-start progression in 2022, due to a number of daunting challenges facing the sector at large. These include the return to restrictive monetary policy by the SA Reserve Bank (via higher interest rates), the strict lockdown regulations in China, shortages of semi-conductors, insufficient inventories and global supply-chain disruptions in general.

For now, the industry has reason to cheer, with both the domestic and export demand for new vehicles faring well. In the first quarter of 2022, net exports of vehicles and spares amounted to almost R14-billion, representing 22.4% of South Africa’s cumulative trade surplus. 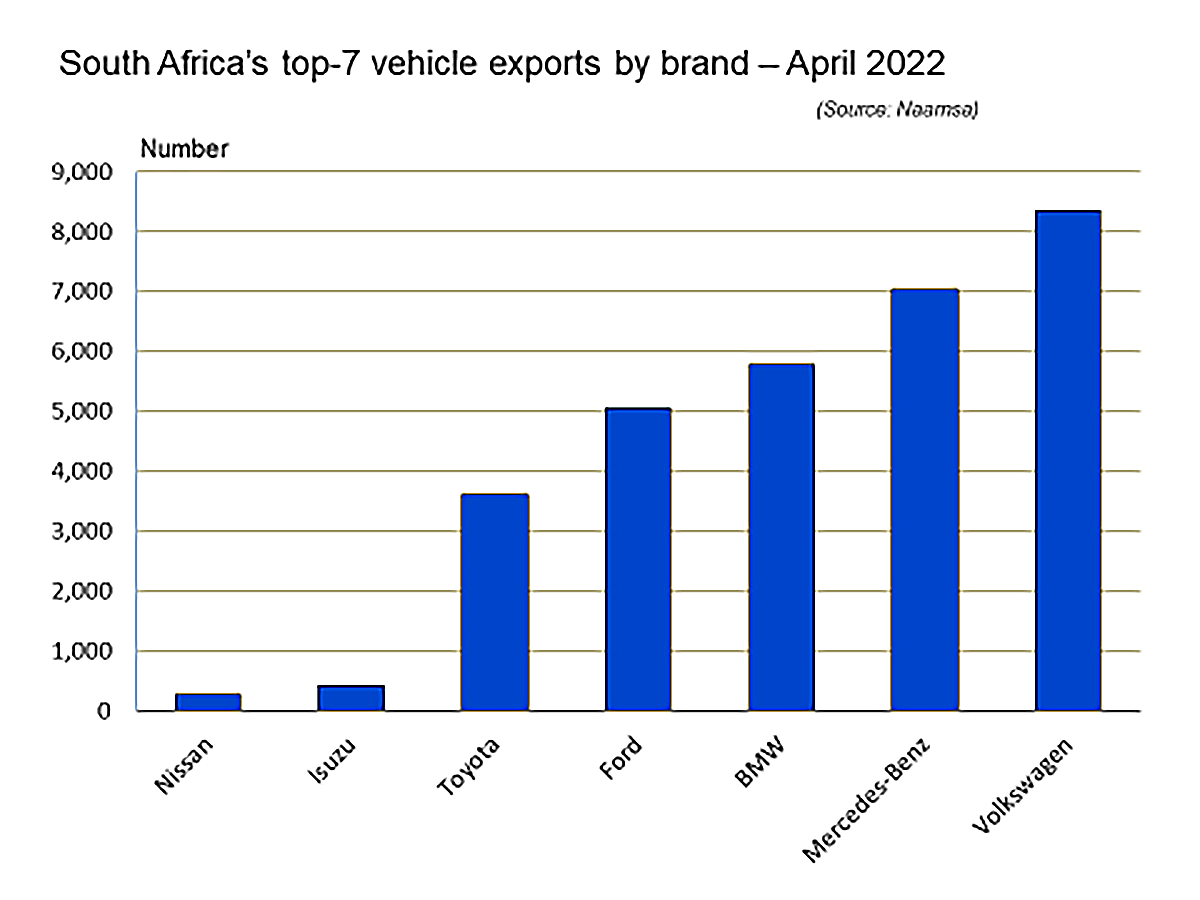 Until the turn of the century, South Africa was the undisputed champion of motor trade (including manufacturing) on the African continent, but the country is now being challenged by two north African countries, namely Morocco and Egypt. According to the Africa Automotive Data Network, Morocco and Egypt accounted for 48.5% of vehicle sales in Africa in 2021, but South Africa remains the single largest market at 44.1% (500,000 vehicles).

Two of the main reasons for Morocco’s success story are its proximity to European markets and the free trade agreements it has signed with Europe, the US, Turkey and the United Arab Emirates.

Multinational vehicle manufacturers are also setting up production plants in Angola, Ethiopia, Ghana, Kenya, Namibia, Nigeria and Rwanda, although several of these are only assembly plants rather than fully fledged production facilities.

Although South Africa’s comparative disadvantage regarding its distance from the lucrative European markets is immutable, it can learn from Morocco’s ability to negotiate favourable trade deals, especially with the world’s largest economy. The long-standing ideological apprehension shown towards the US by the South African government is not doing the economy any favours.

Another policy recommendation is to substantially improve the infrastructure at Durban harbour and privatise as many of its functions as possible. DM/BM