The pros and cons of whataboutism

Whataboutism carries a heavy cloak. When deployed correctly, it can provide context, perspective and reveal double standards and duplicity. Sure, there is often malice with an attendant drawing on the sliding scale of justice when, in fact, justice is indivisible and not the property of one group to hand out to only their kith and kin.

Social media, eh. It has made some of us cautious about saying anything, and emboldened others. There are people on social media who will start a war over the use of the word ‘porridge’. You can’t complain about a sore toe because you have to check your “foot privilege”. I went off Facebook a few years ago, but was asked to come back on specifically for a few months (the month after I went off Twitter).

I missed Twitter because I used it as a news aggregator of sorts. On Twitter you can keep in touch with the work of people like Branko Milanović, who I think is the best read and most inspired economist in the world. But I had no sooner been back on Facebook when I stepped on to that landmine of “whataboutism”.

Shocked by the wanton invasion of Ukraine on 24 February, I noticed a righteous outpouring of solidarity with the people of that beleaguered country. But I made the fatal error of saying that I wished there was similar solidarity with people from Myanmar across to western Asia. A “friend” dismissed this as “whataboutism”. I did not get involved in the discussion, but spent the past month ruminating.

Another friend said they were saddened, as well they should be, by the first war in Europe since the end of World War 2. I mentioned that she had missed the killing of people, many of my friends and their families in Novi Sad, Belgrade and Sarajevo. She was graceful and acknowledged oversight of the wars that wrecked Yugoslavia.

At the risk of raising the ire of very many people, I want to make the claim that not all “whataboutism” is a bad thing; it depends on who raises it, who the audience is and, most importantly, what the relevance is.

Consider an example. One of my least favourite politicians – if you removed all dictators, despots, mass murderers and crackpots – once criticised the South African government for being critical of Israel while having cordial relations with a central African regime that was corrupt. That type of whataboutism, it would appear, is acceptable.

Hundreds of people, black people, are killed across South Africa every weekend (and that is presumably okay), but one white farmer is killed, and there is a mass outcry. The context is simply ripped from the story and emotions are whipped up. Whereas all killings are cause for outcry, it seems that some lives are worth more tears than others. You can cry for Ukraine, as well we all should, but not for Yemen, Myanmar, Afghanistan, Syria, Libya, Tigray or Palestine.

Just by the way, whenever I meet people who say that apartheid is “over” and “past”, I always ask why they always tell us about the suffering of Afrikaners in the British concentration camps and the hardships of the Great Trek.

Whataboutism carries a heavy cloak. When deployed correctly, it can provide context, perspective and reveal double standards and duplicity. Sure, there is often malice with an attendant drawing on the sliding scale of justice when, in fact, justice is indivisible and not the property of one group to hand out to only their kith and kin.

Speaking of double standards, another economist who I admire, one of those people from the Global South who has become a darling of the North, made an exceptional speech opposing his former home, India, acquiring nuclear weapons. Abstinence in making and deploying nuclear weapons strengthens rather than weakens India’s voice, Amartya Sen told people in Cambridge in August 2000.

Since the first Pokhran-II tests in 1998, India’s nuclear arms have expanded significantly. Two decades after the first tests, Rammanohar Reddy of The India Forum in Hyderabad described the media and its role in India’s nuclear weapons policy as “an abdication of responsibility”. As a pacifist opposed to nuclear weapons, I agreed with Amartya Sen, but, I asked, show me evidence of one single time when you opposed the acquisition of nuclear arms in the West – such as it is. Nothing.

Very many South Africans continue to use the United States and Washington as a reference point for all global perspectives. When the White House (see, I did not have to explain what the “white house” is) spokesperson Jen Psaki said (going back to when she was spokesperson for foreign affairs) that the US government was opposed to invasion of sovereign states, and the killing of civilians, and that the US had no policy of regime change or “political transitions”– everybody simply accepted it.

Whataboutism deployed here would have listed US involvement in overthrowing democratically elected leaders from Iran in 1953 to (allegedly) playing active roles in the assassinations of Patrice Lumumba in Congo, Salvador Allende in Chile and Manuel Noriega in Panama. There is a long list of US wars, invasions and occupations of sovereign states.

As for Psaki, whataboutism would have provided an understanding and perspective on how the US has violated UN conventions with the invasion of sovereign countries from Grenada to Libya. It does not matter whether you “liked” Allende, Mohammad Mossadegh or Muammar Gaddafi.

But what we cannot do is have selective morality, or assume that injustice against one people counts more than injustice to others. We cannot decide, as has been reported, that “blue-eyed, blonde-haired” people are more important than Arabs or Africans. 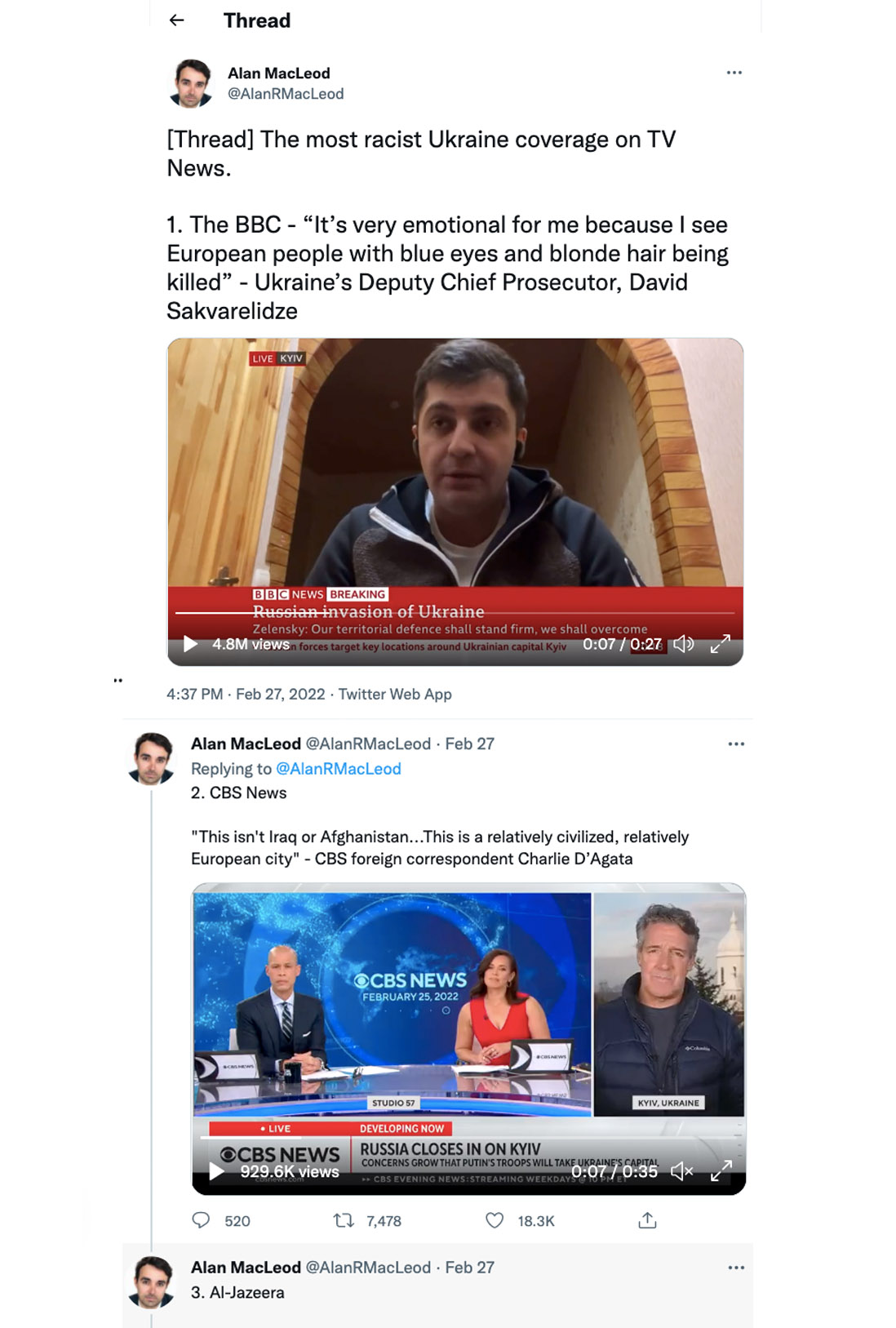 Meanwhile, on CBS News, foreign correspondent Charlie D’Agata was reporting from Kyiv. He said, “This is a relatively civilised, relatively European city where you wouldn’t expect that or hope that it is going to happen.” He also said this wasn’t “Iraq or Afghanistan” – countries that are clearly synonymous with conflict. D’Agata later apologised in a broadcast.

About, incidentally, “countries that are clearly synonymous with conflict”… from the Korean War in 1953 to the war on the Iraqi people in 2003, the US has been involved in at least 13 that we know of. And just for the record, the US has not won any major wars since the end of World War 2.

So, whataboutism, which is so readily dismissed – and which is so frequently abused to deflect blame or responsibility – can be important, to set the record straight, uncover surface forms of justice, peace and equality (or even pacifism), reveal inconsistencies and duplicity, as well as provide context and perspective. DM