Women are being squeezed out of the digital economy

As government pins its hopes for our economy on the transformative power of the Fourth Industrial Revolution, it must also take account of the need for specific and targeted policies to bring women and girls into the digital space, and ensure that gender gaps are closed across the board.

As the world celebrates International Women’s Day, it is timeous to highlight women’s inequality in the Fourth Industrial Revolution (4IR). The Covid-19 pandemic has fostered a previously unimaginable digital transition in the global economy, with changes evident in South Africa as much as elsewhere.

The digital transformation has consequences for the whole of society — women and young girls included. However, despite the South African government’s efforts to advance the development of digital technology and implement initiatives to increase its adoption, the gender digital divide seems entrenched.

4IR has revealed considerable inequality in South Africa, especially among unskilled and low-income citizens, among whom women and girls represent the majority. Factors such as gender stereotyping, digital illiteracy, inaccessibility to data and discrimination have confirmed digital gender exclusion in the country.

South Africa ranks as one of Africa’s top ten countries in terms of high data costs. We have heard numerous complaints about how data costs limit people’s access to the digital world. Statista reports that in 2021, only 38.13 million South Africans out of a population of more than 60 million were active internet users. The remaining 21.87 million are still without access, representing a margin higher than many other African states. There are still some spaces where gender digital inclusion is rated very low. The table reflects the percentage ratings on gender inequality in South Africa. 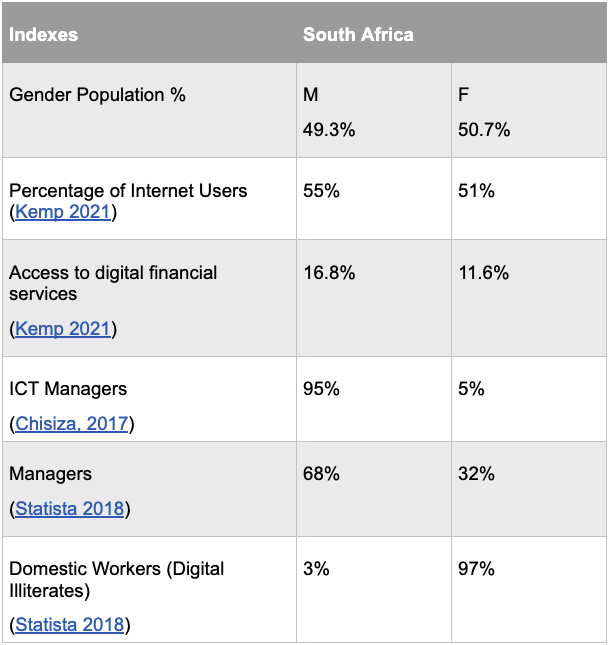 The statistics given here indicate gender parity in different domains in South Africa. There is still a low percentage of women accessing digital financial services, with 11.6% compared to men’s 16.8%. In addition, women only occupy 5% of ICT industrial senior manager positions in South Africa, indicating a high rate of under-representation.

Researcher Matebe Chisiza further elaborates on the employment gap in the ICT profession, noting that only 2.9% out of 22% of female graduates in the field are employed in it. As a result, the gender divide will continue to widen in 4IR unless appropriate measures are taken to adopt sustainable digital policies relating to gender.

Beyond the ICT sector, inequality is well established in the labour market, with working women in South Africa earning less than their male counterparts. And since most jobs now have a digital component, the gap in the numbers of women who are able to secure a sustainable job becomes more prominent.

As evidenced in the table above, women represent 97% of domestic workers, reflecting the reality that women are most prominent among those with low employment status. The table also suggests that a lack of digital literacy may hinder the achievement of senior management positions.

Statistics for developed countries show that there too is a gap — women’s access is on average 12% lower than that of men.

Government initiatives are needed to address this.

The Minister of Communications and Digital Technologies declared in 2021 that by 2024, South Africa’s new digital policy would allow more than 80% of the population to have internet access — a huge leap from the current 56.3%. President Cyril Ramaphosa has made several efforts and established a presidential commission of experts to ensure that technological advances benefit all citizens and not just the select few. According to him:

“By 2030, we aim to be a nation that has fully harnessed the potential of technological innovation to grow our economy and to uplift our people. To this end, we have established a Presidential Commission on the Fourth Industrial Revolution to develop an integrated national response strategy.”

The government can harness its infrastructure to facilitate equal representation in all spheres, using education, opening up access and implementing policies to motivate girls and women to embrace digital literacy.