Literally hundreds of jokes exist on statisticians and statistics. There are good reasons hardly any of them are flattering, as once again demonstrated by the GDP data for the third quarter of 2021, published by Statistics South Africa (Stats SA).

The statement that the South African economy contracted by 1.5% during the third quarter is misleading, as this figure has been subjected to a calculation of quarterly GDP data that has been annualised and adjusted for inflation via a variety of deflators.

When following the good advice contained in the Glossary of Statistical Terms published by the Organisation for Economic Cooperation & Development (OECD), namely, to simply calculate real quarterly GDP growth rates on a year-on-year basis, deflated by a benchmark deflator such as the consumer price index (CPI), a much rosier picture of the South African economy emerges.

During the third quarter, total economic output at market prices amounted to R1,566-billion. The figure for the same quarter in 2020, adjusted by the CPI, was R1,474-billion. This represents a healthy real growth rate of 6.2% – not half bad when considering the devastation caused by looters in parts of KwaZulu-Natal and Gauteng in July.

In nominal terms, the year-on-year growth rate was a very impressive 11.5%.

The table illustrates the substantial difference between the growth rate calculation that is always highlighted by Stats SA and the one recommended by the OECD (measure #4, printed in bold).

Two significant advantages of using year-on-year comparisons of quarterly GDP data rather than a quarter-on-quarter approach are, first, the avoidance of magnifying irregular economic phenomena, such as harvesting seasons for agriculture and chance events such as a natural disasters or a health pandemic.

Second, it obviates the need for complicated formulae aimed at eliminating seasonality. As such, the year-on-year approach is more objective.

Justification for a belief that the economy did not contract meaningfully during the third quarter is provided by several key indicators, including the following: 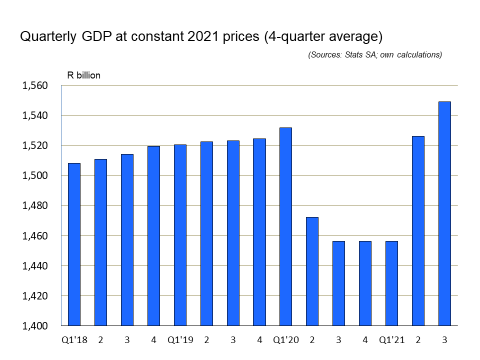 There is no doubt that the South African economy underperformed during the third quarter, mainly as a result of the July unrest. It is disingenuous, however, to create the impression that economic activity is in decline when exactly the opposite is true, as vividly illustrated by the increase in the four-quarter moving average for quarterly GDP to a new all-time record high (in real terms). BM/DM