Professor Nadine Strydom is a marine biologist with the Department of Zoology at Nelson Mandela University.

The impacts of seismic blasting are obvious and in the absence of sufficient published evidence, a precautionary approach should be adopted for South Africa — this is standard practice in the responsible use of marine resources worldwide.

Shell’s proposed seismic blasting in the exploration for oil and gas off South Africa’s Wild Coast falls directly over economically important fish spawning and feeding grounds on the continental shelf and continental slope.

This area is an important feeding and spawning area for many commercially important fish species, many of which undertake spawning migrations past this area to warmer waters in KwaZulu-Natal. Exacerbating this is the timing of the seismic survey which coincides directly with peak fish spawning activity along the coast.

Survival of fish eggs and larvae each year contributes to the future population that can be fished in subsequent years. Disrupting spawning and increased larval fish mortality can affect the prosperity of South African fisheries in subsequent years. The continental slope is particularly important for fish spawning due to higher productivity boosting the food chain due to shelf edge upwelling. The seismic surveys also coincide with the annual migration of three species of whales into our waters (Southern Right, Humpback and Bryde’s), most often accompanied by calves.

Seismic blasts are as loud as a rocket launch or dynamite explosions underwater and international research has shown that not only is the disturbance or damage enormous for larger marine life but also for the smaller animals, such as microscopic zooplankton, which are the base of the marine food web. They also suffer the effects of shock waves, increasing mortality in areas up to one kilometre from each blast centre.

The Wild Coast is one of our richest and most sensitive stretches of coast, including four Marine Protected Areas, and the effects of blasting apply both to animals living in the survey areas, as well as those passing through. The explosions that occur every few seconds for weeks on end during exploration for oil and gas deposits can have both direct and indirect effects on marine life, varying from direct death, damage to animals or deviations from behaviour of animals due to fright that disturbs their activities, such as feeding, reproduction and migration.

Sound waves travel much faster underwater than in air and affect all animals living in blast zones that have complex hearing such as marine mammals, turtles and fishes. The sound can extend for tens of kilometres.

Shell and our government, in pursuing seismic blasting along our coast, have shown complete disregard for the integral role that our oceans and marine life play in the livelihoods and lives of ordinary South Africans. This is our natural heritage that is being gambled with as well as the integrity of our marine resources that are relied upon by our tourism and economic sectors as well as coastal communities.

This was reiterated in an open letter to President Cyril Ramaphosa, Minister Gwede Mantashe and Minister Barbara Creecy on 2 December 2021 by a large group of marine scientists, environmentalists and marine legal and coastal zone management experts from a number of South African universities, institutes and organisations, including Nelson Mandela University’s Institute for Coastal and Marine Research. 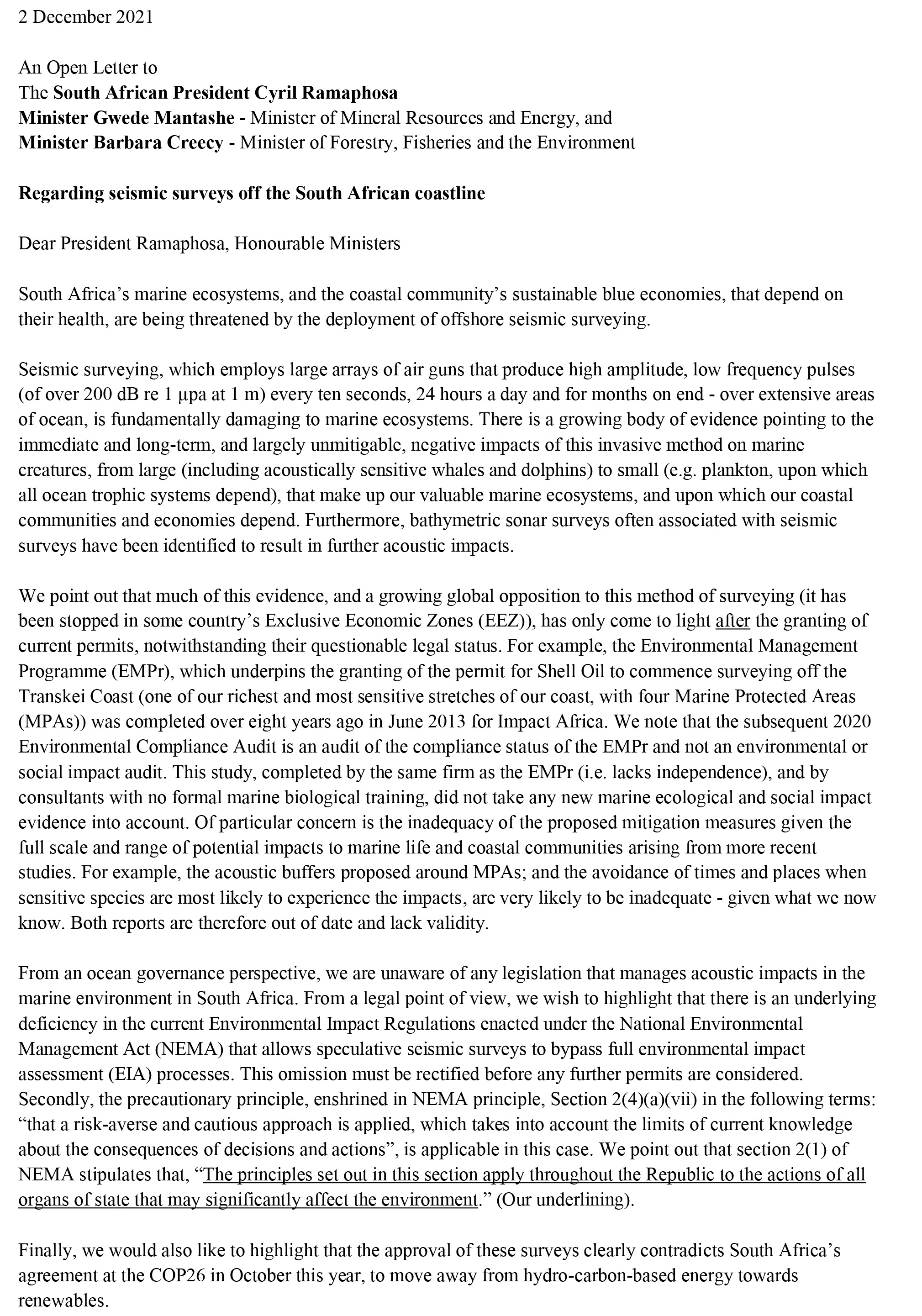 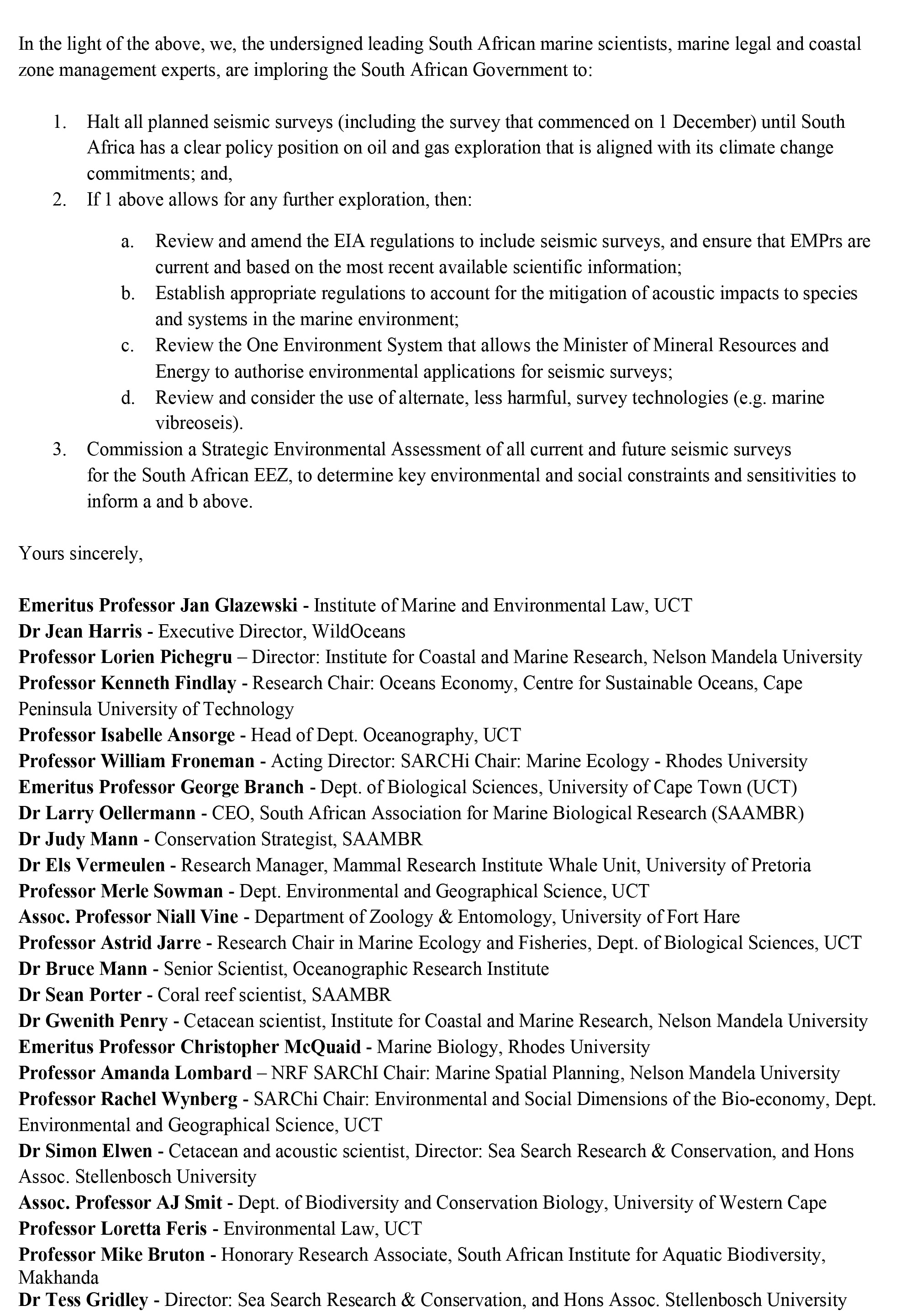 There is some evidence from international studies but the danger of such research by biologists precludes the availability of information. In October 2020, seismic blasting was halted in the Atlantic Ocean because of the threat to marine life. It marked a victory for dozens of organisations and thousands of coastal communities and businesses in a year-long legal and public battle, which included arguing how seismic blasting endangered North Atlantic Right whales and other vulnerable species. “This is a huge victory not just for us but for every coastal community that loudly and persistently protested the possibility of seismic blasting,” said Catherine Wannamaker, a senior attorney at the Southern Environmental Law Center in the US.

The impacts of seismic blasting are obvious and in the absence of sufficient published evidence, a precautionary approach should be adopted for South Africa — this is standard practice in responsible use of marine resources worldwide.

South Africans leading this legal challenge state that “from an ocean governance perspective, we are unaware of any legislation that manages acoustic impacts in the marine environment in South Africa. From a legal point of view, we wish to highlight that there is an underlying deficiency in the current Environmental Impact Regulations enacted under the National Environmental Management Act (Nema) that allows speculative seismic surveys to bypass full environmental impact assessment (EIA) processes. This omission must be rectified.”

They also emphasise that the precautionary principle is enshrined in Nema, which states that “a risk-averse and cautious approach is applied, which takes into account the limits of current knowledge about the consequences of decisions and actions”.

In addition to all this, South Africa is a major polluter, among the top 15 countries in terms of greenhouse gas emissions worldwide. We all know that South Africa is in an energy crisis, but the solution is not to search for more non-renewable energy supplies at the cost of our rich marine biodiversity. What we have to do is green our growth and there is much research and modelling, including from South African universities and international organisations such as the United Nations Environment Programme (Unep), which shows that green growth can achieve higher economic activity and employment while also reducing our CO2 emissions.

South Africa has a wealth of green economic policies and targets. We are rich in both sunlight and wind and our investments with international partners need to honour commitments by our president before and during COP26 to reduce non-renewable energy sources. These always come at great cost to the environment while we simultaneously battle the environmental effects of climate change driven by the burning of fossil fuels.

I reiterate the call by scientific colleagues to the South African government to, inter alia, “halt all planned seismic surveys (including the survey that commenced on 1 December) until South Africa has a clear policy position on oil and gas exploration that is aligned with its climate change commitments. This should be coupled with a commission to conduct a Strategic Environmental Assessment of all current and future seismic surveys for the South African Exclusive Economic Zone (EEZ), to determine key environmental and social constraints and sensitivities that inform the granting of these applications.”

The rise of the public to unite in voice to protect our oceans and natural resources is a noble cause and one that is supported by the scientific community, based on sound reasoning and balance of argument. DM