In a minimalist democracy, the elected official dissolves into the background of politics and society, and voters have little to no chance of participation or exercising some form of accountability. The only time the public ‘sees’ or hears about an elected or professional position is when there is a scandal, ethical lapses, maladministration fallout and, well, corruption. This cycle starts again at the next election.

There are little more than two weeks to go until the local government elections (LGE21) and the three main political parties are scrambling for votes. On a temporary (non-ideological spectrum used only for its graphic use) the DA (that doesn’t see race) and the EFF (that see nothing but race) provide the bookends, with the ANC somewhere in the middle blowing like a storm on a distant planet — the emphasis on “distant”.

In this scenario the EFF is making connections, the DA is breaking connections and the ANC is becoming about as distant and irrelevant to South Africans as Jupiter’s red dot. In other words: what’s the point of the ANC anyway?

The EFF, should it become the government anywhere, may well change things; things not everyone will agree with. The DA, like the Freedom Front Plus, for that matter, will focus on “its people”. The problem with the Good Party is that it is bringing a can opener to a post-modern military battle.

But what does seem to go unnoticed, and it started swelling in about 2007, is that South Africa has become a minimalist democracy and, for better or worse, has abandoned even the most egalitarian notions of good governance and institution-building. All of this has become much more prominent during the current electioneering for LGE21.

When you look at images of politicians cutting ribbons, making outrageous and invariably populist, and sometimes quite provocative, claims and statements in these weeks before the LGE21, it has become clearer that South Africa has become a minimalist democracy.

How absurd or desperate, manipulative and exploitative (of the difficulties of the poor) do you have to be to praise electricity theft. This is a new spin on the ANC’s 1994 pledge that everyone will have free electricity, and now we sit with billions of rands of unpaid electricity bills. The DA keeps making like a democracy, but has over the past few weeks turned itself into a laughing stock of South African politics. Helen Zille (bless her heart) took a leaf out of Donald Trump’s playbook, claiming supreme knowledge and insights on things. 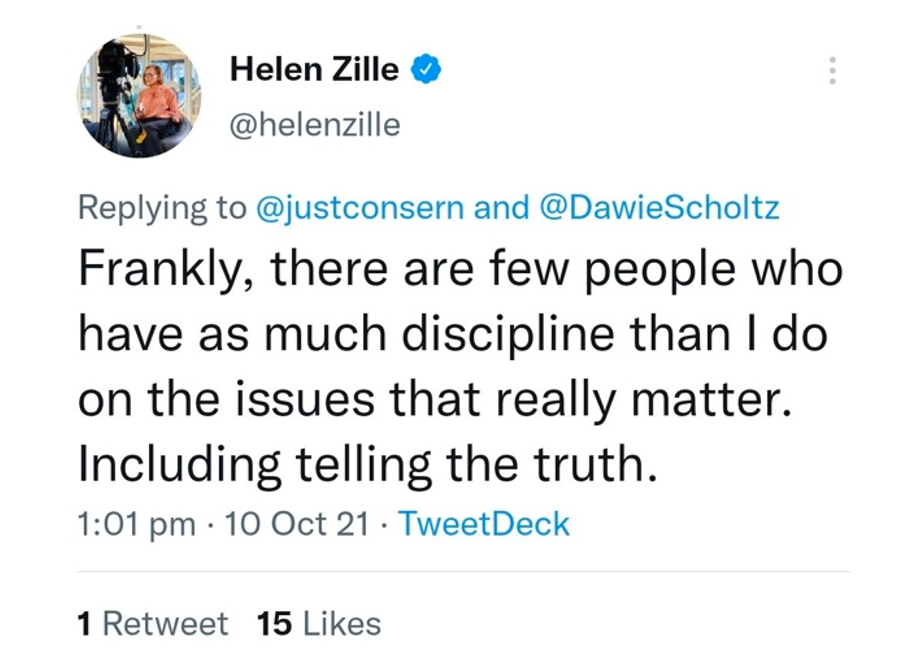 This is Donald Trump claiming to know more than anybody about (insert anything here).

The DA’s Phoenix poster blaps has been well reported, as has John Steenhuisen’s support and then his about-turn on those populist, expedient, exploitative and manipulative election (a bit, a lot like the EFF, la) posters. In the meantime, Natasha Mazzone has been getting into Twitter wars and, well, has used her 6’2” frame and body size to provoke (or defend) whatever she has said or done… it’s becoming rather seedy down the DA way.

Say hello to LGE21 and wave goodbye to participatory democracy

One of the things we have come to learn, and what has turned so many people away from political parties and some of their leaders, is that they visit communities only when they need votes. All of this also feeds into the idea of what has been described as a “choiceless democracy’’. At the level of perception we may seem choiceless in the forthcoming election, but I do believe we have a choice, even if it’s choosing None of the Above, or Nota.

One research project at Duke University in the United States found that voters with a protest motive who are either unhappy with a candidate or with the political establishment in general, choose Nota. Duke found that introducing a Nota option on the ballot increased participation, but it can reduce the votes for non-establishment candidates. So, for instance, if you don’t want to vote for the EFF, the DA or the ANC and go for the Nota, you may deprive, say, Good, ActionSA or Al-Jama-ah of a vote.

It is worth bearing in mind that things can go awry with the Nota or so-called Blank Box option on a ballot paper. In a 2018 local government election in Makassar, Indonesia, the electoral commission decided to re-run the election for mayor and deputy mayor after a blank box or Nota won the popular vote. In that case, two unopposed candidates, Munafri Arifuddin and Andi Rachmatika Dewi received 47% of the vote (lower than the 50% threshold) while the blank box won 53%.

All of this notwithstanding, what may be said with some confidence is that South Africa has become a minimalist democracy. In such democracies, once a candidate has been elected s/he tends to dissolve into the background of politics and society, and voters have little to no chance of participation or exercising some form of accountability.

At the national level, members of Parliament (mostly ANC MPs, to be fair) are allegedly the most guilty of shirking constituency work. The only time the public “sees” or hears about an elected or professional position is when there is a scandal, ethical lapses, maladministration fallout and, well, corruption. This drags South Africa very close to being a minimalist democracy. This idea of a minimalist democracy dovetailed after the so-called second wave of democratisation in Africa during the 1990s, with what was described as “disciplining democracy”.

In such a minimalist order, the democracy that was adopted or accepted in very many African countries — by various means of coercion and consent — during the 1990s was and remains necessary, but insufficient. In a minimalist democracy there is an emphasis on political rights as a way forward, but with social and economic rights gradually disappearing in the rear view mirror. This emphasis on political rights tends to satisfy international organisations and donors as long as there is no talk of social or economic justice. These invoke fear of dirigisme as a gateway to socialist intervention, which is just wrong.

What we saw, then, in the 1990s were “strong” political leaders and long-serving political parties, but with little social and economic upliftment over the next two or three decades. That is where South Africa currently finds itself. When things go right, “the market” is given credit, and when things go wrong, it’s the state’s fault — so it’s best to reduce the role of the state. State officials will come knocking only when they need the vote every two or five years.

After the election, citizen participation is cleverly proscribed by claims that “you elected us, let us get on with doing our job”. We need no reminding of what “job” the municipal governments around the country have done in the country over the past 12-15 years.

The fact is that even in a most limited form, democratic public participation (between elections) can increase the influence of citizens, encourage more pro-poor policies and demand greater transparency and accountability — especially in times of general economic austerity.

For what it’s worth (it might be out of place, here) all of the above makes it even more important to break the interface between electoral cycles and public administration. DM