The 13 September 1989 peace march led by, among others, Archbishop Desmond Tutu and Cape Town Mayor Gordon Oliver sent an unambiguous message: the anti-apartheid movement was unstoppable. It was a time of global change: The Berlin Wall fell, the Soviet Union was collapsing, Namibia was on the verge of independence — all this freedom was swirling in the air when 30,000 Capetonians marched for peace and democracy.

Today we commemorate one of the largest nails in the apartheid era’s coffin: the peace march in Cape Town on 13 September 1989.

On that day an estimated 30,000 people, led by Archbishop Emeritus Desmond Tutu, Gordon Oliver — then the city’s mayor — religious and civic leaders, as well as trade union and business leaders, marched through the city centre in what was said to be the largest protest march since the 1960s, when the apartheid government banned several political parties.

It was a seismic event, coming at a time of massive political change.

In 1989 South Africa was at a political crossroads. Apartheid was in its death throes and the march was significant for its size, its multiracial character and the fact that the minister of police recanted on an earlier prohibition against it.

The first blunder is memorable. The 13 September march pivoted off an event that is still today seared into memory: the police turning water cannons that spewed purple dye on anti-apartheid protesters in Greenmarket Square on 2 September 1989. The purple dye stains caught the imagination of media across the world, and of the South African public, and overnight graffiti proclaiming “the purple shall govern” – a play on the 1955 Freedom Charter’s first clause: the people shall govern – appeared on walls across the city overnight.

This phrase emblazoned the banners carried by many of those who took part in the 13 September march. Interestingly, cartoonist Jonathan Shapiro, better-known as Zapiro, had previously created a cartoon for a United Democratic Front (UDF) calendar that showed the police using the purple dye in water cannons. 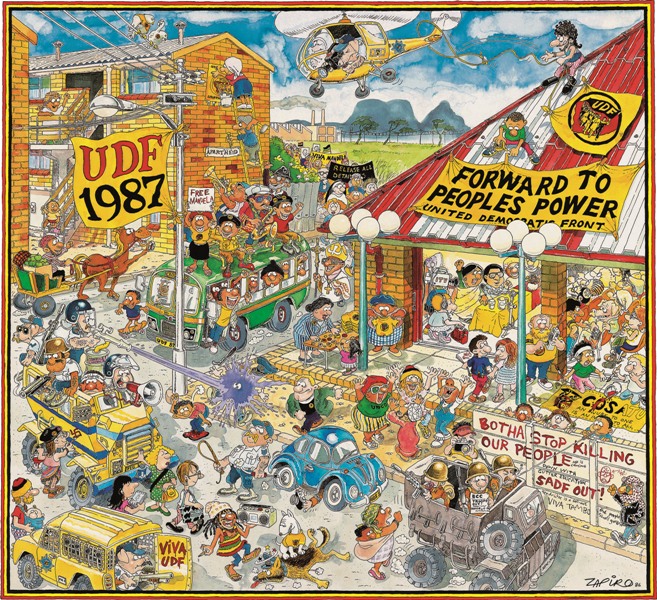 Speaking of the cartoon, Shapiro says: “I did it at the end of 1986. It’s my Forward to People’s Power 1987 UDF calendar poster, which has both the Arch leading a public march and a police cannon with purple dye that misses a protester and hits a policeman. This depiction was my little joke about the police starting to use purple dye cannons and seems strangely prescient of the events of almost three years later.”

That image found its way out of the calendar and on to many an activist’s wall.

The protesters were pushing for a South Africa in which all were free and equal, a more just and generous country. The events of September 1989 are so significant for the archbishop that the coming Truth to Power* exhibition that will mark his 90th birthday will feature it and its impact on South African society.

Today South Africa again finds itself at a crossroads. Once again South Africans must decide how to ensure that their future is one of justice, generosity, freedom and democracy. Today we must do more than simply recall a decisive event, we must renew our commitment to the moral and ethical grounds of our freedom.

Too many South Africans still do not enjoy the full benefits of our hard-won democracy. We are a society plagued by one of the world’s highest inequality rates, unsurprisingly coupled with one of the globe’s highest unemployment rates. (Our unemployment rate hit a new record in the second quarter of the year: 34.4%.) Poverty is widespread.

Back in September 1989 it was easy to despair. The last days of apartheid included political deaths and detentions, the police reaction to the 2 September protest was to turn powerful water hoses on kneeling protesters. Many were arrested. But the turning point in that demonstration was when the water hose was turned onto the police and the buildings surrounding Greenmarket Square, including the offices of the then-ruling National Party (NP).

That man, Philip Ivey, was at the time treasurer of the Western Cape’s End Conscription Campaign, banned in August 1988 under the state of emergency regulations. He was arrested after the events of 2 September, but the charges against him were withdrawn and he was released. He was not alone; around 500 people were arrested that day, including Jay Naidoo, then general secretary of the Congress of Trade Unions (Cosatu); Dr Allan Boesak, then World Alliance of Reformed Churches president, lawyer Essa Moosa and Dr Charles Villa-Vicencio, then, as now, a University of Cape Town academic.

Eleven days later, the crowd of 30,000 people who marched from Cape Town’s St George’s Cathedral to the Grand Parade on 13 September 1989 did so unchallenged by the authorities. This was unprecedented.

It is easy to look back now and say that something changed after the 2 September “Purple Rain” protest, and to some extent that is true. At the time it was astounding that the police stood by as 30,000 people took over the Cape Town city centre. It is also true that the ground underneath the apartheid state was already shifting.

Today we look around at our homeland and a world that is irrevocably changed by the Covid-19 pandemic, which has wrought economic havoc, but has also caused many of us to reconsider the values that define our lives. Similarly, in 1989 shifting values promised changing lives.

In August that year the Pan-European Picnic, a peaceful demonstration held on the Austrian-Hungarian border, led to the border gate being opened, a breach in the Iron Curtain that separated democratic Western Europe from communist Eastern Europe. This set in motion a peaceful chain reaction that led to the Berlin Wall’s demise that November and an end to the Cold War that had dominated geopolitics for four decades.

Along with the Berlin Wall, the Iron Curtain fell. Later the Soviet Union disintegrated, collapsing with it a large part of the National Party’s argument against communist-backed political parties in South Africa. Furthermore, meetings between the NP and the African National Congress, then in exile, had begun in secret in 1984, with the aim of ending apartheid in a mutually favourable manner.

In turn these events, along with the South African public’s growing war weariness, compelled change on Africa’s south-western coast. By March 1990, Namibia was independent after 70 years as a South African protectorate.

All this freedom was swirling in the air when, dressed in purple, Archbishop Tutu, the other leaders and 30,000 people marched for peace and democracy on 13 September 1989.

The events of 2 September 1989 had incensed the archbishop, who on that day persuaded police to cease surrounding the hall where a number of the Greenmarket Square protesters, doused in purple dye, had taken refuge. Instead of being arrested – which was what the purple dye was all about: identifying political dissidents – the protesters were allowed to leave quietly, in small groups.

The 2 September 1989 Purple Rain protest had formed part of the Mass Democratic Movement (MDM) defiance campaign against apartheid laws. The MDM was an entity born of necessity, a loose alliance of members of the UDF and of Cosatu, both of which were restricted organisations.

The 13 September peace march sent an unambiguous message to the apartheid state: the anti-apartheid movement was unstoppable. The march was followed by mass demonstrations across the country, despite these being illegal in terms of the state of emergency imposed in 1985. In Uitenhage, in what is now Eastern Cape, an estimated 85,000 people came out in support of an end to apartheid. Fifty thousand joined them in Bloemfontein, 40,000 in East London, 20,000 in nearby King William’s Town and another 20,000 in Durban. There were smaller protests in Oudtshoorn and Grahamstown.

Furthermore, the 13 September march was remarkable for transplanting mass protest from the townships around Cape Town to the world famous Mother City’s centre. There was no turning back.

It came at a time when the MDM defiance campaign had seen restricted activists “unban” themselves and declare the UDF free to act as it wished. Archbishop Tutu himself participated in peaceful demonstrations such as declaring whites-only beaches open to all, and picnicking on them.

In 1989 South Africa had been ravaged by 40 years of official apartheid. It was economically, socially and culturally isolated, and ripe for change.

In 2021 South Africa is struggling to heal from a decade of uncapped corruption and misgovernment that has left the country poorly placed to weather the devastation wrought by Covid-19.

* The Truth to Power exhibition is curated in collaboration with the Apartheid Museum. It is a first-of-its-kind showcase to be presented by the foundation in celebration of Tutu’s 90th birthday on 7 October 2021. It will launch in Tutu’s birthday month this year to publicise the profound impact the Archbishop has had on the world.