Dr Seelan Naidoo is a research associate of the Centre for Humanities Research at the University of the Western Cape. He served as Interim CEO of the National Arts Council in 2006/07, when he led its restructuring process. He holds a PhD in Organisation Studies and Cultural Theory, and writes in his personal capacity.

Six months ago, in January 2021, all hell broke loose at the National Arts Council of South Africa. At the centre of the furore was the spectacular mishandling by the council of R300-million in emergency funding from the Presidential Economic Stimulus Programme to support artists hit hard by the Covid crisis.

The well-intentioned and much-needed R300-million emergency stimulus to support artists quickly turned sour and is still mired in controversy. The media gave voice to the artists and have rightly focused on dissecting the Presidential Economic Stimulus Programme debacle.

However, scant attention has been paid to the long durée of the causes which precipitated the stimulus programme mess. After all, the National Arts Council’s primary function is to distribute grants and other support to artists. If the stimulus programme failure is an alarming symptom, what are its underlying causes?

To respond to these questions we need to attend to the arts council as an instrument for serving the arts in South Africa – which is what the National Arts Council Act clearly says it is. The council is a national public entity under the Department of Sport, Arts and Culture with a statutory mandate, public funding, systems, processes, people, structures, an elaborate governance framework and a long history. The causes of the bungled funding are to be found at this organisational level of analysis.

In this article I take a high-level diagnostic look at the performance of the arts council, using its publicly available annual reports as evidence. The diagnosis reveals an organisation in long-term decline that is now in such a poor state that it actually detracts from the arts. The Presidential Economic Stimulus Programme debacle is just the tip of the iceberg of entrenched dysfunction at the arts council. I am so forthright in my critique because I have a duty to shed light on the true state of the council as a matter of urgency. I hope it will be understood as a constructive critique which opens up the possibility of real reform.

Organisational performance, especially of public entities, can be a complex matter to unravel because it involves many variables and contingencies. Nevertheless, by analysing its publicly available annual reports, it is possible to tell an evidence-based story of the arts council’s baseline performance in terms of its effectiveness, efficiency and accountability.

According to S16 (2)(a) of the National Arts Council Act at least 75% of money appropriated by Parliament to the arts council shall be distributed as grants in support of the arts. Therefore, the baseline measure of its effectiveness is the proportion of public funds that it distributes to artists each year.

The table below analyses these baseline measures over the 14 fiscal years from 2007 to 2020. Healthy outcomes are indicated in green, borderline outcomes in orange and poor outcomes in red. 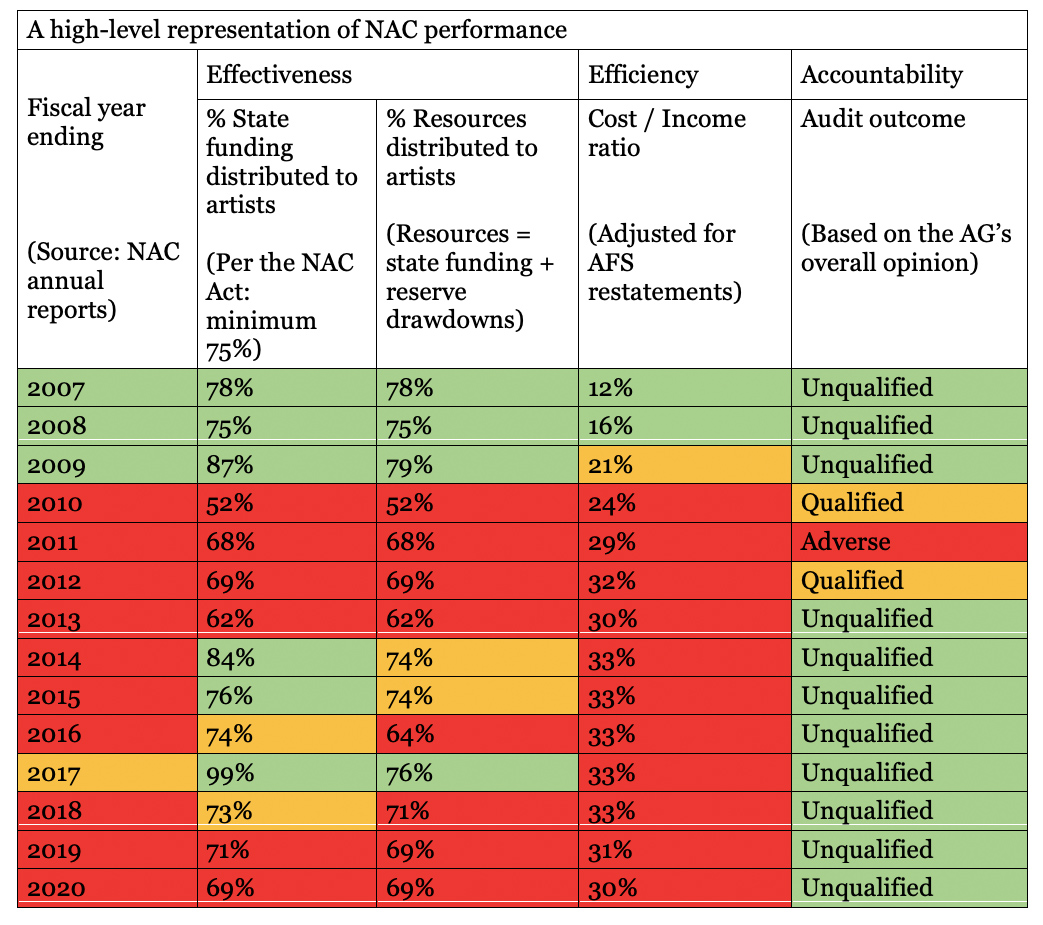