Kohler Barnard’s Zille moment: The absurdity of comparing SA’s Olympic medal count with that of the Netherlands

Set aside the map of the world, which makes South Africa and the Netherlands ‘equal’, and consider the abundance and proliferation of forms of capital accumulated by the latter over the past 400 years. Then place that next to South Africa’s barely 30 years of democracy, with all its flaws.

Much as one tries to accept and promote free speech as part of democracy, it is difficult to keep a lid on the most wilfully expedient and their pitiful attempts at intellectual occlusion. We tend to look to EFF leader Julius Malema to say tortured things out of context or make claims that are intellectually superficial, which do no more than whip up the emotions of his followers. The DA’s Dianne Kohler Barnard is not above such lowbrow manipulation. Just for the record, the ANC’s Maite Nkoana-Mashabane has given us a few gems.

Anyway, Kohler Barnard sent out a tweet at 10.04am on 9 August in response to a tweet, by one Hans-Erik Iken, which celebrated the medal haul of the Netherlands at the Tokyo Olympics: “Not bad for a tiny country with about 17 million people in it…”

In a mild case of bile rising, Kohler Barnard tweeted: “And we brought home how many?” The subtext being that a country of close to 60 million people (South Africa) ought to have achieved much more at the Olympics and brought back a few more medals. 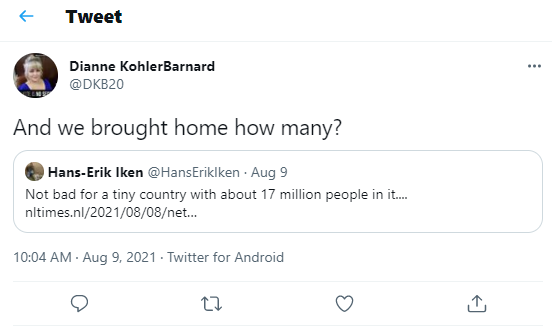 Whether or not you agree with them, understand them (which can be impossibly difficult), or you have generally signed up to their intellect and ideas, most rhetoricians (from Cicero to Roland Barthes or Jacques Derrida) have made statements that startle and inspire. Politicians, especially those who simply seek attention by asking rhetorical questions, and especially those who ask questions but don’t hang around for answers, should be held accountable and require greater scrutiny than thinkers like Barthes or Cicero. That is probably why we focus on the oration of Malema; because he is as masterful an orator as he is a manipulator of populist sentiments.

I am not drawing ideological parallels between Malema and Kohler Barnard. I do, however, think Malema weaponises all that is generally true about the history of injustice in South Africa and throws down carefully couched threats against non-Africans. Kohler Barnard, in Zille-esque fashion, “desituates” her claims and observations (removing them from all the contexts that shape states of affairs). And so my response to Kohler Barnard’s tweet was this: “You’re smart, think about history and deep wells of social, cultural, symbolic and economic forms of capital built up over more than 400 years – not all of which were benign.”

To anyone sceptical or amused by Twitter as a source of news and information, I would refer to the way that the platform entered the political arena when it was used by Donald Trump to political ends, and by South Africans as a firestarter.

Since (at least) the publication of Robert Putnam’s Bowling Alone: The Collapse and Revival of American Community about two decades ago, there has been a glut of literature on social capital. It was about two decades ago, while I was at the World Bank, that I co-drafted a paper on social capital for Jo Ritzen, a Dutch Labour Party politician who became a vice-president at the bank. That was one of those moments when you make a contribution to a draft and follow the request of your instructor – and hope your name is never mentioned. Alas, he gave me credit on the front page. I returned to academia and put all that behind me.

Anyway, those of us trained in and associated with the Critical Tradition in the social sciences (yes, Helen, including Critical Race Theory), have typically drawn on the work and ideas of the French sociologist Pierre Bourdieu (I should admit my bias immediately). Bourdieu expanded the concept of capital way beyond the elementary conception, which includes forms of capital that stress material exchanges, including immaterial and non-economic and (specifically) cultural and symbolic capital.

Bourdieu explained the way that different types of capital can be acquired, exchanged and converted into other forms to the extent that its structure and distribution reproduce the structure of the social world – including those structures, mechanisms and tendencies that we cannot detect with our senses. Once you understand this process, according to Bourdieu (I have also drawn on the ideas of the late Roy Bhaskar), understanding the multiple forms of capital necessarily assists with a more sophisticated understanding of the structure and function of the world around us.

My twitter response to Kohler Barnard is rooted in the idea that it is okay to compare all countries, as cartographic entities, but people are living there. In most cases the people in those countries are amassed within the borders of countries (or expelled) with or without their permission. If, however, you delve beyond the cartographic entities (the way things are) and consider the history and evolution of society (how we got to where and how we are), an infinitely better, more comprehensive picture emerges.

In other words, the Netherlands and South Africa are countries (on a map of the world) that enjoy internal and external sovereignty. But not all of them came to be as powerful or as weak as they are – on the surface. The Constitution of the Netherlands dates back to 1814, with important changes in about 1983. South Africa’s democracy, as enshrined in the Constitution, came into force in 1996.

The Netherlands was a force in the world for much of the period between 1585 and 1740. It was an outstanding power in world trade and shipping which effectively revolutionised the global economic order. It is possible to make the argument that the power and dominance of the Netherlands provided the impetus for European colonial expansion. For instance, Antwerp would supersede what were great economic hubs (like Lisbon, Venice and Genoa), and went on to markets on all continents of the world. Dutch power between 1585 and 1740 was unprecedented in the history of global economic development.

Now, push aside the map of the world – which makes South Africa, the US, Israel, the Netherlands and Saudi Arabia all “equal” – and consider the abundance and proliferation of forms of capital accumulated by the Netherlands over the past 400 years. Then place that next to South Africa’s barely 30 years of democracy, with all its flaws…

None of this absolves any of us from the corruption, ethical lapses, cronyism, prebendalism and violence in South Africa. What it certainly does not do, and I have to stress this, is explain away the privillege the European settler colonialists enjoyed in the country between 1585 and 1740. DM