The damage inflicted on the economy in 2020 as a result of the Covid-19 pandemic turned out to be less severe than generally anticipated.

According to Stats SA, South Africa managed to produce goods and services valued at close to R5-trillion during 2020 (at current prices), which was only 2% less than the GDP recorded during 2019.

Unfortunately, inflation swelled the negative growth rate to 7%, which is a bit of a mystery when considering the sharp decline in the consumer price index in 2020 to a level of 3.3%.

Thanks to a remarkably swift recovery of economic activity in the third quarter (an 18% quarter-on-quarter nominal growth rate) and a further solid performance in the fourth quarter (6.8% growth), the economy managed to produce 3% more between October and December 2020 than in the same period a year earlier (at current prices). 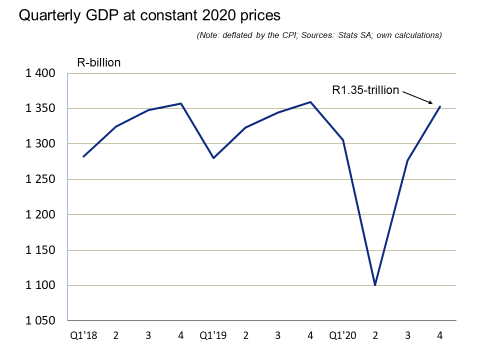 Closer scrutiny of the latest GDP data raises some questions over the accuracy of the value added by the mining sector. According to Stats SA, the latter amounted to R373-billion in 2020, almost 1% lower than the 2019 figure.

In sharp contrast, the value of South Africa’s mineral sales in 2020 amounted to R610-billion, more than 10% higher than in 2019 and a new all-time record. Furthermore, the gross operating surplus of the mining sector also increased by 3.4% in 2020 (at current prices).

Mining is the only sector next to agriculture to have managed this feat in the “year of the pandemic”.

From a demand-side perspective, it is clear that the lockdown regulations took a heavy toll on consumption expenditure related to alcoholic beverages, restaurants, transport and recreation.

However, consumers raised their expenditure levels on the categories for food, communication and education. From a significantly lower base induced by the pandemic, the former group of expenditure categories should recover handsomely during 2021.

As expected, fixed investment in new productive capacity (capital formation) fared poorly in 2020, mainly as a result of the unprecedented level of uncertainty surrounding the ultimate impact and duration of the pandemic.

In the absence of a third wave of new Covid-19 infections, the decline of 30% in the cost of capital (as measured against the prime rate) will undoubtedly incentivise a recovery of capital formation during 2021.

The stand-out feature of the GDP data for 2020, however, is the dramatic depletion of inventories in the economy, a trend that also occurred in several other countries. An increase in the value of inventories represents higher capital formation and vice versa.

The pandemic has caused the worst ever decline in South Africa’s inventory levels — R165-billion in 2020. This figure is more than 10 times higher than in 2019, when inventories declined by R16-billion.

A further perspective on the significance of this decline is provided by the change to inventories during the 10 years between 2010 and 2019, when it amounted to a positive figure of almost R7-billion per annum — not very significant relative to GDP.

Indeed, if inventories had recorded zero change between 2019 and 2020 (a realistic scenario in the absence of a so-called “black swan” event), South Africa’s GDP would have increased by 1.2% in 2020, instead of decreasing by 2% (in nominal terms).

Herein lies an economic growth driver that will supplement the lowest interest rate environment in 50 years, namely the inevitability of a reversal of fortunes for inventory build-up.

When other growth drivers are added, such as the country’s new infrastructure drive, public sector job creation programmes and signs of recovery in construction activity (the most labour intensive sector in the economy), it becomes clear that a 5% real growth rate in 2021 is well within reach.

President Ramaphosa and his team assisting the process of economic reforms and enhanced corporate governance in the public sector will be elated by the latest GDP data, as these efforts will be reinforced by higher economic growth and job creation.

The two factions in the ANC remain at each other’s throats and, unfortunately, the one represented mainly by people accused of corruption and State Capture still has many sympathisers within the party’s ranks.

A return to high economic growth will swell fiscal revenues and assist in expediting the government’s recovery and reconstruction plan, including the extension of a basic income grant to the unemployed. This should serve to silence some of Ramaphosa’s fiercest critics. DM