Dr Miriam Altman is Director of Altman Advisory, Professor of 4IR Practice at the University of Johannesburg, and a Commissioner on the National Planning Commission in the Presidency. She writes in her private capacity.

Tito Mboweni’s 2021 Budget presents a growing conundrum, with more questions than answers. The numbers round out to much-needed fiscal sustainability. But these numbers rely heavily on significant, as yet unresolved assumptions, most notably related to the public sector wage bill, state-owned enterprise debt and municipal finances.

Mboweni’s 2021 Budget has to reveal a credible path to stabilising public finances, while also enabling activities that promote progression to a decent life. Elements of these can be sequenced, but there have to be material signs of both in the near term. Otherwise, the goals of fiscal sustainability will be scuppered early on by political demands, pushing South Africa into a vicious circle and locking it into stasis or worse.

So much of the discourse on public finance revolves around either cutting spending and/or raising taxes. These are naturally two elements in the equation, but they are static. A more dynamic approach asks about the “X-Factor”. It is well known that there is significant space in the public sector to improve both the composition and the quality of spending. It is also well known that there is substantial opportunity for strengthening revenue collection. Given the size of the public sector, even small improvements can have important growth-inducing, confidence-boosting effects. The difference between static and dynamic effects is that lifting taxes or cutting expenditure offers one-off improvements and could even have growth dampening effects. Dynamic approaches enable continuous improvements over time.

Does the 2021 Budget demonstrate hope that a balance has been found?

This budget was never going to be an expansionary one.

Non-interest spending (not including SOEs or COVID expenditures) contracts by 0.8% pa in real terms. So, by that definition, it is austerity but a very mild version.

No doubt public finances need some hefty attention. The chart below shows the fast-rising trajectory of Government’s debt-to-GDP ratio since 2017. 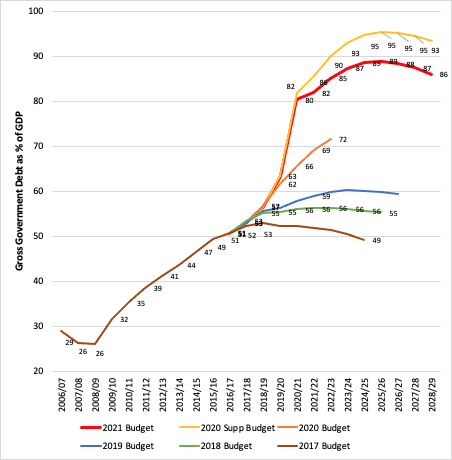 In that year, the Treasury stated that it could not with certainty forecast this ratio due to significant risks – most notably that posed by SOE and municipal finances, and a spiralling public sector wage bill. All of these risks have shown up as real. The level of debt is a problem given that currently 20% of all revenue pays off interest rather than delivering services. But the bigger problem is that the debt has spun out of control. The 2021 Budget seeks to reel it in.

Some big assumptions are made to achieve this – are they valid?

Credibility will be tested by the following in 2021:

The public sector three-year wage agreement formally ended in March 2020. The fiscal framework depends heavily on savings in the wage bill – R 303 billion over the four years from 2020/1 to 2023/4 to be precise. This is a big assumption given the hostility wrecked in the final year of the wage agreement and the seeming lack of readiness for the next three years. Negotiations are now being done on year-to-year basis until further notice. The combative narrative about a bloated public service does not help. One must remember that while there may be many paper-pushing bureaucrats, public servants are mainly health workers, teachers and police who work in very difficult and strained conditions. The majority of the population depends on the delivery of services by them.

More needs to be revealed about the status of these negotiations and how they will shift to a more productive set of relations. A more productive engagement would focus on negotiations that align a sustainable wage path to strengthening service delivery: about performance, the composition of employment – with fewer bureaucrats and more staff at the coal face of delivery, and ensuring that the ethos of “right skill for the job”.

The State-Owned Enterprises are meant to offer government a vehicle for delivery of big infrasructure and off-balance sheet finance. Instead they are weighing heavily on the fiscus and falling short on delivery. Since 2008, R188.7-billion has channelled to Eskom, with a further R77-billion expected over the MTEF. SAA should get almost R37-billion between 2017/18 and 2022/3. PRASA received R80-billion in capital spending and an annual R10-billion for operating costs but is a shadow of its former self.

The NPC’s report on SOE Performance highlights the need for better and stable appointments on SOE boards and executive management, transparent procurement, and the introduction of deeper public-private cooperation, most notably in energy procurement and port and rail lines. In 2021, watch for the appointment of the ESKOM board, the creation of an ITSMO by ESKOM, progress in energy procurement and the concessioning of rail and port facilities by Transnet.

On the positive side, the Budget 2021 revealed some smaller but highly significant allocations, that should give pause:

Covid expenditures are meaningful in the budget and it was good to see an expansion in the contingency fund. The R9billion allocated to vaccines gives some new certainty and hope that the economy will soon return to action. Continued support for COVID-affected companies and COVID relief grants are also welcome.

But giving with one hand and taking with the other, the non-COVID health budget strangely falls by R2billion, mostly focused on personnel spending, in a context where there are staff shortages and even greater stress on the system.

On the revenue side, it was good to see R3billon allocated to SARS over the MTSF to strengthen digital systems and revenue collection capacity. This is not a massive allocation but is mission-critical. The fiscal framework depends heavily on SARS’ capability to strengthen collection.

It is worth remembering that this budget is buffered by an expectation that the global economy will recover faster than anticipated, and that is especially so for China and India. Already commodity prices have elevated. No matter what happens domestically, SA is lifted by the global wave. Will this bolster commitment to a fiscal framework, or will it be used to buffer politicians? Minerals economies like SA tend to ride the wave and avoid hard reforms.  Policymakers will have to resist the tendency to slow down structural reforms and public sector efficiency initiatives in response to this buffer. Instead, they should rather use the “windfall” fiscal space to speed up.

We will need to see considerable Presidential and cabinet-level commitment to what is proposed in this Budget. The Minister of Finance is never a popular figure in any country, for obvious reasons. Securing a fiscal framework and sticking to it requires discipline.  Having said that, a credible path to fiscal health will require one that is politically plausible, even if it takes longer to implement. BM/DM