Making multinationals and the wealthy pay

The Covid-19 pandemic will leave the world economy bruised and bloodied — the wrong tax policies would compound the damage in the short term and impede recovery in the longer term.

Just a few months into the Covid-19 crisis, public sector balance sheets are already under severe strain. As lockdowns and physical distancing protocols curtail economic activity, many advanced-country governments have launched large-scale monetary and fiscal stimulus measures. This, while tax revenues are plummeting and unemployment is skyrocketing, implying a steep rise in future government expenditure.

The outlook is especially bleak for developing countries, many of which lack the fiscal space to pursue stimulus and fear capital flight if they try. Some are even embracing fiscal austerity, which will make it virtually impossible to restart their economies and replenish government coffers.

The unavoidable reality is that, in developed and developing countries alike, reviving demand – and thus GDP growth – will cost a lot of money. That money will, directly or indirectly, come primarily from government budgets. Even when large private corporations pledge to invest, they hold out for tax breaks, loan guarantees, and other expensive incentives.

In some countries, such as the United States, the wealthy are getting their wish. But in the current context, tax cuts will do little to stimulate investment. There is too much excess capacity and too little certainty about future demand.

It is impossible to say how far global tax revenues will fall as a result of the Covid-19 crisis. But, between tax breaks for corporations and falling incomes, it is safe to assume that the decline will be much larger than the 12% drop during the 2007-09 global financial crisis. 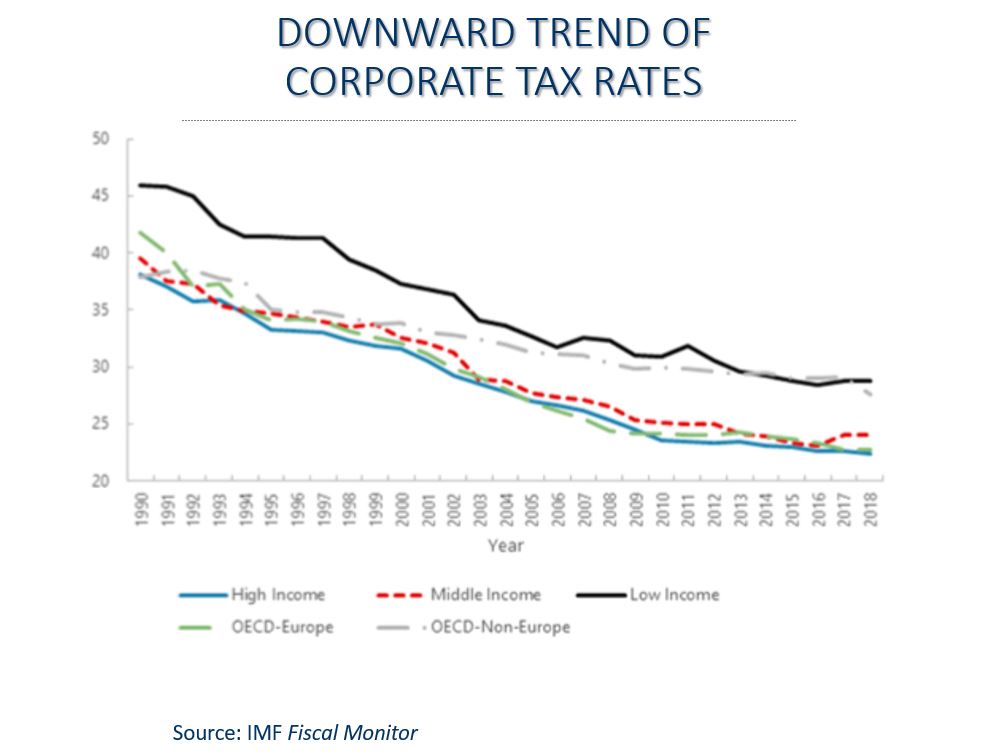 Clearly, governments need to find a way to increase their revenues. Cutting taxes for corporations isn’t it. Nor is raising taxes on ordinary workers, which would exacerbate already widening income and wealth inequality.

As we argue in the latest report of the Independent Commission for the Reform of International Corporate Taxation, governments should focus instead on boosting corporate tax revenues, including by introducing more progressive tax systems and putting a floor under tax rates, in order to curb competition.

Potential new tax revenues obviously exist. Some multinationals are thriving during the pandemic. During the first quarter of 2020, when most economic activity ground to a halt, Amazon’s sales surged by 26%. Multinational pharmaceutical companies are scrambling to develop diagnostics, therapeutics and a vaccine, in the expectation that patents will bring handsome profits. The S&P 500 has now recovered all of the losses it incurred since the start of the crisis.

Furthermore, many multinationals operate as quasi-monopolies or oligopolies, and thus extract large rents on which they pay little or no tax. In fact, by exploiting loopholes and tax havens or low-tax jurisdictions, the largest companies often manage to pay less in taxes than small and medium-size enterprises. This is both unfair and undermines job creation. These rents should be taxed through progressive profit taxes, with higher rates on larger firms and lower rates on smaller firms in highly competitive sectors.

The most effective response to such tax avoidance requires international cooperation. But multilateral reforms, pursued through the OECD’s inclusive framework on tax base erosion and profit shifting (BEPS), will not be implemented until later this year at the earliest. The withdrawal of the US from the negotiations has complicated matters further. And any additional revenues the reforms generated would not arrive until 2022 at the earliest.

In the meantime, governments should move individually – or in the European Union’s case, at the regional level – to introduce a 25% effective minimum tax rate on multinationals’ global profits. Such an effort would actually build upon US minimum tax rules.

Governments shouldn’t stop there. Following in the footsteps of France, India, and the United Kingdom, countries should introduce progressive digital-service taxes, which would force digital businesses to pay their fair share where their customers are located. Because digital multinationals often face negligible marginal costs, taxing turnover is equivalent to taxing profits. It is thus not distortionary.

Boosting transparency would also go a long way toward combating tax avoidance. To that end, governments should require multinationals receiving support during the pandemic to publish country-by-country reports in which they reveal where they recorded profits and paid taxes (if any).

The OECD can also help on this front. In 2018, almost 100 jurisdictions automatically exchanged information on 47 million financial accounts worth approximately €4.9-trillion ($5.5-trillion), through the OECD Global Forum’s Automatic Exchange of Information programme. Yet the aggregate data on overseas private wealth, by country of origin and destination, is not publicly available. The OECD should publish it.

Doing so would enable taxpayers to hold their governments to account for failing to tax undeclared offshore assets. It would also facilitate the adoption of effective progressive wealth taxes and help governments monitor effective tax rates on the top earners in their jurisdictions.

The costs of the pandemic are already being borne disproportionately by the poorest and most vulnerable. The economic burden of rescue packages must not be. With well-enforced, progressive corporate tax systems, governments can ensure that those who have the most – and have long avoided paying their fair share – start pulling their weight. BM

Pandemic SNAFU: Rising infections, slow vaccinations and a call for a malfeasance inquiry