Finance Minister Tito Mboweni’s revised Budget is the last nail in the coffin of a poor majority already doomed to hell.

Finance Minister Tito Mboweni did not surprise the South African Federation of Trade Unions (SAFTU) or anyone who has come to know what he represents. He began his speech by confirming to President Cyril Ramaphosa his “path for the direction you gave us on 21 April to not merely return our economy to where it was before the coronavirus, but to forge a new economy in a new global reality”.

The path Treasury has chosen instead is to return South Africa to the worst features of the old economy: austerity (now with a “Zero-Based Budgeting” gimmick), deindustrialisation, unwarranted debt and financialisation.

Mboweni spoke about two gates: One apparently leading to prosperity and the other to hell. The ruling class and the ruling elites of which Mboweni is a member of both are living in heavens on Earth while the black working class and all others in the marginalised black majority have been in hell for the past 400 years of colonial, capitalist and apartheid rule.

The Devil has, however, been increasing the temperature during the so-called democratic dispensation. The black majority has more unemployment and poverty than during the colonial, and apartheid era. Our country has become more unequal than any other, due to economic policies adopted on the eve of the democratic breakthrough which the ANC led alliance has gladly and enthusiastically maintained during the democracy.

Anyone who had thought that Ramaphosa’s government would descend from the Ivory Tower and assess the extent of the deprivation facing the black majority would have been in dreamland.

The poverty, unemployment and inequalities that have pushed our country to the precipice have not moved Mboweni and the ANC tripartite alliance an inch! The speech delivered the same framework presented by Mboweni on the eve of the Covid-19 pandemic. It was a speech like all those delivered by all finance ministers from 1990 right through until today.

Mboweni bragged about South Africa’s “economic strengths: a diverse industrial base, a flexible exchange rate, stable inflation and deep domestic capital markets that allow us to borrow mainly in rands”. This kind of approach reveals how deep his head is, in the sand:

With such a disputable sense of what is good about the South African economy, and with such blind spots now evident, Mboweni’s fixation on what is wrong with the economy – boiling down to public sector debt – is just as misguided.

Mboweni argues: “But debt is our weakness. We have accumulated far too much debt; this downturn will add more. This year, out of every rand that we pay in tax, 21 cents goes to paying the interest on our past debts. This indebtedness condemns us to ever-higher interest rates. If we reduce debt, we will reduce interest rates for everyone and we will unleash investment and growth. So today, with an eye on the future, we set out a strategy to build a bridge to recovery. Our Herculean task is to close the mouth of the Hippopotamus! It is eating our children’s inheritance. We need to stop it now! Our Herculean task is to stabilise debt.”

We have a rebuttal to this mentality, based on our own understanding of history. But first, to again point out Mboweni’s poor grasp of economic reality, he argues that debt is “eating our children’s inheritance,” when in fact, once we are all dead, the debt that is passed from our own generation to the next will be repaid to the next generation’s creditors.

In other words, there is no intergenerational transfer to be concerned about; instead, the class struggles of the future, just as today, will be about whether the next generation of debtors can strengthen their own position against that generation’s creditors. And that, in turn, will require our and future generations to reject the power of financiers.

Currently, the power of the financiers is overwhelming. Among the 50 largest economies, the South African government pays the second-highest interest rate in the world for foreign debt, in part because Treasury and the SA Reserve Bank have allowed so much money to move to the international markets by relaxing exchange controls.

This policy serves the interests of those wanting South Africa to remain “a small and open economy,” as Mboweni puts it. (We would prefer to be a larger and less vulnerable economy.) That smallness, openness and international indebtedness – rising to $185-billion for the economy as a whole by year-end 2019 – leaves the credit-rating agency brothers (Standard & Poor’s, Fitch and Moody’s) with a State Capture influence that the Gupta, Watson and Shaik brothers put together could only dream of.

Mboweni also makes a decision that could be fatal: to put South Africa deeper into foreign debt. He argues: “Our early projection is that gross national debt will be close to R4-trillion, or 81.8% of GDP by the end of this fiscal year. This is compared to an estimate of R3.56-trillion or 65.6% of GDP projected in February 2020. Without external support, these borrowings will almost entirely consume all of our annual domestic saving, leaving no scope for investment or borrowing by anyone else. For this reason, we need to access new sources of funding. The government intends to borrow about$7-billion from international finance institutions to support the pandemic response.”

What he fails to do is acknowledge five vital “devils in the details”:

While irresponsibly ignoring the dangers of business-as-usual Treasury management, the government is focusing so much of his vituperative rhetoric on public debt for a simple reason: He wants to make extreme budget cuts using the Zero-Based Budgeting method, the full manifestations of which are not yet evident because this state is incapacitated to properly carry out this methodology.

We know about Mboweni’s penchant for socially-destructive austerity policies, because even when facing the looming Covid-19 catastrophe in late February 2020, he cut the health budget by nearly R4-billion, and in the prior Budget, he slashed frontline state services in municipalities by more billions. We know he was so disgusted by civil servants that he cut R161-billion in their agreed-upon salaries over the coming three years.

And we also know that Mboweni is so despairing of historical evidence that high debt levels, if invested in public goods, can have returns lasting decades, that he did not even consult his own Treasury’s records. In 2014, the Treasury issued a PowerPoint presentation that included a record of debt over the prior century. 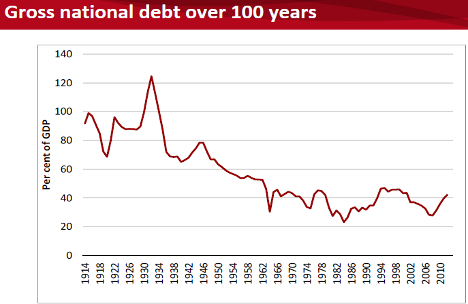 Mboweni dares not look back to history, but the answers are obvious. The South African government dug out of the 1932 debt crisis with several techniques that even if we consider that regime as racist as that of the formal apartheid era, we must learn from.

That era was fortunate that even though politicians ran a state that “saw” the society’s problems through a hateful, racist lens, of course, it did set itself the task of solving the “Poor White Problem” and birthing the SA welfare state. It set out to build infrastructure, especially rail. It established many other State-Owned Enterprises that served vital roles – such as electricity provision and steel manufacture – and expanded the postal service.

This was a period when the country was subject to much lower levels of foreign loans, trade and foreign direct investment, as that era’s globalisation was disrupted by the Great Depression and then World War II. As a result, it was an “import-substitution” period, one which witnessed the birth of South Africa’s broad-based, dependency-reducing manufacturing industry (beyond the existing mining equipment suppliers and some food canners and other light manufacturers).

Because the state-led development and because international markets were far less important than they had been, the economy had a much better balance. The annual average GDP growth rate was 8% from 1932-46, the fastest recorded in modern South African history. The results were good even for black South Africans, as demand for labour rose and the rate of growth of the black-to-white wage share rose more than 50% (from 11-17%; and then the black share stagnated and only hit 21% by 1970).

All this was done with a public debt load about 50% higher in 1932 than it is today, because those in society who had voting influence – especially white workers and farmers – demanded a state-led recovery from the 1929-32 Depression.

Of course, if there is too much borrowing or printing of money – such as occurred in Zimbabwe from the early 1990s onwards – and then the state allows looters to use it for their own personal consumption plus capital flight, then the result will be a catastrophe.

We will not allow that to happen in South Africa, because our working-class institutions of civil society are critical of fat-cat politicians, and we are continually making demands for better public infrastructure, services and investments in our society’s human resources. We showed that by supporting movements that demanded free Aids medicines (which raised life expectancy from 52 in 2005 to 65 today), by demanding Free Basic Services for municipal residents and by demanding that #FeesMustFall (for 90% of tertiary education students who have a free education now).

We are renewing our demands continually, including for basic-income support, non-politicised food parcels and not just emergency healthcare services, but a fully-fledged National Health Insurance to end the current crisis of medical apartheid. We are demanding a fully-fledged just transition to an ecologically-harmonious economy that will create several million jobs, restoring our environment and ending our horrific dependency on fossil fuels.

It is only by spending more – but in the appropriate ways we have often discussed – that we can replicate the successes of the 1930s. Just as John Maynard Keynes was appalled by that era’s neoliberalism, known as “The Treasury View,” and insisted on the “euthanasia of the rentier” because financiers were stifling social progress, we must continually inform our capitalist managers that they are not even doing a repair job in the business sector’s own interest. And we insist on going far beyond Keynes, to a genuine, democratic eco-socialism – a period ahead in which the reactionary, pro-financier values implicit in Treasury’s new Budget would not be tolerated. DM