Rethinking one thing before we ‘rethink everything’

Before rethinking nearly everything, let us think very clearly about one thing. Do we want a world in which we solve extremely difficult problems with politburos, command councils and war rooms, or one in which we reclaim agency for individuals, families, local communities and nimble organisations? If we answer in favour of centralisation, then we can rethink everything all we like and remain firmly stuck in a ditch – a ditch of our own construct.

And who could disagree with such an undertaking?

There is indeed much that needs rethinking. But this will be a comparatively meaningless exercise unless we are able to dislodge the dominant meme that a clique of mediocre technocrats can, while incurring almost no personal cost, manage complex, fluid, multi-scale problems better than a multitude of individuals, families, local communities and nimble organisations.

The Pandemic Data and Analytics (Panda) team, which highlighted the loss of life destined to follow from lockdown, is firmly of the view that extreme inequality is a backdrop against which no country can flourish. Wherever it exists, it is accompanied by devastating societal ills. It has also laboured under highly centralised political cliques which rig the game constantly in their favour to the exclusion of the broader society. No sensible citizens wish that situation to continue. Yet lockdowns added insult to injury, placing poor South Africans in even more bitter circumstances while ruling elites sailed through in spacious homes, collecting guaranteed paychecks funded by the very citizens they were forcing into unemployment.

For someone who wishes to rethink almost everything, Jonas displays a misapprehension of reality when he asserts that “it was not the domestic lockdown that sunk the South African economy”, but the inevitable shockwaves of the global shutdowns. We have been surprised at how widely held this view is. We expected draconian lockdowns to make things far worse, and they duly delivered, far more so than the virus and the consequences of the panic abroad.

This is clear when one looks at the April 2020 service sector activity data (Markit PMI) against the stringency of lockdowns as measured by Oxford University researchers. Not surprisingly, Sweden, despite suffering an epidemic in line with Western Europe’s average, experienced far less of a decline in service sector activity compared to countries with much more stringent lockdowns. 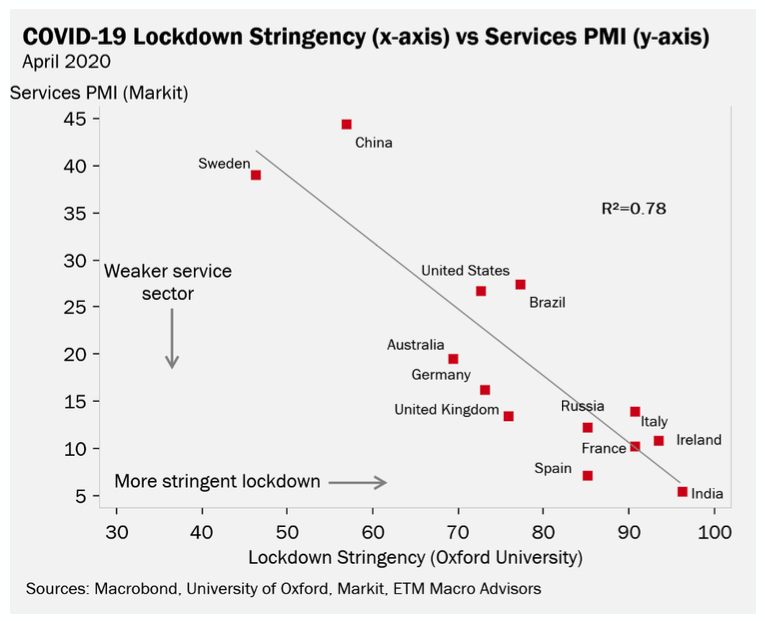 For those whom charts and data leave cold, the explanation for this is simple. Events in foreign countries beyond our control did indeed cause businesses’ revenues to fall, as Jonas points out. But the unprecedented experiment of lockdown caused them in many cases to go to zero, with immense consequences. The consequent institutional destruction and loss of jobs is deep and ongoing with every day of continued lockdown.

We stress this, not to score a point, but because we believe that it has important consequences for policy response.

Our economy needs to grow if these many yards of lost ground are to be recovered and if we are to have any chance of ushering in broader upliftment. Growth is a precious flame and kindling it is no mean task. Almost the entire history of man is a tale of stasis under the grip of restrictive authority. Except for the last few centuries, and, for most of that time only in a few regions, have men orchestrated their affairs in a fashion that frees them from the grip of overbearing overlords, allowing creativity and generativity to reign.

Pernicious authority has taken many forms — tribal, monarchic, clerical, colonial and socialist. A creeping culture of centralisation has turned institutions sclerotic. This has throttled innovation that had previously thrived, and snuffed out the spirit of community that kept local hierarchies fit for purpose and able to provide a real check on excessive centralisation of power. The elites at the top of these national and supernational bureaucracies, corporate and governmental, now prosper at the expense of everyone else, ending a happy and unprecedented period during which poverty, disease and illiteracy had been profoundly in retreat.

The virus has exposed these faultlines in spectacular fashion, highlighting the iniquity of great power concentrated in the hands of the mediocre and inept. It is not the virus, but the response to it, that “rampages through humanity”. A catastrophic and global failure of risk management has turned a modest threat into an enormous one. Where decisions were devolved to a more local level, common sense has prevailed, but exceptionally and generally in smaller polities.

South Africa’s absurdly technocratic response to the virus was replete with jumped-up apparatchiks banning e-commerce, closed-toe shoes and hot pies, and arcane and byzantine risk matrices unmanageable even before their implementation.

This gave us all our first crash course in actual socialism and most of us disliked it. Most that is, except for elites and government employees wallowing in the lush comfort of fiat incomes leeched from the very entrepreneurs and innovators they berate for being on an “investment strike” while the state descends into a fit of policy incoherence. The 2 June 2020 judgement of the North Gauteng High Court in the De Beer case by Judge Norman Davis was aptly scathing, deeming this situation irrational and unconstitutional, and the suppression of hardwon civil liberties callous and arbitrary.

The court ruling might have mentioned “inhumane”. One of the most pitiful and chilling episodes of the lockdown was food distribution from private charities being forcefully stopped and channeled to central state depots for slow, wasteful, politically-favoured distribution. It’s to their credit that some charities refused to abide by this unconscionable directive.

The call for “inclusive economic growth” must not be another wolf in sheep’s clothing — socialism, statism and centralism. If it is, it will fail as it always has.

If it is a call to genuinely decentralise political authority, an appeal to community agency, and a restoration of liberty to the hands of the citizenry, then it will be a great success, calling the lie to the defeatist notion that South Africa is structurally a low-growth nation.

Jonas may be surprised to hear that the Panda team enjoys an energetic, clear-headed debate regarding the universal basic income (UBI) proposal. We might not be shot by any of our colleagues for saying that the idea has merit, with some important provisos. It can plausibly eliminate the demeaning process of means-testing.

If used to displace application of tax revenues by bureaucrats, putting consumption and resource allocation decisions in the hands of the people, who know their needs best, it would represent a move in the right direction and have the potential to eliminate much inefficiency and corruption. But if used as a means to extract more from beleaguered productive classes, it would be a colossal failure. If funded by printing money, it will lead to total societal collapse. UBI can only be entertained as a displacer of centrally directed expenditure, or it will be more of a liability than an asset.

Before rethinking nearly everything, let us think very clearly about one thing. Do we want a world in which we solve extremely difficult problems with politburos, command councils and war rooms, or one in which we reclaim agency for individuals, families, local communities and nimble organisations?

If we answer this question in favour of centralisation, then we can rethink everything all we like and remain firmly stuck in a ditch. A ditch of our own construct.

If we want local, empowering agency again, then we need to think hard about how to get it and how to keep it.

Covid-19 and the draconian lockdowns it spawned are not a sign that countries should prioritise supranational bureaucracies, global stimulus and state-led development. All of these chimeras failed spectacularly in this crisis, as they had for decades leading up to it.

Rather, this regrettable episode shows us precisely why we should want to cultivate political and economic decentralisation — genuine liberty — as a matter of high priority. DM

Russell Lamberti is founder of ETM Macro Advisors and co-author of ‘When Money Destroys Nations’.

Russell Lamberti is founder of ETM Macro Advisors and co-author of ‘When Money Destroys Nations’.