South Africa, once a beacon of innovation in the financial sector infrastructure has lost its lead. It is time to take a serious look at the numbers and face the reality of reinvention to save what is left.

I often wonder whether people in charge look at the numbers. The most recent collective investment schemes data released by the Association for Savings and Investments SA (Asisa) paints a grim picture of South Africa’s savings industry. The data tells a tale of slow decay for domestic listed equities. A once buoyant, deep, and vibrant market has, over the past two decades, halved in the number of listings and reduced to only a handful of mega stocks and a tail of illiquid mid and small-cap counters. The chickens have finally come home to roost and there is nowhere to hide. (Graph 1)

According to Asisa, at 31 March 2020 the size of the domestic unit trust industry fell to R2.26-trillion from R2.38-trillion recorded exactly a year ago; a drop largely expected given the size of the March 2020 Covid-19 sell-off. A deeper peek into the data, however, reveals a savings sector in need of resuscitation. The graph below shows the net unit trust inflows (defined as sales less purchases) for South African funds over the last seven years, which has averaged around R110-billion of annual net inflows. Whilst this number is positive, the real concern is where this money is coming from and where it is going to (graph 2). 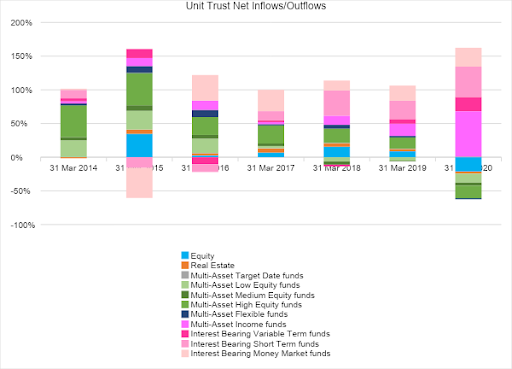 The unit trust industry was established to facilitate retail access to the capital markets for savers outside of the formal pensions market and should therefore largely comprise retail savings. However, institutional investors largely comprising retirement funds and corporates now make up 63% of total unit trust assets whereas just 10 years ago, in 2010, institutional assets made up only 36% of total assets. Retail unit trust market share has steadily declined over the last decade.

The last respectable inflow into domestic equities by unit trust funds was in 2015, represented by the colour blue. This also explains the increase in market share by institutional investors as their interest-bearing allocations are accessed through unit trust portfolios.

It also tells us that members of retirement funds, young and old, have opted to invest their retirement savings into low-risk options, further worsening the already underfunded status of South African retirement funds. On the other hand, corporate investment into interest-bearing funds confirms that many corporates have chosen to park cash rather than invest into the economy.

Multi-asset class funds, represented by the green shades have also, over several years now, on average held overweight exposure towards domestic interest-bearing and offshore securities, magnifying the distress under which the JSE finds itself.

Another danger for listed equities that has been long coming is the global growth in private markets which are seen as a better and easier route to raise capital with the advantages of less public scrutiny, no listing fees and no burden of intensive regulatory reporting. Certainly, in South Africa, investors wary of sub-par returns from listed markets are exhibiting greater appetite for such assets. Then there is the push towards prescribed assets and investment into infrastructure which means that given the declining pool of institutional capital, the budget for this exposure will have to come from the listed markets, another blow to the JSE.

There are currently 287 domestic equity unit trust portfolios totalling just under R293-billion representing 15% of South African collective investment scheme assets and the bulk of these assets are managed by a handful of asset managers and a long tail of funds with sub-optimal assets under management.

This is not sustainable. The traditional asset management model in South Africa was built for scale, and with the changing demand environment and competition for limited capital from all fronts, will need to reinvent its operating model or face further decline.

This is notwithstanding the headwinds it already faces from the growth of low-cost passive equity products. What is more worrying is that the allocations to infrastructure investments may potentially disintermediate the exchange and asset managers from the investment supply chain completely as government and institutions invest directly.

And so, a history of being the primary price-maker coupled with waning investor interest has left South Africa’s primary exchange reeling. The change in regulations to allow for the establishment of competitive exchanges came a tad too late and is unlikely to achieve any real success for the foreseeable future.

The unit trust industry faces a similar trajectory. While the number of registered unit trusts has grown by 50% since 2014 to 1,625 funds, facilitating improved competition and optionality for consumers, we have witnessed over the same period a decline of retail market share, illuminating a savings industry in distress.

South Africa, once a beacon of innovation in financial sector infrastructure, has lost its lead. It is time to take a serious look at the numbers and face the reality of reinvention to save what is left. BM/DM

Vawda is founder and managing director of financial services group 27four, and non-executive director of JSE member stockbroker Legae Peresec. She holds an MSc in Applied Mathematics and has more than 20 years’ experience as a practitioner in the domestic, African and international capital markets.

Fatima Vawda is the founder and Managing Director of 27four Investment Managers. She holds an MSc in Applied Mathematics and has over 21 years experience in financial markets. She has over the years received numerous accolades both domestically and internationally, having most recently won the Ernest & Young World Entrepreneur Southern Africa Emerging Category award. Fatima is an active member of the Association of Black Securities and Investment Professionals and represents the industry body at Nedlac on Financial Sector Policy and is also a member of the Financial Sector Charter Reporting Working Committee.

Fatima Vawda is the founder and Managing Director of 27four Investment Managers. She holds an MSc in Applied Mathematics and has over 21 years experience in financial markets. She has over the years received numerous accolades both domestically and internationally, having most recently won the Ernest & Young World Entrepreneur Southern Africa Emerging Category award. Fatima is an active member of the Association of Black Securities and Investment Professionals and represents the industry body at Nedlac on Financial Sector Policy and is also a member of the Financial Sector Charter Reporting Working Committee.