Covid-19 has caused us to lose perspective on various fronts. One main front is the burden of disease. In a country in which many thousands of people die each year from treatable diseases like TB and Type 2 diabetes, an exclusive focus on the mortal impact of Covid-19, while understandable, is misplaced.

This is not another piece about the epidemiology of Covid-19 by an amateur epidemiologist, but an article about the need to place the pandemic in perspective.

A recently released estimate of possible deaths due to Covid-19 is that up to 48,000 people in South Africa may die from the pandemic by November 2020 (Kahn & Paton, 2020). At the time of writing (24 May 2020), 340,196 people worldwide have died from Covid-19 (Johns Hopkins University Coronavirus Resource Center) – 407 in South Africa. This means, in the worst-case scenario (if 48,000 deaths is worst-case), that the country can anticipate a 47,900 percentage point increase in Covid-19-related deaths over a six-month period – an increase of truly epidemic proportions. 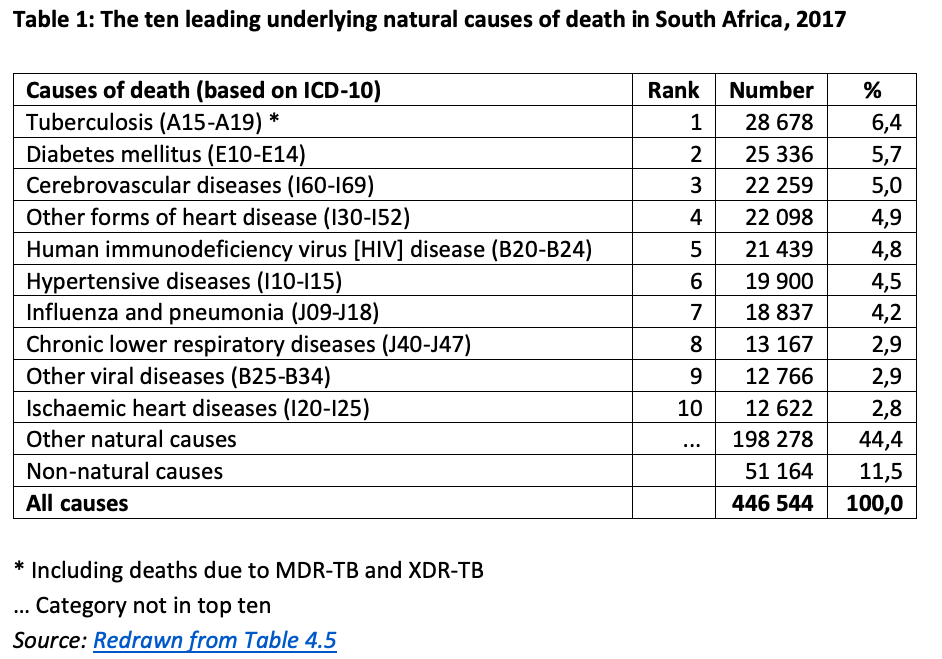 What are the implications of these statistics for how we view the Covid-19 pandemic? Three present themselves.

First, because of its immediacy and its propensity to crowd out other priorities – or at best to colour our frames of reference – Covid-19 has caused us to lose perspective on various fronts. One main front is the burden of disease. In a country in which many thousands of people die each year from treatable diseases like TB and Type 2 diabetes, an exclusive focus on the mortal impact of Covid-19, while understandable, is misplaced.

A recent World Health Organisation (WHO) Information Note cites modelling that predicts that a global reduction of 25% in expected TB detection for three months, because of a focus on Covid-19 testing would issue in a 13% increase in TB deaths – returning the world to TB mortality levels of five years ago.

“Between 2020 and 2025 an additional 1.4 million TB deaths could be registered as a direct consequence of the Covid-19 pandemic,” according to the Information Note.

Given this play-off, the WHO urges health systems to ensure that TB prevention and care continue without any interruption. As past epidemics like influenza and Ebola have shown, the reassignment of personnel and hospital in-patient facilities for patients with serious respiratory complications that accompanies emergency outbreaks of such diseases has compromised TB care. South Africa is no different: a recent NICD report reveals that there has been a large decline in TB testing since the first lockdown was instituted – from an average of 47,520 TB tests per week before lockdown, to an average of 24,574 tests per week during the lockdown – a 48% reduction.

A total of 21,439 people (Table 1) died from underlying HIV disease in South Africa in 2017 (though the number may be considerably higher, as it is estimated by scientists [South African National Burden of Disease Study team] that 93% of Aids deaths in the country are misattributed to other causes). But in a country in which HIV and TB intersect (around 301,000 people developed TB in 2019, nearly 60% of whom were also HIV-infected – Newman, 2020), a higher proportion of the population than might otherwise be the case may manifest with severe symptoms if they contract Covid-19.

Second, while comparing Covid-19 with TB is instructive, comparing it with other diseases broadens our perspective even further. Covid-19 has arrived amidst a “pandemic” we have been living with for some 40 years (Newman, 2020 – though the WHO now classifies HIV as an epidemic) – at the epicentre of which is South Africa. According to the WHO, more than 32 million people worldwide have died of HIV since the early 1980s, and at the end of 2018 about 37.9 million people were living with HIV – albeit that the majority of them have been kept alive by antiretroviral therapy.

The last 700 years have witnessed a number of other pandemics (Newman, 2020): the Black Death, which in the 14th century killed 75 million to 200 million people – and possibly (according to Spyrou, Tukhbatova et al., 2016) half of the entire population of Europe; cholera, which over the past 200 years has reached pandemic proportions seven times and has killed thousands of people; the 1918 Spanish Flu, which infected around 500 million people (about one in three people on earth) and killed around 50 million people worldwide; and severe acute respiratory syndrome (SARS), which infected an estimated 8,000 people (LeDuc & Barry, 2004) in 29 countries and had a mortality rate of about 10% – at this stage higher than that of Covid-19 (Newman, 2020).

And third, the sudden arrival and the swift and ubiquitous spread of Covid-19 has not only focused the mind, but has fixated it on the present moment. Covid-19 colours our vision to the point of framing how we see everything, from events on the world stage to – in the context of lockdown – the most banal everyday events at home.

The loss of perspective the pandemic produces is not confined to the sphere of health, therefore. We are locked in a time warp in which the “distortion of space-time” (Collins English Dictionary) alters our perception of history. While millions have died over the last 700 years from pandemics, millions have also died from – and many more millions have suffered the repercussions of – natural disasters. There is not the space to enumerate these deaths and losses here; but in South Africa, in just short of a 40-year period (1980-2016), there were 89 declared natural disasters (Van Niekerk, Wentink & Shoroma, 2018) killing 2,022 people but affecting more than 21 million.

And in the bigger scheme of things – the kind of historical sweep taken by historians Ian Morris in Why the West rules – for now (2010) and Yuval Noah Harari in Sapiens (2011) – Covid-19 is but a moment in time. This is cold comfort for those living in the midst of a pandemic from which many thousands have died and many more have suffered – and the full trajectory and end-point of which we cannot know. But it does appear that, as for Wordsworth (in The World is Too Much With Us) lamenting the materialism of his age and the lack of synchronicity with nature which it spawned, “For this, for everything, we are out of tune.” DM