Hand washing with soap and water is the primary precautionary measure against contracting Covid-19. But with 10% of South Africa’s population having no access to piped water whatsoever, this leaves nearly six million people vulnerable.

The table below shows the extent of access to piped water (inside the dwelling, inside the yard, or at an access point outside the yard), among the general population in 2016, 21 years into democracy.

Percentage of the population with access to piped water, 1996 vs. 2016, by province: 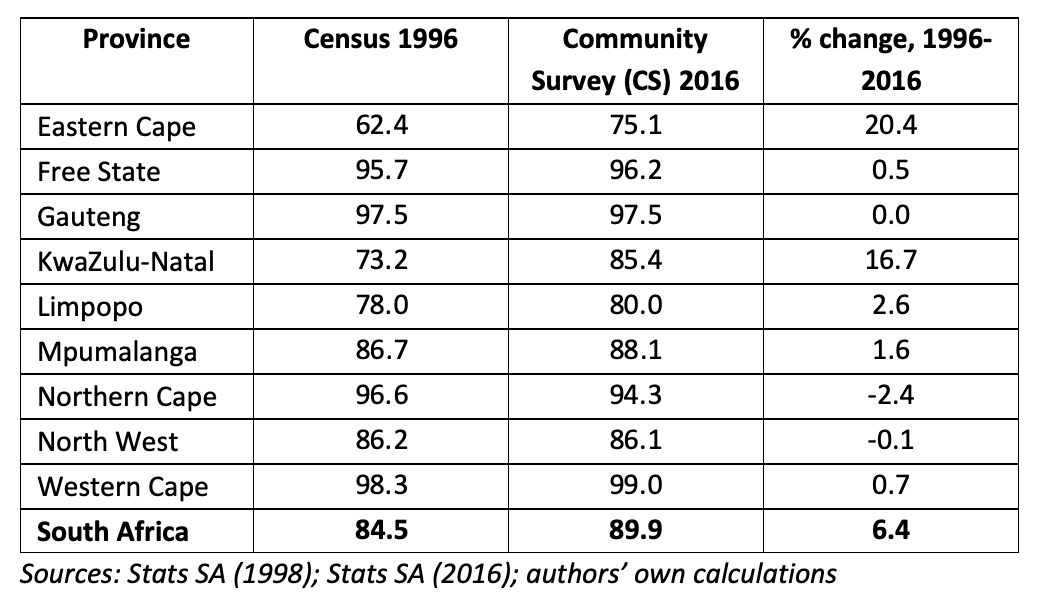 More poignantly still, only 46.3% of households in South Africa had access to piped water in their dwellings in 2018. Provincial statistics, which would have shown the extent of poor access to water in some under-resourced rural provinces, were not published.

Water in the time of a pandemic

The South African government, taking its lead from the World Health Organisation, has published clear guidelines on the importance of washing hands with soap and water to guard against contracting Covid-19. But if hand washing with soap and water is the primary precautionary measure against contracting the virus and 10% of the population has no access to piped water whatsoever, this leaves nearly six million people (Stats SA’s 2019 mid-year population estimate was 58,775,022) particularly vulnerable to this viral infection.

Many of these people live in densely populated, often water-scarce areas, where there is understandably a fear of high levels of infection. This has important implications for household water management and the maintenance of hygiene – particularly given the need for uninterrupted water supply and strong supportive interventions during this pandemic.

The media has reported on further water-related government plans. The Minister of Human Settlements, Water and Sanitation has reportedly identified 2,000 communities nationally that are in need of water support, and by 28 March 2020, her department had procured 19,000 of the 41,000 water tanks which it hoped to have installed before the end of March. The minister was reported as saying that the decision had been taken to “cut the long process of procurement” and go directly to the distributors and manufacturers. “We have been in touch with manufacturers who have said 400,000 tanks are available to procure.”

The bypassing of onerous procurement procedures and the fact that Human Settlements, Water and Sanitation has been able to deliver water to communities that have either never had water or had only poor-quality water points up the cruel irony of service delivery at the time of a pandemic: What has taken years to achieve, and only partially at that, can be achieved when there is political will. But as Dr Jo Barnes, a retired epidemiologist, pointed out to the Sunday Tribune, water provision cannot be undertaken overnight, especially in the midst of a health crisis. Water reticulation systems take time to design and develop; what remains to be seen is whether the water authorities will undertake this in the wake of the Covid-19 pandemic.

The other irony of the government provision of water during the Covid-19 pandemic is that the water is intended for the washing of hands. Samuel Taylor Coleridge in The rime of the ancient mariner intoned:

Will there be water for the poor to drink once their hands have been washed? Or will the government revert to washing its hands of the poor? DM