South Africa’s ranking in the top half of 2019’s Human Freedom Index conceals the fact that its score is dominated by personal freedom, while economic freedom lags behind. Besides corruption and the electricity crisis, this is the main reason our economic indicators remain so bleak.

The World Bank recently cut South Africa’s economic growth forecast for 2020 to below 1%, on the back of electricity supply concerns. This is significantly lower than both Treasury and the SA Reserve Bank officially anticipate, and would extend sub-1% growth for the third year running. It hasn’t been above 2% since early in 2015 and hasn’t seen 3% since late 2013. The low growth since 2015 is unprecedented since 1994, with the exception of two short-lived blips in 1998 and 2008/9.

Although the global growth outlook is subdued, South Africa cannot blame it on global economic conditions. Its GDP growth rate is far lower than the 2019 average of 1.4% for emerging markets and developing economies, as estimated by the International Monetary Fund (IMF). It is lower even than the IMF’s 2019 growth rate estimate for advanced economies, which, led by robust growth in the US, stands at 1.9%.

External debt as a percentage of gross national income was the second-lowest of the BRICS countries at below 20% in 2000 and remained below 30% until 2011. By 2016, it was the highest of all the BRICS countries, at more than 50%.

Unemployment, exceeding 29% by the narrow definition, has reached highs last seen in 2003, as population growth continues to outpace job growth. Manufacturing output growth has been negative for six months leading up to November 2019, has been stagnant since 2013 and has yet to recover to pre-2008 levels. Investment growth in the economy has been largely flat, or declining since 2013.

South Africa has plummeted down the rankings in the World Bank’s Ease of Doing Business Report, from 28th in 2006 to 82nd in 2019. President Cyril Ramaphosa has promised to return South Africa to 50th place, although that hardly seems ambitious given that we only dropped below 50th in 2016.

Ramaphosa this month applauded the country for improving its ranking in the World Economic Forum’s Global Competitiveness Report 2019, from 67th in 2018 to 60th in 2019. It’s better than a punch in the face, but 60th is still lower than SA’s ranking for every year up to and including 2016. In 2007, South Africa was in a different league at 35th.

There are some obvious headline reasons for the economic crisis in which South Africa finds itself. The catastrophic collapse of Eskom and stage four cancer of corruption are key among them.

A broader underlying reason, however, and one that will not resolve itself by fixing Eskom and reining in corruption, is South Africa’s lack of economic freedom.

Its ranking in the Human Freedom Index 2019 (HFI), co-published by the Cato Institute, the Fraser Institute and the Friedrich Naumann Foundation for Freedom, in collaboration with the Institute of Economic Analysis and the Visio Institut (sic), demonstrates the problem.

The report combines measures of economic freedom with measures of personal freedom, to construct an overall freedom index. Each is made up of many indicators, grouped into larger categories.

Personal freedom reflects the rule of law as well as safety and security. In addition, it measures specific freedoms such as freedom of movement, freedom of religion, freedom of association, assembly and civil society, freedom of expression and information, and freedom of identity and relationships.

Notably, all of the improvement in South Africa’s ranking since 2008, from 88th to 64th, can be attributed to increased personal freedoms. The country’s economic freedom score has been largely stagnant, varying within a narrow range.

Among personal freedoms, the only measure that significantly declined over the period was political pressure on and control over the media, which went from a score of seven out of 10 in 2008 to five out of 10 in 2017.

Read together with the WEF’s Competitiveness Index, we can easily identify key areas in which South Africa can and should do better.

The two reports agree that safety and security significantly hamper the country’s economy. In terms of security, South Africa ranks 135th out of 141 countries in the WEF’s report, and its scores have been declining. The business cost of crime is also the indicator with the lowest score in the HFI report, closely by the weakness of the legal system in addressing crime, the unreliability of police and the difficulty of enforcing contracts.

Other areas in which South Africa comes up short in the HFI report include government consumption, government enterprises, the top marginal tax rate, the freedom to own foreign currency, regulatory trade barriers, movement of capital and people, and business regulations.

The Competitiveness Index ranks South Africa 101st out of 141 on the burden of government regulation and it’s getting worse. The WEF also ranks South Africa very low in terms of government ensuring policy stability (108th), and the government’s responsiveness to change (110th). It notes that the country is declining in terms of its infrastructure, with the biggest problems involving train services, electricity and drinking water.

South Africa is one of the cheapest places in the world to start a business (4th out of 141), but it also takes incredibly long (129th out of 141). Its labour market flexibility ranks among the worst in the world (111th), and it’s getting worse.

Conditions in the South African product market also comes in for WEF criticism. It highlights, in particular, the distortive effect of taxes and subsidies on competition (80th), the extent of market dominance (74th), the prevalence of non-tariff trade barriers (88th), trade tariffs (90th) and complexity of tariffs (94%).

The skills situation in South Africa is dire. Almost all the indicators, except the extent of staff training and the size of the future workforce, are declining. This includes mean years of schooling (60th), critical thinking in teaching (95th), the pupil to teacher ratio in primary education (109th), quality of vocational training (119th), skillset of graduates (102nd), digital skills among the economically active population (126th), and the ease of finding skilled employees (98th).

The WEF competitiveness indicators in which South Africa performs well are almost all located in the private sector, such as the banking system, entrepreneurial culture, innovation, research and development, and corporate governance.

The HFI report found that income is correlated with a high degree of human freedom. The top quartile of most-free countries had an average per capita income of more than $40,000, much higher than incomes in the bottom three-quarters of between $9,000 and $16,000. Surprisingly, the degree of overall freedom in less free countries did not correlate well with income. The lowest quartile had a higher income than the second and third quartiles. 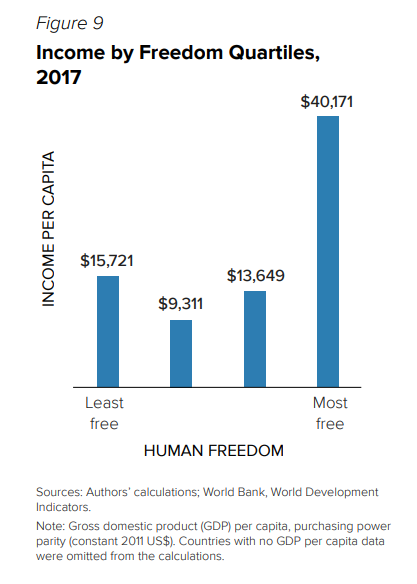 This stands in stark contrast to the strong correlation between income and economic freedom alone, as demonstrated in the Fraser Institute’s Economic Freedom of the World: 2019 Annual Report. 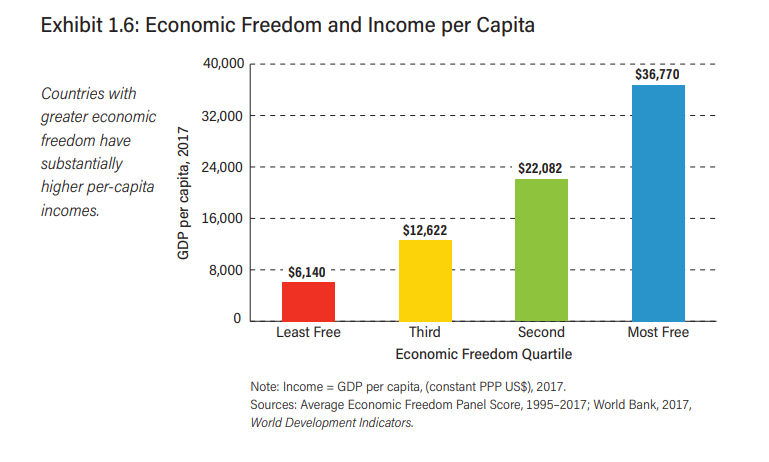 To arrest South Africa’s economic stagnation and decline, government policy needs to change on many levels. Not content with having destroyed almost every state-owned enterprise from Eskom on down, the government now wants to take over the healthcare industry, and most recently, all sports, clubs and gyms in the country. This idea that government can run things better than the private sector lies at the core of its economic malaise.

Instead of expanding the scope of government, it should focus on doing less, but being better at what it does do.

Fixing education by holding teachers accountable for their outcomes, against world-class educational standards, would be a great start. It can easily draw on market forces to help, by allowing parents to choose where their children go to school, and subsidising poor parents by means of a voucher system.

Instead of just mouthing pleasantries about cutting red tape, which it has been doing for decades, the government should make real work of reducing the regulatory burden, taxes and barriers to trade. Perhaps institute a new rule: for every new regulation published, two must be repealed. Simplify the tax code so mere mortals can actually understand it. Slash tariffs and subsidies to make both imports and exports less expensive.

Make work of bringing the government bureaucracy into the 21st century. People want to interact with their government online, instead of queuing multiple times at physical offices during work hours, just to obtain a silly document giving them permission to do this, that or the other. Half the time, they shouldn’t need permission in the first place, but when they do, make it quick and painless to obtain it.

Reduce the power of the unions. They represent only their members, not the rest of South Africa. In particular, they do not represent the unemployed and actively campaign against the interests of those who do not have a job.

As long as the unions call the shots in the labour market, employers will hire as few people as they can get away with. Without robust economic growth, wages cannot keep rising and business cannot expand to enlarge the economic pie.

Government should focus on the big issues: Education, crime, corruption, electricity and water. The private sector, given the freedom to do so, will take care of the rest.

South Africa cannot afford “state-led growth”. The state is only leading us off an economic cliff. All the evidence shows that a country like South Africa can only thrive through freedom from the state. Let us escape the shackles of bureaucracy and authoritarianism, and demand the personal and economic freedoms that should be our fundamental human rights. DM