Trophy hunting: No place for forced removals in wildlife conservation

Ross Harvey, writing for the Conservation Action Trust, demonstrates why SADC countries are right to believe animal rights groups care more about animals than about African people. He advocates forced population removals by militarised eco-warriors, but worries about the morality of hunting.

In November 2019, I wrote a column explaining why animal rights groups should be kicked out of the Convention on the International Trade in Endangered Species (CITES), if the treaty is to be saved.

The countries of the Southern African Development Community (SADC) have been crystal clear on the matter: by their opposition to the principle of sustainable use in conservation (read: hunting), animal rights groups from the rich world are dismissing the views of range state countries that actually have charismatic animals to protect.

Two weeks ago, the Conservation Action Trust, a South African animal rights group, published an opinion piece by Ross Harvey in these pages. In it, he declares that trophy hunting, as advocated for by SADC range states, “may entrench a Western narrative of supremacy underpinned by chauvinistic, colonialist and crudely utilitarian anthropocentric attitudes”.

So African countries are colonising themselves, now?

The SADC declaration at the close of the most recent CITES conference included this paragraph:

“This anti-sustainable use and anti-trade ideology now dominates decisions made by many states who are party to CITES. States are increasingly influenced by the dominance both at meetings of the decision-making structures of CITES and in their run-up by protectionist NGOs whose ideological position has no basis in science or experience and is not shared in any way by the Member States of SADC and their people.”

But the Conservation Action Trust will have none of it. Harvey acknowledges the science that trophy hunting bans imperil biodiversity, but he agrees with a response that policy should be based not only on science, but also on emotion. And his emotions, it seems, trump the views of millions of Africans.

He’d have us believe that unlike hunting, telling Africans what to think and how to manage their affairs do not “entrench a Western narrative of supremacy underpinned by chauvinistic, colonialist attitudes”.

Perhaps the uppity SADC representatives should have asked his permission before threatening to withdraw from CITES because they were sick of Westerners telling them what to do.

In his headline and opening paragraph, he invokes the sixth extinction, disappearing birds, and disappearing biodiversity, as if they are somehow caused or made worse by trophy hunting. They aren’t.

The narrative of a “sixth mass extinction” is not only wildly exaggerated, as was the recent paper about disappearing birds, but extinctions are largely caused by habitat loss, not trophy hunting.

“Morally, the idea of hunting any species faced with plausible extinction is intuitively disturbing,” he writes. But it isn’t, and intuition isn’t science.

In 1965, game in South Africa was practically extinct outside its national parks. While domesticated livestock numbers increased by a factor of 4.5 during the 20th century, the number of game halved.

Since the advent of the private game ranching industry in the 1970s and the law that established private game ownership in 1991, numerous species have been brought back from the brink of extinction, and game numbers — contrary to what happened in East and West Africa — began to rise again.

When I was a kid, in the 1970s and 1980s, we used to visit Kruger often as a family. I recall vividly how rare sightings of big antelope such as roan and sable were. Even today, South Africa’s National Parks support fewer than 500 sable antelope, fewer than 200 roan antelope and only about 1,000 bontebok. All are more rare than black rhino, which number 1,382 on state land.

The private game ranching industry has bred these species right out of trouble, however. Today, private ranches, reserves or farms host 4,500 sable, 2,300 roan and more than 7,000 bontebok.

In some cases, private game ranches account for 90% of the total population of wildlife species.

Elsewhere, African species that are critically endangered or extinct in the wild, like the scimitar-horned oryx, the addax and the dama gazelle, roam the Texas plains in their hundreds, entirely supported by hunting revenue.

Harvey claims that trophy hunters consist “largely” of “Western individuals”. In South Africa, at least, that is far from true. Foreign hunters account for only 18% of the game ranching industry’s total revenue. Local hunters account for 54%. By contrast, eco-tourism, which is often proposed as an alternative by animal rights groups, accounts for only 5% of total revenue. 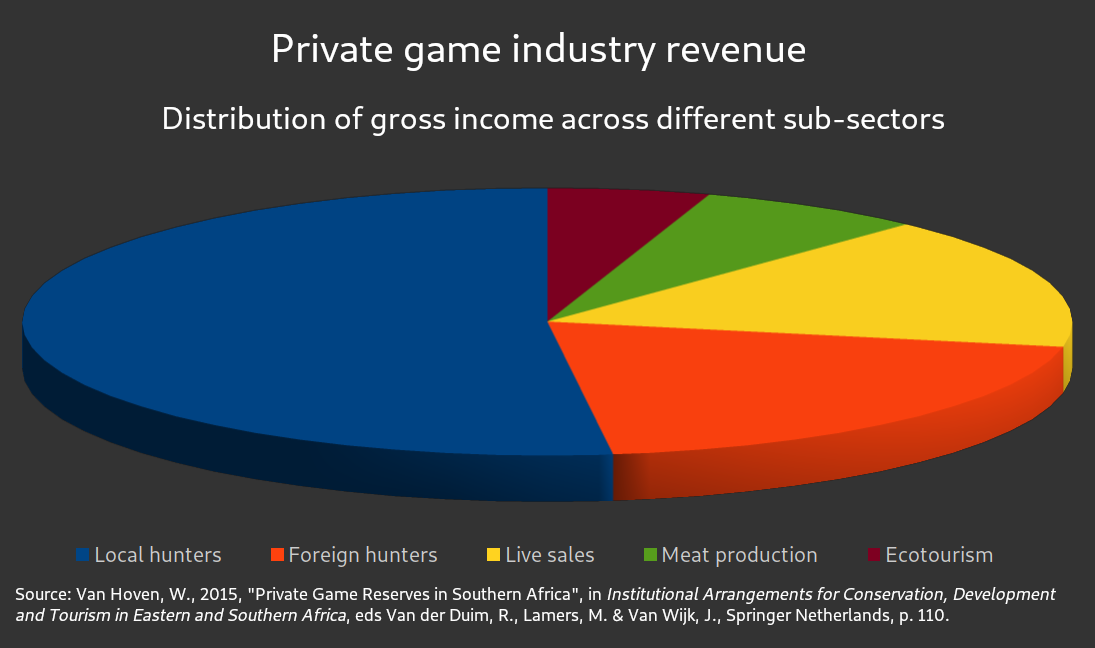 The reason for this is simple. The vast majority of game ranches are not in scenic locations on the beaten tourist track. The few that are well-positioned to profit from eco-tourism likely already do so. Some operate as dual-purpose facilities, supporting eco-tourism, but making the majority of their revenue from hunting parties, and ensuring that the twain never meet. Many others couldn’t hope to attract the hundreds of photographic tourists it would take to make up for the fees paid by a single big game hunter.

Harvey mentions the experience of declining elephant numbers in the Selous Game Reserve, but both he and the source he cites conflate hunting with poaching, and never offer data to support which is the actual threat to game populations. They mention “rampant corruption”, without explaining why they then lay the blame at the door of trophy hunters.

Nor do they address the fact that hunting alone is not necessarily the complete answer. South Africa’s game numbers only took off once private property rights in game were established. Unlike in Tanzania, most hunting in South Africa is not subject to quotas set by the government. It is controlled by private ranch owners, who each know best how to manage their own game.

They also ignore contradictory evidence, such as the Bubye Valley Conservancy in Zimbabwe, which was converted from a barren cattle ranch to a thriving reserve supporting all of the Big Five, funded exclusively by trophy and meat hunting.

Many more private game ranches and reserves depend for a large part of their income on trophy hunting. With only a small share of revenue coming from ecotourism, the idea of prohibiting hunting would be so counterproductive as to be ridiculous.

Harvey says trophy hunting is typically defended under a “consequentialist moral framework”. That is, because the outcomes are expected to be good for society and wildlife, it is deemed morally acceptable. Then he says “the failure of consequentialism lies in its inability to omnisciently predict the collective outcome with any degree of computing accuracy”.

It seems weird to admit positive outcomes, yet complain that you can’t perfectly predict them. Besides, the consequences of prohibiting hunting are very well documented. Kenya lost more than 80% of its wildlife since banning hunting in 1977.

Paolo Strampelli is a postgraduate conservation biologist with an aversion to hunting, works in southern Tanzania, specialising in large carnivore conservation. He explains that banning hunting, as advocated by animal rights idealists, will have dire consequences for Africa’s wildlife.

“As a conservation biologist, while I of course care about the welfare of individuals, the main priority for me will always have to be the long-term survival of the population,” he writes in an article republished by Africa Geographic. “Both myself and other fellow conservation biologists that have spent time on the ground learning about the issue, and who share these views, care deeply about wildlife. Our main interest is try and ensure that policy decisions help provide these threatened populations with the best long-term chance of survival. We have seen what happens when wildlife has no value: millions of acres of wild land can be lost in the space of a few years; within months, farms and cattle take the place of wildlife which has been there since the dawn of man. More lions can be poisoned or killed in retaliation for livestock losses in one location in a month than are killed through trophy hunting across the whole country in one year.”

No wonder Harvey doesn’t like consequentialist morality. The consequences of his emotional and anti-scientific views, were they to be imposed on African wildlife range states, would indeed be terrible.

Unless… well, unless we hear about the alternatives to trophy hunting that Harvey says do exist, and for which he says “global funding for their replication and scaling is now necessary”.

He doesn’t tell us what those alternatives are, beyond linking to an article, presumably in the hope that we’d simply accept it’s true without checking. What he concealed is that the cited article actually advocates “green militarisation and human population displacement”.

Harvey and the Conservation Action Trust demonstrate that SADC countries are right to believe that animal rights lobby groups care more about animals than they do about African people.

For them to lecture Africans about morality is despicable. Remind me again, why do they have a voice at CITES? Why should anyone listen to their ideology of neo-colonial oppression and misanthropic totalitarianism? DM