Gabriel Crouse is a writer at the Institute of Race Relations.

South Africa’s fastest-growing job category in the second quarter of 2019 was that of “manager”, both in relative and absolute terms, according to StatsSA. Year on year, 112,000 new jobs were added, bringing the total number of managers to more than 1.5 million. That looks like good news – but overall employment numbers remain negative relative to population growth, while the biggest recent job shedding hit low-skilled “elementary workers”.

In the first quarter of 2019, the second-worst period in the last decade for net job cuts, “construction” jobs reduced by 142,000. Only a small fraction have been recovered since.

Global Justice Fellow at Yale and Fellow at Columbia University, James S Henry finds that at least 1.7-million workers in SA are at “high risk” of automotive replacement. These are mostly in lower-skilled jobs such as shop clerks, switchboard operators, and manual jobs where machines can take over the work of muscles.

These are just more signs that, for those lucky few who start out, a couple of rungs up, there is still hope to climb the ragged South African ladder, while most unskilled youth tread air. Youth unemployment is over 55%.

In November 2018, President Cyril Ramaphosa signed the National Minimum Wage Bill. This mandates the process to stop employers from hiring anyone at less than R3,500 per month for full-time work. Is the law banning cheap labour, not yet fully implemented, going to make things even worse for desperate unemployed youth?

Finance minister Tito Mboweni thinks so, as his much-discussed policy recommendations include halting the national minimum wage implementation. This, in turn, is widely reported as “the one thing” Mboweni asked for that he will not get. Nedlac, long Ramaphosa’s baby, is said to have the lungs to shout it down.

The traditional view on minimum wages is that they are good for a narrowing labour aristocracy (think of those managers), but hard on anyone whose labour is worth less than the legal minimum. Imagine a youth who finds a job at R2,000 a month. She can hope to add value, subsist, learn and one day do better – a route espoused in South Korean ambassador JD Park’s book, Re-inventing Africa’s Development.

But not if the law is implemented, for then she will just as easily be fired. Or she and her employer will contract illegally, making it harder for her to get protection from actual abuse. Ramaphosa’s “new dawn” law might be the sunset to her working life, her above-board legality, or both.

South Africa’s labour academics have long argued that it is more complicated than that, if only you look deep into the statistics of other countries. When it comes to minimum wages, the UK changed the debate fundamentally.

The South African government’s National Minimum Wage Panel Report to then-Deputy President Ramaphosa (November 2016) listed the UK first among five countries whose “recent minimum wage experience… has generally been positive”. Under “learning from other countries”, the panel report notes “the approach we find most appropriate for South Africa is based on the UK”.

Interest in the UK’s minimum wage is deserved. In 1998, former prime minister Tony Blair’s Labour Party introduced a national minimum wage in the face of howls, protests and dire warnings about job cuts to come.

So, a country can have a minimum wage, the UK proved; it can even have one that grows faster than the “median” while reducing unemployment. “Median” is the key term to understanding how this works.

If one hundred people were standing in a row from highest- to lowest-income earners, the person in the middle is earning the “median” income. In 1999, the UK took that person’s income and halved it. Thus, it found a minimum wage near the end of the line that worked.

Russia (another popular one for SA academics to role model) was even more austere. In 2005, its minimum wage was so low only 0.9% of men and 1.3% of women were “at risk” of falling below it. The Russian state metaphorically went to the second last person in the 100-person line, looked at her and said – you move up one place to here, second-to-last place, very good; the other 99% of earners not being directly affected by the very low minimum.

There are two reasons for taking this Russian/UK approach of going long past the median towards the end of the line before establishing a legal minimum. First, if a new national minimum wage is put in as high as the median point, overnight half of the entire workforce is made unlawful, by definition. In SA that would mean over eight million illegal workers.

According to Ramaphosa’s panel report, European countries range their minimum-to-median ratios around the UK’s, from 0.37 to 0.61, which makes sense, given the above. At the lower extreme, in emerging countries such as Estonia and the Czech Republic, the minimum is nearly three times less than the median, or, to put it another way, the state has taken a more Russian route, going almost right to the back of the line before drawing the minimum wage point. The more underdeveloped a country, the less it can afford to cut off the bottom rungs of the income ladder. France, on the other hand, is very rich and can afford a minimum-to-median ratio of 0.61.

If South Africa were to follow Estonia’s steps in terms of the minimum-to-median ratio, Ramaphosa would have set the minimum just above R1,000 per month. Shocking as that sounds to the trade union elites, that would put us in line with Nigeria. Muhammadu Buhari’s government recently insisted that hiking the national minimum wage up to 30,000 Naira (R1 250) would be far too decadent and destructive for Nigeria at this time.

Alternatively, if SA were to follow in the UK’s 1999 much-praised minimum-to-median footsteps, that would put the minimum near R1,500. If it were to follow the UK’s current rate, closer to France’s, the minimum would be just above R2,000. But South Africa is exceptional in every way. So the 2018 National Wage Bill ushered by Ramaphosa since at least 2016 did the unthinkable and made the minimum wage equal to the median wage. 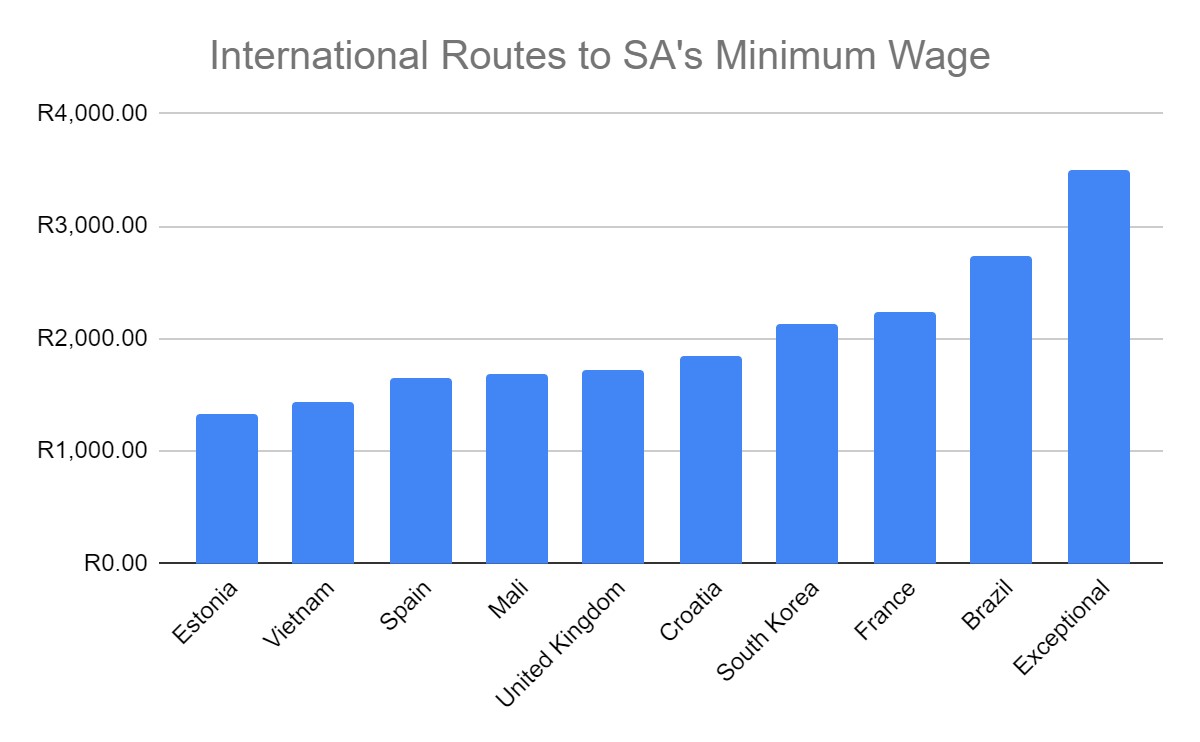 The chart above indicates what the national minimum wage would be if we imposed similar minimum-to-median ratios to those other countries listed.

Rendering half the country’s employees illegal overnight is drastic. However, Brazil’s minimum-to-median ratio would imply a R2,800-a-month level, which is not so far off the one we now have. Indeed, the Ramaphosa panel includes Brazil as a major role model even though Uruguay (with a much lower ratio) is globally recognised to have better labour laws and enforcement (and less income inequality).

What goes unnoticed in the SA literature is that the key to Brazil’s success in this regard has been not enforcing its own laws. The International Labour Organisation (ILO) indicates a non-compliance rate of 20% (before Jair Bolsonaro’s election), meaning Brazil’s nominal minimum wage rate misrepresents reality on the ground.

To find a country that outdoes Brazil and has actually, like South Africa, decided to make its minimum wage roughly equal to the median, one must turn to Indonesia and Turkey. The secret to their success is, again, not enforcing the impossible law. Both Turkey and Indonesia have 50% non-compliance rates, according to the ILO. The minimum wage is a law hardly observed unless an official is looking to extract a bribe.

Meanwhile, the big difference between Indonesia and South Africa that somehow escaped mention in all domestic policy discussions at Ramaphosa’s Nedlac is that Indonesia’s unemployment rate is 5%. South Africa’s is 29%. 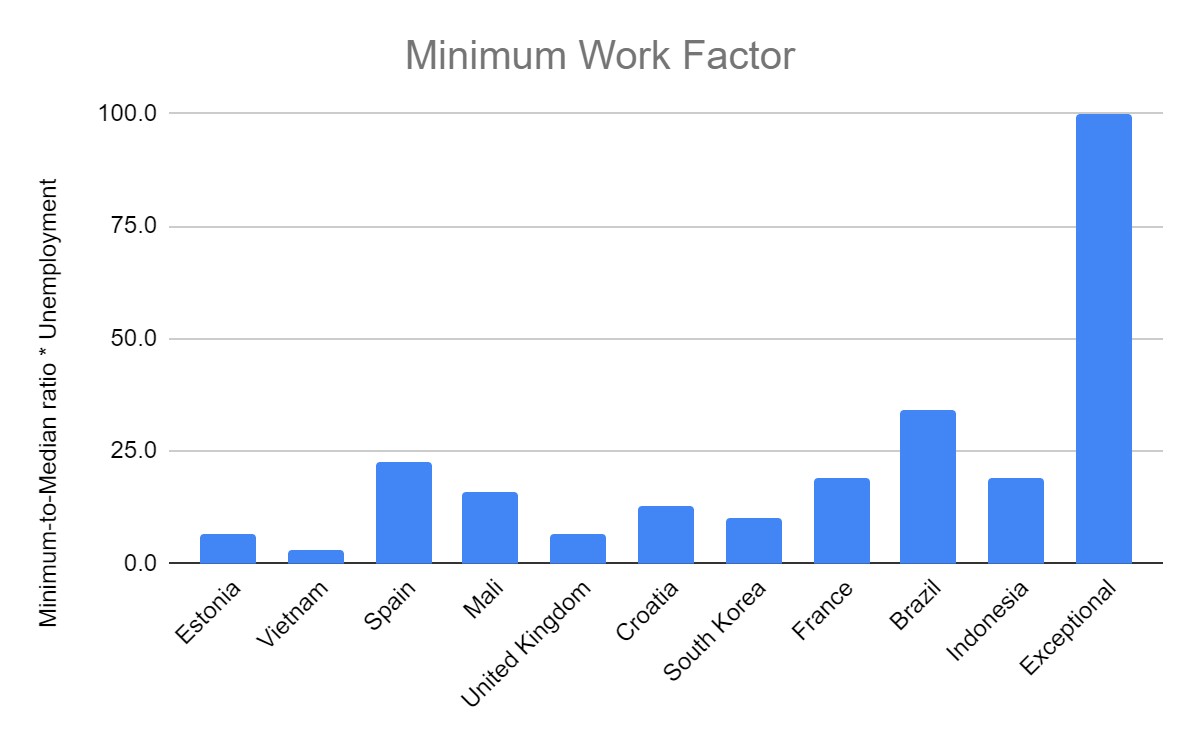 The chart above indicates the minimum-to-median ratio multiplied by the unemployment rate, scaled for RSA = 100.

This establishes the novel work-less factor which quantifies the extent to which the state is willing to risk keeping people out of work in order to meet a “social” target such as reduced wage inequality through the imposition of a high minimum wage. It answers the question: to what extent is the minimum wage set high in spite of the unemployed?

South Africa is nominally the world’s most work-less country. Must it stay this way? Before Ramaphosa’s national minimum wage, the ILO already ranked SA third behind Indonesia and Turkey for worst compliance rates. All that has changed with the new law is the ease with which one can compute non-compliance in SA as we take eight million daily steps towards even more lawlessness.

Half the workforce is illegal on one side, and half the youth workless on the other. These daily illegal steps of toil on the former side are no crime except that they add insufficient value for the state to call such work “decent”. DM

Gabriel Crouse is a writer and analyst at the Institute of Race Relations.