Why we need more economists

The solution is not to get rid of free markets, but rather to redesign institutions. And to get that right, we don’t need fewer economists — we need more.

In a recent commentary in The New York Times, Binyamin Appelbaum placed the blame for increasing inequality in the US squarely at the feet of economists. He cited the work, among others, of the Nobel laureate economist Robert Lucas, who directed policymakers’ attention toward the problem of growth and away from redistribution. Appelbaum also cited statistics on life expectancy in the US, which has fallen in recent years, owing partly to higher rates of drug abuse and suicide among economically disadvantaged groups.

But economists have not ignored the problem of inequality – far from it. Inequality has become a central research area in economics over the past decade, and has entered the public discourse in the US because of penetrating work like that of Princeton’s Anne Case and Nobel laureate economist Angus Deaton. Moreover, there has been an increasing collaboration between economists and other researchers from both the social and physical sciences – an approach I actively support through my involvement with the Rebuilding Macroeconomics project at the National Institute of Economic and Social Research in the United Kingdom.

The economics profession should not be so defensive in the face of criticism like Appelbaum’s. Economists are not omniscient, of course. But insights from the dismal science – and in particular the advocacy of market-based policies to boost prosperity – have proven their worth many times over.

When I began working in the field of macroeconomics in the 1980s, the discipline was still dominated by Keynesian models. The questions we addressed then are now coming back into fashion: What causes business cycles? Is there a trade-off between unemployment and inflation? How can we design economic policies to improve the performance of the economy and prevent recessions?

But in the two decades from the late 1980s to the Great Recession of 2008, macroeconomists shifted their focus away from business cycles and toward economic growth. And the influence of University of Chicago-based economists like Lucas was an important reason for that shift.

I still recall the whispers at the summer meetings of the US National Bureau of Economic Research in the mid-1980s that “Lucas is working on development.” This was unthinkable at the time: mathematical economists and economic theorists ruled the roost, and development economics was well down the pecking order of respectable fields.

Yet in a remarkable 1988 article, Lucas stressed the importance of understanding why the economies of Hong Kong, Singapore, South Korea, and Taiwan had, by the 1980s, far outperformed others that had been at a similar stage of development two or three decades earlier.

“The consequences for human welfare involved in questions like these are simply staggering,” Lucas wrote. “Once one starts to think about them, it is hard to think about anything else.” That 1988 paper was instrumental in altering the research aspirations of several subsequent cohorts of young economists.

Although I do not always see eye to eye with my Chicago colleagues, they were right to advocate market-based policies as a means of stimulating growth. Markets are not perfect, but a system that rewards people differentially for their insights and efforts is more effective than any other known form of social organisation at pulling human beings out of poverty – as illustrated by the chart below from Max Roser and Esteban Ortiz-Ospina at the University of Oxford. A rising tide really does lift all boats. 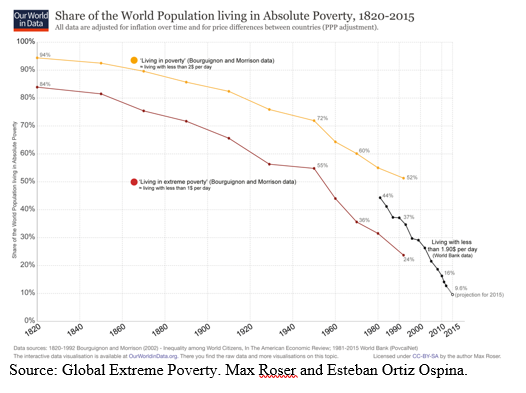 If reducing inequality were the overriding priority, then perhaps the answer would be to move away from capitalist market economies and toward socialist or communist systems.

As Karl Marx argued: “From each according to his ability, to each according to his needs.” But that approach was tried in the 20th century, notably in the Soviet Union and in China under Mao Zedong, and the outcome in both cases was appalling. To blame inequality and other problems arising from rapid globalisation on the institution of the market could lead to a step backward.

Market capitalism was also thought to be doomed in the early 20th century, owing to the kind of crushing inequality resurfacing today. Yet reports of its demise, like those of Mark Twain’s, were greatly exaggerated. Markets’ resilience reflects their remarkable effectiveness at solving apparently intractable social problems. But they operate within political and institutional constraints that evolve as policymakers learn from their mistakes.

For example, the deregulation of capital markets in the 1980s went too far. True, deregulation resulted in massive gains and, on balance, reduced inequality rather than increasing it. But those gains went to urban elites in the West and to rural peasants in China and India. As I argue in my book, Prosperity for All, there is surely a better institutional design that can preserve two centuries of democratic progress.

The solution is not to get rid of free markets, but rather to redesign institutions. And to get that right, we don’t need fewer economists; we need more. BM