Twenty-five years since democracy, how has SA’s agric...

Twenty-five years since democracy, how has SA’s agricultural sector performed?

South African agriculture has progressed markedly over the past 25 years and exports have reached record levels. But how far transformation has gone remains unclear. Organised agriculture and government need to craft a common vision for the sector with clear rules of the game, and monitoring systems.

We can have different views about the agricultural policies that government has adopted since the dawn of democracy, but the one thing we can all agree on, I hope, is that the sector has grown tremendously – as illustrated in Figure 1. Importantly, this expansion was not driven by a few sectors but has been widespread – livestock, horticulture and field crops.

Of course, the production of some crops has declined over time, most notably wheat, and sorghum. This, however, had a lot to do with changes in agro-ecological conditions and market falling demand in the case of sorghum, not policies. 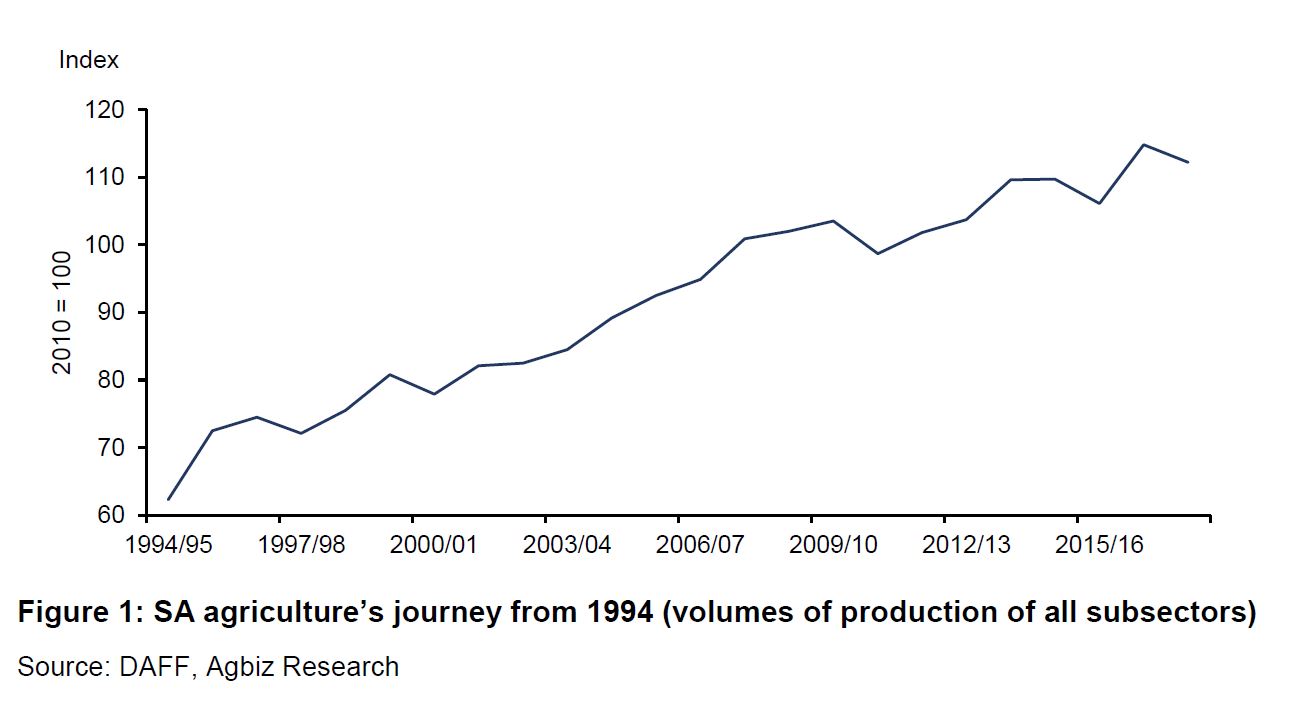 This uptick in production has been underpinned, largely, by the adoption of new production technologies, better farming skills, and growing demand (locally and globally), and progressive trade policy.

This was made possible by a range of trading agreements that government secured over the past couple of years, with the most important ones being the African, European and Asian regions. Africa and Europe now account for about two-thirds of South Africa’s agricultural exports. Asia is also an important market for South Africa’s agricultural exports, demanding a 25% export share in 2018.

The agricultural subsectors that have largely enjoyed these signs of progress in exports are horticulture (and wine), and grains. South Africa now exports roughly 49% of its agricultural products in value terms. In 2018, South Africa’s agricultural exports reached $10.6-billion, a record level.

The increase in agricultural output is the reason South Africa is now ranked 45th out of 113 countries in the Global Food Security Index, making it the only African country within the top 50. I do recognise, however, that boasting about this ranking when millions of South Africans go to bed hungry every day is contradictory, as has been pointed out to me after a few presentations where I cited these statistics.

We must remember that the Global Food Security Index balances the four elements (affordability and availability, as well as quality and safety) to arrive at a rating and covers matters at a broad national level. In this regard, South Africa produces enough food to fill the shelves of supermarkets with high-quality products, but still has a long way to go in addressing household food insecurity as many households cannot afford the food that is available in a way that meets their nutritional demands. This is a topic for another day.

Encouraging as this agricultural progress story is, some may ask whether the gains we’ve seen in agricultural production over the past two decades have been widely shared across different cohorts of farmers in South Africa.

There are no easy answers to this, as we lack data on the entry-level of black farmers to agriculture in South Africa (and progress), as I have noted in an essay for The Citizen newspaper here. Likewise, even the existing sector has seen consolidation and corporatisation, which means that the number of farmers in the sector has decreased. However, statistics may not paint the full picture as the professionalisation of the sector has also led to more formal employment opportunities being created for qualified persons as family farms have somewhat been replaced by professional agribusinesses with line managers.

But, what we can also not ignore is the anecdotal evidence pointing to an increase in black farmers in some corners of South Africa. We see this in field crops, horticulture and livestock. I have in the past pointed out the rise of black grain farmers in the Eastern Cape (you can read the post here).

So, as we continue on this agricultural journey, let’s always be cognisant of the progress South Africa has made in boosting our agricultural fortunes (see Figure 1). And in the quest to grow and be more inclusive, be forever vigilant of the unintended consequences of the policies we seek to implement. Equally, we must never be complacent with the dualism that we continue to see in South Africa’s agricultural sector.

The task, then, is how to grow South Africa’s agricultural sector in a more inclusive and transformative manner.

This, I think, will need both the private sector (organised agriculture groups and agribusinesses, etc) and government to craft a common vision for the sector with clear rules of the game and monitoring systems. This can build on the work of the National Development Plan (chapter six to be specific), and other progressive programmes and policies that are available to the nation. BM