Demonisation of 5G mobile networks is rooted in technophobia

The premier of Poland, Mateusz Morawiecki, reportedly added his signature to a petition to stop the rollout of fifth-generation (5G) mobile networks. The reports were false. He didn’t, because it’s technophobic nonsense. Every generation of technology induces paroxysms of fear among those who do not understand it.

A significant percentage of the world’s population is instinctively afraid of new technologies. In high school, I was taught that barcodes represent the Name of the Beast, and the three spacers actually stand for 666. Eventually, we’d all get barcodes printed on our skin in order to make payments, but if we resisted assimilation by the evil corporations of Mammon, we’d go to heaven. (According to Wikipedia, this myth appears to originate with The New Money System 666, a 1982 book by a wingnut named Mary Stewart Relfe. Here’s its source from 1999.)

This generation is no different. Anything new is intimidating. Anything new might have unintended consequences. And that’s exactly what’s happening with fifth-generation (5G) mobile network technology. With each new generation, old and discredited fears about the alleged harmful effects of electromagnetic radiation are dusted off, dressed up as something new, and trotted out in campaigns to get the new technology banned.

The signatory list on an International Appeal to Stop 5G on Earth and in Space reads mostly as one might expect. Among the 100,000 signatures, there are assorted environmentalists, wellness merchants of the new-age, holistic health and naturopathic variety, and lobby groups for a multitude of unrelated causes. There’s hardly a credible name among them.

Among the initial signatories listed, the “signatory for South Africa” is Lauraine Margaret Helen Vivian, an “honourary research associate” (whatever that means) at the University of Copenhagen in Denmark. Her PhD is in anthropology and psychiatry (and not physics or medicine or radiology or oncology). She has published an entire book, Psychiatric Disorder in amaXhosa Men Following Circumcision, based on observations of only five men. I’m not clear quite what qualifications she has to opine on the subject of 5G, or more pertinently, what authority she has to sign anything “for South Africa”.

A week or so ago, a Canadian website selling weed and esoteric bullshit reported a recent addition to the list of signatories: Mateusz Morawiecki, representing the Chancellery of the Prime Minister of Poland. The article was written by Julian Rose, a minor British hereditary noble fellow known for his advocacy of organic farming. It soon spread to other conspiracy websites such as CounterPunch.

So, what does the august premier know that nobody else does? Nothing, it turns out. A few days later, the very same Sir Julian reported that the Polish government had denied claims that its premier signed any such appeal against 5G. He sounds pretty upset about it. Unfortunately, if you Google “Morawiecki 5G”, all you get is the original fake news.

What is 5G, and why are so many people afraid of it?

In essence, 5G uses higher frequencies, which allows it to transmit at higher speeds, but over shorter distances than previous network technologies. It is ideally suited for the multitude of devices that are coming online as part of the Internet of Things. Effective data rates should be three or four times what 4G can deliver, and it handles a high density of devices in a small area much better than existing technologies.

Fearmongers are up in arms about the higher frequencies and more numerous base stations. They worry that we’ll be saturated with electromagnetic radiation, and that will give us any or all of a very long list of symptoms, ranging from “impacts on general well-being” to cancer and miscarriages.

The higher frequencies of 5G are no cause for alarm, however. The highest frequency I’ve seen licensed for 5G technology is 71GHz. That places squarely in the region of radar on the electromagnetic spectrum. As can be seen in the chart below, it is four orders of magnitude lower than the lowest frequency of ionising radiation, that is, waves with enough energy to knock electrons out of atoms and cause actual molecular damage. All that non-ionising radiation can conceivably do is transfer heat, although it takes a lot of concentrated power (think infrared lamps or microwave ovens) to make effective use of this property. 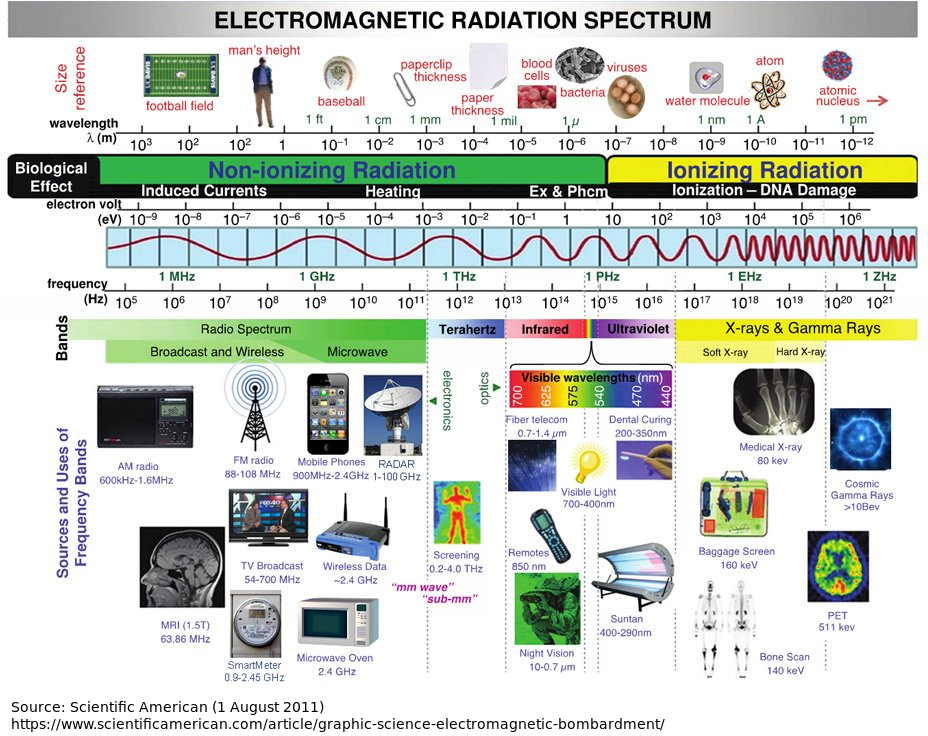 The opponents of 5G argue that the basic physics of electromagnetic radiation is “obsolete”, and that “hundreds of scientists” have proven potential health effects from non-thermal effects. In support of this claim, they cite self-published, non-peer-reviewed reports like this that have been widely criticised.

The petition text also goes after satellites. This suggests that its authors have never come across the inverse square law of radiation. This says that the intensity of an electromagnetic field is inversely proportional to the square of the distance from its source. While your handset might plausibly emit enough radiation to affect your body, this is implausible by the time you get as far away as a typical Wi-Fi router, let alone a cellular base station or a satellite.

There’s considerable irony in the fact that people who worry about electromagnetic radiation lobby against the establishment of new base stations. In fact, because your handset varies its power output depending on the distance to the tower, you want more base stations, not fewer, if you want to be exposed to less radiation.

Many of the academic studies cited in the petition are decades old, and nothing has come of follow-up studies to confirm or quantify the effect. Some weren’t peer-reviewed. Many are published in obscure journals. Most are conducted on animals, or even just cells in a petri dish, not humans in plausible exposure scenarios. Many have very small sample sizes. Most cases involve a correlation, rather than proof of causation. None offer a plausible mechanism of action by which electromagnetic radiation can produce the claimed effects.

Sometimes, the evidence is blatantly manipulated. Witness this oft-cited study, conducted by the US National Toxicology Programme. The headline blares: “National Toxicology Program Finds Cell Phone Radiation Causes Cancer”. In reality, it found no such thing. It found “some evidence” that particular tumours in the hearts of lab rats (which are extremely rare in humans) were associated with electromagnetic radiation.

First, they used rats and mice, not humans. Second, they put them in “reverberation chambers”, which sounds much like microwave ovens. Third, they used only five animals per treatment group. Fourth, they failed to explain why this particular tumour was associated with electromagnetic radiation, but no others were, which suggests chance may have played a role. Fifth, they failed to explain why the positive findings involved male rats, but not female rats. And sixth, most damningly, the results were presented to an “expert panel”, which promptly upgraded the results dramatically. “No evidence” became “equivocal”. “Equivocal” became “some evidence”. “Some evidence” became “clear evidence”. Thus is evidence created out of thin air.

Some people complain of “electromagnetic hypersensitivity”, which allegedly causes all manner of ailments. A review of the science, however, leads to the conclusion that the condition is “unrelated to the presence of EMF”. As if hinting at its true cause, the review was published in the journal Psychosomatic Medicine.

The US National Cancer Institute has published an overview of all the major studies that have been conducted (as opposed to cherry-picking those that suit their agenda), as well as the opinions of expert bodies. It has no motive to play down cancer or any other risk due to electromagnetic radiation. The overwhelming conclusion is that there is no significant association between mobile phone use and cancer or any other health risk.

Of particular interest are the studies that analyse cancer incidence data. If electromagnetic radiation causes cancer, and billions of people who did not use mobile phones 30 years ago now do so, surely this should show up in the cancer incidence rates? It should, but it doesn’t.

“The most consistent health risk associated with cell phone use is distracted driving and vehicle accidents,” the institute concludes.

The World Health Organisation, whose own cancer research agency has classified cellphone radiation as a “possible carcinogen” (simply because it hasn’t been proven that it isn’t), declares:

“In the area of biological effects and medical applications of non-ionising radiation approximately 25,000 articles have been published over the past 30 years. Despite the feeling of some people that more research needs to be done, scientific knowledge in this area is now more extensive than for most chemicals. Based on a recent in-depth review of the scientific literature, the WHO concluded that current evidence does not confirm the existence of any health consequences from exposure to low level electromagnetic fields.”

It makes a good point. Scientists know an astonishing amount about radiation, at all frequency ranges. They successfully wield even ionising radiation to conduct scans and cure cancer. It’s not like the deployment of 5G is an uncontrolled human experiment with unfathomable outcomes, as our petition writers would have you believe.

Opponents of new technology often cite the “precautionary principle”. Although it has been enshrined in law in Europe, this principle is thoroughly anti-scientific. It precludes action or strictly regulates new technologies whenever there is a possible risk, even if the evidence to support such a risk is only speculative and the cost of regulation is high. The onus, then, is on the promoters of the technology to prove that the risk does not exist.

The problem is it isn’t logically possible to prove a negative. You can prove that risk exists, but not that it doesn’t. Besides, those who oppose technology routinely dismiss any evidence advanced by the promoters of technology.

The anti-5G petition, for example, dismisses both government and industry research on the grounds of “conflicts of interest”. In fact, it engages in classic conspiracy rhetoric: the few brave scientists who are not conflicted are allegedly “excluded” from the regulatory process (and presumably not because their work is dubious).

As with all the scares that preceded it, the fear of 5G is nothing more than good old-fashioned technophobia, mixed with the sort of sentiment that seeks to blame all ills on the greed of corporations or the callous disregard and collusion of government. There is no scientific basis for believing that 5G will unleash a plague of diseases and turn us all into mutant zombies. Bring on the future. DM