Gautrain: Political patronage profiteering is back with a vengeance

When the Gautrain was launched in 2010, it enjoyed a ‘patronage guarantee’ of R360-million a year paid by the Gauteng provincial government. Oh, for the days when everything was cheap. That payment has now ballooned to an astonishing R1.5-billion a year, while ridership dwindles.

The Gautrain, the light rail network connecting OR Tambo International Airport with stations in Johannesburg, Midrand and Pretoria, is in trouble. Ridership has declined lately, which required the Gauteng Provincial Government to pay the operator, the Bombela Concession Company, some R1.54-billion for 2018. This is an increase of 12% from the previous year’s sum of R1.36-billion, and a staggering 317% increase over the R360-million Gauteng agreed to pay a year at the start of operations in 2010.

The rich fee paid to Bombela relates to a “patronage guarantee”, which guarantees the Gautrain a “minimum required total revenue”. If it does not reach this revenue, the government coughs up to make up the difference. If this were a fictional deal, it would seem too crazy to be true.

The Gautrain Management Agency (GMA) is a public entity that oversees the concession agreement between the Gauteng Provincial Government and Bombela. In its first annual report published in 2011, it did not mention the patronage guarantee at all.

In its second annual report, it was not quantified. Although one might expect rising passenger numbers and rising revenue to reduce the Gautrain’s reliance on the patronage guarantee, it did no such thing. By 2013, it was finally disclosed, having already risen to a staggering R830-million. Each year thereafter, the patronage guarantee rose further, “notwithstanding the increased demand”. 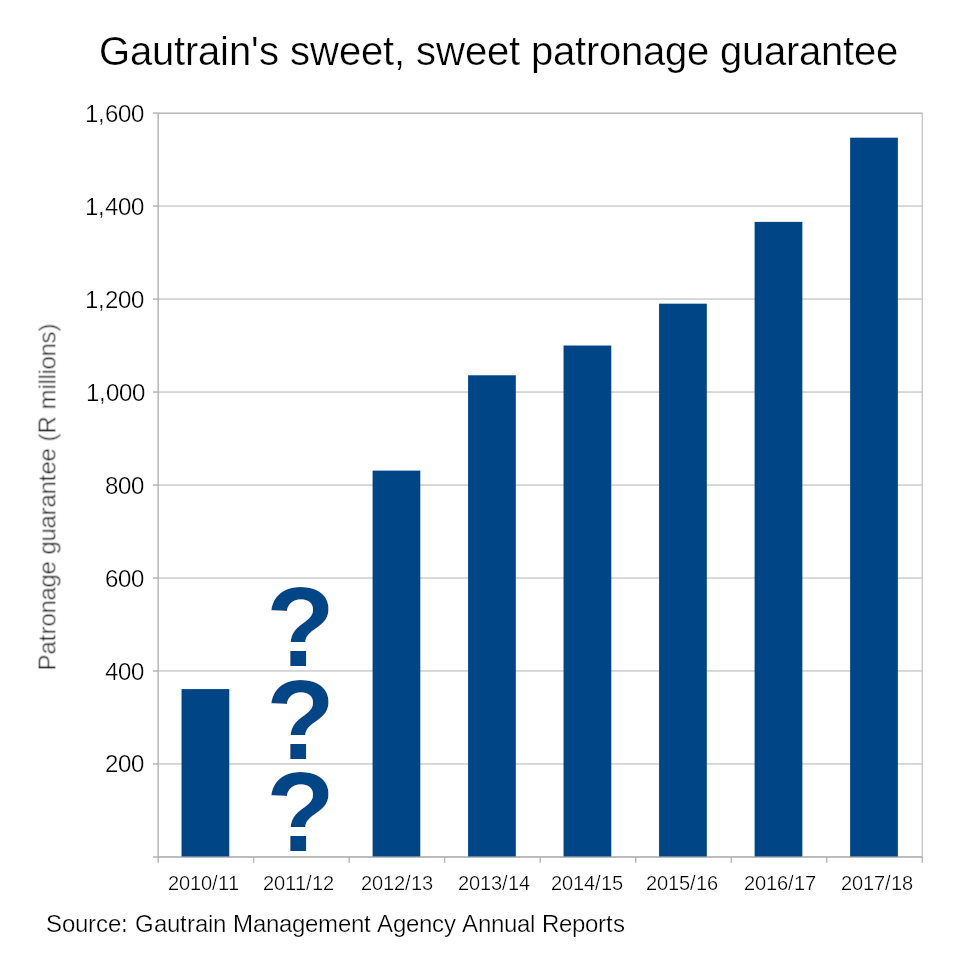 Gautrain ridership declined in 2018, signalling the end of the early growth phase. Gautrain head honcho Jack van der Merwe told eNCA that lack of capacity during peak time which caused congestion on platforms, violent rivalry between metered taxis and e-hailing services at train stations, the inability of the Gauteng provincial government to use e-tolls to punish motorists for driving instead of riding trains, and the country’s weak economy are to blame. 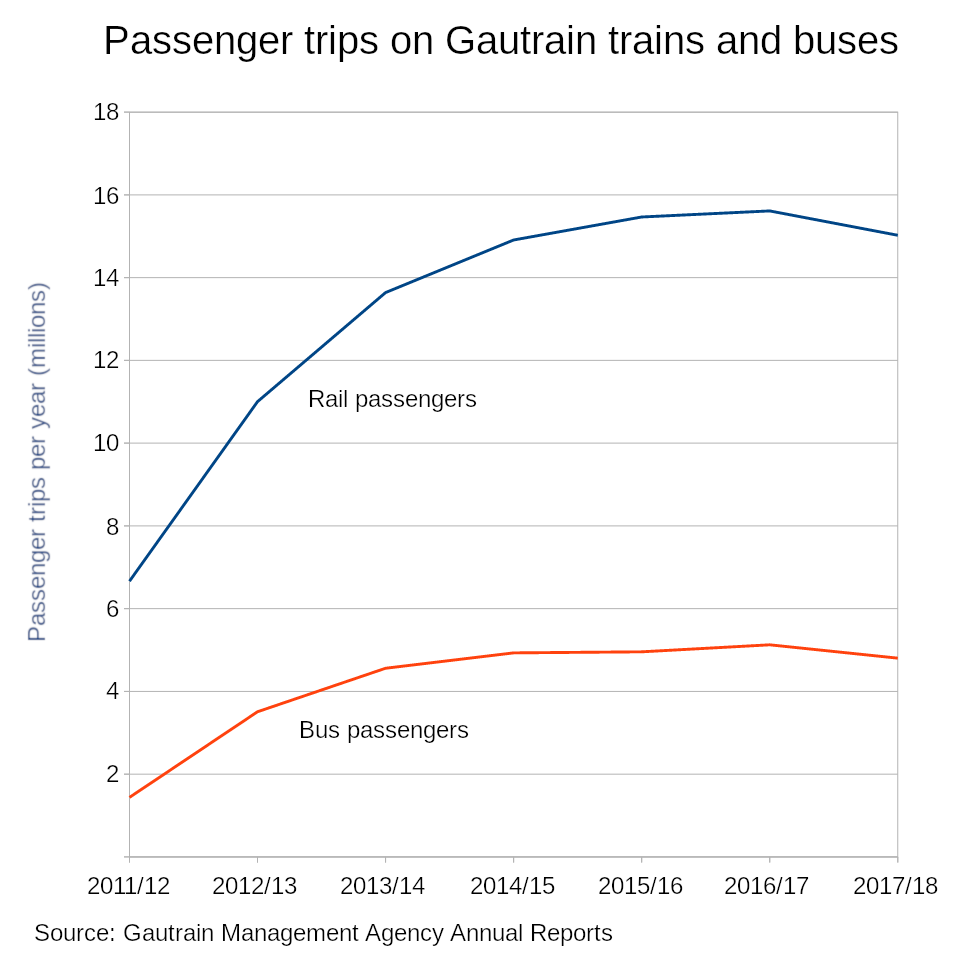 Only days later, Engineering News reported that Van der Merwe is pleased with the operation of the rail system. While eNCA declared the future of the Gautrain to be in jeopardy, Van der Merwe is presently awaiting National Treasury authorisation to expand the 80km system by 150km, which would nearly triple its current reach.

Despite the ambitious expansion plans, the massive annual subsidy the Gautrain receives makes a mockery of a 2007 presentation by Van der Merwe, in which he said public-private partnerships (PPPs) allow the government to “expand its spending on infrastructure without increasing the burden on the fiscus.”

As a non-listed company, Bombela does not publish its annual reports. It is impossible, therefore, to verify how much lucre it’s swimming in. However, the GMA’s numbers are sobering.

Revenue, although dismal, had steadily climbed from R340-million in 2011 to R410-million by 2017. In 2018, however, it collapsed to R266-million, the lowest revenue in the Gautrain’s history. But hey, who cares when you have a pre-arranged deal with the government to bail you out?

Expenditure went through the roof in 2014, after the GMA took over the assets of the Gautrain system in 2013. Because it, instead of Bombela, now had to carry the cost of asset depreciation, expenditure rose from about R300-million to about R1.5-billion a year. Since 2015, the GMA has run at a consistent annual deficit of between R1-billion and R1.2-billion.

So much for not increasing the burden on the fiscus.

PPPs are supposed to make it easier to finance, build and operate large public infrastructure products. In return for a share of the profits, the private partner is supposed to assume some of the risk of financing, constructing or operating the project. In the case of operating the Gautrain, however, the private partner carries very little risk indeed. It cannot lose. As long as it runs trains more or less on time, the financial operating risk lies entirely with Gauteng taxpayers.

This is why I described the Gautrain PPP as political patronage profiteering back in 2011. Even at R360-million a year, which now seems like chump change, this was an astonishingly bad deal for taxpayers, and an astonishingly good deal for the partners in Bombela, including Murray & Roberts, BEE partner SPG Concessions, the J&J Group, and French transport company RATP Dev.

Although the patronage guarantee does incentivise the operator to run the service to high-performance levels, the Gautrain’s own annual reports concede that it offers “limited incentive” to maximise revenue from running the system.

This is a perverse incentive. It allows the company to keep ticket prices artificially low — which undercuts hard-working private-sector transport operators trying to make an honest buck by providing a service most passengers seem to prefer. It also allows it to keep train stations undeveloped, without the bustling commerce usually associated with public transport hubs.

Besides the massive annual payment from Gauteng to Bombela, the project has also been dogged by the inevitable allegations of bribery and corruption that attend every large government tender.

Not being bound by the laws that apply to the rest of us, the Gautrain also inherited the government’s power to levy fines, which it is prepared to use to ruin your credit record if you so much as take a photo or drink a sip of water on its property. It is an authoritarian, loss-making cesspit, and an object lesson in how not to do PPPs.

My early cynicism about the Gautrain, when I knew about the R25-billion the government poured into its construction, but not about the patronage guarantee, annoyed a great number of people who were wined, dined and blinded by the razzmatazz at the glitzy launch party in 2010. It is still a fun read today, and it has turned out to be entirely justified. This is what happens when you don’t ask the hard questions in advance.

To his credit, Jeremy Cronin, then deputy minister of transport under Jeff Radebe, and a member of the parliamentary portfolio committee on transport, did ask the hard questions at the time. He got no answers, he told the media.

Now we know the answer. In a splendid example of large-scale crony-capitalism, the government takes billions from the hardworking citizens of Gauteng, most of whom do not use the Gautrain and many of whom compete against it, and gives that money to a private company to ensure tasty profits. What a sweet, sweet deal if you can bribe your way to getting it. DM