Since the dawn of medicine, quacks have bamboozled victims with sales pitches that sound profound and cutting-edge, but are nothing more than buzzwords designed to deceive. Recently, I found a new one: quantum testing.

The hand-written blackboard outside the naturopath shop lured would-be customers with probiotics, kombucha, and apple cider vinegar (with mother, which is the mix of fungus and bacteria that cause the fermentation). At the top of the list, however, were the words that attracted my attention: “Quantum Testing”. 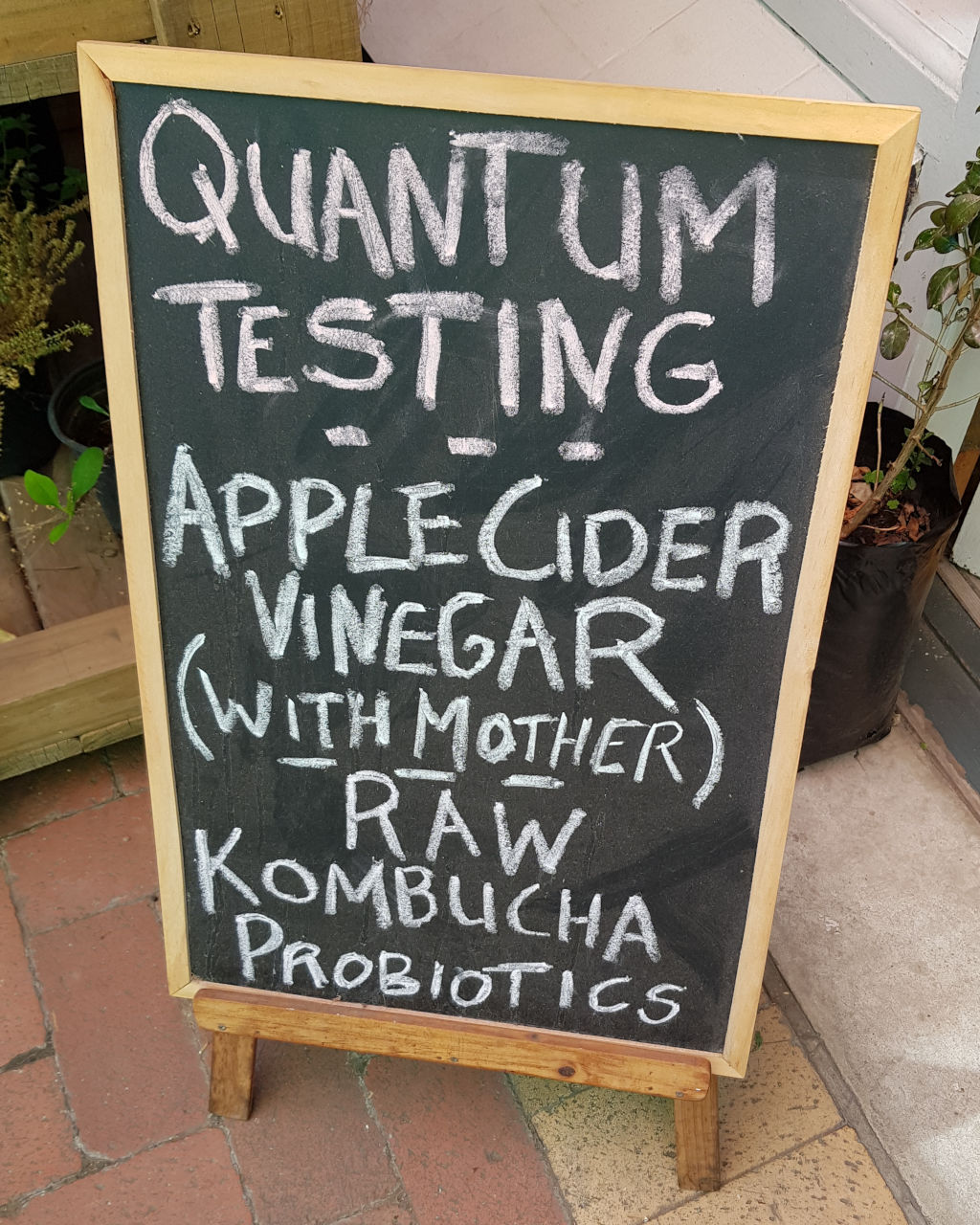 Presumably, not all passers-by know that there is no particle accelerator hidden in the back of the shop, or that quantum physics has no connection, whatsoever, to medical diagnosis or therapy. The sign was obviously aimed at that less educated and more gullible market.

It turns out that quantum healing is a thing. A completely bogus charlatan kind of thing, invented by the guru of bullshit, Deepak Chopra, but a thing nonetheless. It’s also known as “biofeedback” or “energetic medicine”.

The only “Xeroid” known to dictionaries, urban or otherwise, refers to employees of the Xerox Corporation. It’s utter nonsense. The rest of the fancy-sounding terms are just meant to sound impressive. It’s scientific, people! It’s technical! It uses quantum energy!

A promotional page for such devices, hosted by the Institute of Bioenergetic and Informational Healthcare, reads like a sarcastic parody.

So no matter what disease you have, or what you believe in, the quantum energy machine has you covered. It can do literally anything and everything. Note how “traditional medical” is buried there between all the mystical woo-woo claptrap.

“The EPFX QXCI / SCIO is closer to radionics [another alternative medicine pseudoscience which made its inventor stinking rich] than anything else, and apparently has little bearing on electrical measurement or treatment. It works by entering data into a screen, which is fed into the EPFX QXCI / SCIO’s weighted random number generator which in turn displays results. When it comes round to therapy, buttons are clicked on a screen with little evidence of programming beyond the graphical displays on the QXCI saying it is treating.”

This hopelessly ungrammatical paragraph says the device does nothing but turn random inputs into random outputs, which is quite the admission by those who promote its use as a diagnostic or therapeutic tool.

“The QXCI / SCIO system contains a random event generator which acts as the interface between consciousness and the computer system. As long as the client is truly open to the capabilities of the QXCI / SCIO, meaningful results can be obtained.”

So, if you’re gullible enough, you’ll think the machine actually does something useful, when in fact it doesn’t do anything except generate random numbers.

“However, studies have also shown that the outcome of random number experiments can be either positive or negative, often independently of the clients desire to produce a particular result in either direction.”

No, really? You mean if I flip a coin or roll some dice, I might not even know whether or not I have cancer?

“This is perhaps where the need for the EPFX QXCI / SCIO-type device came from – to provide a confidence bridge for new people – but it has also caused a lot of the controversy as people discover it may not work as claimed.”

They’re totally transparent about the confidence job, yet people still believe them.

The devices are really a sales gimmick used to dress up the ancient myth of qi, chi, or prana, which in Indian and Chinese medicine represents the life force or energy flow of a living body. Chopra has his roots in Ayurvedic medicine, which is pseudoscience (although it is actually taught by universities that teach witchcraft and wizardry).

The idea that some mystical energy controls the body’s well-being, binds us to a universal consciousness, or some such claptrap, is used in many other pseudoscientific or bogus practices such as feng shui and acupuncture.

Some say that qi is the force that makes up and binds together all things in the universe. “It is paradoxically both everything and nothing,” they muse, meaninglessly.

Physics, of course, would beg to differ. There is a vast amount of empirical and theoretical evidence for the existence of four basic forces, or interactions, between particles. They are gravity, electromagnetism, and the strong and weak nuclear forces, which operate on a sub-atomic scale. None of these is in any way comparable to qi, or a life-force.

Quantum energy devices are hocus-pocus, designed to defraud the stupid, the gullible, and the desperate. They exploit the fact that quantum physics is hard to understand even when you’re a quantum physicist. The word “quantum” is used because “magic” doesn’t sound quite so scientific.

The claims of quantum testing and healing are not only a wholesale fraud which ought to be illegal on the face of it, but they have real-world consequences.

Consider this heartbreaking post on the Epilepsy Foundation Community Forum, by the mother of a five-year-old. She is being swindled by some guy who “worked with NASA on the research and usage of the machine”. She is ready to take her epileptic child off his medicine to try out this miracle cure, but is afraid.

After several encouraging comments, we find the first warning that the “doctor” sounds like a fraud. NASA hardly has the budget to send things to space. It doesn’t have the time or money to work on magical quantum healing devices that have nothing to do with aeronautics or space.

Only in the tenth comment down is the idea actually debunked, referring the mother to the Quack Watch website, which covers electro-diagnostic devices in general, and the QXCI and its inventor in particular.

Originally known as Dr William Nelson, he/she appears to be a first-class liar and swindler, now known as Professor of Medicine Desiré Dubounet. The claims in her bio are pretty astonishing. She claims to have been nominated several times for Nobel Prizes in both medicine and economics, and claims to have worked as an international lawyer, professor of medicine, quantum biologist, award-winning movie maker, TV star, actress, singer, pin-up girl, songwriter, scientist “and more”. The latter, jobs too mundane to mention, include having worked as an electrical engineer on the Apollo project, being the most published naturopath in history, and having been instrumental in breaking up the ultra-rich paedophile gangs headed by Marc Dutroux. Who wouldn’t believe her?

“Bogus devices like the Quantum Xrroid can cause three types of harm,” wrote Stephen Barrett, a real medical doctor, for Quack Watch.

“1. Patients who become alarmed about improper diagnoses can wind up having unnecessary tests to rule out the presence of these conditions.

“2. Failure to diagnose actual diseases can lead to delay in getting appropriate treatment.

“3. The phony diagnosis and treatment can result in unnecessary expense.”

Those who defend alternative medicine quackery peddled by naturopaths and other frauds by saying, “Where’s the harm?”, are mistaken.

Very real harm comes to those who don’t get scientific treatment for life-threatening diseases such as cancer. Real harm comes to people who stop taking medication for conditions such as epilepsy or diabetes, or take their children off prescribed medication. And even just those who spend hard-earned money enriching frauds and swindlers, to get no benefit at all, are harmed.

Any quack who sells made-up medical miracle machines to uneducated, gullible or desperate people should be jailed for fraud. There’s no such thing as “quantum testing”.

* There is another device called “SCIO”, which is sold as a near-infrared spectrometer. It claims to analyse the spectrum of light reflected off the surface of an object in order to analyse its chemical composition. This is, of course, impossible, but that didn’t stop the gullible editors at Time magazine from running a fluff piece trumpeting the ability of the handheld device to tell you the calories, fats, carbohydrates and proteins in food, as well as the freshness, quality, ripeness and spoilage of food. It’s a scam, folks. Bloomberg did a video insert along similar lines, saying it could identifiy medicine and distinguish real pills from fakes, and do chemical analyses of hair, urine, and saliva. Oddly, for an infrared device, the light it actually emits is blue.

It turns out the product is a Kickstarter fundraising scam. It netted an astonishing $2.7 million for its marketers. Some devices have shipped, but it appears that the way it works is you have to tell it what it’s looking at first. If you scan a peanut M&M but specify that it is a pain reliever, the device will tell you the main ingredient is ibuprofen. Sorry, but keyring spectrometers aren’t real either.

The SCIO quantum energy biofeedback device should also not be confused with another firm called SCIO Health Analytics. It appears to be a legitimate company, although its website is broken. DM