Tito Mboweni, the Marxist who wants to nationalise all land

When it was announced that ANC stalwart Tito Mboweni would be appointed as finance minister in the wake of the resignation of Nhlanhla Nene, the market reacted positively. It shouldn’t have. Here’s why, in Mboweni’s own words.

The resignation of Nhlanhla Nene as South Africa’s finance minister and the appointment of former South African Reserve Bank (SARB) governor Tito Mboweni in his place were announced in the early afternoon of Tuesday 9 October. Before the announcement, the rand was trading at a low of R15.04. By the next morning, it had strengthened to a high of R14.53.

Clearly, the markets liked the news that a familiar face would take over the Treasury reins. Perhaps they recall the country’s relatively reliable, if unspectacular, economic performance during the decade in which Mboweni was in charge at the Reserve Bank.

It is far from clear that there is any justification for venerating Mboweni, however. Now he is in charge of broader economic and fiscal policy, and his own words, in 2018, reveal quite scary policy preferences. The market won’t like what he has had to say.

When Mboweni took charge of South Africa’s monetary policy in August 1999, the rand was already a “one way bet”. It was trading at R6.17, but it was on a steep decline, from a high of R3.51 just after the 1994 elections, to a low of R12.44 at the start of 2002, more than two years into his governorship. If you bet against the rand, you couldn’t lose. Currency traders were loving it. 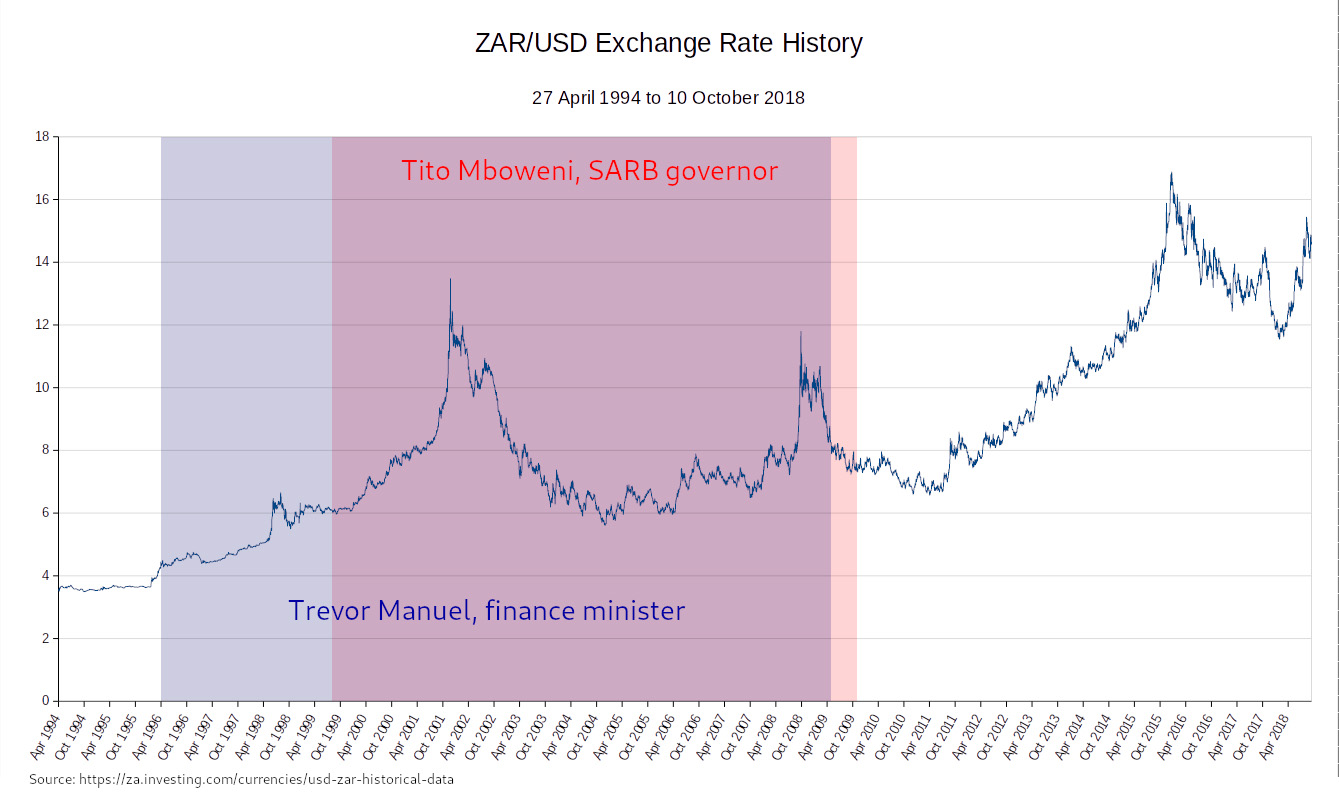 With each market crash – first dot com, then telecoms, and then the global financial crisis – the rand fell. In each case, Mboweni responded much like the rest of the world’s monetary policy chiefs did, by sharply lowering interest rates.

When he took office in 1999, the benchmark repo rate was at 12%. By the time he left in 2009, it was 7%. Easy money does make credit cheaper, which consumers generally appreciate, but it also has macro-economic consequences.

M3 money supply quadrupled in the time that Mboweni was SARB governor. This monetary inflation has the effect of taking money out of the pockets and savings account of the poor, and giving it to the rich, via bank credit, who invest it in stock markets, property and consumption. The markets love easy money, even though every easy-money boom is inevitably followed by a crash.

The currency traded between R6 and R8 to the dollar from 2003 to 2008, but it was very volatile. Although not a one-way bet any more, currency traders loved the volatility too. When Mboweni left office in 2009, the rand had recovered from the global financial crisis, and was trading firm at R7.54.

Mboweni only had control over monetary policy. A great deal of South Africa’s modest economic performance before the accession of Jacob Zuma in 2009 might instead be laid at the door of Trevor Manuel. He was finance minister under three successive presidents – Nelson Mandela, Thabo Mbeki and Kgalema Motlanthe – including most of Mboweni’s term as governor of the SARB.

Mboweni himself reminds followers to give credit, or accord blame, to finance ministers. 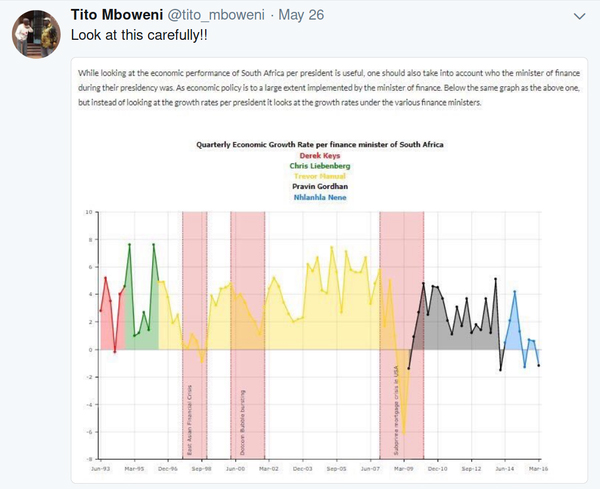 Manuel was responsible for implementing the Growth, Employment and Redistribution (GEAR) policy when he took office in 1996. It delivered a modest 3.2% per year of growth for the duration of his 13-year term of office. Unemployment increased, however, from 16.9% the year before he took office, to 23.7% when he left in 2009. It had been as high as 27.2% in 2002. GEAR also resulted in little by way of redistribution.

However, Manuel did oversee record-breaking tax revenues, the country’s first budget surplus in the bumper year of 2007, and increased spending on government services such as housing, sanitation and education. Global lenders were loving it. So were the poor. Taxpayers, not so much.

Mboweni’s successors largely continued his monetary policy in an attempt to stimulate the economy. Since 2009, interest rates have been as low or lower than any rate set by the Mboweni SARB. Even so, GDP growth dropped to an average of 2% per year and the rand collapsed as far as R16.88 in 2016. It is, perhaps, no wonder that the markets perked up at the appointment of a throwback to the pre-Zuma, Trevor Manuel era.

Mboweni is not a great fan of free markets. Besides a great love for food, his tweets in 2018 have demonstrated his hard-left economic and political colours quite often.

Many of his policy preferences can be summed up in a single tweet: let the state take ownership of 40% of mining companies, start a State Bank, reallocate land, and create a Sovereign Wealth Fund.

He explains where the wealth of the Sovereign Wealth Fund is to come from: the expropriation of shares in companies by means of “free carry” conditions. He also elaborates on the scope of the State Bank he would like to see. 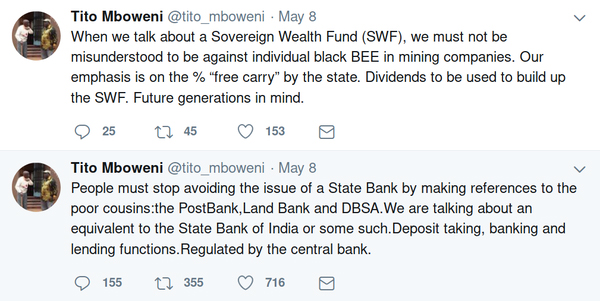 All of these ideas are quintessentially statist and socialist. Why the market would love them, unless they become crony beneficiaries of the state’s investments, is anyone’s guess.

Mboweni expresses a classically Marxist view on land. It must be owned by those who work it, he says.

When COPE leader Mosioua “Terror” Lekota declared his opposition to amending the Constitution to permit property expropriation without compensation, Mboweni went on the attack.

Not long ago, he declared support for solving the land question by ceding all land to the state, which would then allocate it to “Kings and communities, farmers, Municipalities, etc”. This aligns his views on land with those of the hard-left Economic Freedom Fighters (EFF).

He frequently jokes about expropriation without compensation, as if it isn’t a serious issue that will fundamentally change power relations between the state and the people, and could have grave consequences for both the economy and for race relations in South Africa. 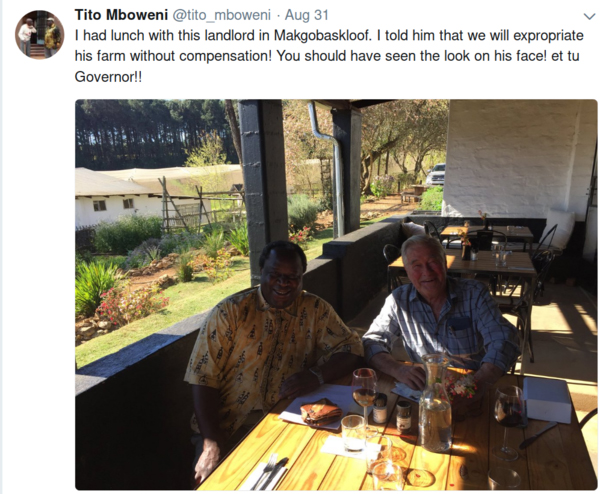 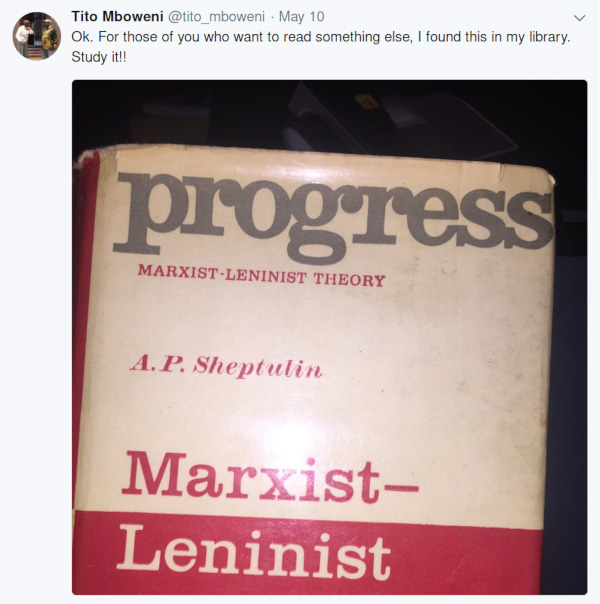 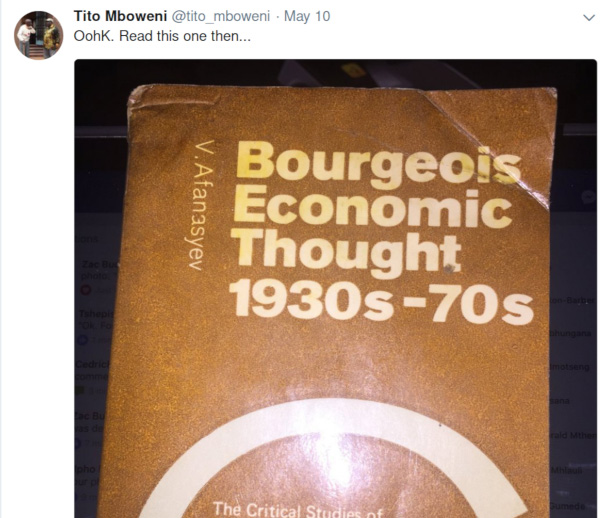 Sometimes, Mboweni seems quite wise, like when he tells leaders not to stubbornly refuse to go, but to go in good time.

Then he contradicts himself by extolling the virtues of Paul Kagame, the president of Rwanda, who took office in 2000 and remains in charge today. In 2015, he got his country’s constitution amended to limit presidents to two terms of five years each, but the amendment explicitly excepted Kagame himself, making him eligible to rule Rwanda until 2031. 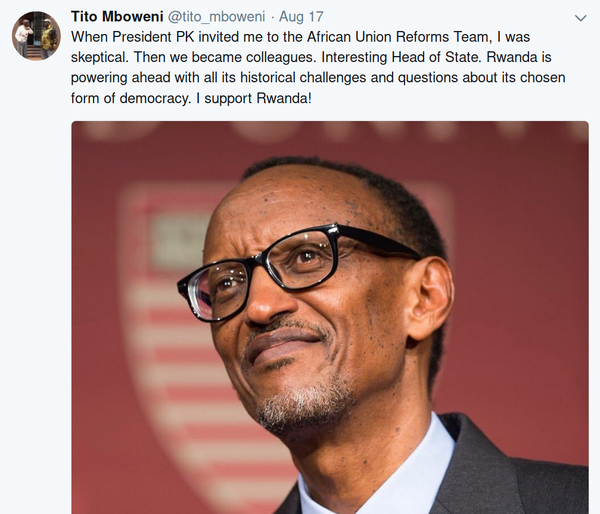 What Mboweni fails to mention is that Rwanda’s “chosen form of democracy” involves the banning of opposition parties, the imprisonment of opposition leaders, 97.5% election turnouts, winning elections with 93% of the vote, and winning referendums on remaining in power by 98%. Nowhere do politicians get percentages like this, except in strongly authoritarian states.

Human rights organisations have repeatedly raised concerns about repression, the murder and attempted murder of journalists and opposition politicians, and the absence of competition in elections, but Kagame just shrugs it all off as no problem. Whatever this is, it is not democracy.

Given Mboweni’s stance on the nationalisation of land, it is no surprise that Mboweni would like to see EFF leaders Julius Malema and Floyd Shivambu return to the ANC.

He does not believe, as some do, that the EFF is fascist. Notably, he disagrees with the party’s modus operandi, but he stays silent on its policies.

Some months later, there is an oblique reference to the EFF as wishing to impose Venezuelan policies on South Africa. He criticises the country for “destructive and outdated macroeconomic populism”, before clarifying that American sanctions are also to blame for that country’s socialist catastrophe.

Mboweni is often this inconsistent. A week after he contemplated the idea that former president Jacob Zuma might step down in response to the weather…

… he appears to hold him in high esteem again. 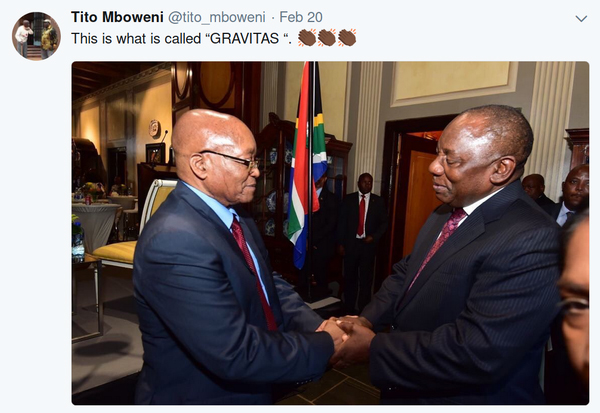 Although he champions not only land redistribution, but total nationalisation of land, he also recognises the failures of land reform. 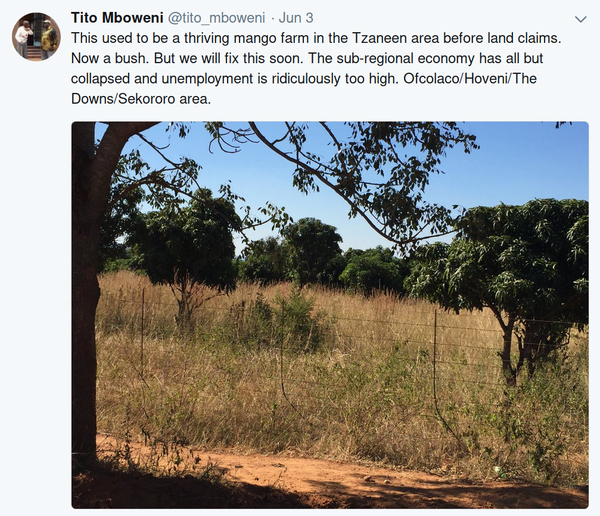 When he is not calling for the expropriation or nationalisation of land, he extols the virtues of ownership and title deeds.

While he recommends Marxist theory, in theory, he brags that he escaped high electricity tariffs by installing solar power at his farm, like a wealthy member of the haute bourgeoisie. As if ordinary South Africans have the capital to invest in liberating themselves from the depradations of the all-powerful but incompetent state. 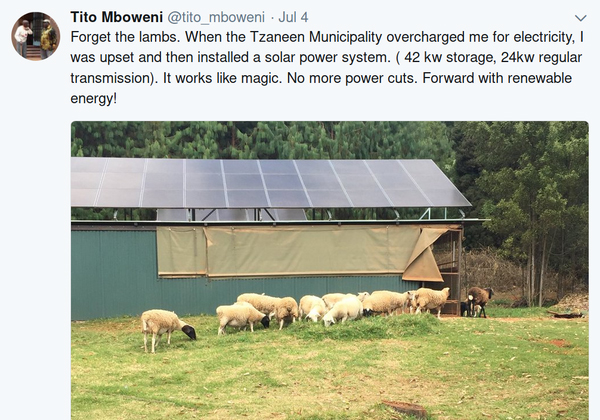 There are, of course, many positive notes in his timeline. Mboweni seems to have a genuine enthusiasm for successful black farmers and enterpreneurs, a deep love for his home town, his province, and his country, and a great appreciation for African art and music.

On the policy front, Mboweni responded to an article by a central banker proposing that it is time to scrap central bank independence by saying that he disagrees. Its current, private ownerhip is harmless, he says, and public ownership won’t change a thing.

On SAA, Mboweni thinks it should be shut down, with the pieces to become majority-owned by private investors.

His response to an incident with an apparent racist was somewhat worrying, with a threat that “we might need to re-evaluate our non-racial stance”, but in the end, his better judgement won. 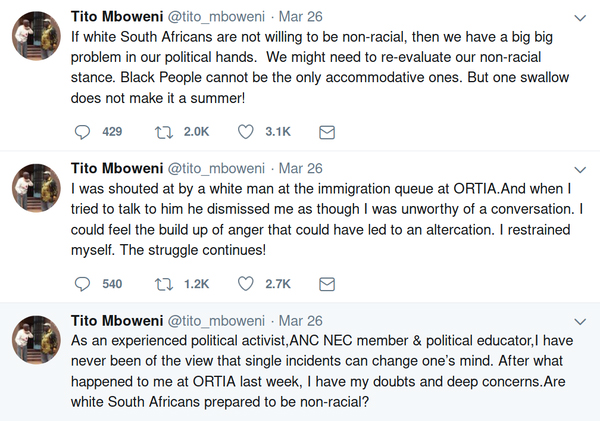 In general, he remains committed to non-racialism, and opposes the divisive identity politics of the younger generation. 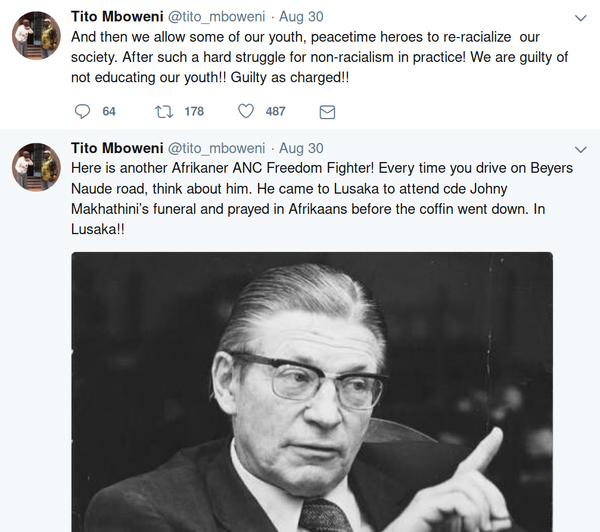 And amusingly, he began the year with a dig at Zapiro, over his “green shoots” cartoon hailing the president-to-be, Cyril Ramaphosa. 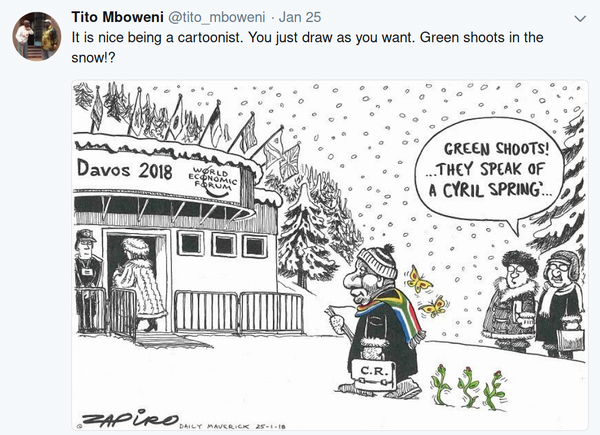 Mboweni didn’t get the point, of course. He joined in the Ramaphoria with gusto.

A few months later, he too saw the green shoots.

But for those who weren’t overcome with Ramaphoria, and have become disillusioned by the country’s economic performance under his leadership, Mboweni’s incredulity about green shoots in winter has aged well. Sadly, with a committed Marxist at the Treasury, it will remain winter for a long time to come. Perhaps the markets need another wake-up to reality. DM