Bridges to nowhere: the fallacy of public works projects

The tender for the second of two mega-bridges on the proposed N2 Wild Coast toll road was awarded last month. Costing a combined R3.3 billion, they are built on an as-yet non-existent road and the dubious belief that public infrastructure investment boosts the economy.

When Cyril Ramaphosa became South Africa’s president and delivered his first State of the Nation Address in February 2018, I wrote that it was quintessentially socialist.

“Cyril Ramaphosa”, I concluded, “will not be South Africa’s saviour. He will lead it further into the mire of socialism.”

Well, we’re there, mired in the stagnation commonly associated with grand socialist projects. Granted, Ramaphosa inherited a turd, but his attempts at polishing it are failing.

The country is officially in recession, but growth has been at or about zero for several years. The fuel price is at an all-time record high. The rand is in free fall. Mismanaged state-owned enterprises are drowning in debt.

Gross wages are stagnant. The narrow unemployment rate is hovering near a 10-year high of above 27%. Another 10% of the labour force has simply given up looking for work.

The SA Chamber of Commerce and Industry’s business confidence index has been at its lowest ebb since the advent of democracy in 1994. Consumer confidence bounced as irrational “Ramaphoria” made everyone giddy in the first quarter of 2018, but has been flagging again in the second quarter.

Skilled people are leaving the country in droves, and this time they include black professionals. The poor and largely unskilled masses, of course, have no choice about where they’d prefer to live. If the country sinks, they’ll be left in steerage to drown.

The Economist says there are no quick fixes for South Africa’s economy, and it called Ramaphosa’s recently announced economic stimulus plan “meagre”. Bloomberg worries that the ANC often argues for economic policy measures that have failed in many places, “including Venezuela”.

Part of the economic stimulus that Ramaphosa announced is to spend R400-billion on infrastructure over a three-year period. But infrastructure spending has been in the National Development Plan for years, and most of this funding was already in the budget. Perhaps he was hoping that merely naming a relatively large figure that was already to be spent would come as a pleasant surprise to investors and spur the listless economy into some sort of action.

An example of this kind of infrastructure spending is the N2 Wild Coast toll road, which was first proposed in 2003, and finally approved in 2015. It is one of 18 Strategic Integrated Projects under the auspices of the Presidential Infrastructure Coordinating Commission. 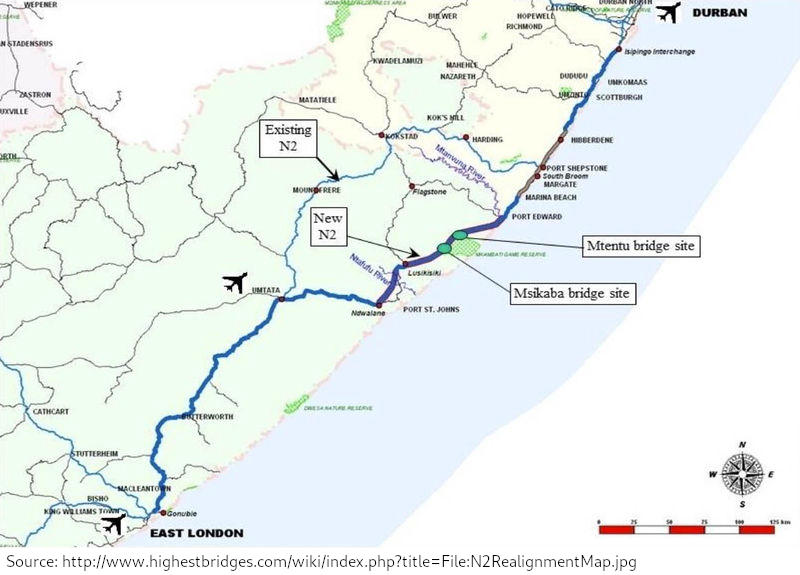 It sports two flagship bridges, crossing the Msikaba and Mtentu rivers about halfway between Port St Johns and Port Edward. Tenders now having been awarded for both of them, it turns out that the bridges alone will cost R3.3-billion, significantly exceeding their originally planned cost of R2.5-billion.

In 2007, the original cost for the entire 85km project, bridges included, was to be R6.4-billion. More recently, a Sanral spokesperson said the rest of the road, bridges excluded, would now cost between R5-billion and R6-billion. That means the entire project could cost up to R9.9-billion, and costs have gone up by at least 40% between 2008 and 2016, before a single site had even been cleared.

The original cost-benefit analysis estimated a financial benefits-to-costs ratio over 30 years of 1.31, so even a 40% increase in costs wipes out the financial case for the road and its fancy bridges.

The bridges themselves will be spectacular. The Msikaba bridge will reportedly become the longest cable-stayed bridge in Africa, and the Mtentu bridge will reportedly become the highest bridge in the southern hemisphere, eclipsing the Bloukrans river bridge by three metres. It will also be one of the longest main-span-balanced cantilevered bridges in the world. 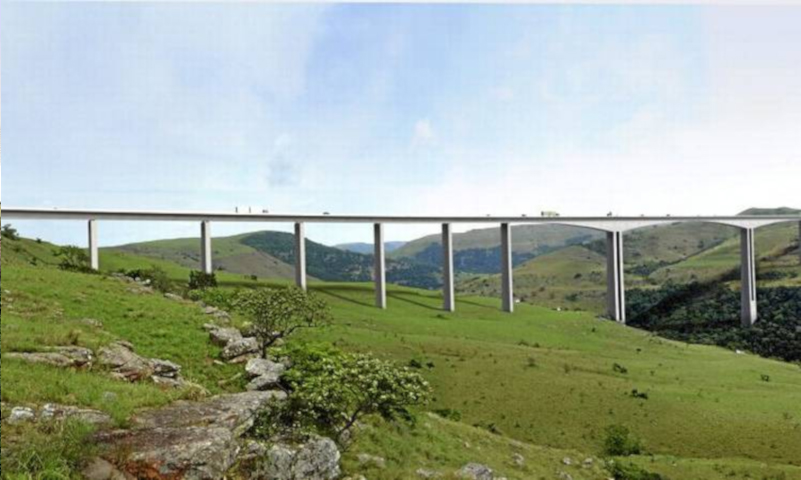 But vanity is not a good reason for spending taxpayer money (or toll fees, for that matter) on infrastructure. These bridges are quite literally in the middle of nowhere. They will shorten the N2 journey between Durban and East London by 76km, but other than that, there’s a lot of irony in the fact that the country’s two most expensive bridges — if they’re ever completed — will be located in one of the poorest, most remote regions of the country.

You’d think you could go to the Sanral website to find information on the progress of its major projects, but no. Most of its project pages, including that for the N2 Wild Coast toll road appear to have last been updated in 2009 or 2010. While it spends hundreds of billions on infrastructure, it can apparently not afford to hire a few website admin staff. Or, which is more likely, its website staff are drawing a generous salary for doing very little indeed.

Perhaps Sanral is too busy building bridges to bother with an informative website, but pretty much every project is over deadline and over budget. In its most recent Annual Performance Plan it blames a host of factors, including “resistance to private funding”, the state of the economy, “funding constraints”, project disruptions by local communities who aren’t getting the jobs they were promised, “other parties over whom Sanral has no control”, “delays in approvals”, “legal action against the projects”, and the impact of the failed e-tolling strategy for the Gauteng Freeway Improvement Project.

The government believes that infrastructure investment plays “a critical role in the economy, both as a direct provider of services and as a catalyst for higher employment-creation, inclusive economic growth and trade competitiveness.”

“We have got a recognition that unless the government moves, no one else is going to move in this economy,” public enterprises minister Pravin Gordhan told the SABC last month. “The government is prepared to lead, act as a catalyst, provide funding.”

In his 2016 medium-term budget policy statement, Gordhan, who was then the finance minister, committed to fund the N2 Wild Coast project, and cited it as an example of “inclusive economic development”.

In Parliament in 2010, the then minister of transport said: “The positive benefits … of the project are providing access to an area of South Africa that has virtually none, thereby unlocking the developmental potential of the Eastern Cape and the Pondoland area, in particular.”

This claim, however, depends on exceedingly optimistic assumptions, such as an economic multiplier effect of between four and six, which the government’s own economic assessment says seldom happens with road infrastructure, and attracting 1.4 million tourists to the region a year, which is almost as many as the annual number of visitors to the Kruger National Park, South Africa’s star attraction.

Of course, the N2 Wild Coast toll road has been dogged by all the controversies one would expect. Initial plans to toll Durban and KwaZulu-Natal south coast commuters to pay for 31% of the road had to be called off because of opposition among businesses as well as both local and provincial governments.

Local communities claim not to have been adequately consulted about the project. The Organisation to Undo Tax Abuse (OUTA) has accused Sanral of fabricating evidence in its disputes with those communities. Environmentalists are up in arms too, of course.

The activist group Sustaining the Wild Coast commissioned independent economists to reassess the viability of the project. They found that it ought to be shelved, since the original economic assessment conducted in 2007/8 is out of date and no longer holds true. OUTA contributed to the cost of this reassessment, and also opposes the project.

The activists are in large part worried about the accessibility of the Wild Coast to titanium miners, which could bring substantial economic benefits to the region, but might threaten tourism and the environment. Some are calling it the “road through Pondoland that nobody wants”.

This is starting to sound suspiciously like exaggeration of the truth, if it is true at all. I don’t trust the government, but I also don’t trust environmental activists to be objective about infrastructure projects of any kind, nor do I trust the environmental rights attorneys or the economists they pay.

But the real trouble is that the anticipated economic benefits of public infrastructure investment are speculative, at best.

It seems intuitive to suppose that public infrastructure investment would support economic growth. After all, the private sector uses and benefits from at least some of those capital investments.

This suggests that some infrastructure projects are justifiable, but some are simply too expensive and ambitious, and will not have the desired positive impact on the local economy.

A more recent study in the Oxford Review of Economic Policy, by Atif Ansar et al., considers the infrastructure boom in China. There is an obvious correlation between that country’s economic growth and its gigantic infrastructure investments. But is there a causal link, or is China growing despite the state’s over-investment in infrastructure?

“The prevalent view in economics literature and policies derived from it is that a high level of infrastructure investment is a precursor to economic growth,” the authors write. “China is especially held up as a model to emulate… Based on the largest dataset of its kind, this paper punctures the twin myths that (i) infrastructure creates economic value, and that (ii) China has a distinct advantage in its delivery. Far from being an engine of economic growth, the typical infrastructure investment fails to deliver a positive risk-adjusted return. Moreover, China’s track record in delivering infrastructure is no better than that of rich democracies.”

They continue: “Investing in unproductive projects results initially in a boom, as long as construction is ongoing, followed by a bust, when forecasted benefits fail to materialise and projects therefore become a drag on the economy. Where investments are debt-financed, overinvesting in unproductive projects results in the build-up of debt, monetary expansion, instability in financial markets, and economic fragility, exactly as we see in China today.”

Cyril Ramaphosa has often said that China’s communist president Deng Xiaoping is an inspiration. Deng, who ousted Mao Zedong’s chosen successor and ruled as the country’s “paramount leader” from 1978 until he retired in 1989, opened up the country’s failed communist economy to foreign investment and limited market-based reforms.

Deng would have loved the idea of building an expensive new highway and world-class new bridges to a region that is desolate and mired in poverty, in the hope of turning it into an economic miracle.

Ramaphosa lacks Deng’s autocratic powers, although he does not lack Deng’s central planning instincts. He cannot dictate outcomes, instead of spending other people’s money on vanity projects. Even if he was, however, the economic evidence suggests that most big infrastructure projects only drag the country further into the socialist mire. As expected and right on cue. DM