Consumer imports under attack from SARS

The Customs and Excise division of SARS has reportedly started to enforce an absurd regulation that says anyone who buys more than three consignments a year from abroad must register as an importer. This benefits existing importers, but is a dead loss to the economy as a whole.

It is not easy to import or export goods to or from South Africa. Would-be traders must comply with 754 pages worth of Customs and Excise Act, as well as eight associated schedules.

The introduction to Schedule 1, which contains “general notes”, is 315 pages long. Part 1 of Schedule 1, which covers ordinary customs duties, comprises 99 chapters and 670 pages. Schedule 10, which specifies the various trade agreements South Africa has with other countries, is made up of 3,517 pages.

In total, the country’s customs regulations add up to 5,573 pages of documentation. And ignorance of the law is, of course, never a defence.

As recently reported by Wendy Knowler, consumer journalist at TimesLIVE, these rules say that if you import more than three “consignments” from overseas in a single calendar year, you must register with SARS as an importer. The same is true if you order anything worth more than R50,000.

To register as an importer is a little bit tricky. You cannot do so as a private individual. You have to establish a company with the Companies and Intellectual Property Commission. This is a non-trivial exercise.

When your company has been registered, you need to head back over to SARS, and download application forms DA185 and DA185.4A1. No, the latter is not a part of the former. Unfortunately, the SARS link to the former does not work, so you need to do a search to find a link that does work.

At this point, you’d probably like to think that you’ve jumped through enough hoops to buy, say, your fourth book of the year. But no, SARS will laugh in your face.

Then, you need VAT, IT, PAYE, SDL and UIF letters from SARS. That alphabet soup stands for value-added tax, corporate income tax, employees’ pay-as-you-earn tax, the skills development levy, and unemployment insurance fund. You need letters from SARS confirming your registration for all of the above. This requires lots more forms, of course.

Once you’ve done all that, you need a telephone account older than three months, to prove that you have existed for a while and can be contacted. You need a cancelled cheque or certified copy of a bank statement, and a letter from the bank on a bank letterhead proving that you own your account.

You must also have a permanent address – no poor people need apply – and you must be older than 21, because we wouldn’t want school pupils or students buying dangerous books from overseas.

Your average government bureaucrat probably thinks only rich people order things from overseas, and who cares about rich people. But this is not true. Many people trade things on international auction sites. They run little businesses like that. Some people import things that aren’t available locally, such as certain books, clothes or technology items. There are numerous reasons consumers might want to import things. Mostly, they come down to lack of local availability, or higher domestic prices.

I ordered some of the things I needed for my recent wedding from overseas, for example. Little did I know I was actually supposed to register a formal company just to arrange my own wedding.

Instead of becoming an importer, you can, of course, buy from a local company that is already registered with SARS and will import the goods you want on your behalf. But that means you are limited to what local companies are prepared to order. Forget about bidding on eBay, for example, or buying from niche websites.

Even if you can get what you want, you’ll pay a massive surcharge because the importing company takes a profit, and they have you over the proverbial barrel because government has made it almost impossible for customers to order simple consumer items from abroad.

High trade barriers protect incumbent importers, at the expense of consumers. Some bureaucrat may have been convinced, probably by commercial importers, that making consumers pay an extra amount to local importers is good for the economy. After all, those importers make more profit, and could, in theory, employ more people. But this is a fallacy.

The money that consumers will now have to pay to local importers is money that they can no longer spend in some other way. It is therefore a dead loss to them.

The problem with this thinking is similar to the classic broken window fallacy. The parable was devised by Frédéric Bastiat in an essay written in 1850, entitled That which is seen, and that which is not seen.

In the parable, a shopkeeper’s son hurls a rock at his father’s window. Some observers believe that the boy has actually done the local economy a service, because the father must now pay a glazier to replace the window. This is the first-order economic impact that they do see. In fact, this is the effect that is recorded in GDP. It counts replacing things that were destroyed as if it were beneficial economic activity, no different from buying or creating new things.

If this were right, however, it would benefit the economy to destroy things. The more that gets destroyed, the more needs to be replaced, and the more economic activity is recorded. That is, of course, absurd. Anyone (except Paul Krugman, who thinks the destruction of war is awesome for economies) can see that overall wealth is reduced when capital is directed towards replacing broken things, rather than invested in building new things.

What observers (and government statisticians) do not see, is that by reducing the father’s disposable income, the boy has rendered him unable to buy a new pair of shoes. If he had done so, the economy would have been stimulated just as much as he paid the glazier, except that the benefit would have gone to the cobbler, and that the father would not have suffered a dead loss; he would have gained a pair of shoes.

Reducing trade barriers – which can consist of explicit tariffs, bureaucratic red tape, or restrictions on imports – usually does reduce sales by domestic producers, and reduces tariff revenue to the government. These are very visible effects, especially since the former may lead to job losses. They are what Bastiat would call “that which is seen”.

As the chart below shows, the overall increase in the consumer surplus resulting from lower import prices exceeds the combined losses of both producers and the government, which means the general welfare is increased by lower trade barriers. 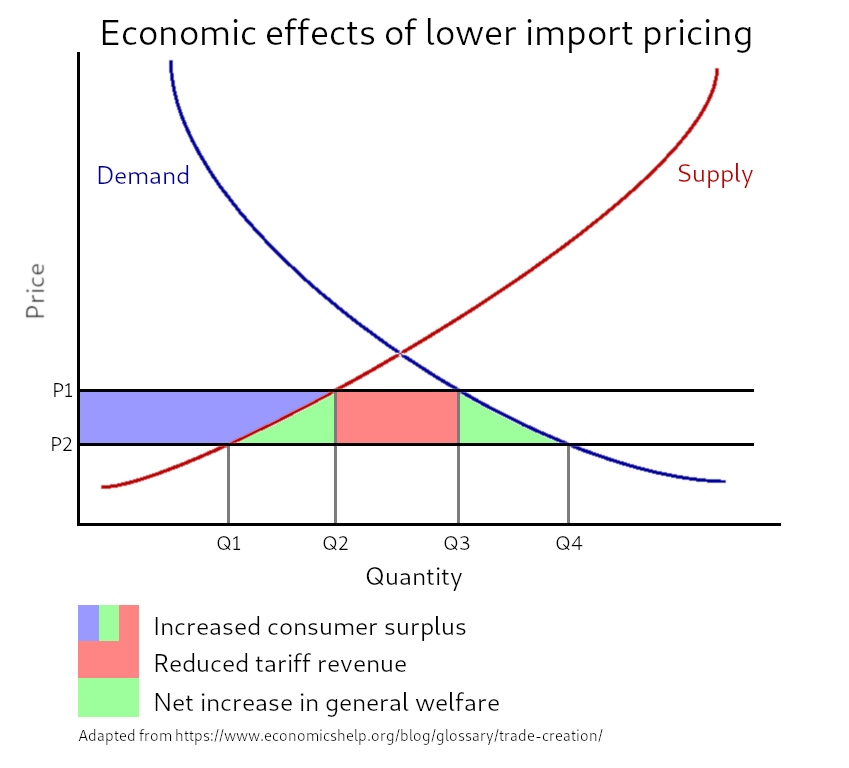 Absurdly, a non-price restriction such as the SARS rule under discussion benefits domestic producers and importers by limiting competition, but actually reduces government tariff revenue because it reduces overall imports.

As policies go, this isn’t only economically wrong-headed, it is fiscally stupid. It slows down economic activity, increases consumer prices, transfers wealth from consumers to business, and doesn’t even bring in tax revenue.

It reminds me of the failed attempts at national self-sufficiency of the apartheid government, to which it was driven by international sanctions. Consumers had a terrible time of it. Local producers had no incentive to improve their products, because foreign competition was highly restricted. Local consumers didn’t have the choices that foreign consumers did. They paid far higher prices than they needed to. They’d get stuff months, or even years, later than the international market. South Africa was a backward and economically stunted country as a result.

If their business grows big enough, they’ll want to register a company anyway, which will have to comply with all of SARS’s rules and regulations. But requiring someone to establish a company and register for every conceivable tax just for exceeding three annual consignments harms bona fide consumers and kills would-be new import businesses in the cradle. Which is just how high-priced, inefficient local producers and importers like it.

It seems SARS is quite happy to take the country back to the bad old days of crippling international trade. South Africa will be poorer for it. DM