Challenging the case for plastics over paper

Henry Coppens holds a BSc, Mechanical Engineering, BSc Chemical Engineering, MSc Chemistry, all KZN university, Durban; MBA (Wits business school), BSc Hon environmental science (Pretoria); BSc Climatology and Meteorology (Unisa). He has worked in the pulp and paper industry in the area of sustainability, energy, water use, emissions and solid waste and issues relating to sustainability since 1998, retiring in 2015 and prior to that in the diamond research industry with De Beers.

For anyone wanting to do their bit against climate change, consuming paper products is a very simple and effective way. After all, the more paper we use, the more trees have to be planted, the more carbon in the atmosphere gets prevented from doing global warming harm. Unless plastics are 100% recycled worldwide, a virtual impossibility, they will continue to harm the planet.

Although I would agree with most aspects in Ivo Vegter’s article in Daily Maverick on 14 August, some points need challenging.

First, and perhaps the most important, is that the carbon in plastic comes from coal and oil and adds to the above ground carbon burden of the planet, whereas paper and cotton use and remove above ground carbon, in these cases the carbon from the atmosphere – thus also helping to alleviate the effects of anthropogenic greenhouse gases. Life Cycle Analyses do not often taken into account the source of the carbon, if they deal with it at all. These facts alone should obviate the case for plastic bags, especially given the attention that plastic pollution of the oceans is currently receiving.

Both carbon and plastic can and are recycled. The concern is that which is NOT recycled – which then enters land fills, rivers, and ultimately the oceans. For plastic this quantity is vast and is greatly aggravated by the fact that plastic takes over 400+ years to decompose. Unlike paper and cotton, during recent human life spans, very little plastic actually decomposes to its constituents. What happens is that it usually breaks down into micro particles that get taken in by all animal life especially marine life. Apart from the little that is burned – into highly carcinogenic compounds – all the plastic ever made is still around somewhere. Paper and cotton products decompose quickly – in a matter of weeks to one or two years, and simply return their carbon whence it came not adding to the carbon burden of the planet, as plastics do. So for as long as paper and cotton products exist their carbon is withheld from contributing to greenhouse gas accumulation.

The commonly used carbon accounting tool in the pulp and paper industry is that called the Forestry Industries Carbon Accounting Tool. Below are the results for the entire Canadian Forestry Industry. Data below the zero line represents carbon absorption, that above emission. The blue column on the right indicates that they are net absorbers of carbon (from the atmosphere). The results are from a report by the US National Council for Air and Stream Improvement (NCASI), a well-known and respected environmental organisation in the US. 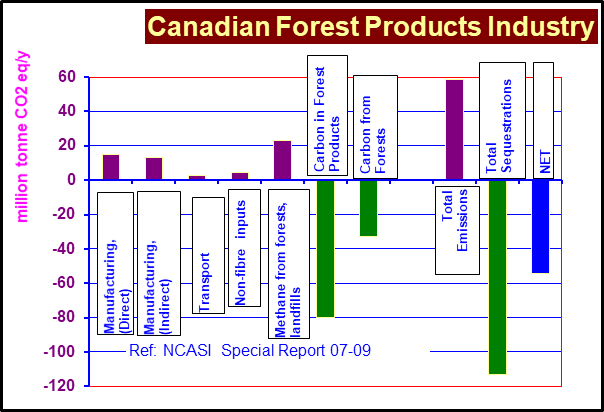 A similar one exists for the SA pulp and paper industry, but it is not quite as good, because a number of older SA mills use coal for some of their fuel. This is simply not the case for plastic, as its carbon is merely adding to the above ground burden.

Regarding Vegter’s comment that it takes more energy to make paper bags than plastic, what has been omitted is that, in many cases, the energy used comes from the pulping process itself and not from the grid or purchased fuels. Of course, this depends on the type and design of the paper mill. Older mills that produce fine paper do not use their recoverable energy at all – like SA’s Enstra mill (built in 1936) which makes fine paper and recovers no energy – since energy at the time the mill was built was cheap and was not worth recovering. They have coal boilers and draw power from the grid.

Modern kraft (German for strength) mills make high strength paper used for cardboard, newsprint, potato and cement bags and other high strength paper applications. This paper has been and is used for supermarket packets/bags. Modern kraft mills are well designed and run and will be net exporters of energy and so actually put power back into the grid. As an example see the sustainability report for Botnia Mill, Fray Bentos, Western Uruguay. They burn no fossil fuel (coal, gas or oil) other than a little at start-up, use forestry waste (bark and offcuts from the tree harvesting process – so a “green” fuel) and draw no power from the grid (again other than a little at start-up) .

When I was in Canada in 2004 I visited three such mills in the Prince George area of British Columbia. All are totally power and fuel independent. This is certainly not the case with plastic manufacture. SA now has two such mills that are net exporters of power – Saiccor and Ngodwana (see Sappi sustainability reports 2014 onwards). There is enough energy from forest harvested waste and in the spent pulping liquors to both concentrate the liquors and combust them for energy on the plants. There are many more such mills worldwide. However, there are many older mills that are net users of fossil fuel and power. Perhaps those are the ones chosen by the writer to make his point.

So if one uses these modern pulp and paper mills and compares them will plastic manufacture, there is no contest. Plastic manufacture has no choice but to draw power from the grid and combust fossil fuel for its energy needs.

There are other environmental issues – like water use, solid waste, especially coal ash in coal-burning process – common to both paper and plastic. The Sasol 2 plant uses mostly fossil fuel: coal (and recently a little gas) to make raw plastic products. It has a large solid waste dump from coal ash (SA coal is 40% ash) , sophisticated water treatment plant and produces huge emissions (which include CO2, a lot of SO2 for acid rain, and particulates) from the coal, which is not only converted for its carbon use in plastics but to run coal-fired boilers for steam and heat the fuel and plastic production process. Paper mills that burn coal have the same problem, but more and more are being converted to either gas or burning tree waste and/or starting to recover the energy in their pulping liquors.

So, it is clear from the above, for anyone wanting to do their bit against climate change, consuming paper products is a very simple and effective way. After all, the more paper we use, the more trees have to be planted, the more carbon in the atmosphere gets prevented from doing global warming harm.

Unless plastics are 100% recycled worldwide, a virtual impossibility, they will continue to harm the planet. DM